Helena Kontova: You lived for almost a year in Germany, in Berlin. How was this experience and your relationship to the artists and the culture of the city?

Maurizio Cattelan: First of all, I didn’t have this experience alone. Unlike most curators, Ali, Massimiliano and I did not run all over the world in search of mysterious names and unknown faces to put together the 4th Berlin Biennial. Instead, we focused on the idea of planting solid roots and establishing connections with the city of Berlin and its region: we opened a gallery a year before the exhibition and we developed the majority of our research in Germany. Most of our traveling was done by train. If you look at something for long enough, anything can become interesting. Even the smallest and most insignificant detail can include a whole world.

HK: From New York to Berlin, which is to say, the cultural hotbed of the good old US of A to the fragility of old Europe: how was this change, and what differences did this change entail?

MC: It looks like the good old US — as you say — has never experienced such a fear of crisis and a dread for failure as it is today. The dream has officially become a nightmare. Supposedly forgotten specters from the past, like economic crises, reappear every night with greater and greater force. Old Europe is facing a new conflict; the awareness of its limits in the West is fighting against the euphoria of all the new countries of the East, which have now definitively got their heads out of the sand. Art is never indifferent to such radical changes. Someone said that fights and battles never have winners, only survivors.

HK: You presented a series of six new works in your show in Frankfurt (at Portikus and MMK). This was a very important statement after almost two years without producing any new work. Why this long pause? And did Germany, with its history and memories, stimulate you in any particular way?

MC: Over the course of these last two years, I have had to fight against images. To curate a biennial and to present new works seemed like trying to backstroke swimming and to look ahead at the same time. But in the end, I decided to grin and bear it and to live it as if in forced exile, a challenge to the inevitable necessity to act, almost like a Zen exercise. In Russia they used to say that Berlin was the balls of the West, and if they wanted to make the West scream, all they had to do was kick Berlin. Fortunately, today no one wants to kick it or make it scream, but the screams of its past echo in every edifice and on the corners of every street. Maybe my new works resound within those screams, but I only reacted to a necessity. I am a vector, not a force.

HK: You curated a large-scale international exhibition in Germany, the 4th Berlin Biennial. Is there now a kind of overall understanding between Germany, German contemporary art structures and Maurizio Cattelan? Has the atmosphere and memory of the Third Reich stimulated in particular the sensibility and memories of the boy from Padua that you once were?

MC: The only connection that I can manage to think of between The Third Reich and Padua is the word “Rauss,” which I used to see written on walls when I was ynung without ever understanding what it meant.

Joking aside, there is no doubt that over the years Germany has expertly developed a rich network of museums and institutions, to the point that on almost every corner there is a gallery or space in which artists or anybody who wants to can show their work. I don’t think I have ever seen a similar urge in any other part of the world, there’s almost an over exposure of art, a magnifying lens constantly focused on the world, ready to reveal any contradiction or ambiguity. Today Germany  is something like an amplifier for the doubts and fears intrinsic to human nature. I feel good there, although I feel like running away terrified after a few hours. I guess fear is guiltiness’ tax on conscience.

HK: Don’t you think that the big, international museums, above all in the USA, but in particular the sponsors, often heavy and barely informed, can interfere with the work of commissions and become censors?

MC: Artists have never been completely free. Even the greatest of the past had to deal with the whimsical mood of their masters and whatnot to get by. Throughout history, though, there have always been some visionary and courageous outsiders, who trusted the artists even when they were lying. Besides, we’re all untruthful; we promise a bridge where there’s no river.

HK: You have worked on various continents and different countries. Where do you think your work is the most appreciated? Has your Italian (and European) cultural background created problems of comprehension for you?

MC: I think I have always had problems being understood, wherever I go, and still today I am surprised when people speak to me of success and appreciation. This is a position I have always had a difficult time accepting, independently of my so-called cultural background or the place in which I find myself.

HK: What is your Frau C. communicating to us, this slightly Nordic “epiphanal” woman, who from the top of the tree spreads her arms toward the world as if to embrace and save humanity? If La Nona Ora lays us down in the dust, do you believe that only your sainted woman, maybe the mother, can raise us up?

MC: I don’t know how much Frau C. is trying to save the human race or is trying to make us understand to what extent we are damaged. She seems like a revelation to me, a religious apparition. To tell you the truth, I still haven’t entirely understood if she is rising up to the sky or is slowly descending to the ground as if somebody had knocked her down. It is certainly a unique event, like one of those moments, as if by miracle, you suddenly realize how absurd what you have always eaten is and how useless what you have been saying for years is.

HK: If I am not mistaken, this is the first time that a woman has appeared in your work, at least in an almost triumphant way. Is woman therefore our hope for salvation? Has Maurizio Cattelan seen the light on the road to Damascus, this time a feminine light?

MC: Sometimes salvation comes from where you least expect it, it could be wading in a lake in Münster or welcoming visitors to a museum with a Georgia O’Keefe mask. In fact, women have always been the main character of my work. One of the last, for example, was a funny old lady stuck in a refrigerator, between the carrots and the mayonnaise. Maybe none of these works were triumphal, but still they were unexpected and uncanny images. After all art only works if there is someone who wants to be surprised.

HK: The arms that stick out of the wall, in an apparently festive public salute, are strongly evocative of the notorious Heil Hitler. What are the analogies, the differences. Is yours critical, parodic or supportive?

MC: Images are always ambiguous. I have always worked with their uncertainty, resisting to any temptation to tell any absolute truth. But to give a straight answer to your question: critical and parodic for sure. The raised arm for is for me an extraordinary symbol of power, an erection in potential but also the absolute suspension of judgment. No one has ever succeeded in understanding where the Roman salute comes from and who invented it, but the doubt hasn’t divested it of its force throughout time. In the end, if I have to choose between two evils, I’ll always take the worse.

HK: If men lose their bodies and keep only their hands for some nostalgic gesture, the horse loses its head but keeps its whole body: what perverse law of an eye for an eye is hidden behind such strong images?

MC: What is really impressive is that the images you call strong to me are the only  moments in which I try to hide nothing. We all lose our head, and even worse, we always lose what we care about the most.

HK: Finally, the cake, a simple, super-appetizing cake: what’s the occasion? Or rather, is it just the icing meant to sweeten the tragedy of life?

MC: I have never liked celebrations. Art should be our daily bread, not just a cake for special occasions.

(Translated from Italian by Chris Sharp)

Helena Kontova is the Editor of Flash Art International.

Maurizio Cattelan is an artist based in New York.

In 1991, a conversation appeared in the Czech magazine Vitvarné umení (Visual Art) between Jirí David and a colleague of…

In a recent conversation, the French dancer and choreographer Jérôme Bel articulated a distinction between the ‘fine arts artist,’ or… 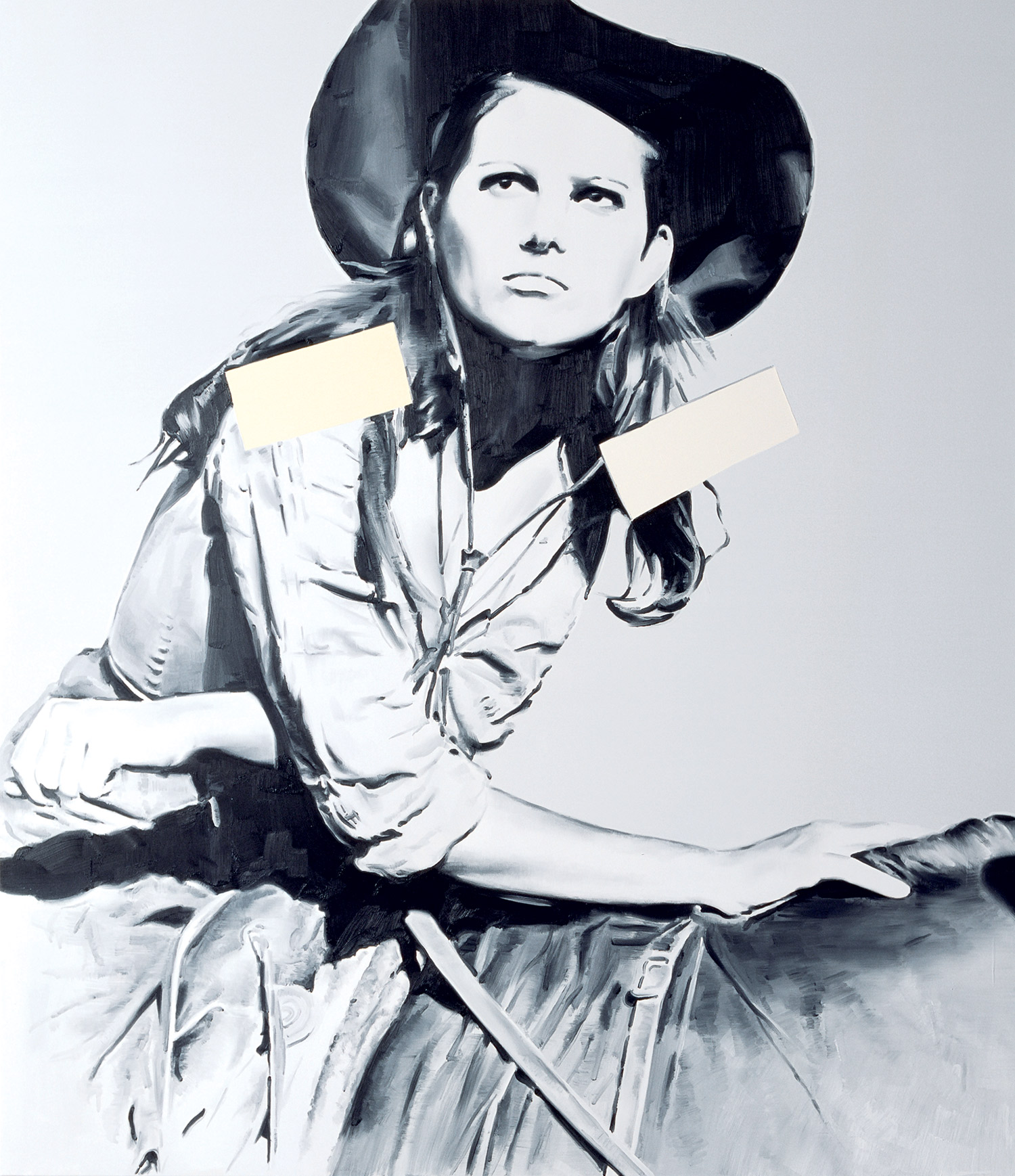