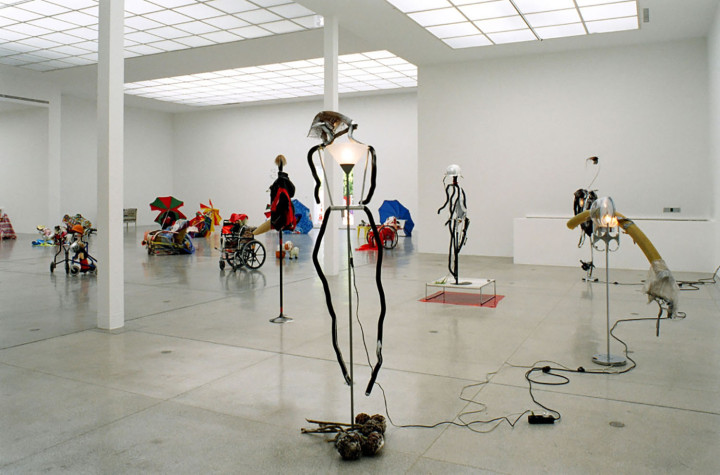 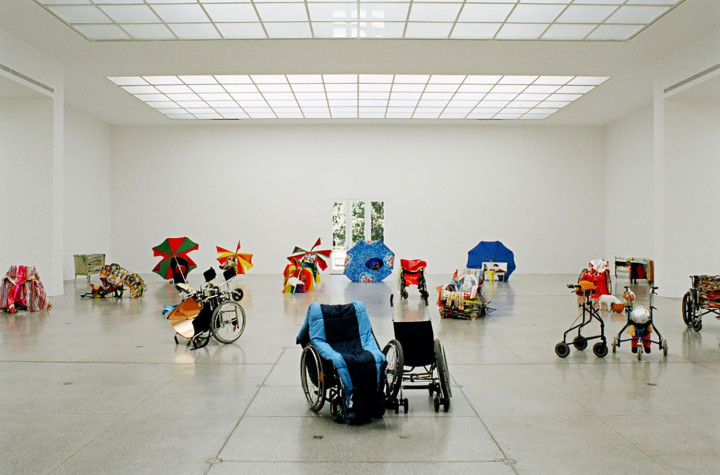 The art student was shocked. The carefully prepared presentation collapsed under a surprisingly simple if not quite obvious question the visiting guest professor posed: Why do your paintings look like those of a fifty-year-old man? Why would a well-educated young artist want to emulate the historic gesture of a different generation?

Today, what strikes me in Isa Genzken’s work is exactly what Tino Sehgal ridiculed in his contribution for the German pavilion in Venice, the dancing wardens and their hysterical chit chat of “This is so contemporary.” Today this is what I greatly admire in Genzken’s work, the way it is there, with a resonating presence, and that it is so obviously not classic, not imposing, not spectacular, and indeed contemporary. In fact the work of this fifty-year-old artist appears more youthful than most of what much younger artists produce today. Full of disparate, if occasionally idiosyncratic elegance, it is armed with a charming ridiculousness and ruthlessness, effortlessly pairing minimalist purity with decoration, in rickety assemblages of everyday souvenirs, featuring precise spray-paint attacks on high-design objects, all stacked hideously on high white plinths, allowing a weirdly playful improvisational streak to shine through with narrative fragments and careful constructions. Sculptures they are, but of parts that stubbornly reclaim their place; they never really come together and instead remain instable. Probably the most precarious work the artist has ever produced.

However another piece comes to mind, in all its clarity, scale and composure — quite the opposite of her latest work: a five meter high, thin, high-grade steel frame entitled Camera, from 1990. Very much a private work, but by leaning dangerously from a private, third-floor balcony, it assumes public significance, referring not only to the rectangular modern architecture and the context it is placed in, but also the frame of a camera’s viewfinder, the frame that directs the eye. Seen from street level in Brussels, this piece looks like a rather suicidal sculpture, on the brink of falling. What is striking in it is the way the world is split into what is inside and outside of the frame, just as the viewer’s perspective is split into the private looking down, like the viewfinder of the camera, framing the public, and the public perspective, of the passerby, looking up, threatened by the potentially dangerous tilting metal frame looming over him.

The concept of a point of view, a perspective, an act of framing on account of the viewer is as evident in Camera as it is in the Window sculptures presented in the solo show at Frankfurt’s Portikus in 1992 — a traveling exhibition with other stations in various places, among them the Renaissance Society in Chicago — with the evocatively shimmering and metaphorical title “Everyone needs at least one window.” These sculptures — single, doubled or quadrupled frames of reinforced epoxy-resin casts, sometimes on the skinny stilted pedestals familiar from her earlier concrete pieces — deal with openness and closure, with transparency and translucency by revealing their inner, supporting structures, plain, steal-wire mesh or grids. Their framing constructs an overlapping of inside and outside, resulting in a tautological short circuit, wherein layers of meaning reconstruct each other, and thereby expose with perfect conceptual clarity a notion of fragility that belies the ruggedness of the actual construction. Perhaps it is something about the idea of reinforcement as such that subverts the simplicity of the applied cubic geometry and its symbolic levels, appropriated by modern architecture, most notably since the Bauhaus. All these imposing cubes, rectangles and grids, with all their calculated reflections and transparency, imply classic, predominantly male values: straightness, clarity, resolve. So, consequently Genzken’s answer was “Fuck the Bauhaus,” the title of a group of works that are predecessors to her most recent body of work.

But Genzken’s concept of geometry has always been fluid — the chaotic elegance of her current works echoes the surprising volatility of her early, elongated ellipsoids and hyperbolas from the late 1970s and early 1980s. Today it appears difficult to believe that these forms were made before Photoshop. However, in a time dominated by hot “Neue Wilde” painting and a nearly all-male cast of more or less macho painters, Genzken, like Hanne Darboven before her, turned to the soothing coolness of mathematics and used computers for complex sinus-calculations to develop her suggestive abstract objects. Painted in bright colors, they are physical, but in a strange way also from out of this world. Scientific, nearly weightless and touching the floor at only one point, they hover in a precarious equilibrium. Like musical instruments or sporting equipment, say, surfboards, an abstract and impossible mechanical idea of functionality emanates from them, while they occupy their space less than they bend it, proving too big for any context.

Already this period shows the artist as a sculptor who aspires toward complex ideas and to wrangle the concept of sculpture from the hands of minimalists and take it to completely new places; this remains her game today. With great panache — or “with her almost Herculean ambition,” as Benjamin H.D. Buchloh said in an article published in Artforum) — Genzken managed to develop her practice inside of a specific historic vacuum concerning sculpture in Germany.

She was wedged between the overpowering ideas of minimal art coming from the US and the influence of the Düsseldorf scene, with the highly influential godfather Joseph Beuys and the rest of the Düsseldorf gang — from her former husband Gerhard Richter and his pals Sigmar Polke and Blinky Palermo to the then-upcoming generation of photographers, such as Candida Höfer and Thomas Struth at the famed Bernd and Hilla Becher school. Questioning the masculine notion of sculpture as such drove her to take upon her own shoulders the task of finding a new way to make sculpture all by herself. Without any predecessor, she went through the motions, and came up with one potent idea after another, ruthlessly discarding her approaches when she found them dissatisfying or no longer in accord with her vision, subjecting her works and ideas to rigorous and intense examination.

Given the mathematical precision of her early sculptures, the autonomy and tight rectangular rational at work in her concrete and frame pieces, her latest work looks like it has spiraled out of control: the artist’s hand is everywhere, the arrangements are overpowering, involving a surprising personal sensibility, humor, suggestions of adoration and campy seduction. Alluring from their pedestals, her concoctions come from the real world of the everyday and carry with them no irony but a comic touch, in the way that the cheap mass-produced perfection of her objects clashes with expensive design and artifacts. This is what happens for instance with a leporello by her Cologne-based artist friend Kai Althoff, which was draped around and woven into the structure of her sculpture Pope (2006) — shown in her recent exhibition of four stelae at her Berlin gallery Neugerriemschneider. The poignancy of mundane activities and their apparent contrast with modernist rationalism allows her to use a certain friction to portray a schizophrenic state of interference and exchangeability. Agilely mixing styles, high and low culture, she allows fashion accessories to comment on concepts about modernism, urbanism and sculpture.

Genzken invites the viewer to witness arrangements of residue from everyday life that turn into provisional hybrid forms — including toys, kitsch figurines, colored glass, souvenirs and other knick-knacks — that mount up into altar-like complexes, transcending the idea of experimental architectural models. They remain flexible, similarly influenced by the egalitarian strategies of punk and dada as well as scatter-art, gaining their momentum in the obvious pleasure taken in the campy qualities reflected in the abundance of shiny materials, glossy, transparent or reflective surfaces and the decorative metallic and glitter spray paint employed to add some extra sparkle and friction — “plenty of sand in the Vaseline,” to quote Martin Kippenberger. Indeed, Genzken’s precarious structures are reminiscent of Kippenberger’s Psychobuildings — a book featuring a series of photographs of existing architecture that question the either plainly idiotic or really psychotic society that created them. In a complex reversal, Genzken’s sculptures reflect more of an individual state of tension, caught between the perception from the inside and the outside, but are just as slapstick as they are psychotic.

In her New Buildings for Berlin, the relatively small slates of resin-encoated wire lean on each other like diminutive Richard Serra sculptures, and are often placed close to windows to emphasize their translucent character. It is precisely here that her metaphorical gesture, informed by a lightness, the allure of the surface, the way of arranging and placing her work, prevents her from producing what could be defined as ‘painting,’ thanks also to the combination of extremely diverse elements. Abandoning notions of order and finally power, they allow the viewer to relate to their human scale with their powerful symbolism of fragility, haphazardness and poetry. Things remain light, easy; the elements are barely held together by hot glue, adhesive tape and cling-wrap. No weightiness, no imposing form, but a distinctively anarchist DIY idea.

Similar to the catastrophes of painting technique that are the trademark of much bad painting, the clashes in Genzken’s work are part of her narrative, unfolding simultaneously on many symbolic, metaphorical and allegorical levels. The world she shows is falling apart, it can’t contain the things in it anymore, because implicit notions of structure and order have become obsolete.

Andreas Schlaegel is an artist and a critic based in Berlin.

Isa Genzken was born in 1948 in Bad Oldesloe, Germany. She lives and works in Berlin.

Andro wekua’s work combines a seductive and terrifying sense of composition, which seems to be walking in its sleep, with…

Maurizio Cattelan: I want to start with something you said to Mery Nonha regarding your film Shadows on The Façade…