Maurizio Cattelan: I want to start with something you said to Mery Nonha regarding your film Shadows on The Façade when you were shooting at the Iberia Hotel. Can we talk about it?

Andro Wekua: It was in the room number 402. Her face was pale and calm and smooth. It was 3 am.

MC: What was going on?

AW: All of us were sitting there, and more or less all of us knew that it was made up.

MC: Was Mery there as well?

AW: She was laid there and it was so good that everyone else could kiss her ass. I believed it.

MC: There was not much light at night for shooting.

AW: A chandelier was hanging there with seventeen light bulbs so we used it. People were out on the street and came to the hotel late, but we still managed to have enough shadows in the scene. And Mery loved this idea, and when you focus on an idea, even though it’s a fragment, it opens the door to other fragments that want to hook themselves to that idea, and away we went. And always before even working with fragments, pieces of this, a whole scene, but it’s not the whole. Then, when you see the whole and it’s not working, it’s another series of experiments to get the whole thing to work together and then there’s the mixing, sounds and music, and that alters things and…

MC: Is there much disparity then?

AW: In a lot of ways it’s very, very close. But usually, it’s more beautiful. It’s better than what you first imagined. Some scenes may be almost exactly as you imagined them; because to find locations that weren’t exactly the locations you had in mind, you know… there are differences. But the mood and feelings, since you have those original ideas to check back on, is usually fairly close… but, still, you know, because it wants to be the way it is, there’s always a feeling, a difference from what you first imagined.

MC: The windows were gone; the frames too?

AW: Well, dreams are hardly explained in a rational way, are they? You know, she has a Catholic upbringing, so there’s always the resonance of it in the dreams, or also in her behavior, in her acting. I don’t remember exactly what I wanted to accomplish then, but it’s too late, and I truly don’t think much about it. I would have to see the film again.

MC: How did you come to work with Mery Nonha?

AW: I was introduced to Mery and she squeezed my hand, gently enough. I was told to have a seat in Mery’s dressing room, and I took one. Mery concentrated her attention upon removing her make-up, allowing herself a furtive stare in my direction now and then, but saying nothing. I continued to sit. Three or four jovial henchmen then burst in to help create the confidential atmosphere so necessary to the revelation of marital secrets. Mery continued to maintain her enormous silence, but she paused in her business of cleaning up to join in a jig, started by one of her jovial henchmen. She shuffled and jumped there, silently, her face never altering a hair’s breadth from its habitual solemnity. It was grotesque. She might have been a marionette jerking on the end of her strings. But presently the three or four stout ones, hunger overcoming them, lumbered off in the direction of the restaurant. For the moment there was only Mery, her publicity man, and me.

MC: Where is she now?

AW: She has been sitting there ever since, unchanged. Only the sea breeze licking her face.

MC: She did not see herself?

AW: No, wet shadows only.

MC: I’ve heard that on the set of Shadows on The Façade you were always late. What’s your problem?

AW: You know a lot of people have, oh gee, real quirky problems that they wouldn’t dare let anyone else know about. But one of my problems happens to show: I’m late. I guess people think that why I’m late is some kind of arrogance, but I think it is the opposite of arrogance. I also feel that I’m not in this big rush, you know, you got to go and you got to go fast but for no good reason. The main thing is, I want to be prepared when I get there to give a good performance or whatever to the best of my ability. A lot of people can be there on time and do nothing, which I have seen them do, and you know, all sit around and sort of chit chat and talk trivia about their social life. Mery Nonha said of me, “When he’s there, he’s there. All of him is there! He’s there to work.”

MC: And what would you say about her in return?

AW: She was grandiose and very generous. Once I told her, “Mery, you look so elegant, what is it?” And she answered, “Ah, it’s the jacket… Oh, Yves Saint Laurent made this for me and I got it yesterday in Paris.” I said, “That is a wonderful jacket,” and she ripped it off her shoulder and threw it on me and said, “Now take it. It’s yours.” She would give away her car in a split second, just because she felt like giving me her car. Of course, I gave it back to her later.

MC: Where is she now?

AW: The last time I heard from Mery was through a letter that she wrote me. Do you want me to read it to you?

AW: This was a few years ago: “I’m starting to feel like I arrived here, and it’s already time to leave. You certainly understand what I mean. Actually, I really don’t know why I feel the urge to write you. A letter I wrote over the last few days was lost, somewhere in the streets of Tehran. Maybe it’s because I’ve never been so near your country, to the nameless street, that I’ve decided to do this. Or maybe it’s just because I haven’t written a word since more than a week now and I’m missing writing.

We drove — way too fast — through incredible mountains today. They seemed so fragile, as if they could collapse at any second. They were red, purple and saffron, covered with fresh green herbs. As soon as some clouds filled the sky, a rainbow appeared just in front of our car. Even the driver smiled at that point, for the first time after several hours of curving around between awesome valleys and blooming apple trees. I couldn’t get used to the black gloves he wore the whole time. With these he tried to hide and protect his hands, disfigured by arthritis and skin disease, but they just managed to make me feel uncomfortable. As for the trip that we never took, I never regretted not taking it as much as today. Actually, you cancelled it once, just a couple of days before we were supposed to leave, do you remember? I was pretty disappointed and pissed off. I never really understood why you suddenly changed your mind. You haven’t been over there in a while, isn’t that right? Aren’t you missing ‘home’? Maybe it’s too much to call it that after all these years, but on the other hand, how many people continue to see you as an exotica…

I think there are two kinds of people: the ones who don’t like to talk about themselves, and those who do — but the latter are the ones that don’t listen to themselves, when they’re saying something personal. In fact, I believe that you are an exception. You belong to neither category, but I don’t feel like inventing one just for you. I just need an explanation that is not an excuse. But I’m sure you know that I trust you, and maybe one day we’ll make it. I’m an impatient type, I know. Or maybe I just need to take off again.” No one has heard from her since, so she must have stayed in Iran.

MC: So, what was it that you said to Mery about the film?

AW: “We must talk in two days about our future plans,” I said as we swapped goodbyes, “We have so much to do. We can’t let this opportunity slip away.” It was after we finished the last scene.

MC: What was the last scene?

Marizio Cattelan is an artist based in New York.

Andro Wekua was born in Sochumi, Georgia, in 1977. He lives and works in Zurich.

Andro wekua’s work combines a seductive and terrifying sense of composition, which seems to be walking in its sleep, with… 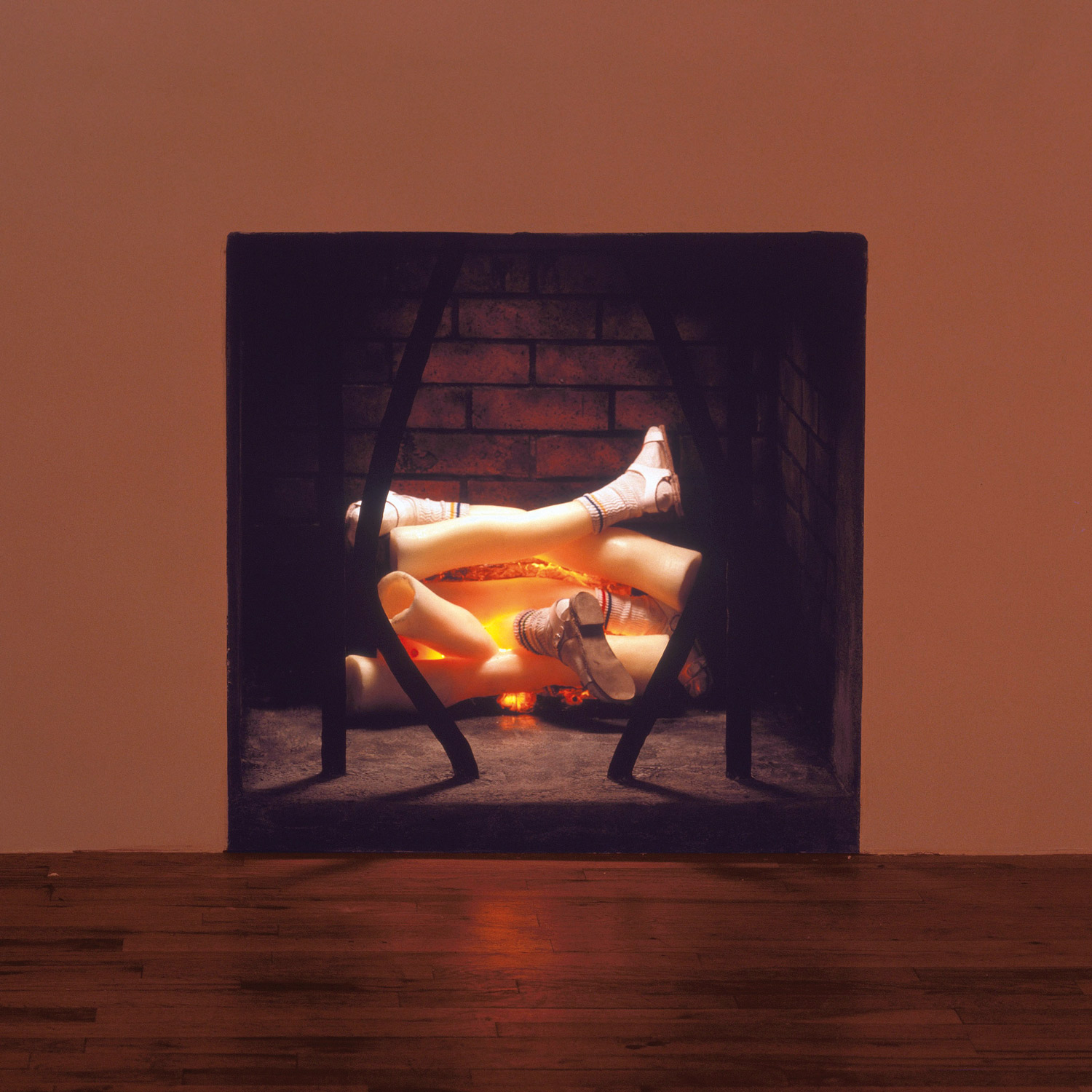 The following text originally appeared in Flash Art No. 177 Summer 1994 and was written by Henry Schwartz, a psychoanalyst…