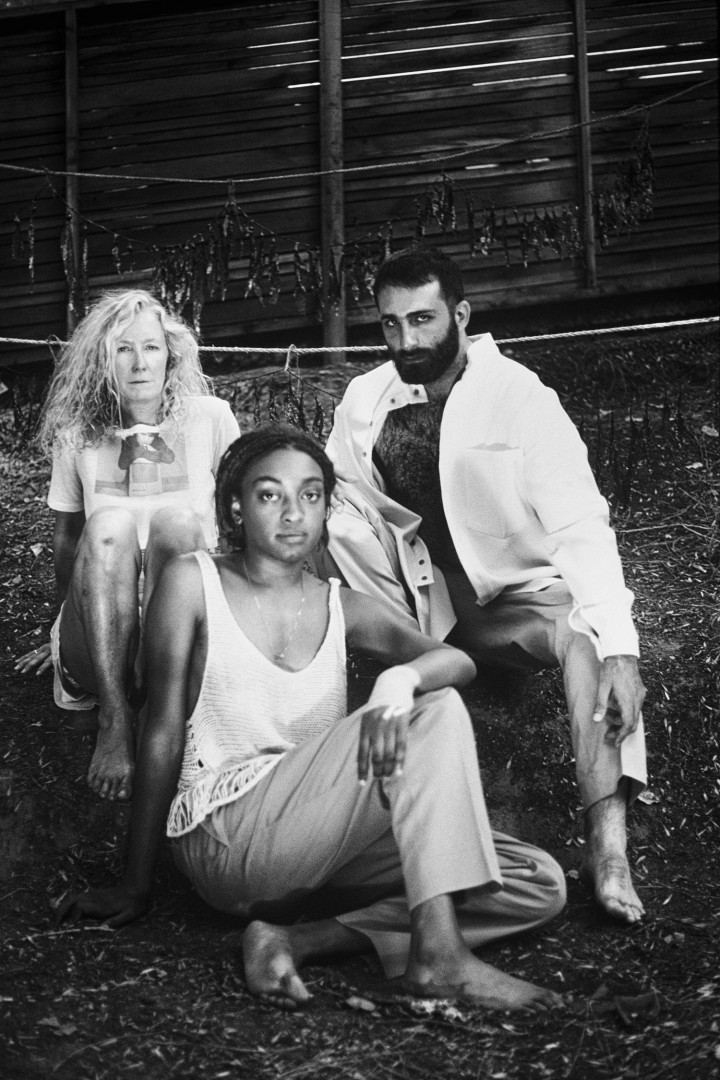 David Lieske: Zoe, you just moved to California, while Mike, you remain based in New York. How does this bicoastal living situation impact your production?

Mike Eckhaus: Going bicoastal has been a very interesting transition for us. I think anytime a large structural change happens in a working situation or system, there is time to grow into it. We’re very much growing into it right now as it’s only been a short period of time since we have been on separate coasts. Things are going really nicely so far. Even though in the end everything is a whole, we naturally manage different components of Eckhaus Latta, so what usually goes on in the studio hasn’t been hindered by Zoe’s move at all. It actually allows us to be better with our time and more focused in the conversations we have with each other.

Zoe Latta: We have to be really deliberate about what we need to talk about. Otherwise we’d be on the phone all day. Now the things that actually do require to be told to each other become very apparent.

ME: Technology also allows for us not to be together. We can have an interview or conversations where one of us might be on a computer screen. It’s really not that hard at all.

DL: Which parts of your work happen in New York and which in Los Angeles? What is each city good for regarding your production and working process?

ZL: We do knits primarily in Los Angeles. Our relationships here is very fresh, only about six months old, but I feel like there is a production facility on every block I walk down here. I don’t have this feeling in the garment district of New York. There is a lot more production of fabric here, too. We just started using closeout fabric that we get directly from the mill rather than things that have already been passed around. New York is still the center for fashion in terms of magazines, stylists and shoots.

ME: The whole cultural industry is here. New York is its nucleus, at least in this country.

DL: In terms of its representation: is Eckhaus Latta still a New York label?

ZL: I don’t think we ever wanted to define ourselves as a New York brand.

ME: But we’re inevitably defined in that sense because we show during New York fashion week. This might be different in Europe: nobody thinks of Comme des Garçons as a Parisian brand even though they show during Paris fashion week.

DL: Speaking of fashion week: how much is the classic system of shows, showrooms and buyers still intact? Is it still really important to do shows with places like Opening Ceremony partly taking over the distribution of young designers?

ZL: We do fashion shows because we love them. I don’t think it’s necessary to have a big show with hundreds of guests or to pay a showroom a certain percentage. We do it because firstly, we’re learning how this traditional system functions and the only way we can do this is by understanding its foundation. Working in tradition doesn’t feel confining to us. The distribution of, for example, Opening Ceremony to me isn’t a new idea as much as it’s inserting trickier, riskier people into the same system.

ME: The shows are creatively really important to us and the foundation of our brand. But at the end of the day seasonal shows essentially exist because of buying seasons. On a basic commercial level, you have to participate in this industry during a certain period of time when stores buy collections. I do think that this is changing with the Internet enabling people to control the distribution of their own product. The system is very fast, but the shows are something we both really love and an interesting challenge to be part of. I love fashion week.

DL: You often integrate people from your community who are not professional models, but also cultural producers, like Juliana Huxtable or Stewart Uoo. Is this a way to also present your label as a social practice and to bring out your peers?

ZL: Because of the way we work we never get to see our collections really before the show happens, when everybody else does, too. In this way it’s a nice feeling to see people we love in the clothes in that moment. The community around us is part of what it takes for us to make these clothes.

ME: Both of us are very social people. We are attracted to the people in our community and find it important to cast and highlight people who are doing interesting work and are part of this cultural system that might be happening in New York or L.A., Berlin or whatnot. We like to have strong, powerful personalities modeling our clothes, who have a certain relatability of realness.

ZL: We are looking for a standardized energy. But it’s not so binary: we don’t usually cast based on someone’s attitude when they enter a casting room. Professional girls are the perfect size and walk, which is why we book them. The other ones we want to make sure are zany.

ME: Yes, the clothes always look amazing on a model’s body, but it’s also a question of how someone carries clothing, as well as themselves. Both ways of casting approach the same end goal: How do you make this strong? How do you feel good in what you’re wearing?

Shot at Evans 3721 LA; kelp-art by Stefan Tcherepnin and Tobias Madison; tiki hut by Cooper Jacoby and Skye Chamberlain. Thanks to Alex Freedman and Robbie Fitzpatrick.

David Lieske is an artist based in Berlin. He co-runs Mathew, an art gallery in Berlin.

Eckhaus Latta is a fashion label founded in 2011 by Zoe Latta and Mike Eckhaus.

Allan Sekula was long devoted to contemplating the open sea. Turbulent and wild, water can buoy a new global political…

I learned of the Lebanese band Mashrou’ Leila during the very first evening of my first visit to Beirut. Caught…