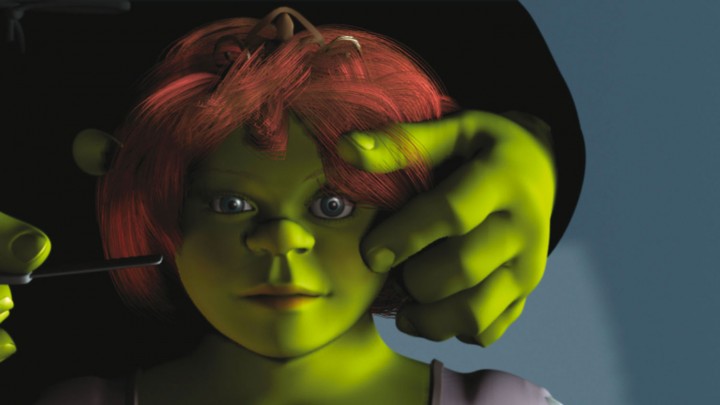 Florence Derieux: I keep a vivid memory of the first work of yours that I ever saw. Un chien andalou (2004) is a short 3-D animation, both very simple and extremely powerful, which combined references to the popular American computer-animated film Shrek (2001) and the 1929 Surrealist film of the same name by Luis Buñuel and Salvador Dalí. More precisely, Shrek’s two main characters replace the avant-garde actors and reenact the famous close-up of a woman’s eye being slashed open with a razor. It was for me the first moment when I immediately related to an artwork outside of any consideration about the traditional dichotomy between East and West. We obviously shared the same history, even if from different sides of the wall, and one could no longer approach this form of appropriation of Western images as a mimicry of modern tropes but rather as a free manipulation of a common vocabulary.

Ciprian Mureşan: I discovered Un chien andalou after 1989 and I saw Shrek when it came out, in 2001. The idea came to me when I saw a detail of Shrek’s eye on a cereal box and for a fraction of a second I replayed in my mind the scene from Un chien andalou. Shrek as a character is an antihero, and the story of the original film is somehow about turning a classical story upside down. My video is pretty much based on the same premise.

FD: It is easy to understand why cinema is such an important source of inspiration for you. In 3D Rubliov (2004) you refer to several episodes of Andrei Tarkovsky’s Andrei Rublev (1966), a visually stunning film celebrated both in the East and in the West, which depicts the life story of a famous icon painter in 14th- and 15th-century Russia. While it mirrors the film’s religious, social and political themes and reflections on faith, art and freedom, your animation breaks with all the film’s conventions and becomes an extremely specific object. Can you explain your choice?

CM: The idea was to simply copy a scene of a classical movie and to put it through the filter I chose, i.e., the lens of 3-D animation. When thinking about how the 3-D perspective exaggerates depth, I made the connection with the technique used in Byzantine icon painting, which by contrast excludes depth and perspective, giving value instead to the spirituality of the life after death, on a Christian note. On the other hand, my version is built artificially, digitally, using a computer, without the help of the analogue recording. It enjoys another kind of spirituality, a secular one this time: it is “the ghost” of a cultural product, i.e. Tarkovsky’s film.

FD: Besides manipulating cinematographic references you also use artistic and literary sources. Iconic works from the history of modernity are systematically demystified and used as powerful critical tools. Leap into the Void, After 3 Seconds (2004), for instance, offers a fatal conclusion to Yves Klein’s proposal, whereas The End of the Five-Year Plan (2004) is an interpretation of Maurizio Cattelan’s La Nona Ora (1999) in which John Paul II, crushed to death by a meteorite, is replaced by the Patriarch of the Romanian-Orthodox Church. Many of your works are inspired by writers, such as Eugène Ionesco (Rhinocéros, 2006) or Franz Kafka (Incorrigible Believers, 2009). Can you tell me about The Second Invasion from Mars (2010), an important installation of books mixing the worlds of literature and cinema?

CM: I chose The Second Invasion from Mars, a book written in 1968 by the Strugatsky brothers, because it is a sequel, a clever continuation of H.G. Wells’s science fiction novel The War of the Worlds (1898). The difference is in the manner the Martians intend to conquer the Earth. Instead of using violence they use economic means, acting as a metaphor for the capitalist way of thinking. I made drawings following this story, divided into 21 scenes, which I inserted in 21 different novels. I tried to put together a narrative in diagonal, ciphered through illustrations. You open the books and by accident you find a drawing with no connection to the novel in which it has been inserted. However, when all the drawings are gathered together you get another story. In a sense, it is the same method that I used in Auto-da-fe (2008), where I divided a fragment of Elias Canetti’s 1935 book Die Blendung (translated as Auto-da-Fé) into individual phrases that I then used as graffiti that I drew on the walls of various cities in Romania. Like the graffiti from Auto-da-fe, the drawings inserted in the books have a double existence: an individual one and, if put together in a certain order, one that assembles the original “text.”

FD: You also often use theater plays as a starting point in your work, and you have collaborated several time with playwrights. Dog Luv (2009), a filmed puppet show about mankind’s history of torture and execution, was written by Romanian dramatist Saviana Stănescu, and the text of the video I’m Protesting Against Myself (2011) was co-authored with Gianina Cărbunariu.

CM: In Dog Luv, I used the play written by Saviana as a pretext to place the puppeteers and the puppets within the same scene. I tried to redistribute equally the importance of the puppet theater’s elements. It is an attempt — and so far I cannot say whether I succeeded or not — to dress the puppets in black, a method used by the puppeteers to hide in front of the audience. In I’m Protesting Against Myself (2011) I suggested the transformation of a garbage can into a stage for a puppet theater, a kind of a mobile theater that goes through the city and mixes in with the urban landscape. The little scenes played on this stage by the puppeteer actor Pilo Adrian Ilea touch on the condition of the individual who wants to protest after the power of the masses as a political subject has been compromised, as in Romania and beyond.

FD: Through simple gestures and methods drawn from popular culture you analyze the mechanisms of cultural distribution. You also analyze the ambivalent, if not contrary, relationship between memories from recent history and everyday experience, along with the relationship of civil society to different forms of power. What seems remarkable is not only the plurality of the influences you consider, but also the diversity of media you use, such as film, video, photography, works on paper, sculpture and installation. Sometimes, like in Communism Never Happened (2006) — a work in which you cut those words out of vintage vinyl records — everything seems to converge…

CM: For Communism Never Happened, it felt right to cut out the letters from the material itself, which proves the logic of this proposal. The pre-1989 vinyl disks contain recordings of urban and folk music that were popular because of their contribution to the mass culture officially promoted by the former regime. Actually, through these cultural forms, the expression was very clear, or at least less ambiguous than the roughly political discourses — the nationalist drift of the Ceauşescu regime. In a way the work vibrates as a ruin after an atomic disaster. The material of the container that passes the message is just as important.

FD: Can you talk about your monumental installation entitled Recycled Playground (2011)?

CM: Recycled Playground is an attempt to create a toy, but on a bigger scale. I decided to use recycled objects like the garbage cans that you find everywhere on the street. The idea was inspired by an amusement park in the suburbs that had been left decaying for years. In the park there was a little train where now all you can see is rails. I am not sure whether the park went bankrupt before or after 1989, but after the Revolution the situation got worse and the landscape started to resemble a cyberpunk movie like Mad Max (1979) or Blade Runner (1982)

FD: Childhood is a recurring theme, and with it the notions of playfulness and innocence as well as violence. Would you say that your work has become darker? And can we perhaps make a parallel with the development of your drawing practice?

CM: Childhood is addressed in my works on two levels: on the one hand it is about my memories, my own childhood, and more precisely a childhood under a dictatorship; and on the other hand there is my son and the “problems” around him. Regarding the darker tendency, I only hope that I’m not losing my sense of humor. I don’t use a general aesthetics for my work — it comes from the stories, and maybe lately the stories have needed a dark form. My interest in drawing came about when I realized that at school — where I practiced drawing for years — we were taught a very simplistic way of thinking, a formalist one. There was no other meaning than the historical approach, the issue of imitation, “realism.” I needed to give another direction to my drawing practice, and sometimes I find it in the illustrations I make for children books.

Ciprian Mureşan was born in 1977 in Dej, Romania. He lives and works is in Cluj-Napoca, Romania.