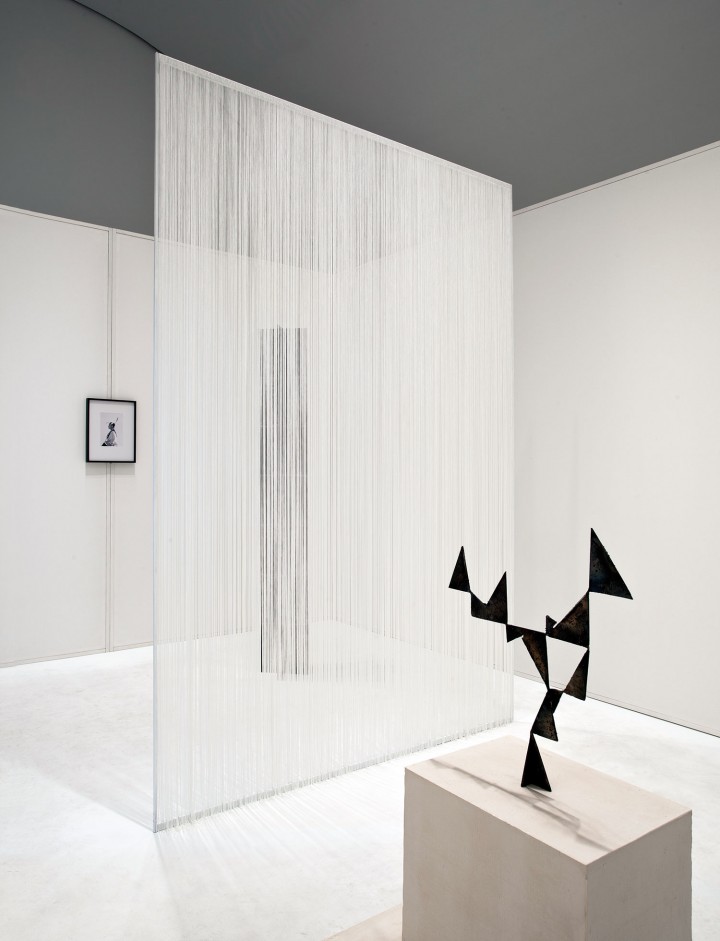 Sara VanDerBeek: I came here excited having recently seen your exhibition “Available Light” (2012). It was so simple and luminous, and yet a very challenging show. At first, I moved quickly through it. Then I realized I needed to slow down. As I did, much more was revealed to me and my experience was incredibly layered. What was engaging was that within this immersive, image-saturated environment in which we live, you created an exhibition that required a level of observation that is uncommon today.

Sarah Charlesworth: I am always trying to pare things down. There is an apparent simplicity to each image, and to the show as a whole, and yet there are many different things going on. Because I was touching on a range of different considerations and even different formal approaches, I tried to find a way to give the work some visual coherence. I combined photos of physical objects, like a crystal ball or various prisms, with images of the studio itself in the process of making the works. In the piece Regarding Venus (2011) I’ve incorporated an appropriated image of the planet Venus with a real photograph shot against the picture window in my studio. That image includes a cut out fragment from a Picabia painting. So the sources and subjects are different. I was juggling rather complex elements so I used a limited palette and repeated forms to establish some visual integration.

SC: Yes. There are circles running through almost every work: the circle in Crystal Ball (2011), the circle of the planet Venus in Regarding Venus or the circle of spectral light of the holographic prism in Prism (2011). A lot of the pieces have very strong vertical lines bisecting the image. In Half Bowl (2011) I covered half the window with white paper and half with blue paper, and the image itself is split by the color of the light. That was installed right next to a piece that shows the studio wall with stacked cardboard bifurcating the image vertically and horizontally. And of course images push-pinned to the wall in one work appear in another as finished pieces. The show as a whole reveals the process of it’s making.

SV: I was wondering about those images of the studio. At first I questioned their inclusion but then I realized they were important as a key.

SC: That’s precisely how I was conceiving of them. In the last two bodies of work I’ve used the studio and the process of working as integral to the idea of the series as a whole. In this case, I was trying to confound the difference between a photograph as something that is set up, built, posed, a “constructed image” that has closure, and a photograph that is just observed, something that the camera frames, that happens to be there in an incidental way. I was interested in confusing those two approaches to photography, in juxtaposing them against each other because I think it is a false distinction.

SV: I think that the terminology that is used around photography is something I am continually trying to figure out — what vocabulary I feel comfortable using. I enjoy that photography is very elastic and expansive. Movement between different ways of capture is a significant aspect of my practice and often leads to new directions in the work.

SC: In your installation at the Whitney Museum last year, which was based on Leaves of Grass by Walt Whitman, you combine photographs that you took at sites in New Orleans and Baltimore, that are more like straight photographs, with photographs that are highly constructed using forms that you built. These two types of images were then combined together in the installation.

SV: That exhibition was a real turning point. Often when building the objects or the sculptural arrangements that I photographed, I think it is important to reveal through various degrees of transparency the process of their construction. I like allowing the experimentation of the studio to be evident within a final work.

SC: I agree. I am interested in that more and more. In my last series, “Work in Progress,” the images incorporated various tools and art supplies. There were some photographs of my camera in front of the picture window in my studio, and I had put paper on the window with tape and I literally left the tape in the final image behind the camera. There is something interesting about letting the process of photography itself hang out so the images aren’t perfect, as in classic advertising where the photographers and the process are supposed to just disappear. It’s really outing the process.

SV: I think it is very easy these days to create a perfect image. Enabled by technology you can create something that is seamless, but I often find that is not an easy image to enter. I appreciate process. Photography can be a very self-reflexive medium. If I am constructing an image or a sculpture, I like referring to the fact that, in its capture or its installation, it is a conflation of two and three dimensions.

SC: One of the things that I find really wonderful about your work is that instability: “What is it? How do we relate to it?” For instance, the image Baltimore Window (2010) from the Whitney show… It’s a picture of a latticework window stuck in plaster, which you had built and then photographed. The image exists as a print, which in turn is part of a suite of photographs. Our perception of it goes back and forth between seeing it as a window, a sculpture, a photograph and an element within a group of photographs. Your work resides in all those places at once and challenges the viewer’s ordinary way of categorizing those different forms and positions that an artwork can occupy. I found that to be beautifully realized in your work at the Hammer Museum, where you not only combined three-dimensional works with photographs, but you also created an environment in which you displayed them that was part room, part sculptural form, part stage. So there is nothing exactly fixed.

SV: My hope was to create a space that was in between. As you moved through it, things were shifting and changing. The perspective could collapse. It was a real space but also somewhat ephemeral.

I worked with Sonya Flores, a Native American dancer, as both an inspiration for the show and a subject. The simultaneous abstraction and figuration that occurred when she danced was a starting point for some of the objects. With her portrait, I was looking at historical imagery but also thinking about her practice. As a performer she was calling upon earlier, even ancient, performance and dance, but her style was also very contemporary.

SC: It sounds to me that what you are speaking of is what inspired the work, but the work itself is so minimal and poetic.

SV: The composition, scale and style of the print were meant to be reflective of this meeting of times within the image. Many of my earlier images were dense and layered. More and more I am focusing on essential forms and gestures. Editing has become increasingly significant within all aspects of my work — the sculptural forms, the images, and the overall installation. How does editing come into play for you?

SC: I feel like editing is an essential part of the work process for me. I usually shoot in 4×5, and I work on a large light table so that as I am processing chromes and reviewing the chromes that I have shot, the next images that I am beginning to work on are often direct responses to things that I have just seen. So I am continually responding to my own work.

SV: When it comes to the formal qualities of any work, I very much believe that the craft of an artwork contributes to its reading. We both still shoot conventionally using film and spend a great deal of time developing our prints. I find your prints are always very well resolved. The color, light and nuance of the details contribute to the strength of the images. Do you edit during the printing process?

SC: No, usually I have pretty much done a final edit before I start printing. But I can shoot many, many times more images before I come up with my final coherent selection for any given series. I am constantly adding and subtracting as I work. What are you working on now?

SV: My new body of work is exploring performance again. I feel, more than previous works, this process is one of action and response, and addresses the confluences and contrasts between the images and the objects that I make. I’ve taken photographs of modern dancers, and the forms I am building are made up of geometric modular units inspired by the lines and shapes of the dancers’ bodies within the photographs. The images and the objects continually inform each other. Something I find very important about your work is how your photographs are incredible objects too. They are sculptural, but I am not sure if you have ever considered them in that way.

SC: I don’t think of them that way, but their physicality is important. As a photo-based artist, I have always intentionally made objects. It is very important to take note of the difference between what an image is and what an object is. In all my artworks the frame is an important part of the piece, in the same way that the field of the image, the negative space, is as important as that part which is called “image.” I consider the size and the finish of the piece to be important. These choices address a different discourse than they would if they were just images.

SV: And this is where the terminology seems inadequate.

SC: I find it interesting nowadays, when people are speaking about photographs, that actual things, with a size and a scale and a finish, can easily be confused with something that is a picture circulating on the Internet. As a culture, our thought processes have become so limited by our vocabulary, by these words like “photographs” that can refer to something as diverse as an image taken with a phone and circulated on the Internet, an Ansel Adams image downloaded as data from Corbis Pictures, and an actual vintage print with specific physical properties. The vocabulary we still employ to speak of these dimensions of visual culture is anachronistic and can barely approach the richness and diversity of contemporary practice.

Sarah Charlesworth was born in 1947 in East Orange, New Jersey (US).

Sara VanDerBeek was born in 1976 in Baltimore, Maryland (US).

They both live in New York.