As Feral File celebrates the cross-fertilisation of artists and technologists, Alex Estorick speaks to Sarah Friend and Gene Kogan about the age of hybrid creativity. 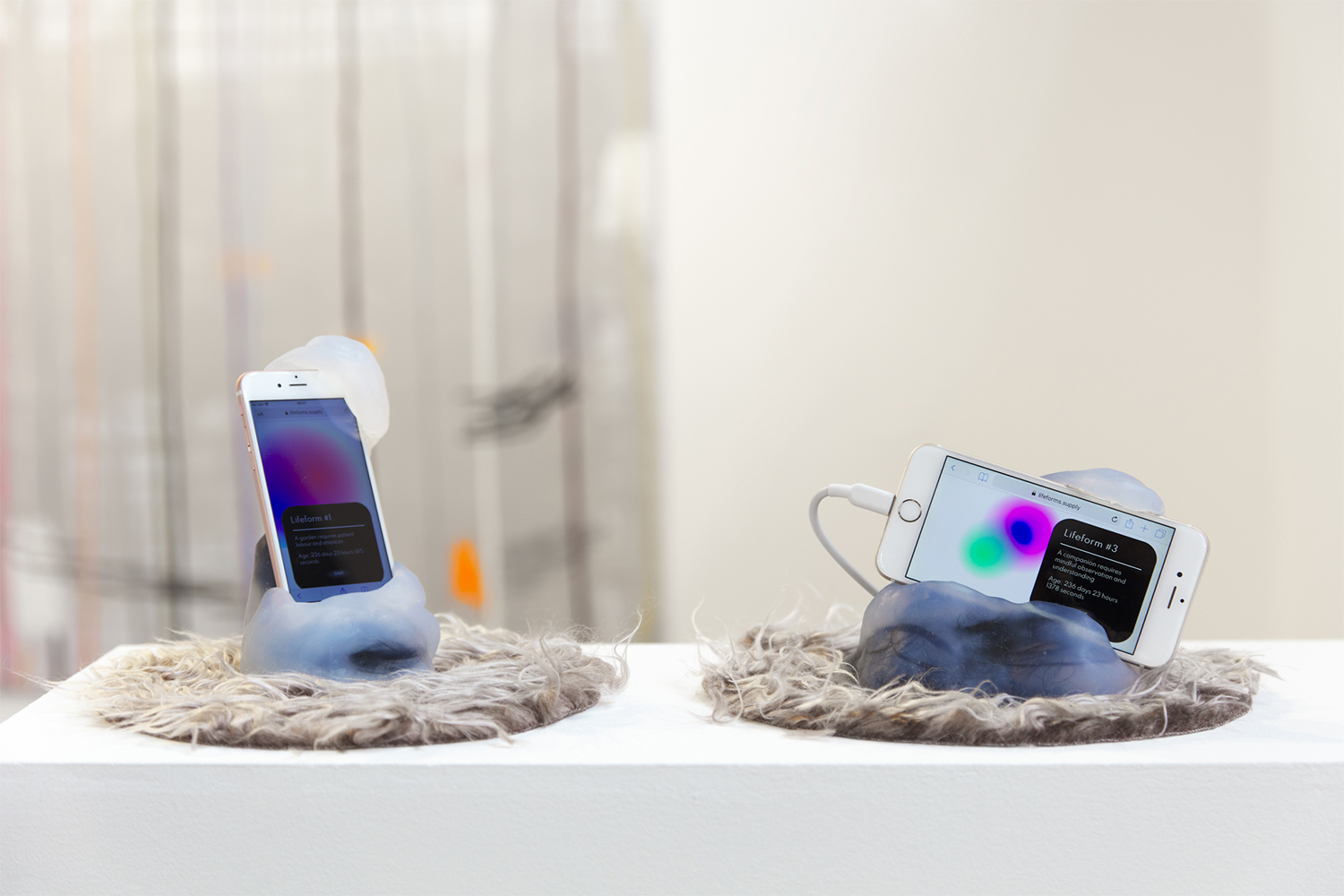 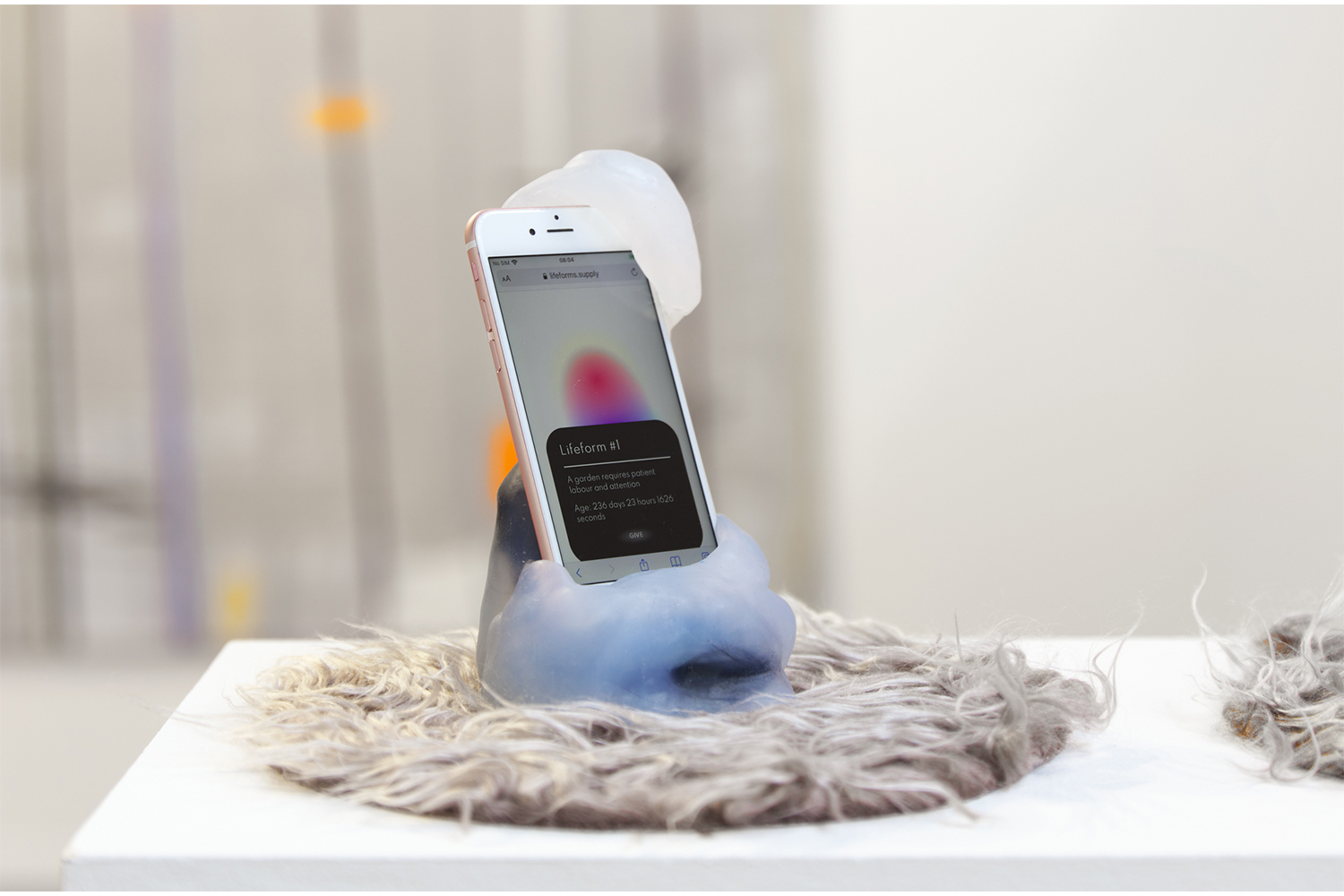 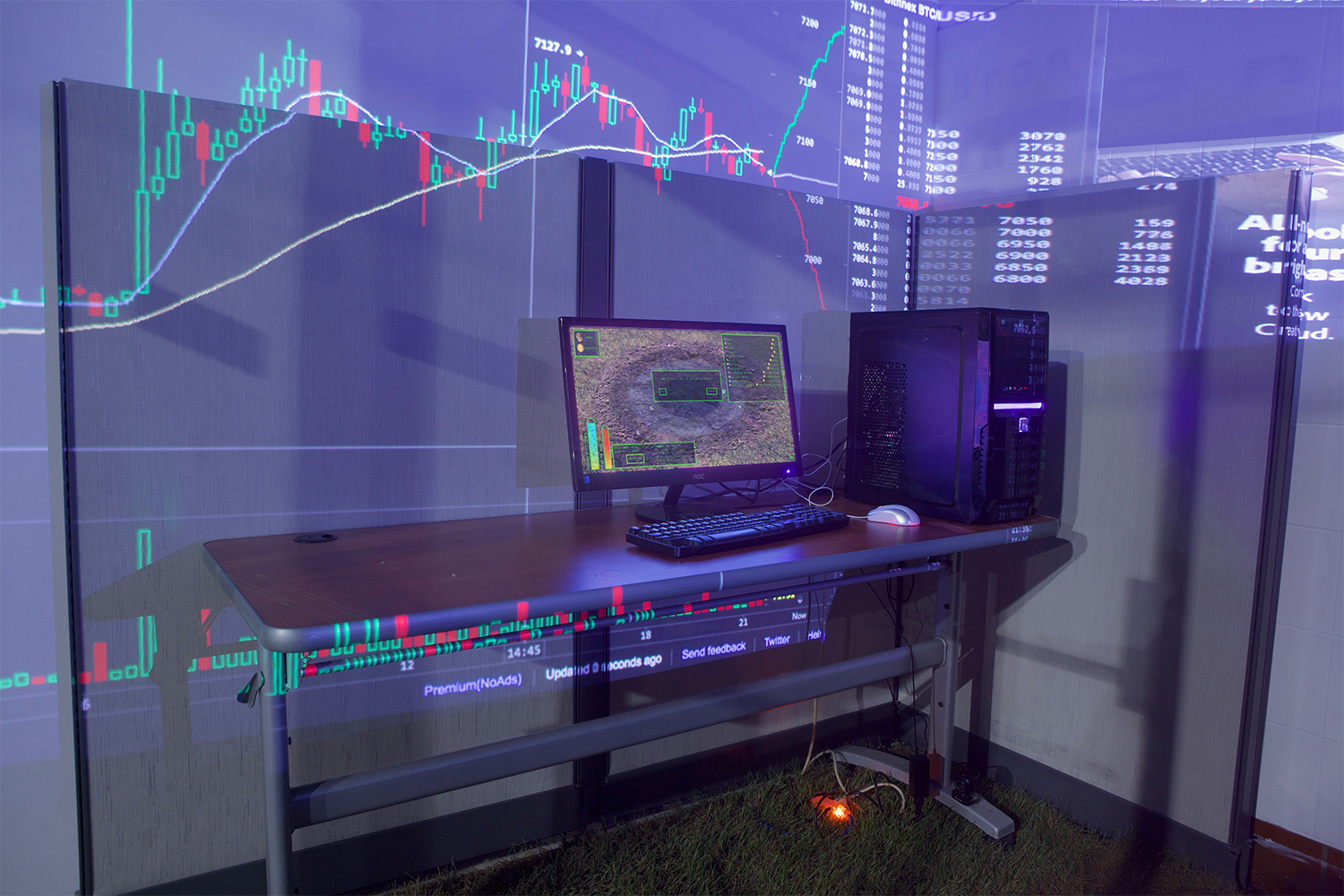 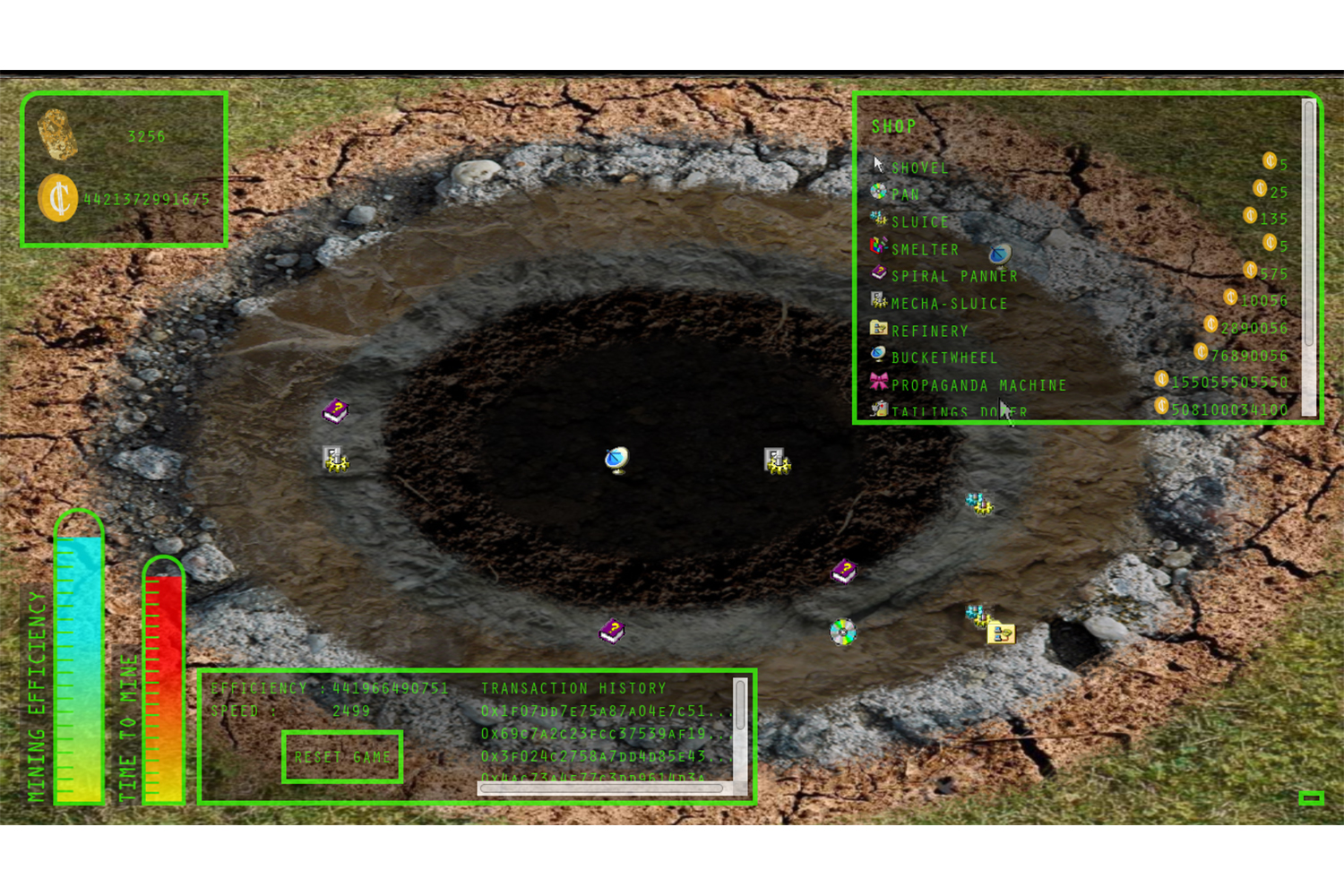 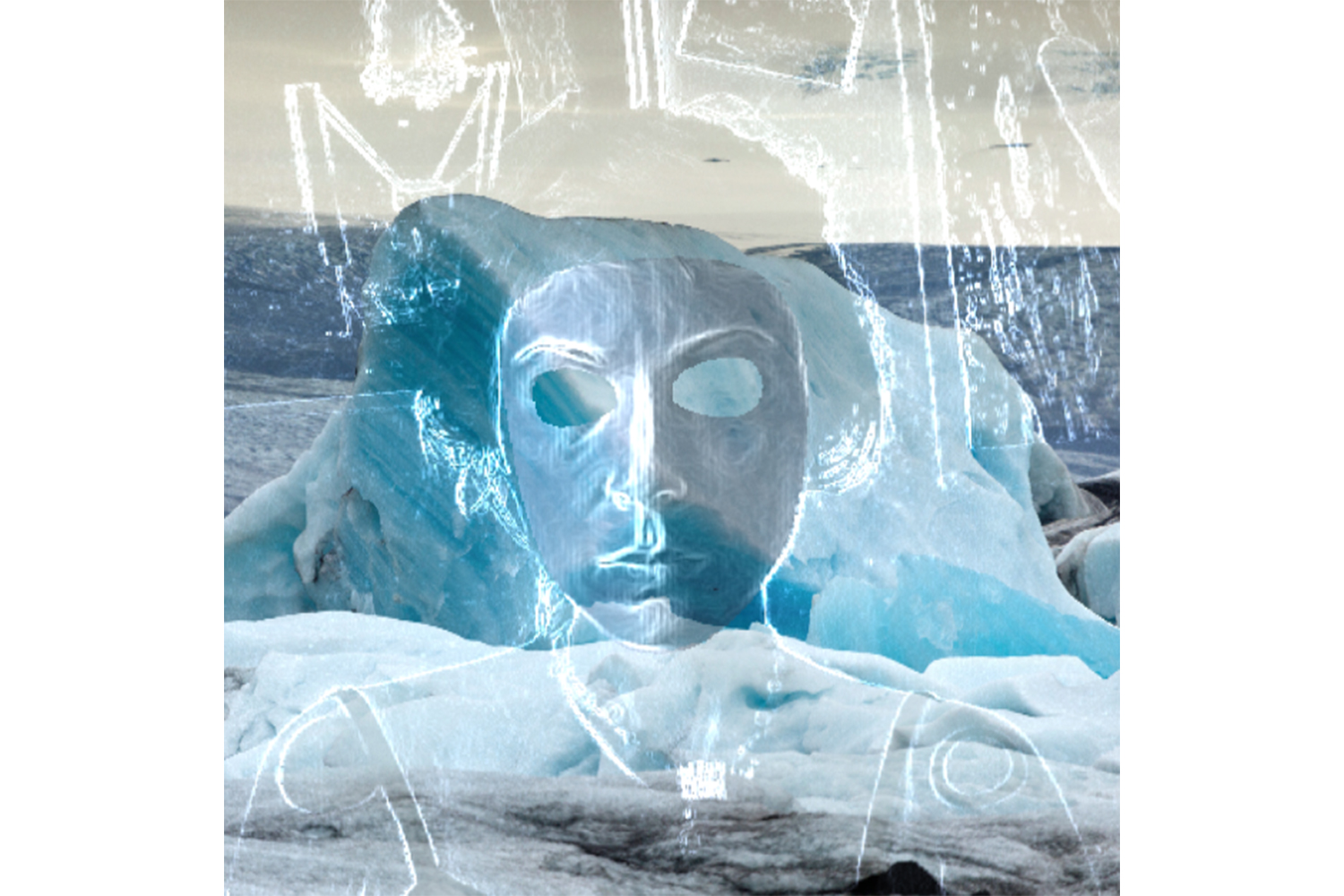 Alex Estorick: Collaboration between artists and engineers is central to the exhibition, “Ecotone,” launched recently on Feral File. Is it possible to separate these groups any more or are we living in an age of hybrids?
Sarah Friend: Well, I didn’t study engineering — though I have worked as a software engineer — nor will I defend my qualifications as an artist. However, many years of code-switching between these worlds has shown me their surprising unity. Both artists and engineers are concerned primarily with “making things.” The approach and motivations for the work can be different, but I prefer to see engineering as creative and art-making as technical. I think that more can grow from the perception of unity than separation.
Gene Kogan: There is both increasing specialization and hybridity emerging as established fields saturate and spill over. Every field runs so deep now that progress churns on a day-to-day basis through the work of specialists. But hybrids at the outskirts also push established fields out of local optima, helping to cement new fields, while specialists perfect them. This prompts new discoveries and breakthroughs.

AE: Tell us about your contribution to “Ecotone” and how the work reflects your experience working among the Glitch community?
GK: I made a video piece called Interplanetary (2022), based on a CLIP-guided text-to-image pipeline similar to, but predating, DALL·E, Stable Diffusion, and the like. The piece is animated as a repeating perfect loop using a technique that I’ve been applying to AI-generated video since the days of DeepDream. The video depicts some strange aliens in their natural ecology, or at least what the text-to-image model thinks they might look like. The Glitch community felt like a bunch of aliens to me, but put together in a room, we all gelled and made our environment feel lush and fertile, and the video is meant to evoke that spirit.
SF: My work, Becoming Illegible (Mirror Studies #1) (2022), contrasts human faces and technologies of facial recognition and filtration with idealized landscape imagery. When I started the project back in 2021, I was thinking about human projections onto distant ecosystems, which inevitably reflect us more than them. I was also considering the processes of surveilling and making landscapes legible at a time when the climate crisis is altering them irreversibly.
I chose this piece for “Ecotone” because I think it speaks both to Feral File’s focus on software art and Glitch’s goal of creating an open space for artist experimentation. By extending the permeable zone between different kinds of creative practices (art and engineering) or different types of ecosystems (in an ecotone) this work looks at the murkier place where they might meet — the human and the landscape, and what literacies we might find needed or lacking there. 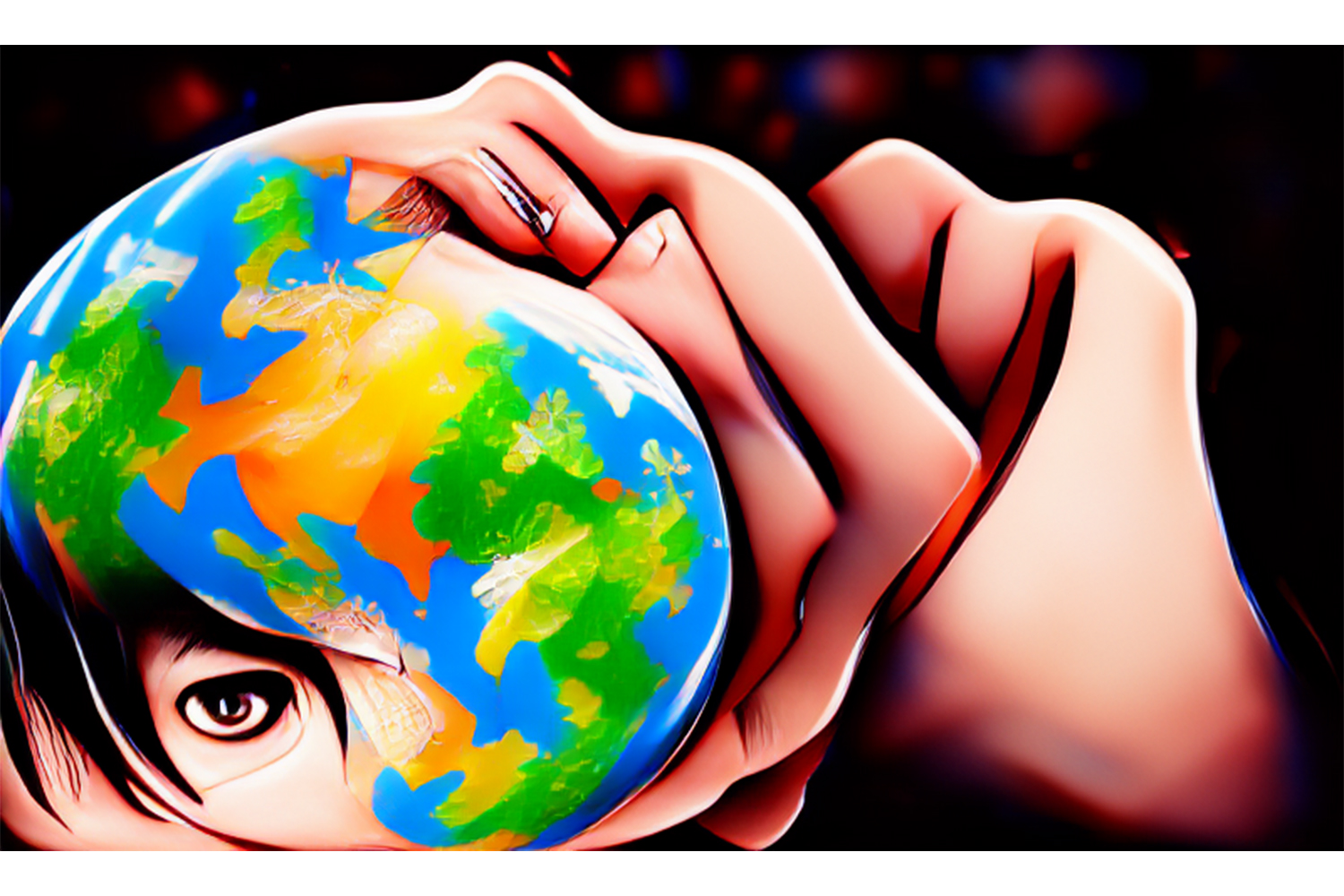 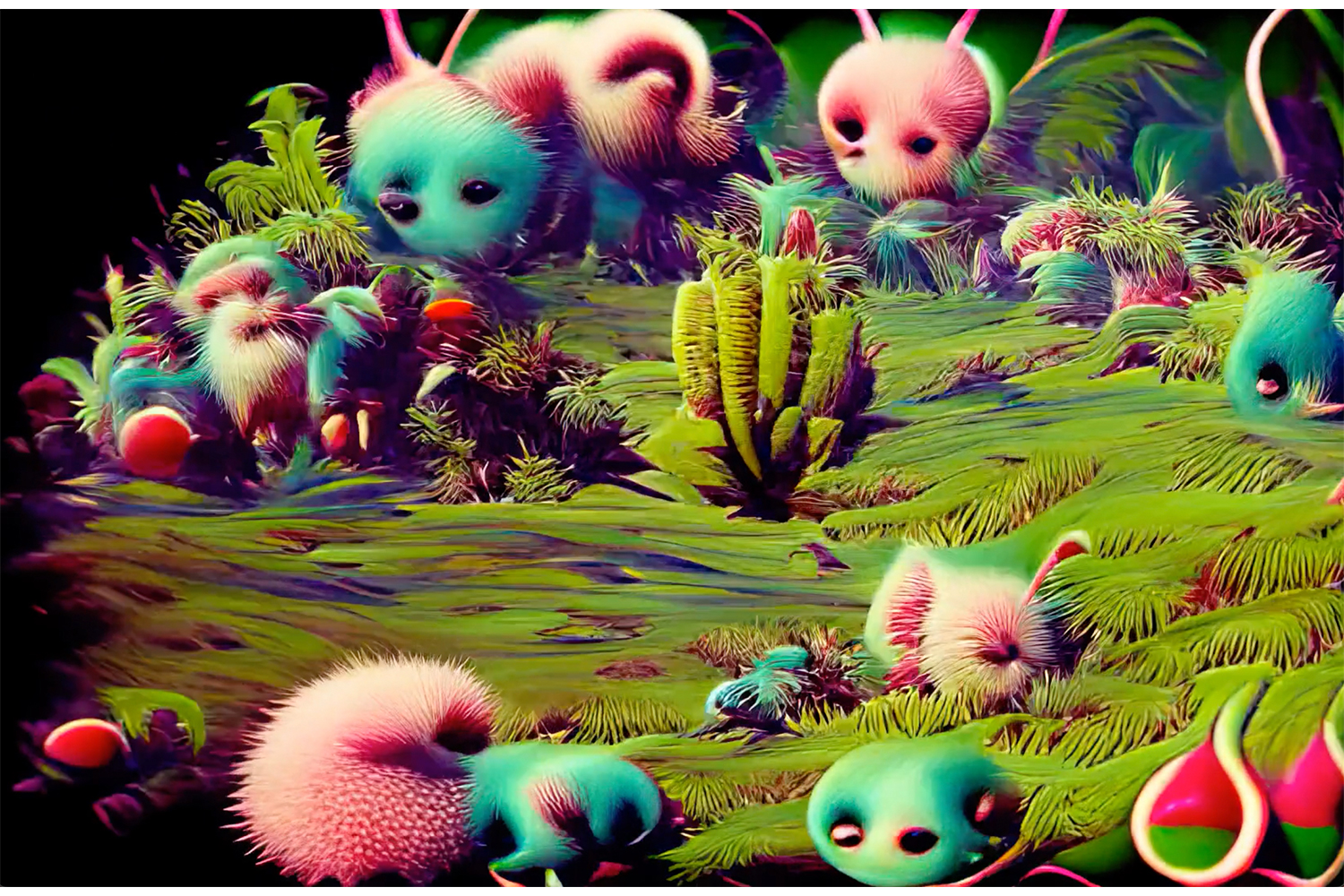 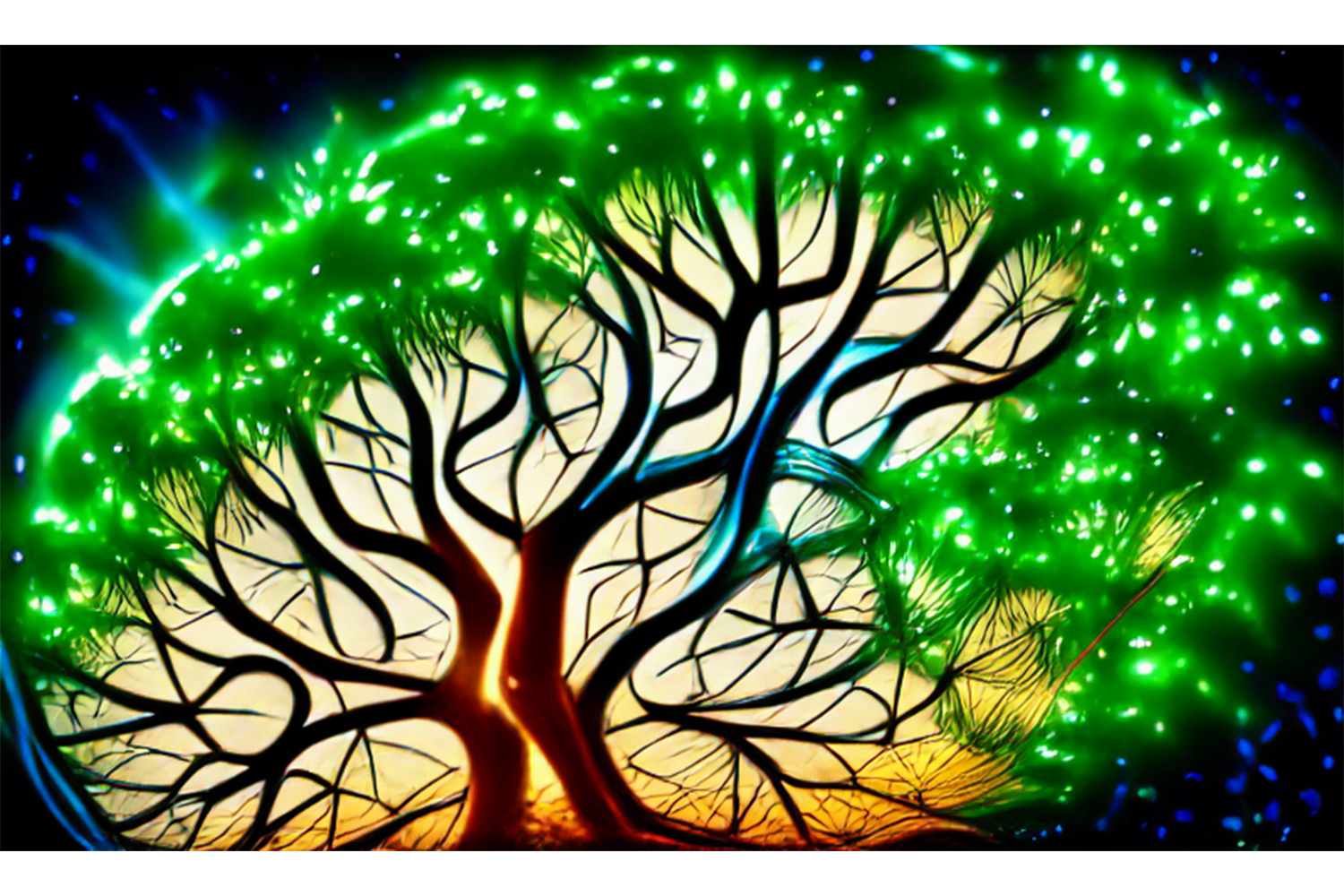 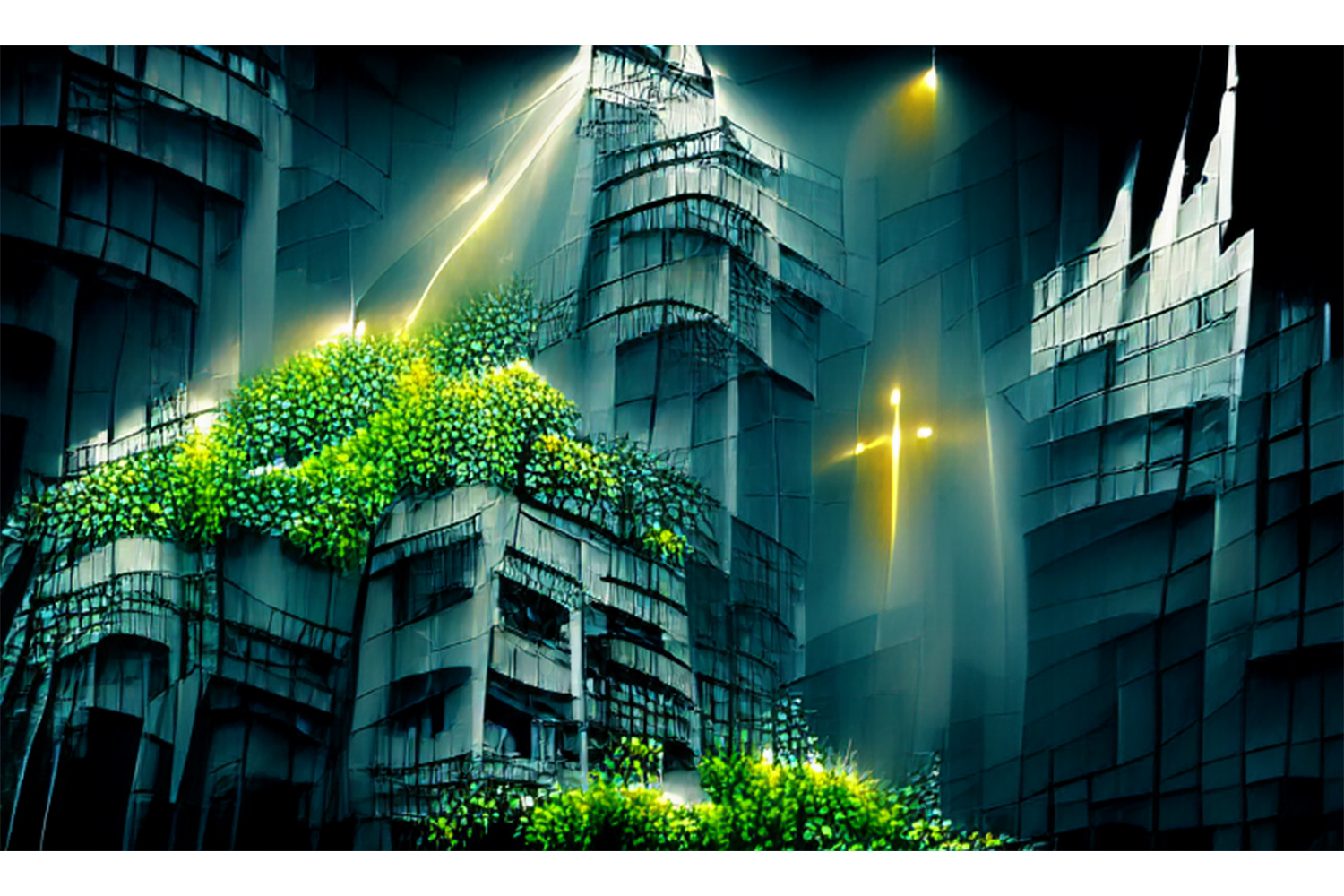 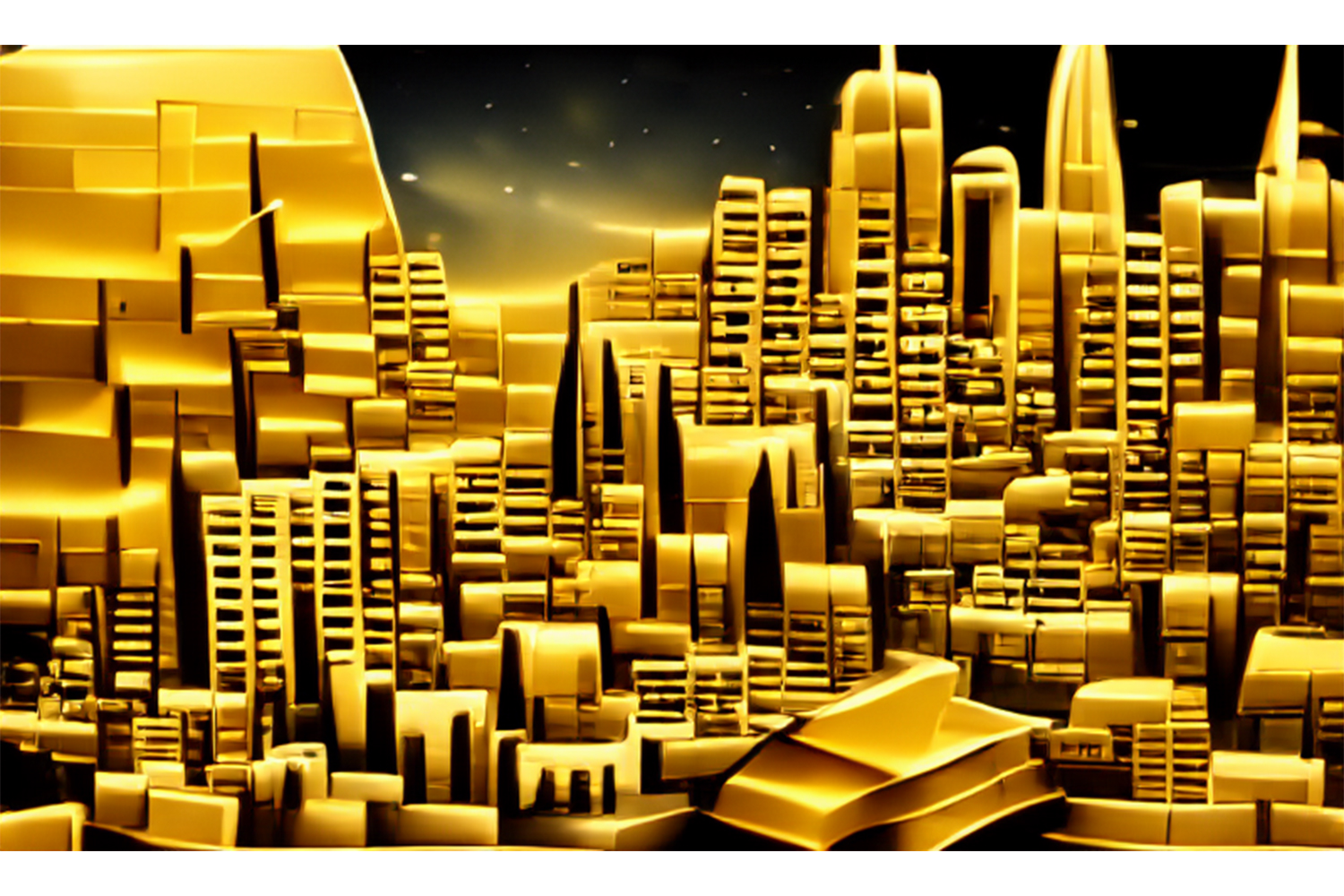 AE: The concept of code as an art form has grown in recent years. What is the relative importance of the visual and non-visual elements of your work?
SF: Usually, my work takes a systems approach and the specific visual elements follow from the idea, form, and context. The references and even mediums and materials can vary wildly. So while I feel like art is primarily an aesthetic experience, however loaded or difficult that may be to justify or explain, an aesthetic experience doesn’t need to be primarily visual or even visual at all.
At moments like this I like to quote Gerhard Richter who wrote in his Notes from 1964-65: “I like everything that has no style: dictionaries, photographs, nature, myself and my paintings (because style is violence and I am not violent).” But just yesterday I showed my grandma some photos of my most recent exhibition, and after looking at them she said, “I thought you were going to show me some photos of your art.”
GK: Most of my work is visual, although the aesthetics are less important to me than the process. My work in generative art came from an interest in algorithms and structured but unpredictable processes. Visualizing them is more a way to understand those processes than to produce something beautiful (although occasionally it might do that too). It was my initial interest in AI which led me to discover generative art, which, much like AI systems, yields a high degree of emergent complexity from simple rules. When I first started trying to produce images with machine learning, the process was my primary interest, as most of the images produced would be quite ugly compared to what human artists do with their hands. In that sense, the code has always been the art for me. These systems have grown up a lot in the last few years, and some visual artists who are much more aesthetically-driven than me are identifying these tools as relevant to their own practice. So that’s an interesting transition that’s playing out.

AE: Community itself is highly prized in Web3, with many artists collecting work by their peers. What are the long-term implications of the artist-as-collector, let alone the artist-engineer?
SF: Personally, I love to collect the work of friends and fellow artists. But in the Web3 world, there’s also some anxiety around flippers and speculation. I think artists are very idealistic collectors, and can help to assuage those concerns. Mutual support and solidarity is important. However, to offer a very Web3 perspective — a game theoretic one — when money circulates quickly around a system, it increases a metric economists call the velocity of money. Higher velocity of money impacts perceived wealth. However, even with a high velocity of art collection, if there’s not some influx of outside capital, then the only person who will ultimately win is the tax collector. The market is a zero-sum game.
GK: The more digital tools — especially those mediated by AI — entrench themselves in the normal workflow of an artist, the harder it is to separate the ingenuity of that individual from the collective knowledge captured and resynthesized by the tools they use. AI art systems are big cauldrons which mix together the creativity and intelligence of countless people, most of them through training data. Artists collecting each others’ work feels like a reflection of this interdependence and networkization of digital artists.

AE: Following this year’s crypto crash, a lot of the hype generated in 2021 has drained away. One of the consequences has been the emergence of new critical frameworks whereby art on the blockchain might be judged as more than a speculative vehicle. How would you like to see your work evaluated?
GK: My motivation is to open up other people’s creativity and build tools that bring people together over shared interests, much more than it is to express myself through my art. I look at NFTs and other crypto tools for artists as a way of supporting and funding these kinds of initiatives. I’d like to see my work evaluated according to how it upholds or advances those ideas.
SF: The art world has had a long debate about who is the arbiter of quality, a debate yet to be concluded. Ironically, the market, as a system for dynamically calculating value in the form of price, and the cultural economy, which seeks to achieve consensus around quality, have a similar underlying structure. Maybe I am traditional, or else naive, but I would prefer audiences to experience and evaluate a work based on direct experience, while regarding critical reception and market signals as secondary inputs. 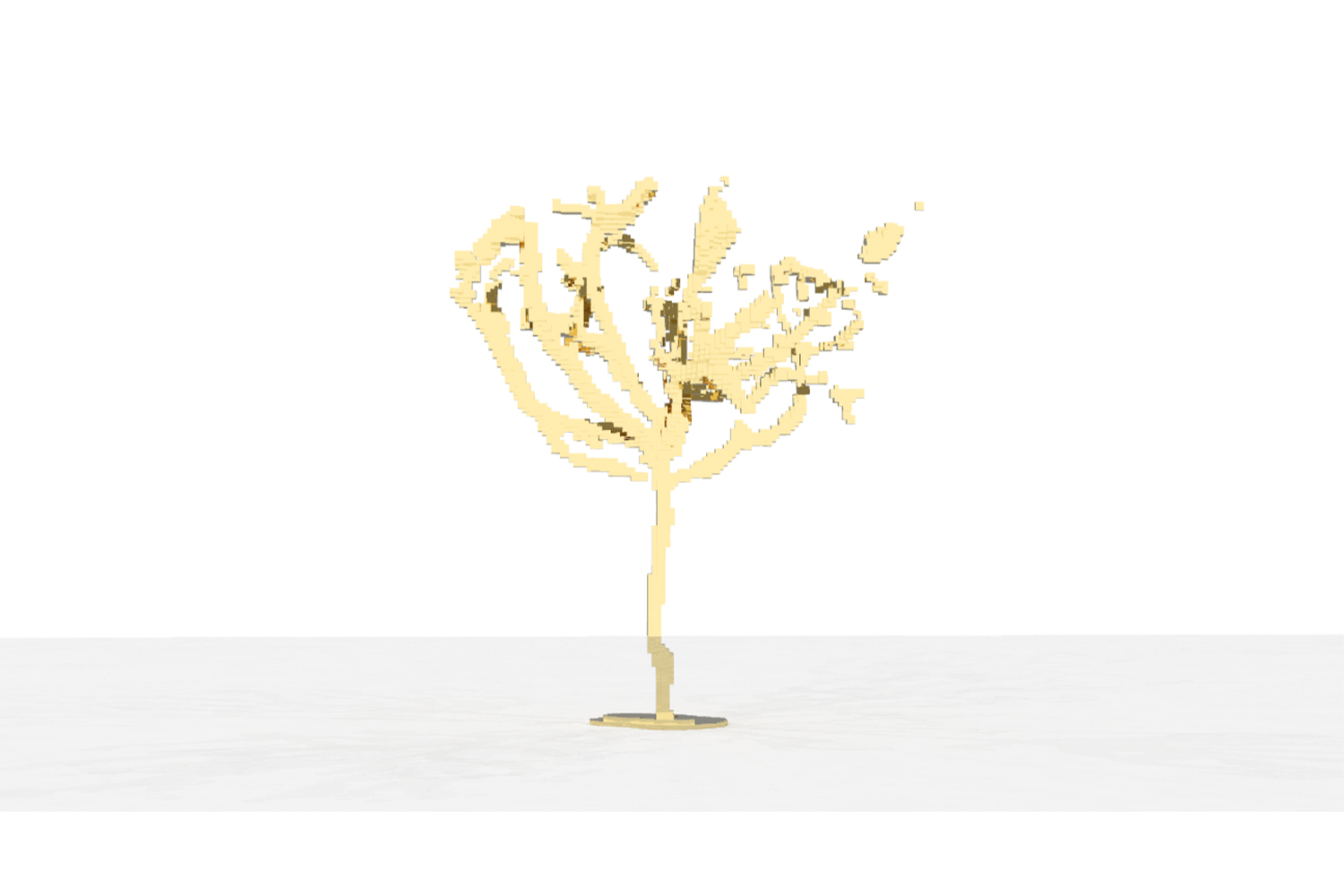 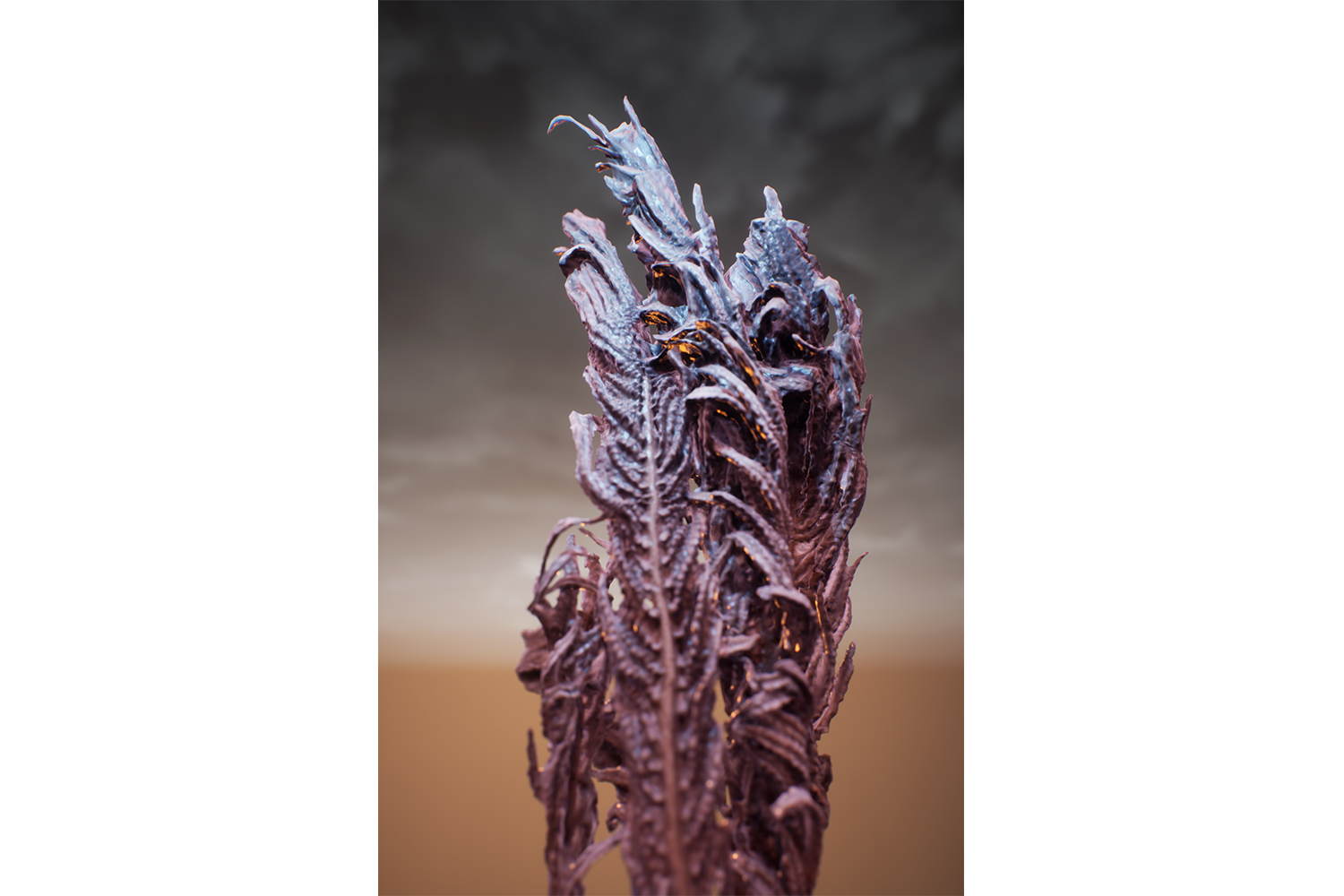 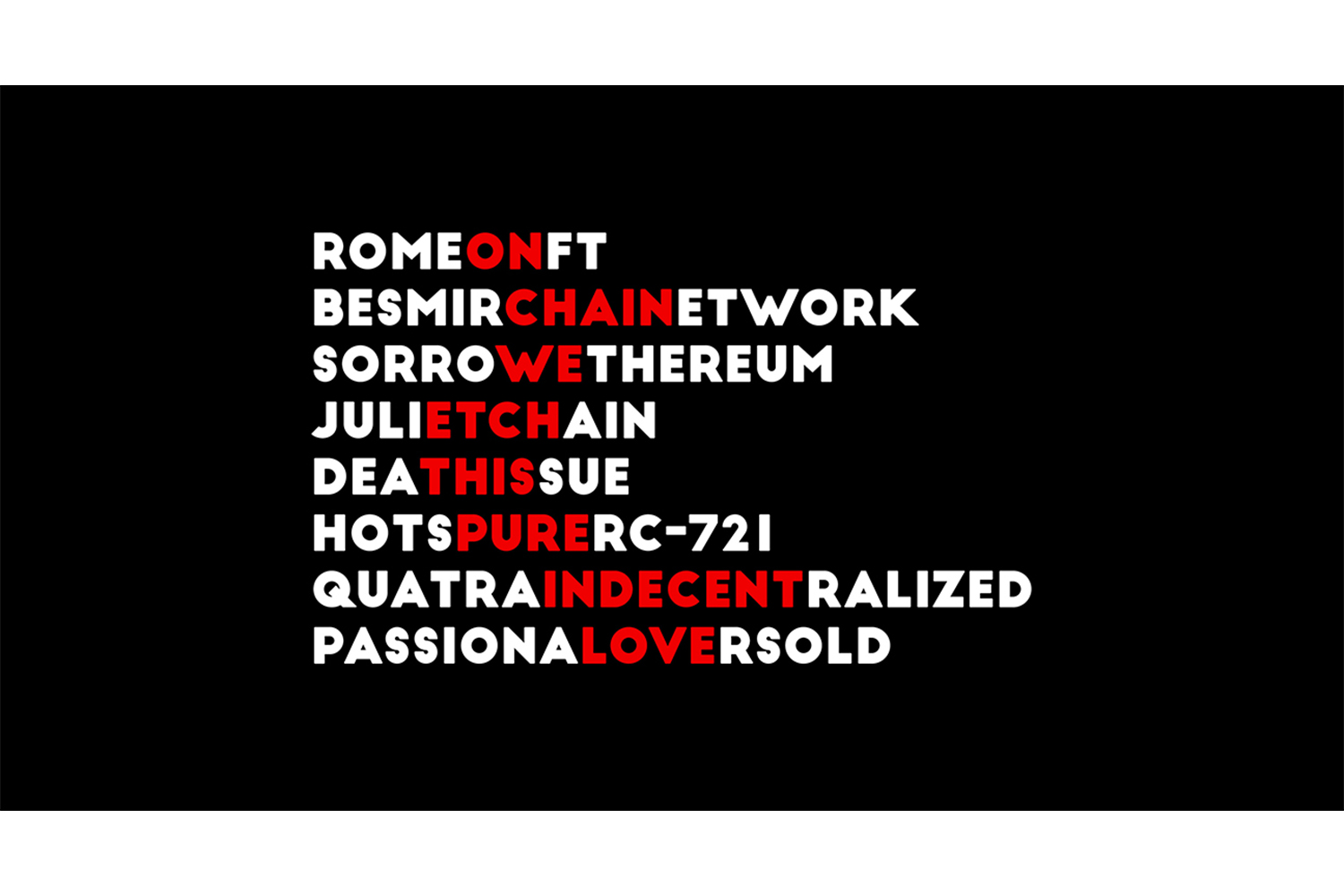 AE: How do you see the future of art on the blockchain after Ethereum’s recent “Merge”? How do you foresee it affecting you as an artist?
SF: I am so happy and proud of the Ethereum community and the many developers and researchers who worked for so long to realize the project. Which other industry can say they have reduced their climate impact so significantly? Everyone who contributed should be very proud. I am looking forward to minting artworks on Ethereum without feeling personally morally culpable for a heavy climate burden, or asking collectors to be culpable with me. As for the conversation around NFTs as a whole, I think The Merge may lay bare a more difficult underlying hesitancy around digital assets and the role of speculation and sales in artists’ works.
GK: The Merge hasn’t had much of an affect on my primary interests in AI and generative systems, although I have a secondary interest in the kind of creative economics that crypto tokens open up. This has influenced me in my work for the Abraham project. As one of the few Ethereum enthusiasts remaining who actually see value in proof-of-work [the pre-Merge mode of achieving consensus], I’m not actually as excited about The Merge itself as others, but I am still excited about the continued maturation of the smart contract ecosystem.

AE: We’d love to hear about any forthcoming projects you might be working on…
GK: Right now, I’m focused on Abraham, a project to produce an autonomous artist, and Eden, a toolkit for making collaborative applications powered by real-time AI.
SF: For anyone passing through Berlin, I have a solo exhibition, “Terraforming,” up at Galerie Nagel Draxler’s Crypto Kiosk. Taking its name from the “terraform,” a tool used to create, update, and destroy remote computing infrastructure, the exhibition explores the Internet and mining, both in terms of hardware and the tensions between cooperation and competition that operate at the incentive layer. Works include sculptures made from waste materials from a local data center, research-heavy video exploring ownership and history of Berlin’s internet infrastructure, and visualizations of the iterated prisoner’s dilemma. I also have some works, including my project, Lifeforms (2021), in “DYOR” at the Kunsthalle Zürich and Kristianstads Konsthall in Sweden, both opening this October. Finally, one of my secret non-secrets is that I love modernist painting, and I’m currently working on a piece in response to Agnes Martin, dealing with the materiality of screens, but that’s all I will say on this for now 🙂

The exhibition, “Ecotone,” continues on Feral File, celebrating the work of the Glitch community of artists and technologists.

Sarah Friend is an artist and software developer who specializes in blockchain, games, and the p2p web. Her work critically examines technology and interfaces, in both content and form, considering system-building as a narrative impulse. She is a participant in the Berlin Program for Artists; a co-curator of Ender Gallery, an artist residency taking place inside the game Minecraft; an alumni of Recurse Centre, a retreat for programmers; and an organizer of Our Networks, a conference on all aspects of the distributed web. She has exhibited globally, including at Galerie Nagel Draxler, Berlin and Cologne; Illingworth Kerr Gallery, Calgary; Kunstverein, Hamburg; Oökultur, Linz; suns.works, Zurich; and Floating University, Berlin.

Gene Kogan is an artist and programmer who is interested in autonomous systems, collective intelligence, generative art, and computer science. He created ml4a, a free book about machine learning for creative practice, and regularly publishes video lectures, writings, and tutorials to facilitate greater public understanding of the subject. Kogan initiated Abraham, an open project to create an autonomous artificial artist. 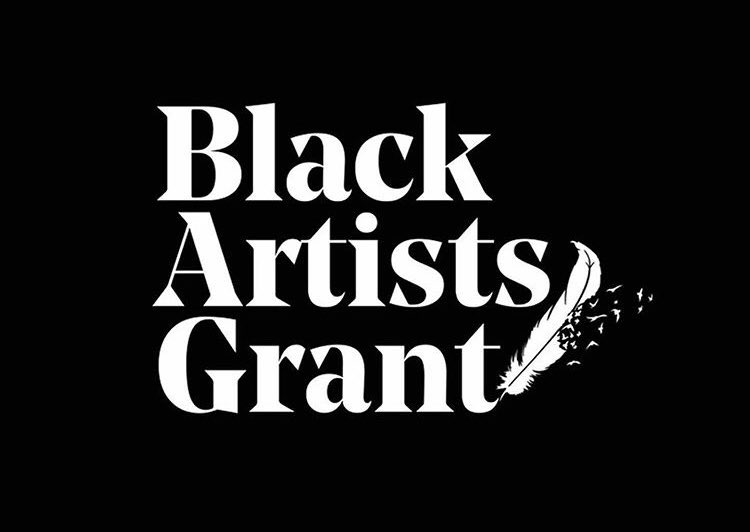 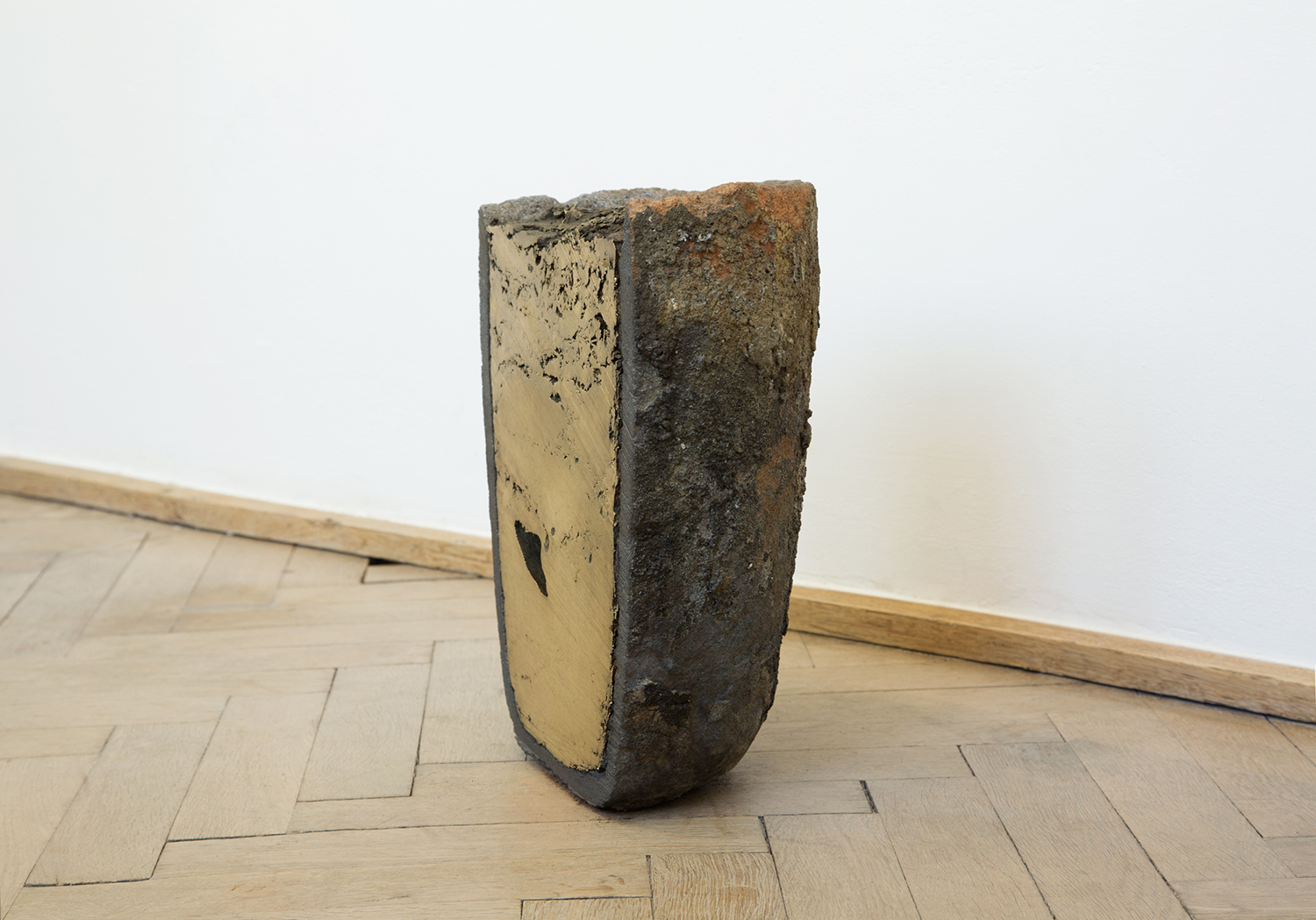