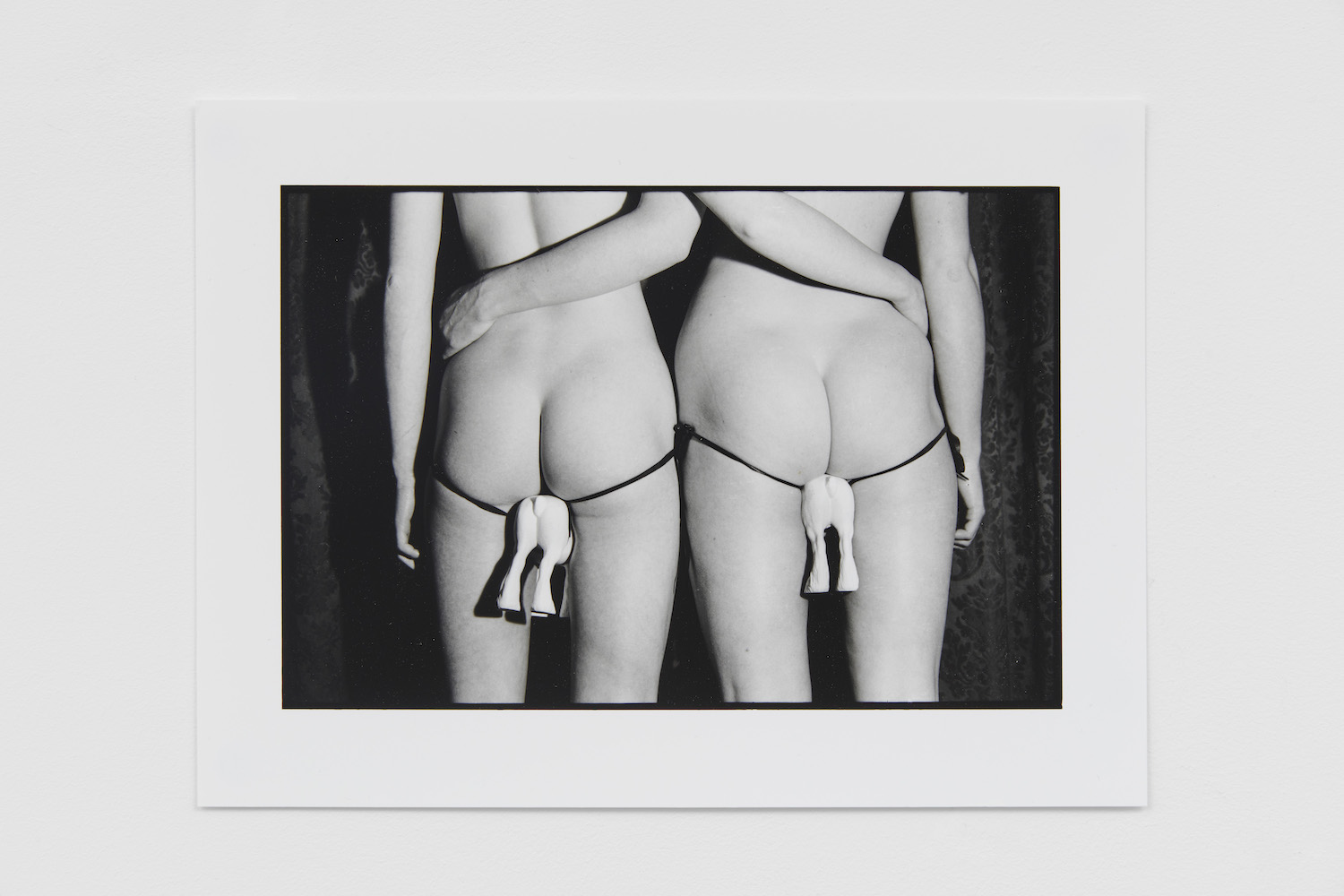 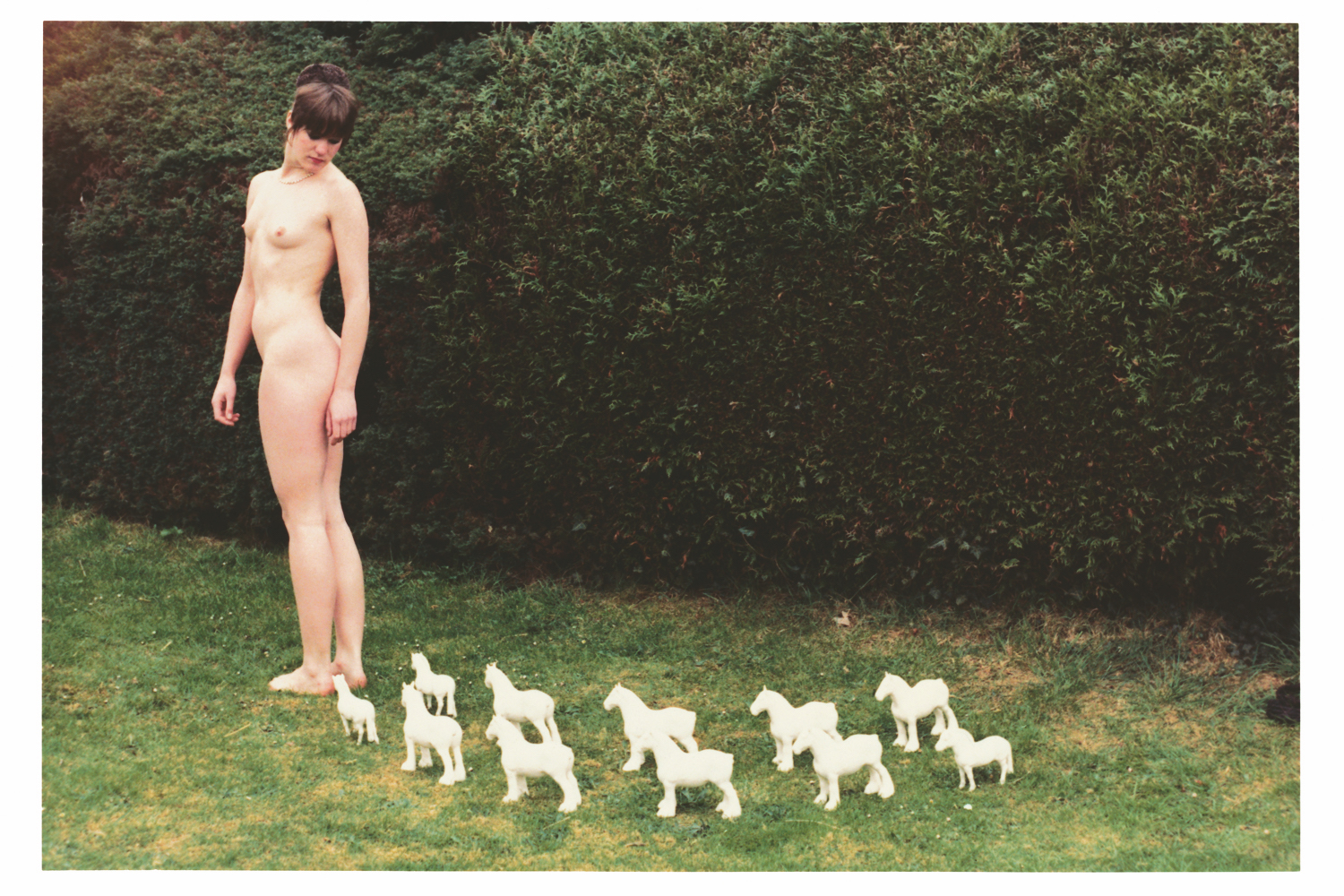 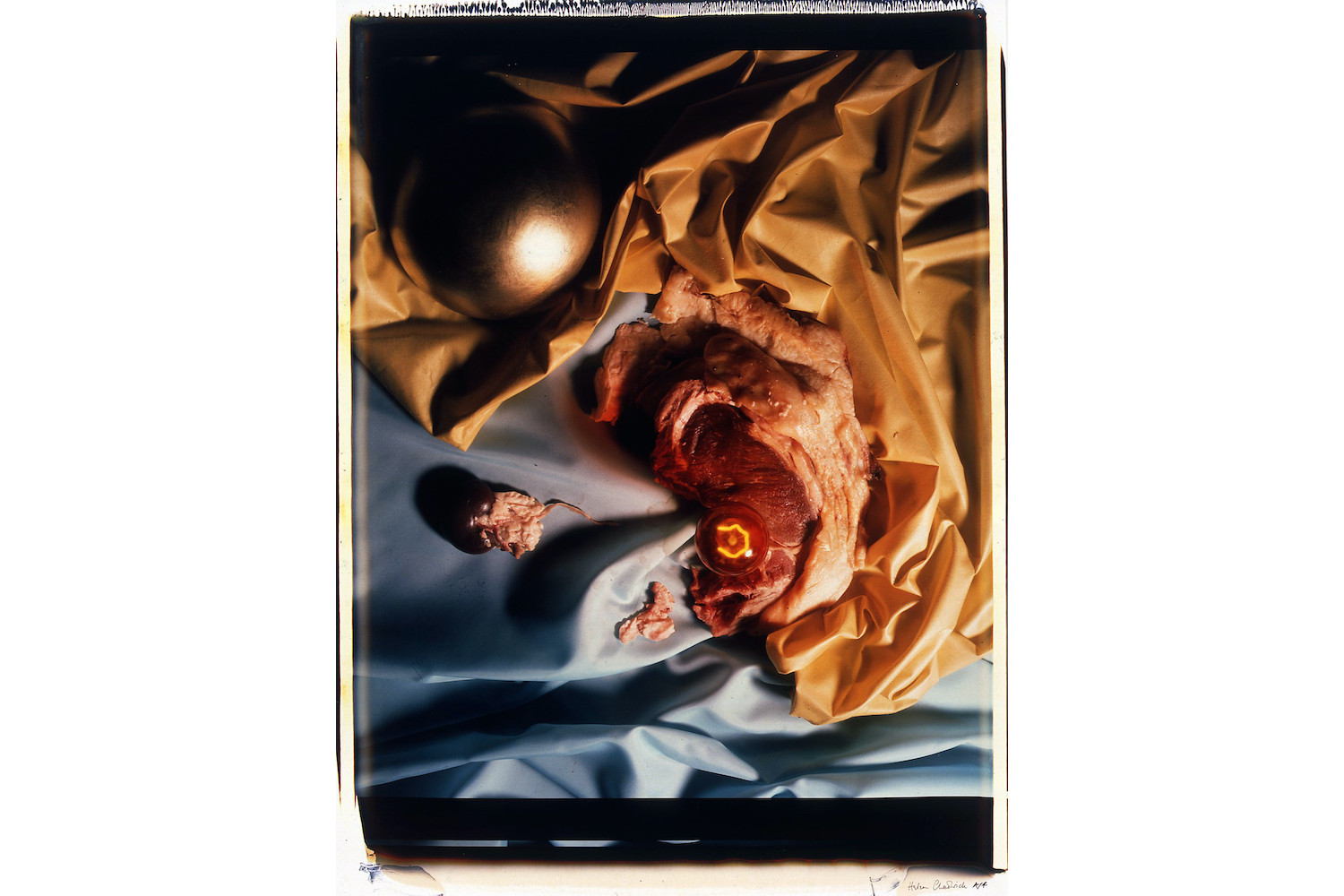 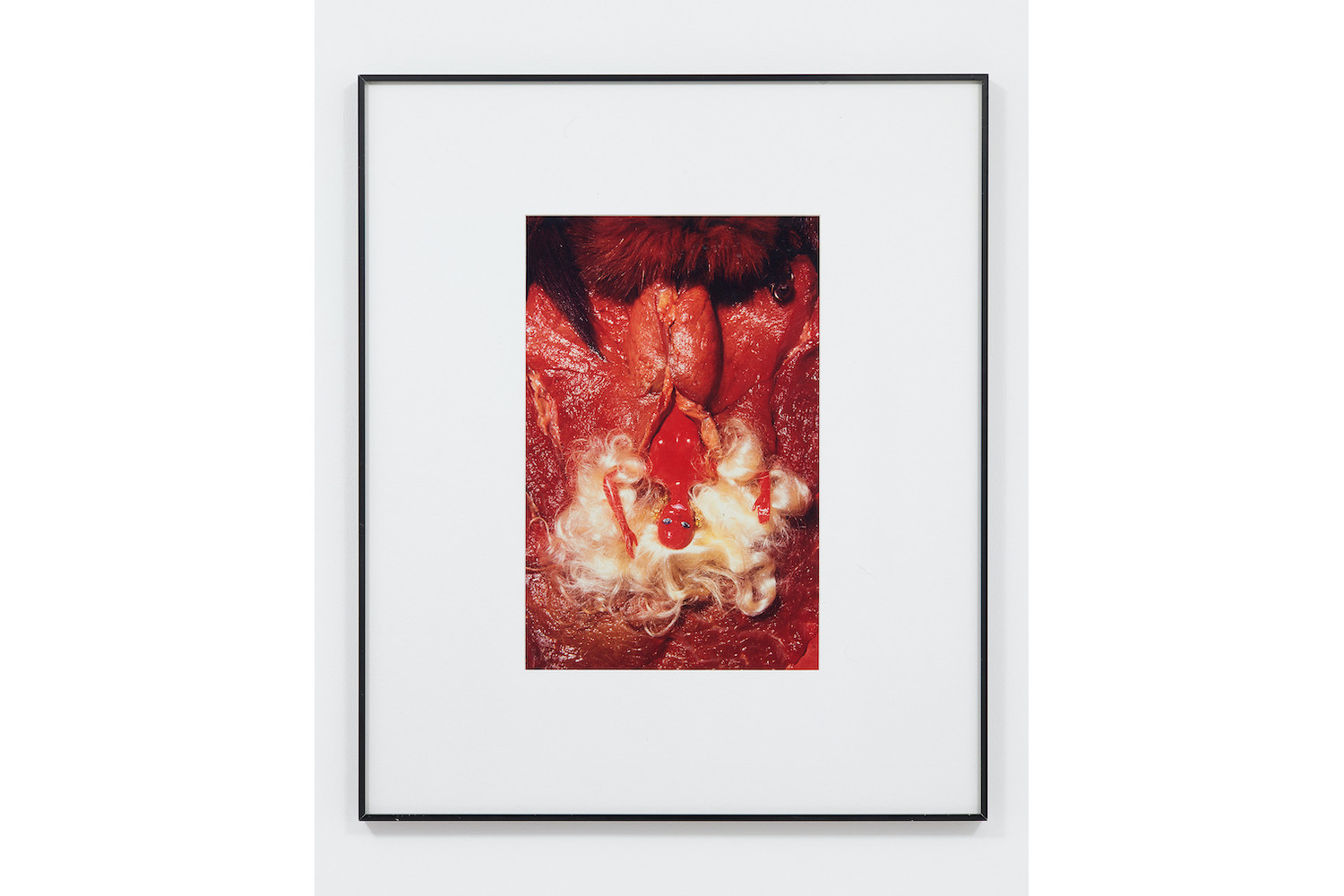 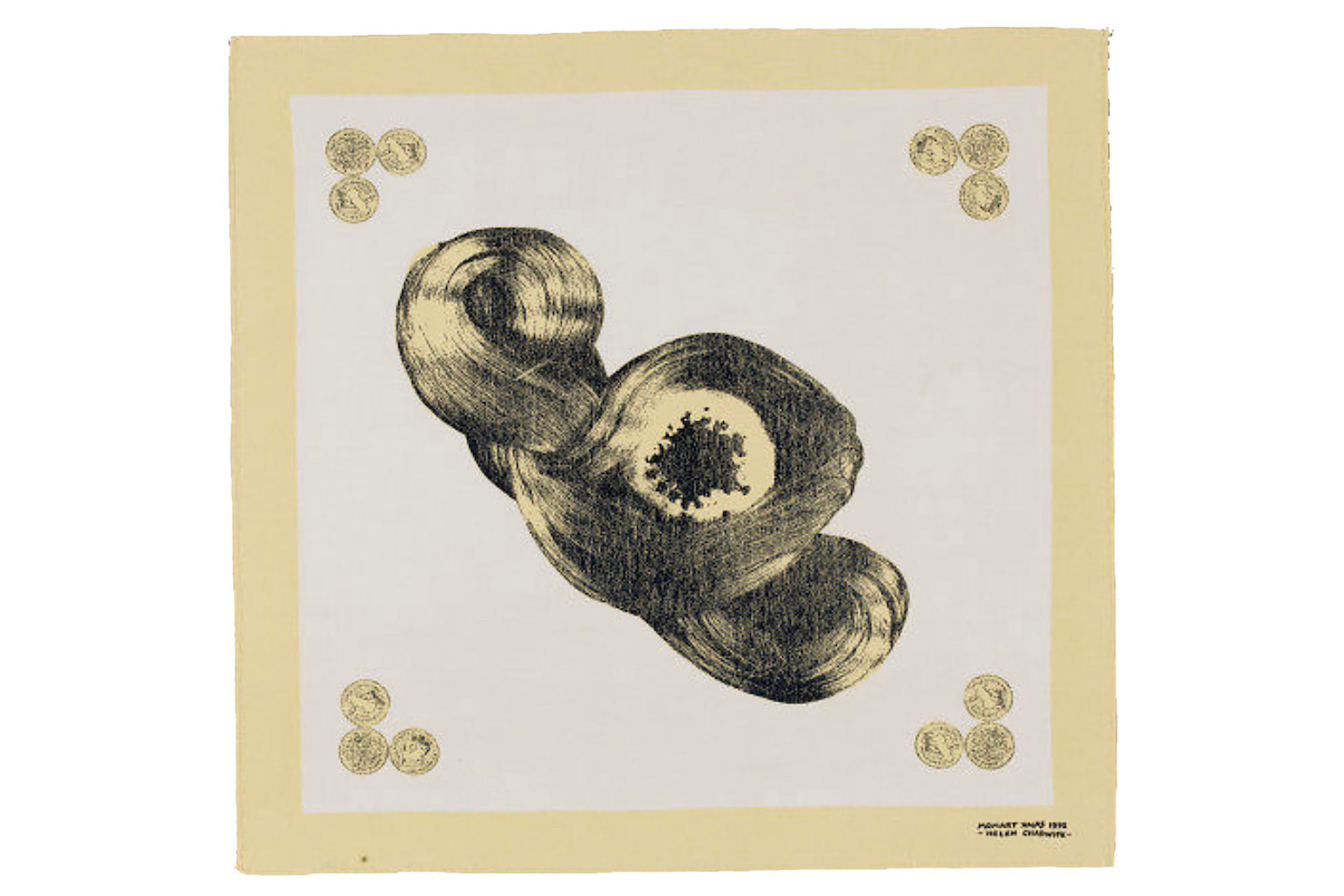 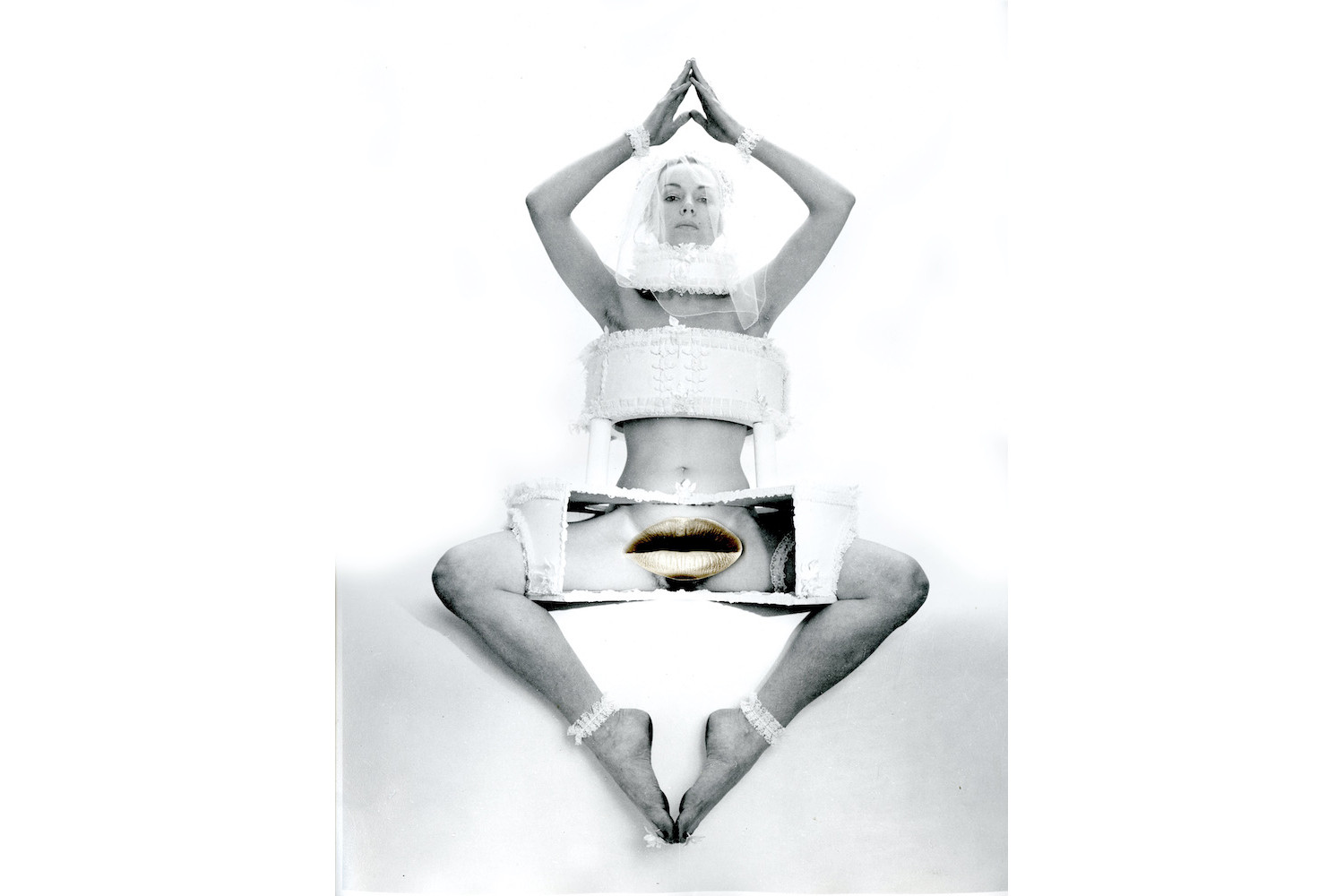 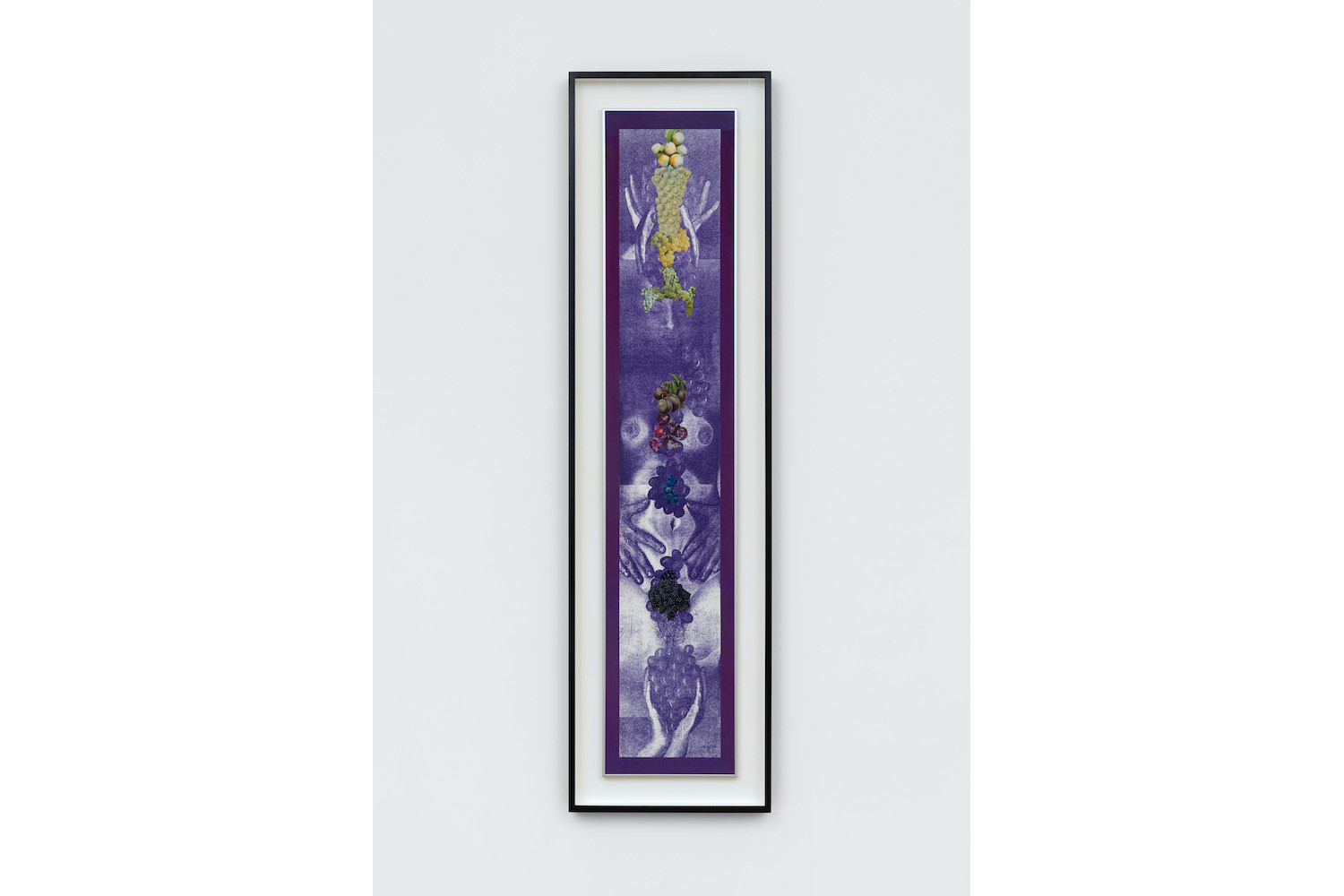 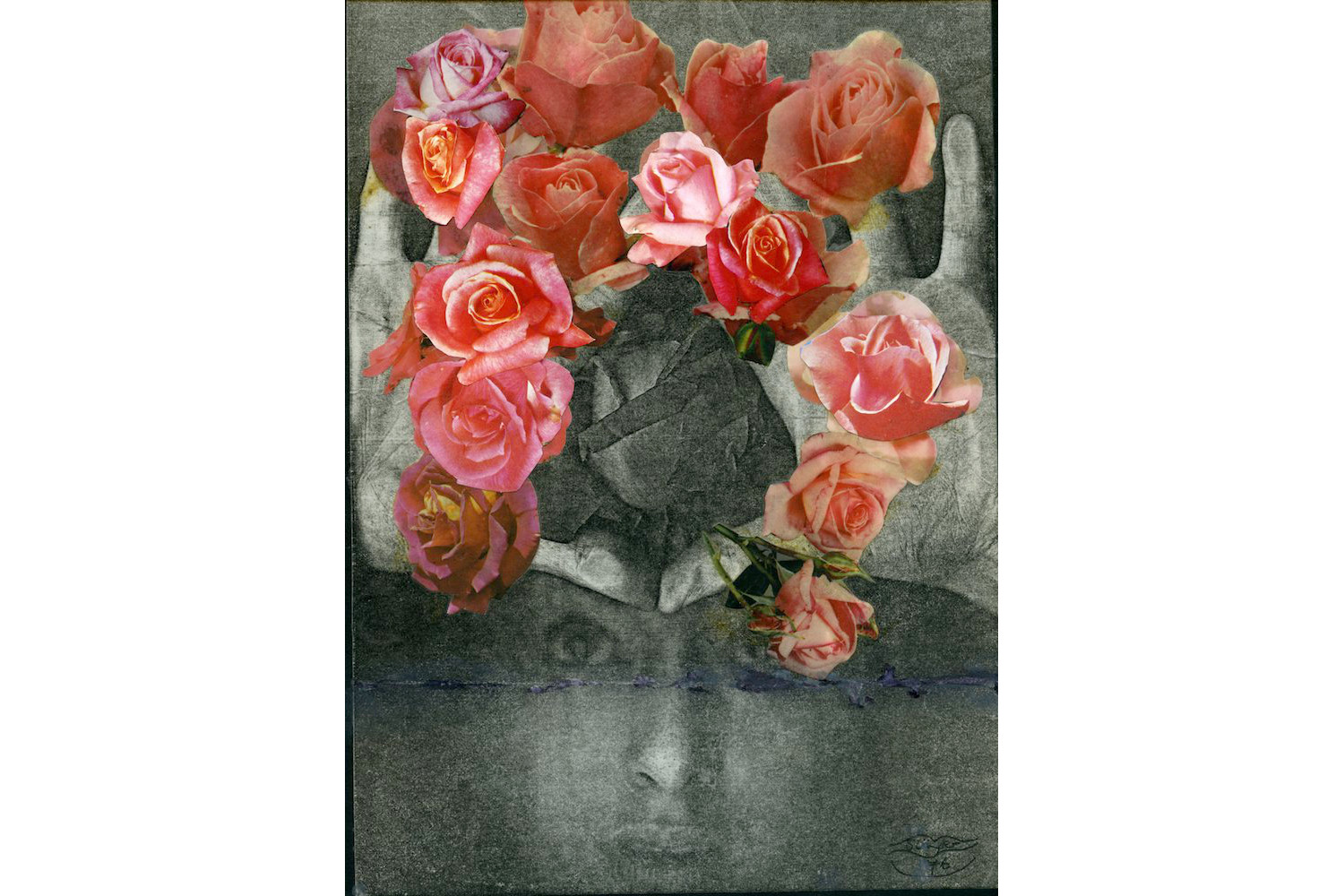 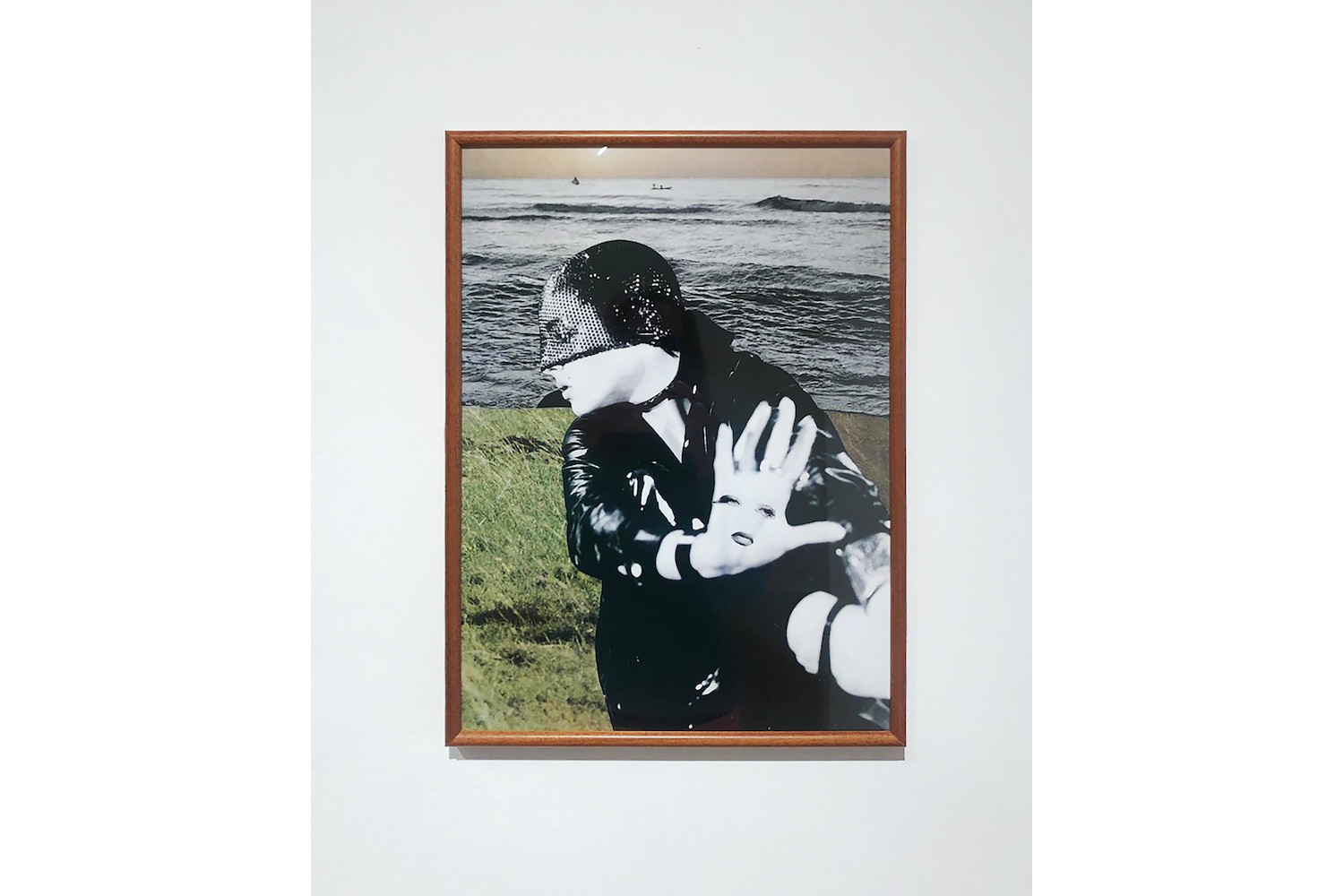 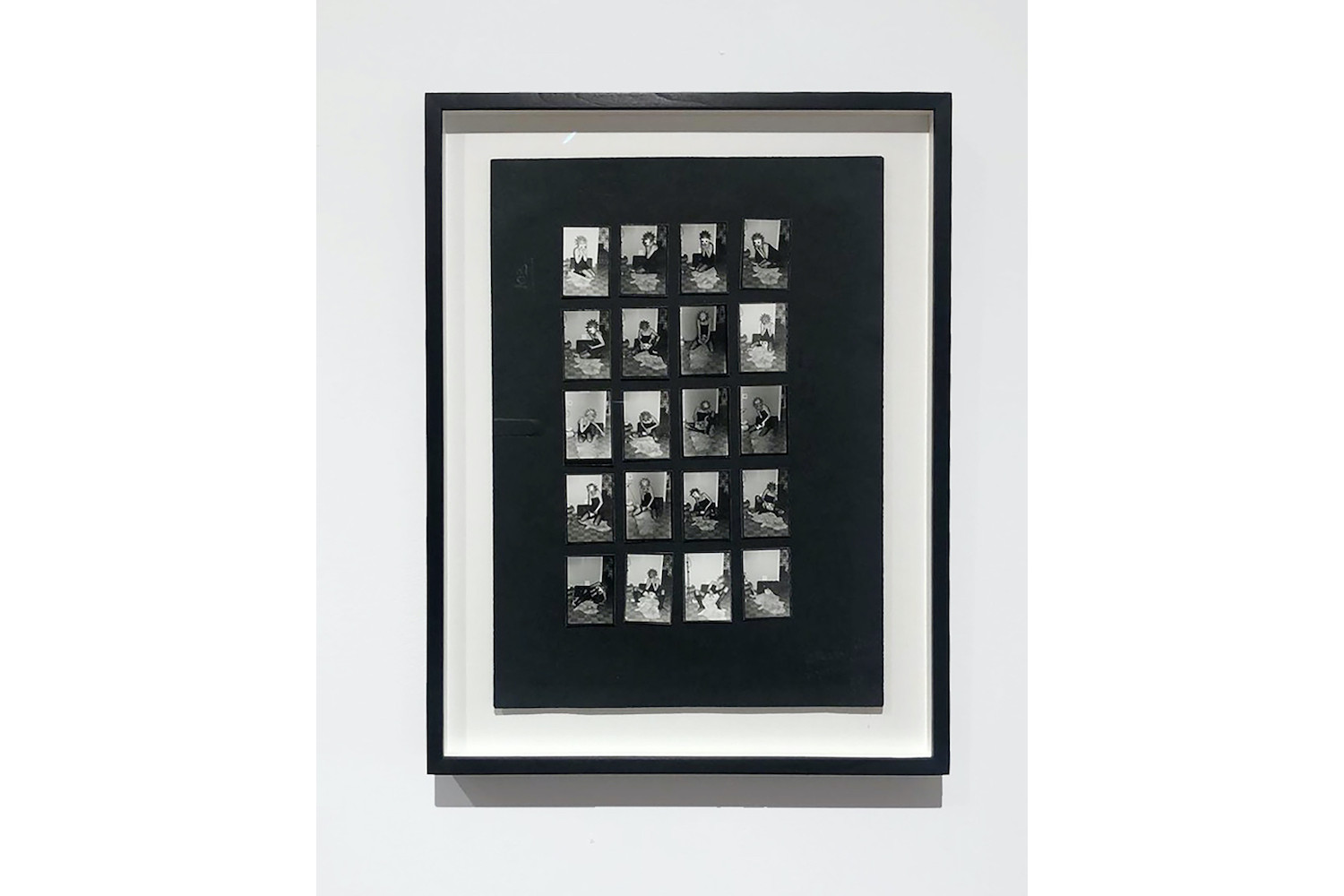 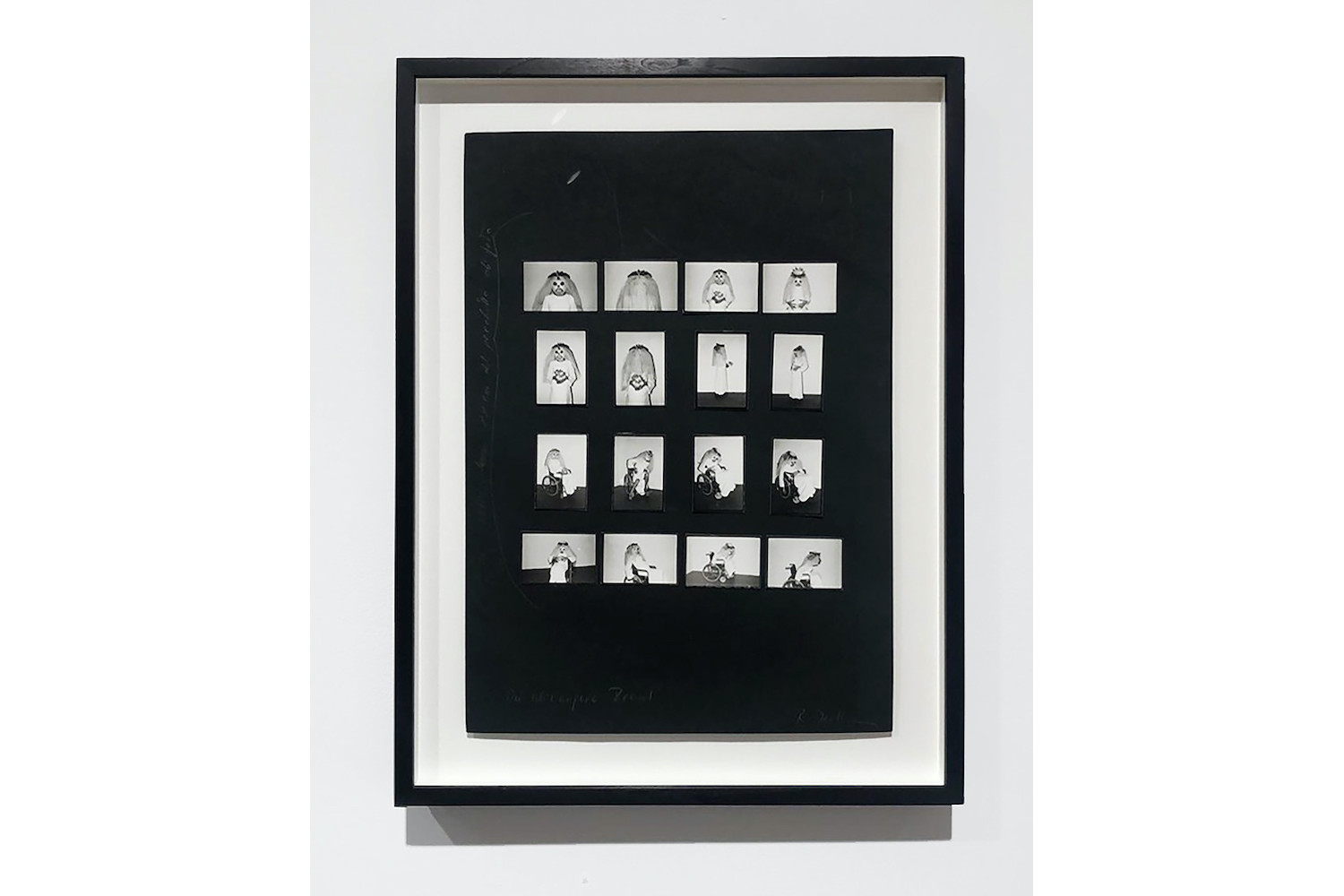 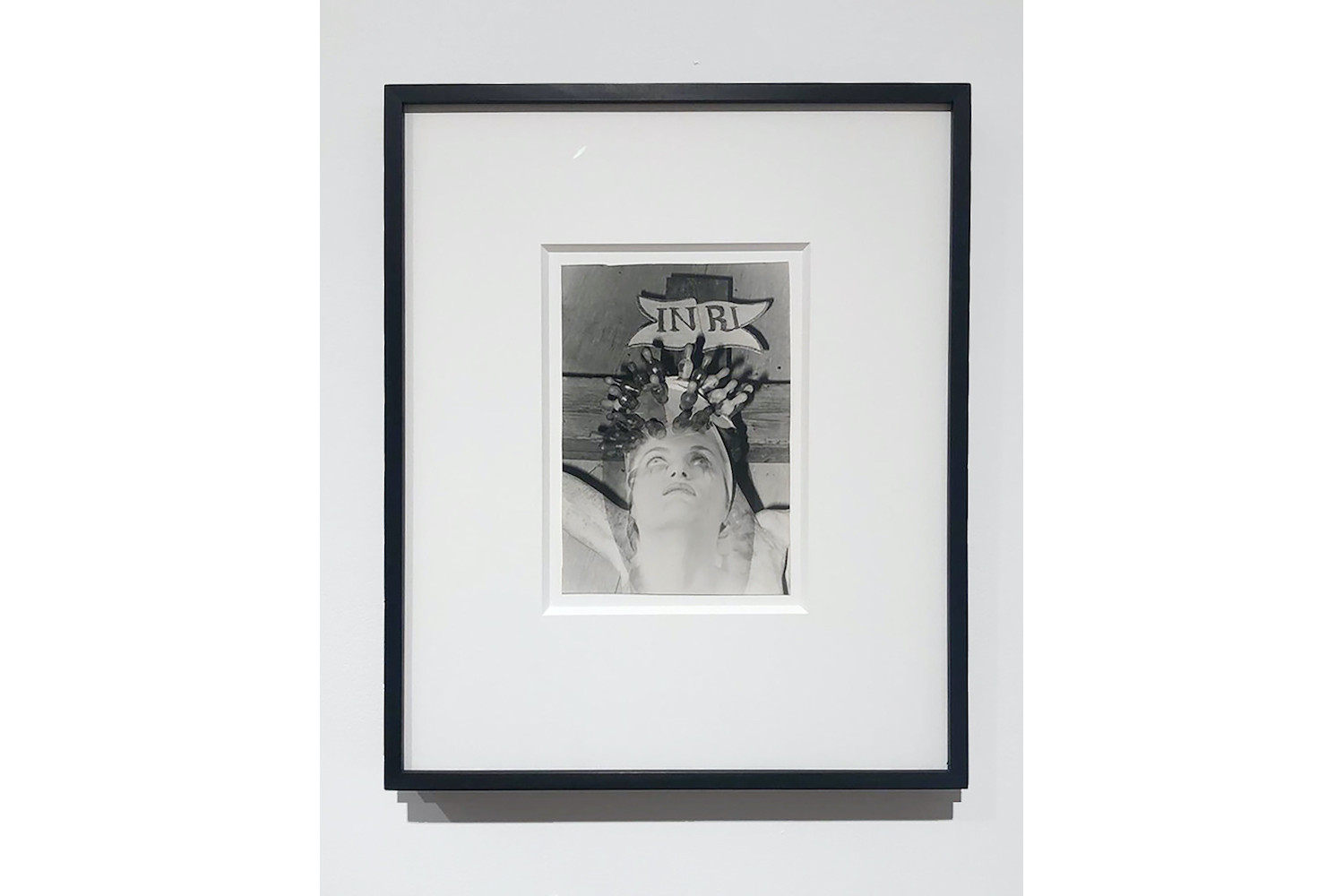 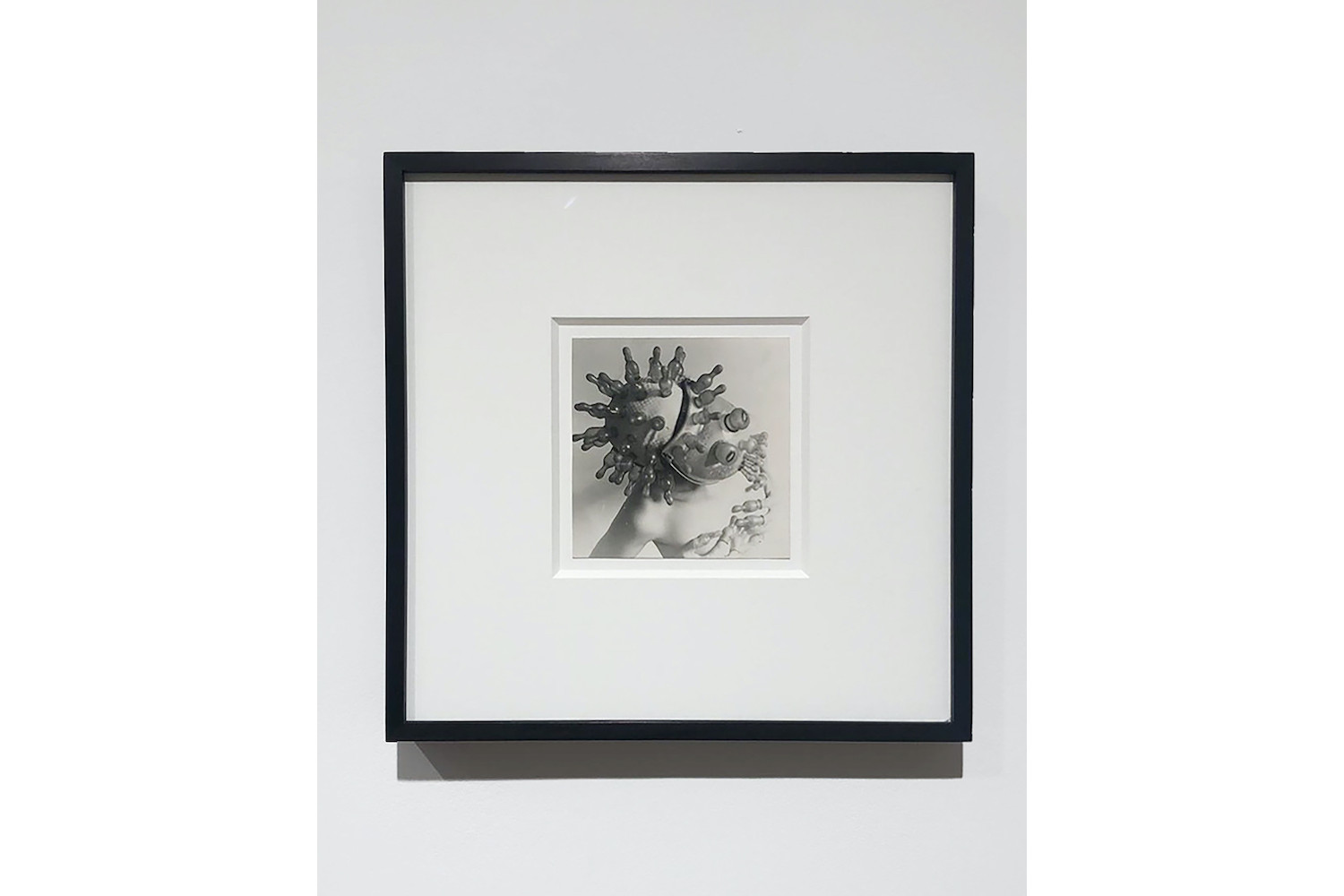 Curated by Philomena Epps, “Bodily Objects” brings together a selection of work by four feminist artists —Penny Slinger, Rose English, Renate Bertlmann, and Helen Chadwick— exploring ideas of surrealism, sexuality, and subversion. Through avant-garde performance, photography, collage, and sculpture, each artist developed unique and experimental ways in which to represent embodiment, often conflating the corporeal with the material, through blurring or substituting the body with objects, food, and flora. Whether libidinous, absurd, or menacing, the sustained tone is one of wry humour and satire, situated in resistance to the representation of women typified by the crude male gaze.

In 1973, Penny Slinger initiated the Bride’s Cake Series, in which she represented herself as both bride and wedding cake. Her spread legs an allusion to the ritual of cutting the ceremonial slice, the images destabilised the object-subject binary by fashioning the female body as a symbolic, consumable item. Slinger’s longstanding interest in the Surrealists can be gleaned by her early collages, such as Don’t look at me (1969), while her later works made with Xerox are infused with an iconography of eroticism and plenty, mixing full frontal prints of her naked body with bouquets of roses and bunches of grapes.

The pageantry of horse dressage was interpreted by Rose English as a metaphor for the fetishisation of women’s bodies. The 1974 photograph Rose and Athene Riding, in which two porcelain horse statuettes are playfully positioned under the model’s nude bottoms, as if saddled to ride, is indicative of her witty approach to objectification and spectacle. These white toy horses accumulate in much of her early work, notably in the choreographed performance Quadrille at the 1975 Southampton Horse Show, in which English dressed her six performers in leather harnesses attached to real horsehair tails and high heels made from hooves.

Renate Bertlmann began using rubber teats and condoms in the late 1970s, surveying their sensual textures and visual potential as substitutions for genitalia and erogenous zones. Akin to ready-made objects, the latex teats were also grafted onto wearable items, such as the crown of udder-like nipples in Tender Christ (1977), or protruding from the disturbing mask worn in Tender Pantomime (1978). These photographs, captured from performances she staged in the privacy of her studio, illustrate Bertlmann’s engagement with tenderness and aggression, uneasily oscillating between seduction and horror.

In Helen Chadwick’s practice, fuelled by her engagement with decay and nature, the body is often fragmented, dismembered, or substituted altogether. The Meat Abstract (1989) Polaroid series, with offal arranged like a still-life painting, convey a simultaneously compelling and grotesque display of degendered, anonymous flesh. The notion of raw meat as a synecdoche for the human body is taken further in the blood-red Birth of Barbie (1993), the stereotypically gendered doll arranged as if mid- parturition.

As the first comprehensive survey of Ana Mendieta’s oeuvre in the UK, this retrospective celebrated the artist’s unique visual language…