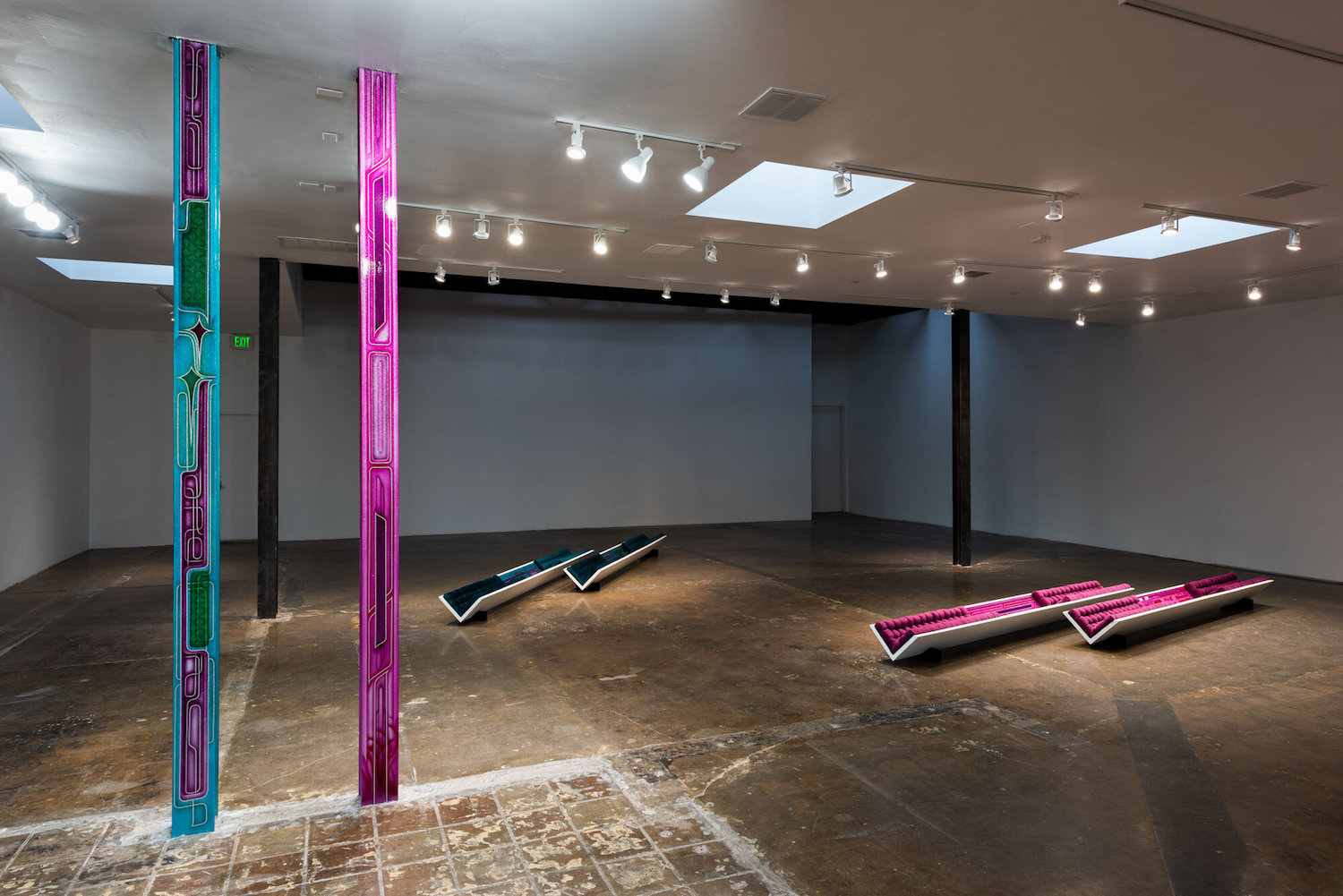 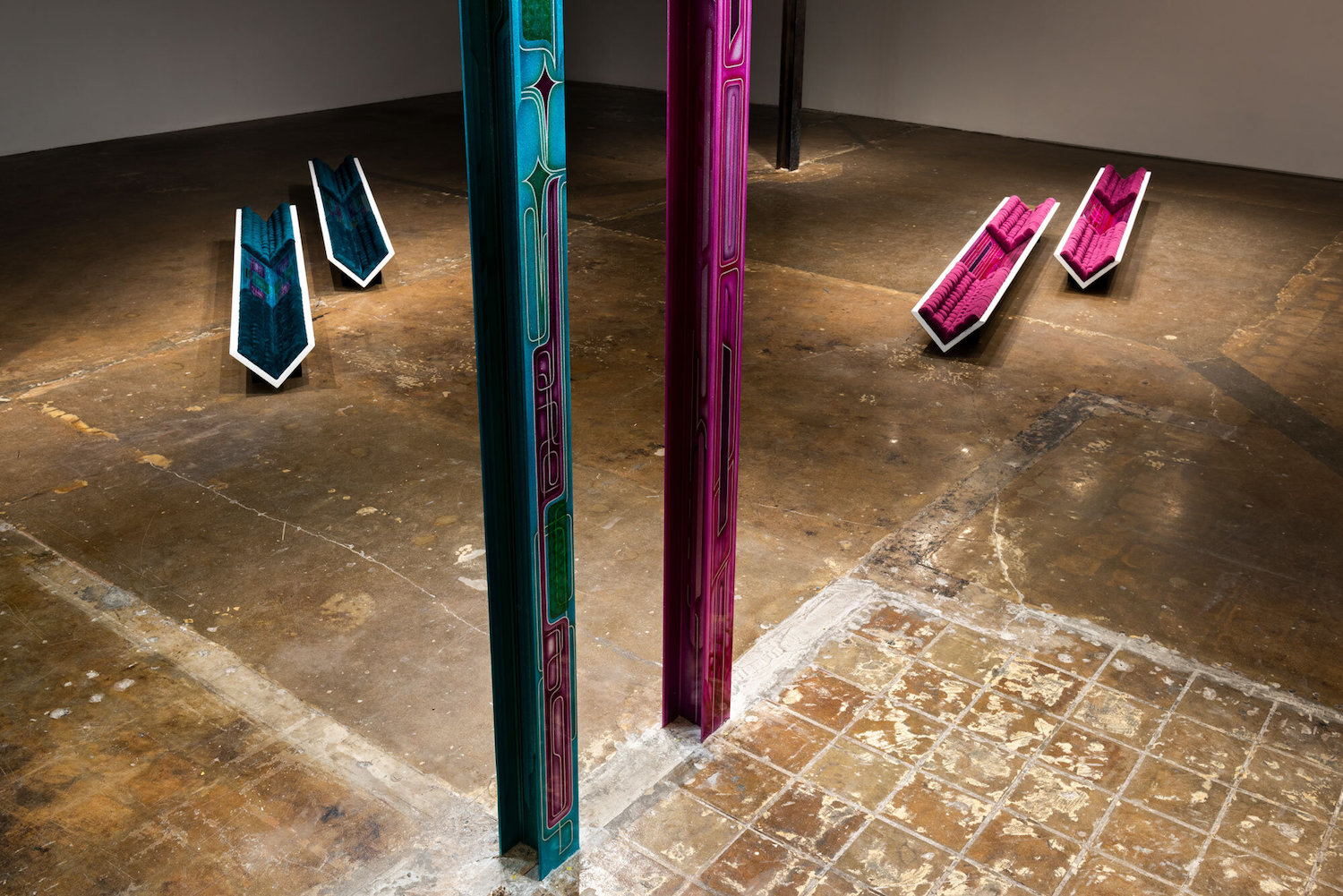 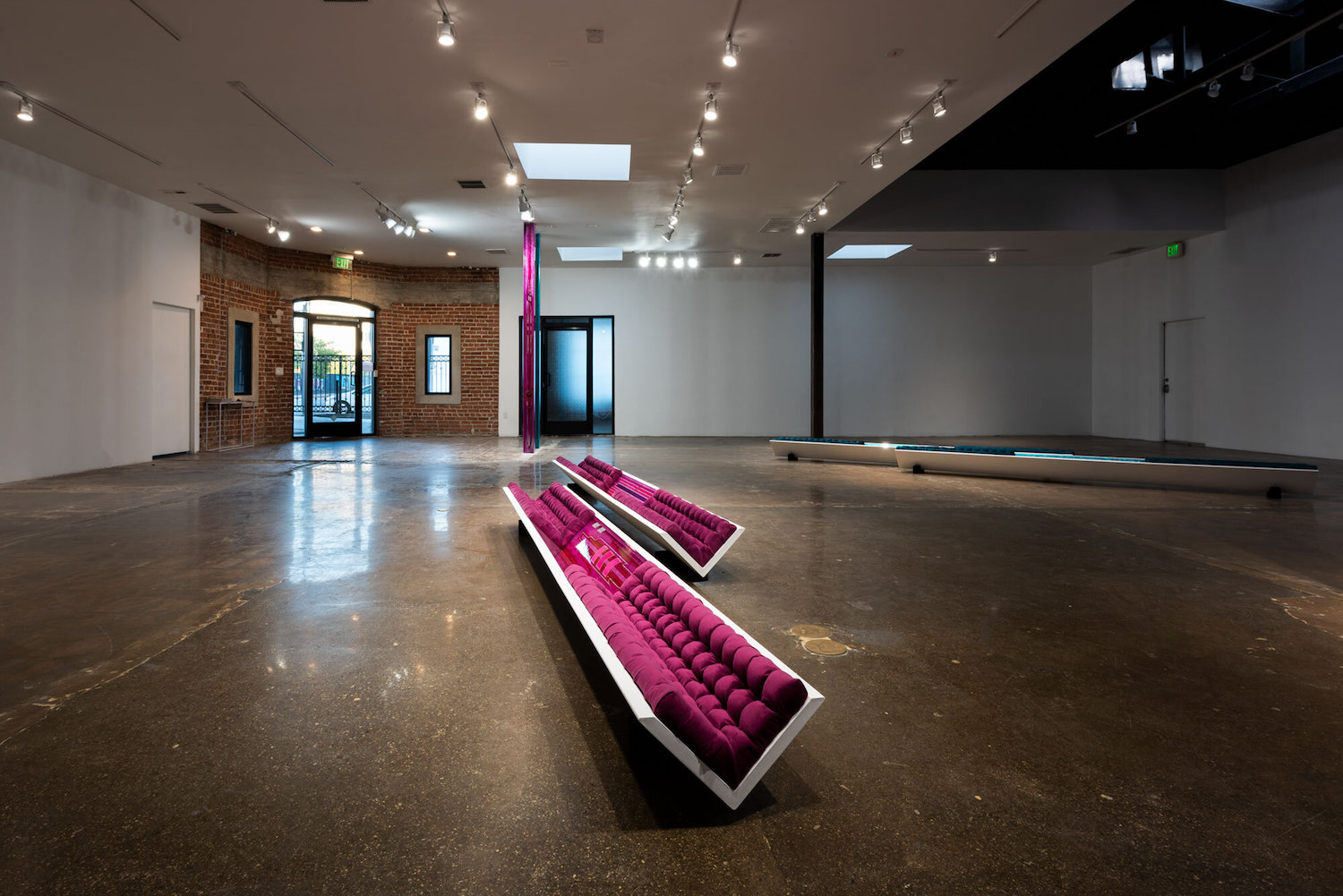 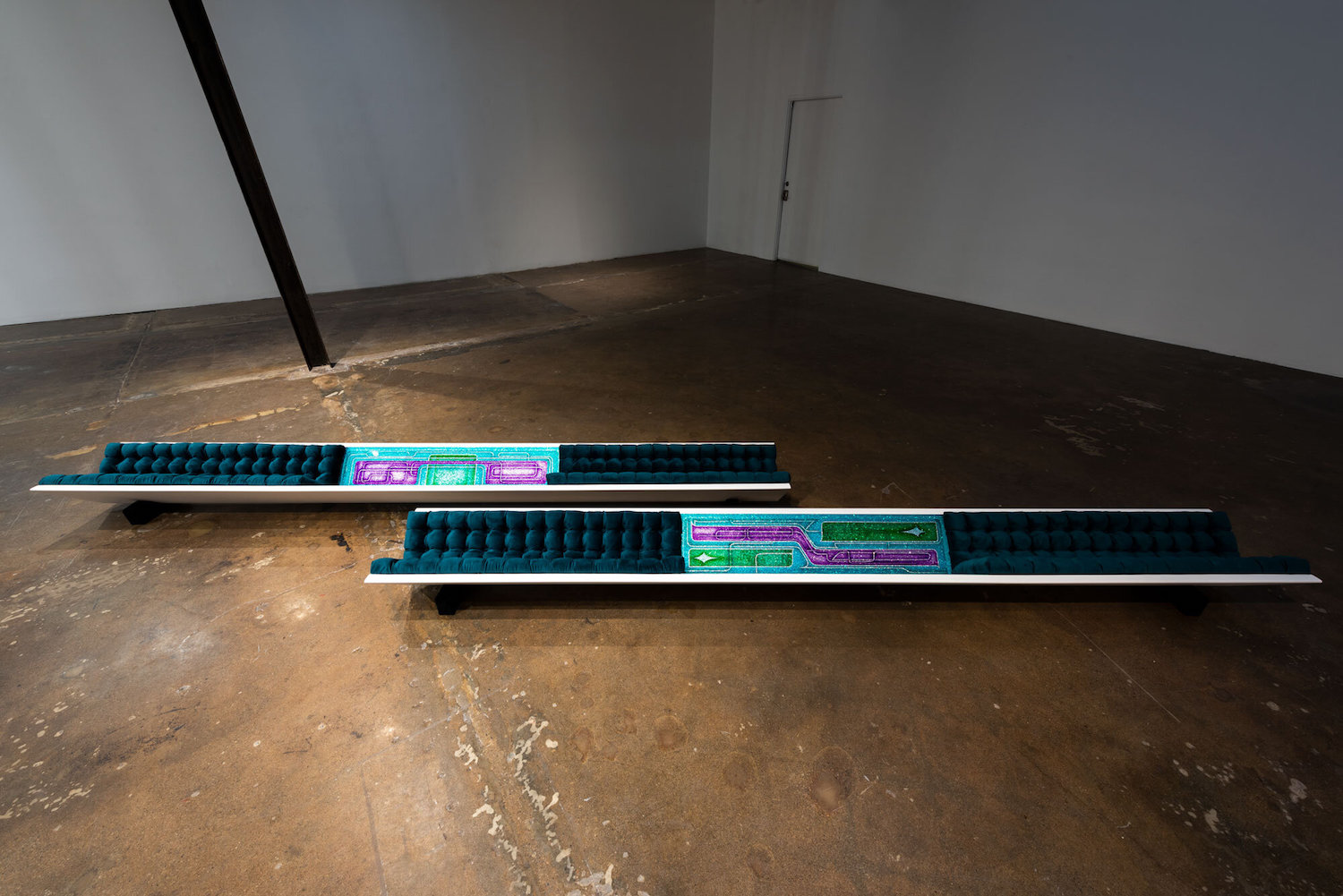 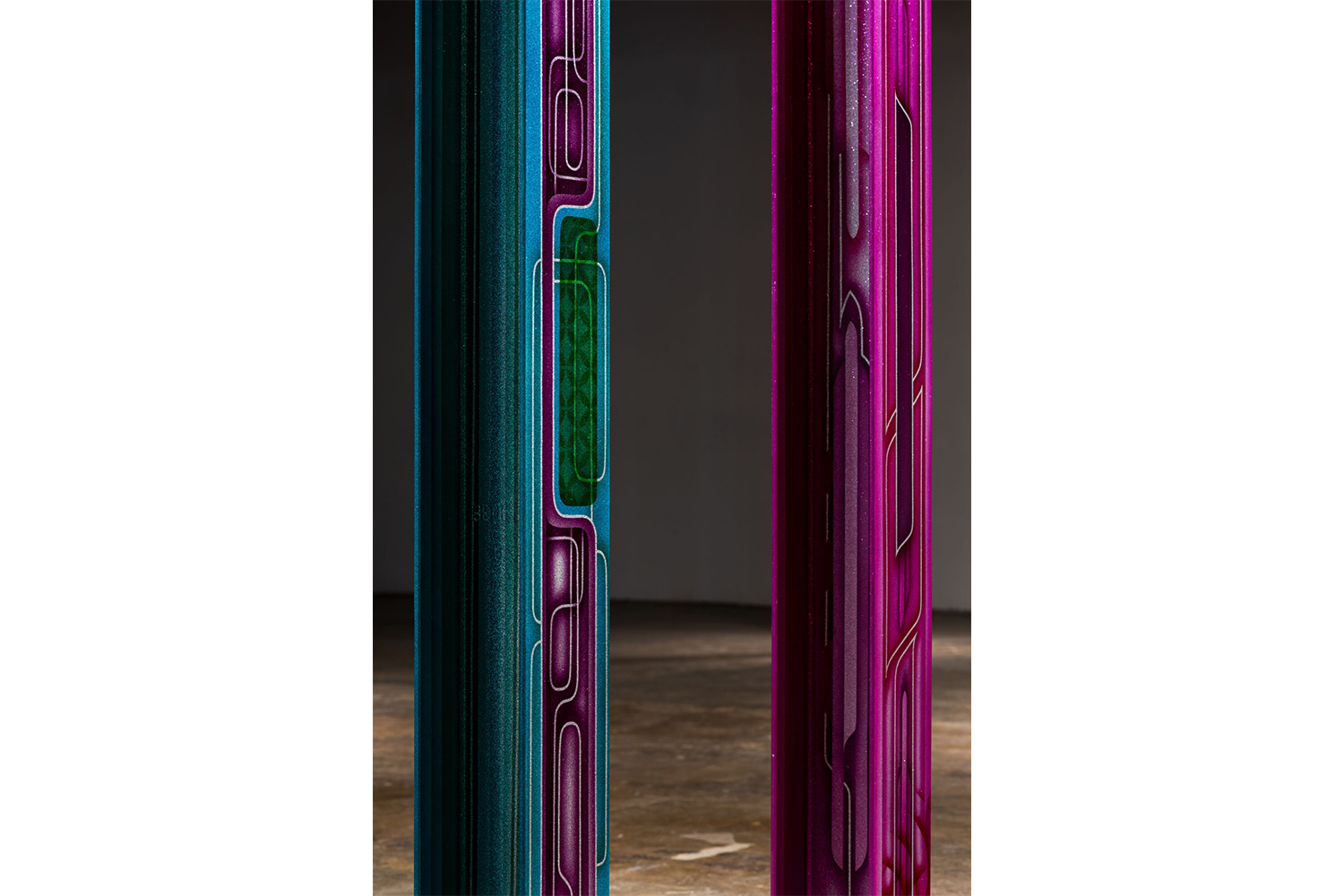 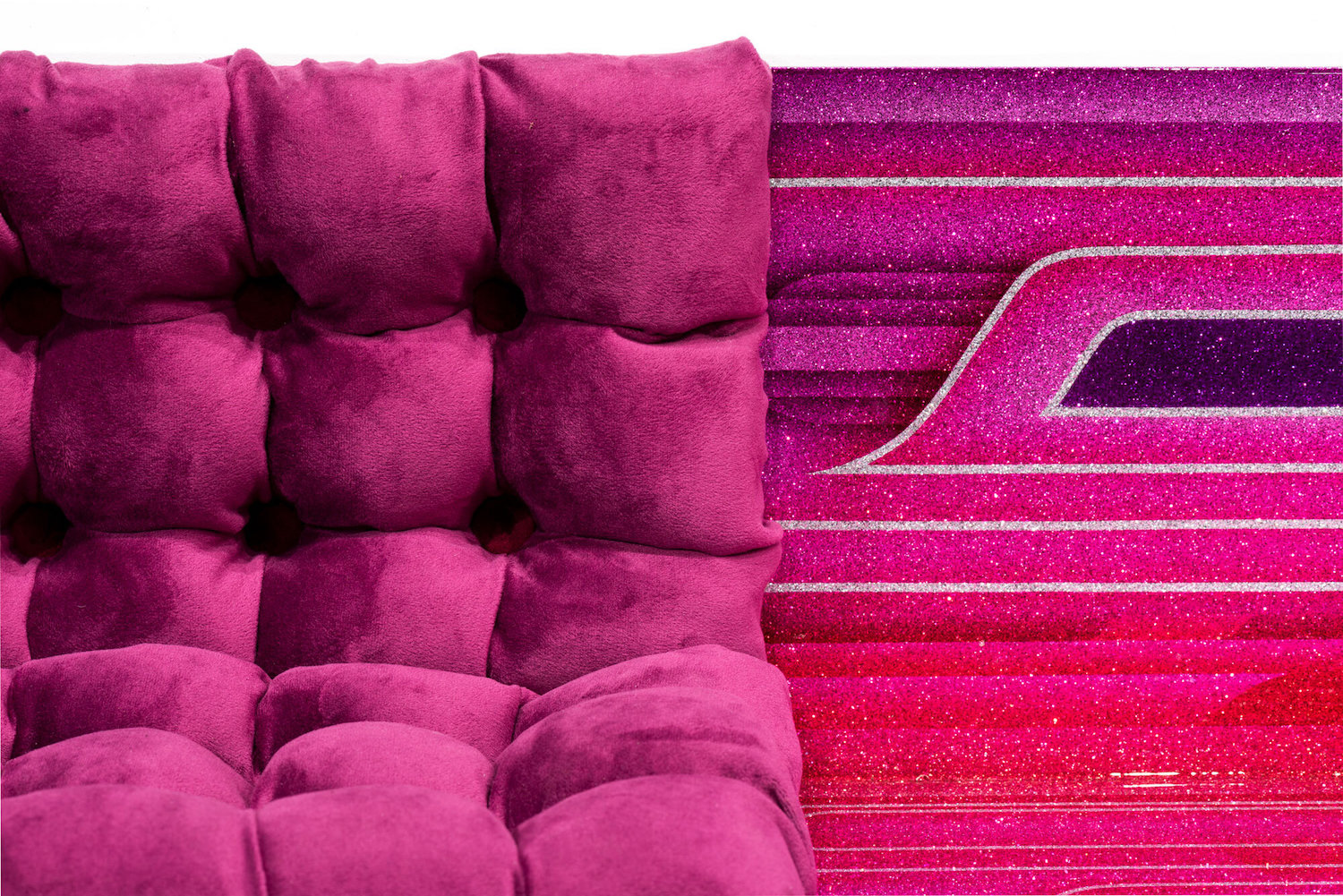 As “Some Clap While Others Reach” is coming to a close at the end of this month so does its current title, which for the afterlife of the exhibition is scheduled to change to “In relation”. It is from the position of this new title and future understanding of the work that I am responding to it.

“In relation” connotes more than the title of Postcommodity’s show at LAXART, or the work that it encompasses; it signifies the bond between the work, the artist collaborative and the gallery.

Two H-beams, standing closely together near the entrance of the space, are painted in the style of custom lowriders––a collaboration with Edgar Hernandez who owns a car customizing shop in Harbor City. A part of the gallery’s existing architecture previously overlooked yet bearing significant weight is now made visible, or re-visible. The beams were always there but our gaze was directed away from them, like in most art institutions, to art in the space around them. Both a metaphor for “the Latino labor force upon which the city’s economy rests”1 as well as a literal site of institutional critique, the candied H-beams become the off-center of attention and disclose the simultaneity of in/visibility.

Beyond them lay two carefully split open white columns. Their insides carry the same lowrider custom paintjob, and are inlaid with tufted velvet cushioning at both ends. The color-location correspondence between the H-beams and the broken-open columns––green-blue hues on the east side and fuchsia hues on the west side–– allude that the columns could, or may already have encased the beams before. Their internal aesthetic and delicacy indicate a protective function; they are to hold something precious or sacred. In conversation with Hamza Walker it becomes clear that these intersections will indeed, like caskets, cover the casted beams when the run of the exhibition is over at the end of this month.

As a consequence of the painting method the work is a permanent installation; visible, however, only now and at future unveilings designated by Postcommodity. These unveilings “they would like to consider as ritual in bearing, a ritual that over time will invest the work with a spiritual significance.”2 In the meantime, the cases protect the beams and LAXART their location. As such, in relation through communication, sharing space, trust and hospitality the connection between the work, the artists and the space now exists.

Vacillating between tangibility and invisibility, the strength of the work lies in the depth of its minimalism. What we see is a pair of painted H-beams and their cases that will detract them from sight. Yet, while visually or rather spatially, so minimal with the potential to become invisible even, there are so many layers to this work. Aside from the conceptual layering that intersects institutional critique with postcolonialism and brings into focus “a shared Native American lens,”3 the work is built from twenty layers of paint between its primer and its final coat. Within these layers we can see various colors and glitter, but also lace like and floral patterns.

I have written elsewhere on Mieke Bal’s concept of a skin-deep perspective, that “in the depth of a surface we are lined with a site of expansion,”4 by which I mean a site of communication––which can be through any medium you choose. I refer to this concept of surface depth, following Bal, as it places us in a baroque point of view, which I believe touches upon the depth of this work. Skin-deep, according to Bal, connotes the past being enfolded in the present, “that the ‘thing’ we ‘see’ as a remote historical [but also, I would say, geographical or otherwise distanced] object is molded within our present being.”5 The skin of the body as a metaphor for the fold that places us in relation to each other. Perhaps inactively, we contribute to each other’s being and environment constantly.

The painted beams have excavated the relationships they already held and introduced a new way of seeing through a shared Indigenous lens, while situated in a type of space that traditionally incorporates a baroque lens––art institutions being an invention of that era; a lens that ironically is both a source and product of colonialism. A push and pull continues, and I wonder what will happen to our ways of seeing when In relation is taken out of sight and we no longer can see the painted H-beams or the interior of its coffins. The focus of the show may move further off-center, and shift to the understood connection between the parties that brought it into being. In anticipation of its future state I keep thinking of these words by Zeenat Nagree: “In the absence of a protective eye, whenever the evil eye touches a body, it works like a scalpel. The surface is cut open and something vital is extracted.”6

LA><ART will turn ten years old in 2015. How has your vision evolved since the foundation? We started in 2005…