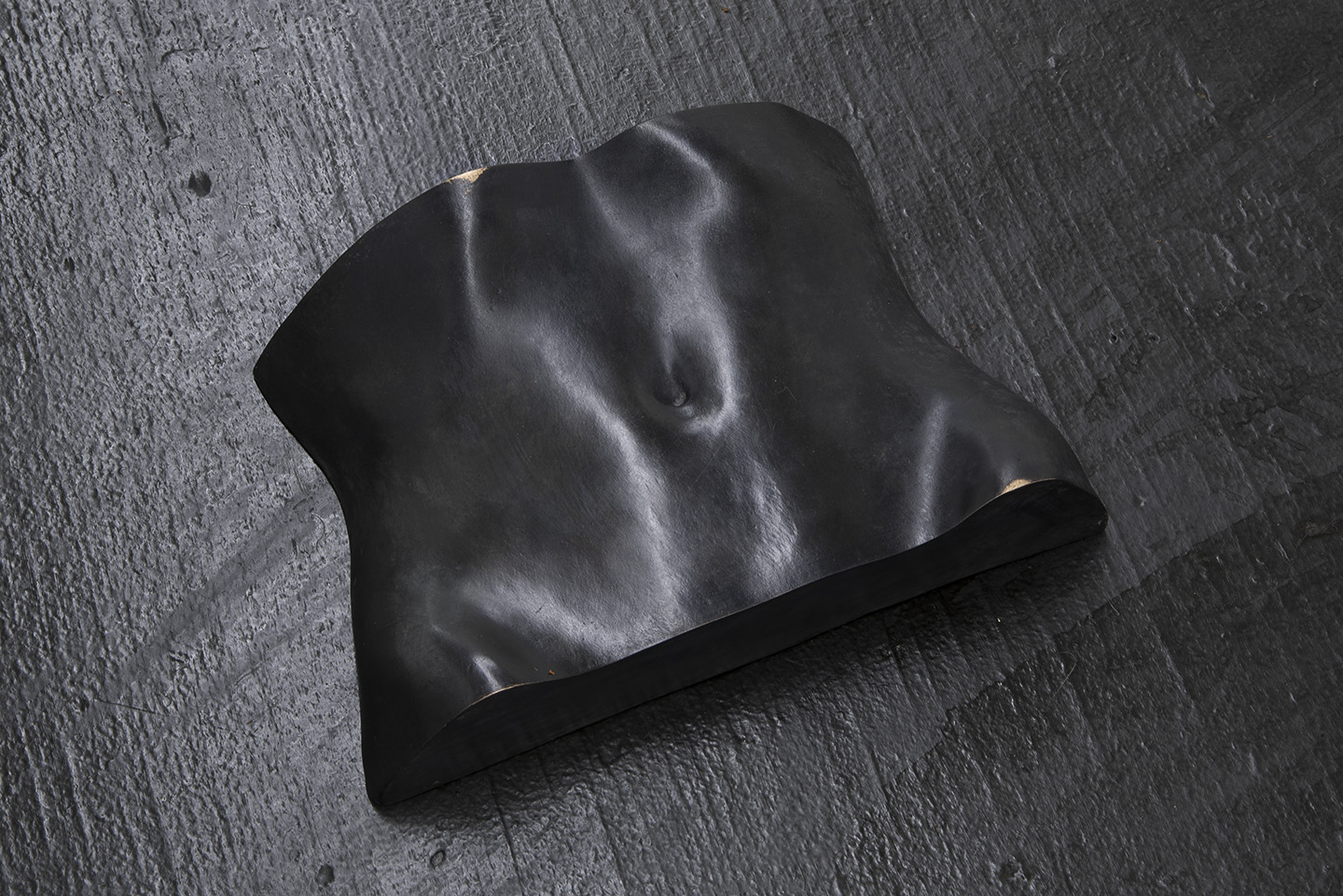 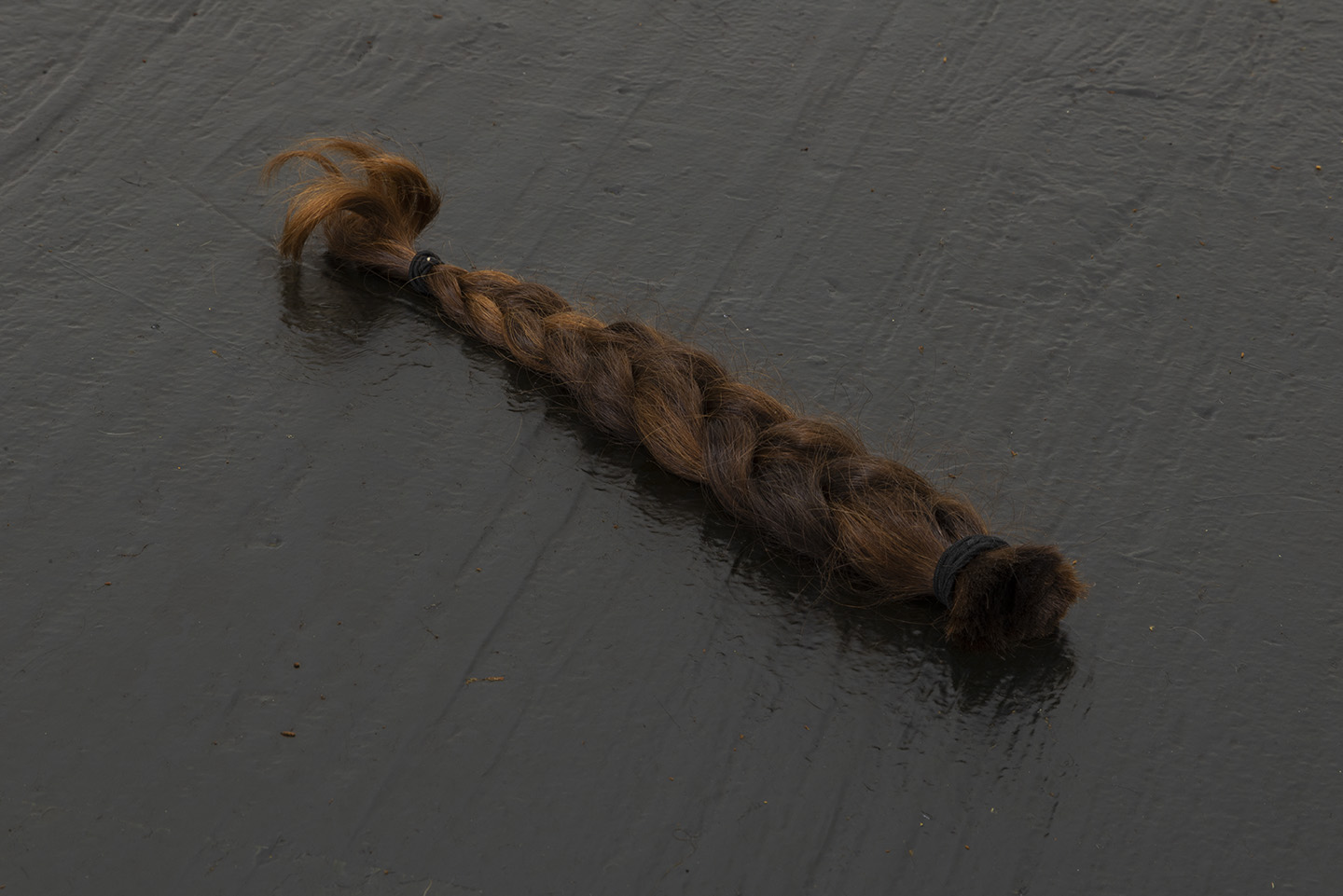 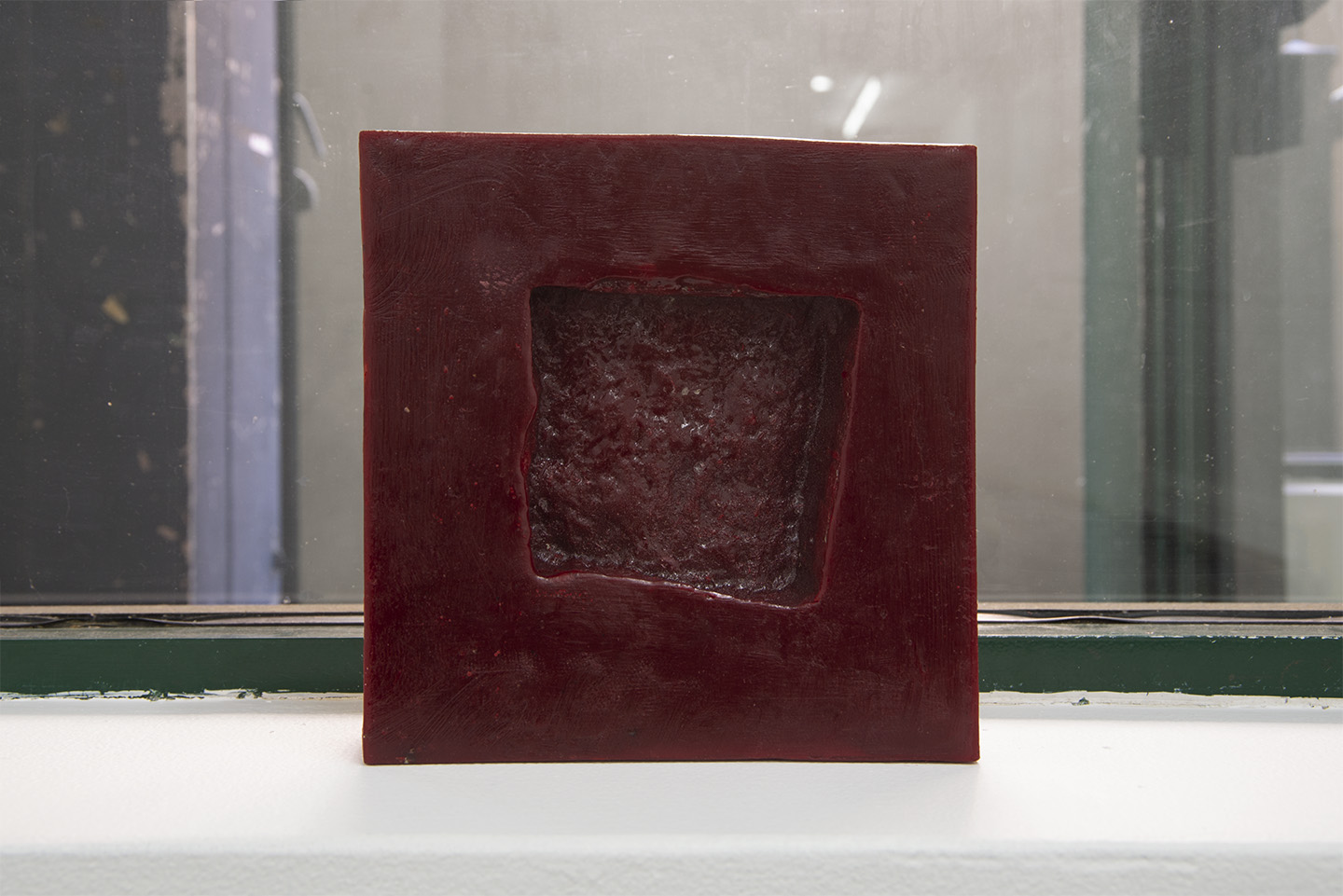 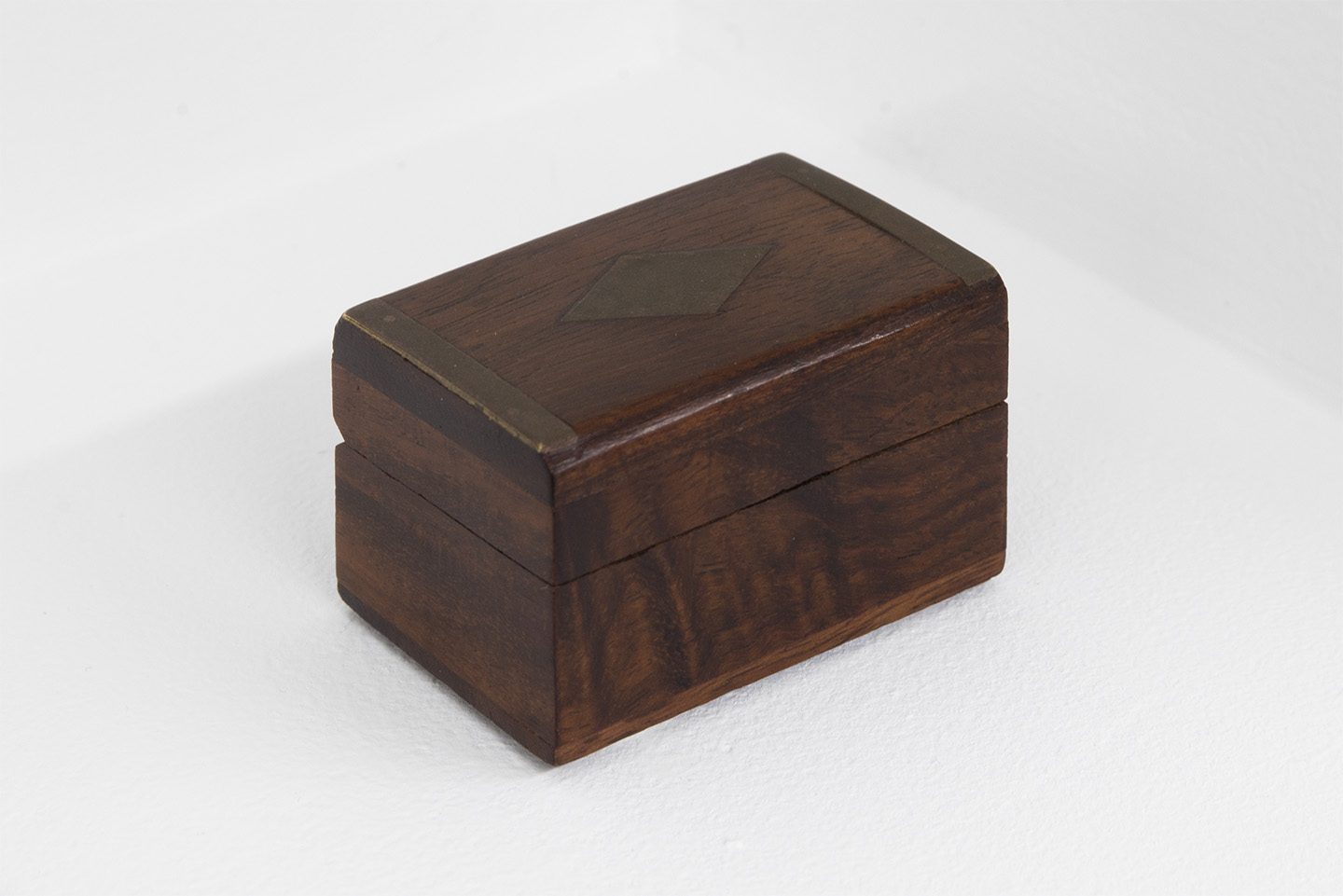 Lydia Ourahmane’s exhibition “low relief” at Bodega is comprised of a set of sculptures that suggest an emergence of the body and its narrative by way of concealment. The installation has a slightly forensic feel, yet its works point to figures and events that bear no evidence, remaining unnamed or perhaps unspeakable; the artist’s deft use of materials compounds traces of such backstories while preserving their opacity. In betadine (2019), the first work one encounters upon entering the gallery, Ourahmane mopped the titular antiseptic solution onto the floor. The brown disinfectant liquid appears as glossy streaks on the gallery’s black floor, leaving subtle stains where the mop has brushed the white walls. Four sculptures, bronze belly I-IV (2019), all cast in bronze from a 3-D scan of the artist’s torso, lay atop the disinfectant wash. An unseen piece of lead is sealed inside each belly, producing a chemical reaction that weathers their polished surfaces over time, toxifying them from within. Their arrangement abstracts their bodily reference, becoming a sculptural topography that leads to a braid of human hair, 1 decade of hair (2019), in the corner. In an unsettling performance, Ourahmane braided and cut off a long length of her hair before the exhibition’s opening. The braid is an ambivalent remnant of the violence and liberation of its severing, while the materiality of hair is an archive of a decade’s time, of its experiences both retained and released. Ourahmane’s two other works lay on peripheral ledges:low relief(2019) on the windowsill, mahogany box(2014–18) along the wall. The former is a square of blood-red wax imprinted by a stone from Mount Vesuvius. The latter is a wooden box. The absence impressed by the stone reverberates within the miniature box. With its lid closed, unlike Pandora’s, the box—and the exhibition as a whole—retains its secrets. What would it mean to uncover ourselves, Ourahmane seems to ask, without the impetus of disclosure? Her works allow a glimpse into such an opening — the body and its language arising from absence to astonishment. 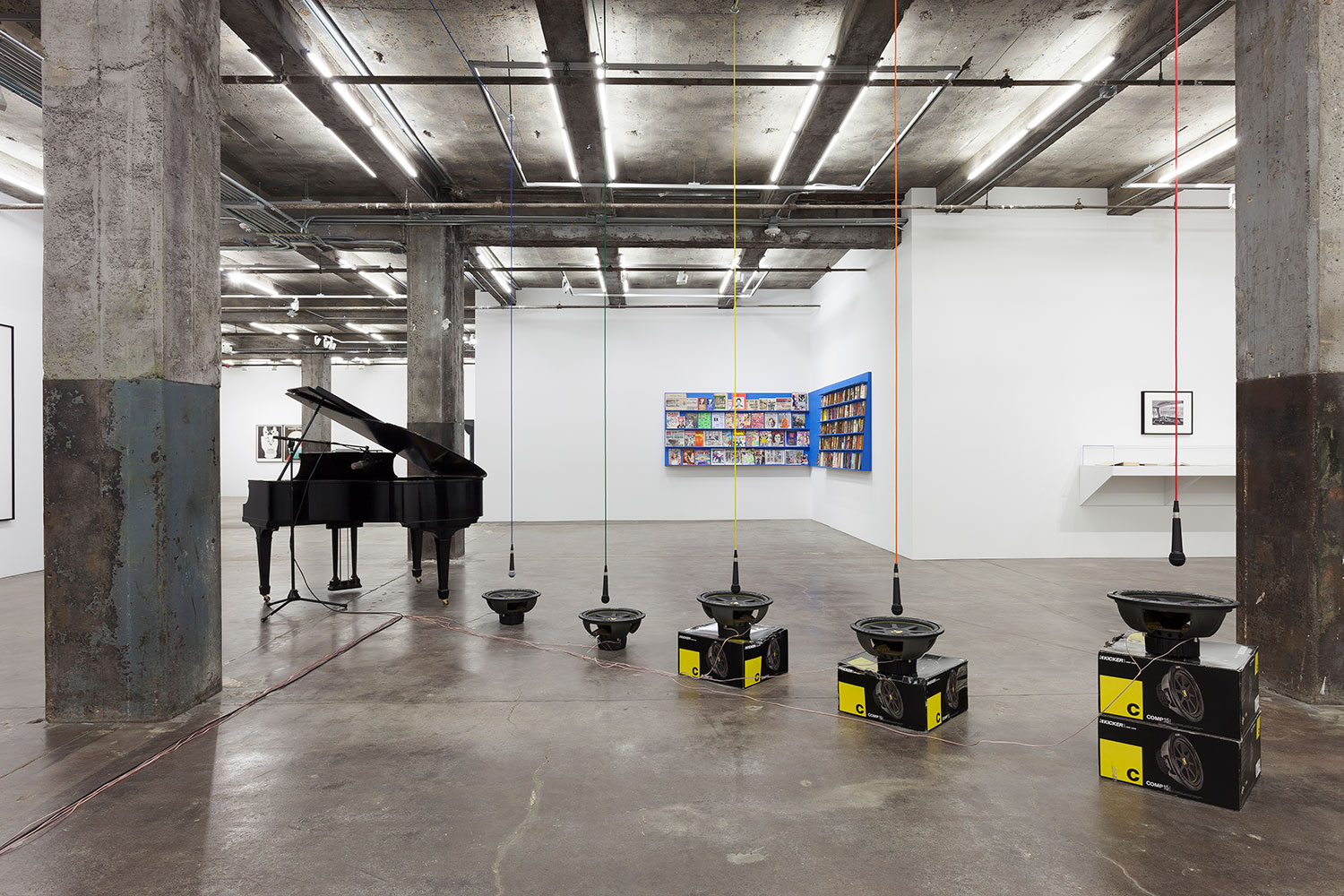