In Western folklore, monsters often undergo processes of bodily manipulation in which they are torn apart and stitched together into Frankensteinian forms. Estranged, dispossessed, misunderstood, and feared — they are eternally othered. In his latest body of work, Cole Lu reimagines myths of monstrosity into a speculative — and at times satirical — fiction that is based on her own personal narrative of illness and alienation.

Stephanie Kang: You preface “Animal Fancy” with a quote from Thomas Mann’s The Magic Mountain: “And life? Life itself? Was it perhaps only an infection, a sickening of matter? Was that which one might call the original procreation of matter only a disease, a growth produced by morbid stimulation of the immaterial?” How does this novel about the isolating journey of a man diagnosed with tuberculosis relate to the narratives you’ve created in “Animal Fancy” and “While Removing the Garbage or Paying the Cleaner”?

Cole Lu: I see the community in The Magic Mountain as a tiny model of society that reflects the very nature of human beings, particularly in the ways that they treat issues of illness and exile. And in this kind of enclosed microcosm, the environment can easily become toxic and isolating for outsiders, who are perceived as atypical and potentially dangerous. When reading Mann’s writing, I sensed some coding for queerness within the language of infectious materials, and the overlap between experiencing otherness as someone who is queer and was once disabled with an illness is eminently relatable. Essentially, how humans perceive otherness is so ubiquitous, so I wanted to express this using the visual language of a very familiar anthropological principle.

Yes, Mann’s portrayal of exclusionary communities is, of course, a familiar story for many. How then do the themes in The Magic Mountain relate to your own biography? Looking at the pieces you’ve included in the exhibitions, they all read as deeply personal. How are they infused with your own experiences?

The Magic Mountain particularly relates to my experience of being treated for tuberculosis. It’s an illness that you’re more likely to contract when you have a deficient immune system or an inflammation of the lungs; and because of the nature of its contraction, it sometimes overlaps with HIV patients. Since tuberculosis is such a stigmatized illness and I’m a queer person, I encountered some false assumptions about my status. When I was in the ER for over thirty-six hours with a fever, I was misdiagnosed with pneumonia, offered the incorrect medication, and forced to undergo an invasive bronchoscopy procedure. All of this medical mistreatment could have been easily prevented with a sputum culture, but because the doctors falsely believed that this illness was “less likely to be contracted by a young person,” I was dangerously misdiagnosed. Geographically, emotionally, and physically, I was isolated. I felt othered and stigmatized because of my physical health, sexual orientation, and immigration status all at once. It was like I was being reduced to a nonhuman (a thing or a label) — as a foreign, ill, gay person.

In The Magic Mountain, the protagonist’s three-week visit to a sanitarium is unexpectedly extended to seven years. His time there became like a steep, steady climb up a mountain that seemed to have no summit. The plot felt familiar to my situation as an immigrant, who was also experiencing an extreme illness. While my time undergoing treatment was unexpectedly extended, my visa status review period was simultaneously delayed. There was so much anxiety, agony, and pain in those processes of waiting in limbo. 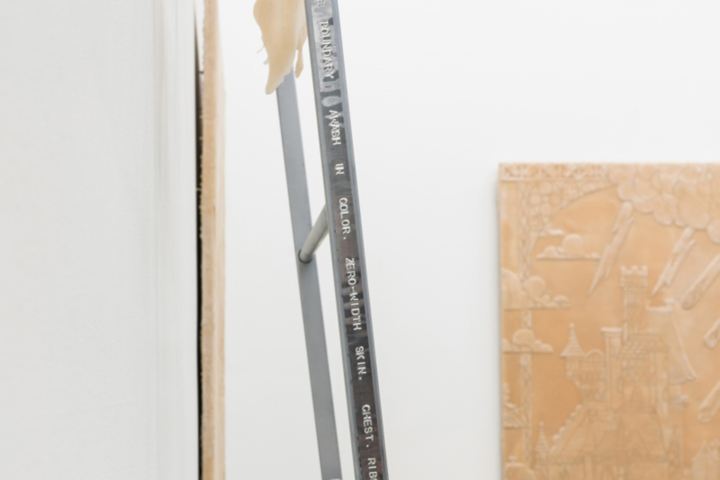 1
2
3
Cole Lu, the width of the boundary awash in color. zero-width skin. chest. ribs. diaphragm. spine. air on the other side. you, 2018 (detail), installation view at Monaco, St. Louis. Courtesy of the artist. 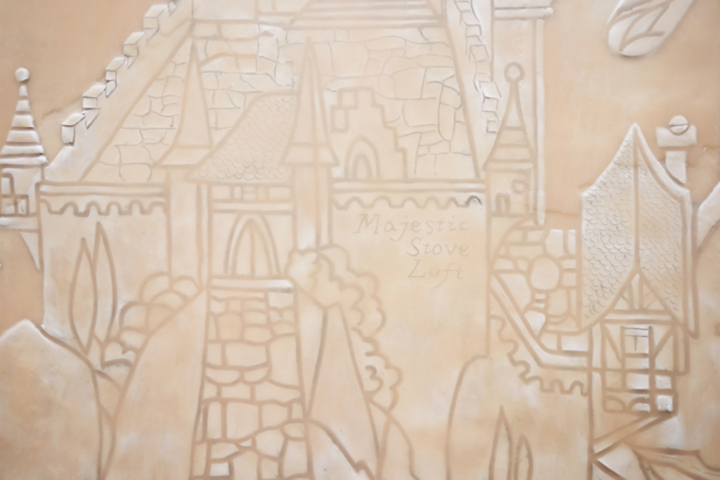 1
2
3
Cole Lu, You begin this way (a unit with two large windows, a concrete floor, no interior walls), 2018 (detail), installation view at Monaco, St. Louis. Courtesy of the artist. 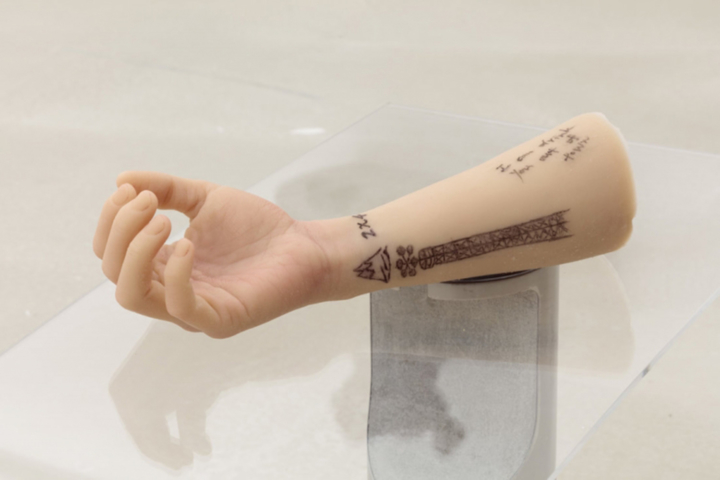 1
2
3
Cole Lu, So much of the river I do not know (I can drink you out of town), 2018, installation view at American Medium, New York. Courtesy of the artist.

These perceptions are threaded together in their shared experiences of otherness or, as you say, being seen as nonhuman. This then brings up the subject of monsters, which seems to be a central source material for you in this project. How do you see myths of monstrosity relating to The Magic Mountain’s themes of illness and isolation?

As I mentioned, tuberculosis is a highly stigmatized illness — a sentiment that is often placed on both the queer community and immigrants. When you’re from a certain country (that is not predominantly occupied by Anglo-Saxons) you’re perceived as an alien, someone who carries foreign bacteria. And when the body is constitutively bound to a disease, it is separated into parts, and you’re not seen as a whole human. As Mann writes in The Magic Mountain, “Illness makes people even more physical, turns them into only a body, […] just as disease in an organism was the intoxicating enhancement and crude accentuation of its own corporeality.” Going through such an antagonizing process of being treated like a nonhuman (i.e. through language in medical or daily usage, general stereotyped responses, and behavioral reactions) made me feel ostracized, dehumanized, and monstered. It felt like I was stamped with a label of danger, like I was a monster that needed to be caged so that I wouldn’t spread my disease.

This follows a long tradition of discriminatory viewpoints from this villainizing perspective that decides what is considered a transmittable disease and who is perceived as highly contagious (dangerous).

I believe that mythology is a gateway for introducing these thoughts to an unauthenticated narrative, and I’m particularly interested in how it tends to portray monsters as othered and animalized. And that is where the title of the exhibition comes from: animal fancy, a hobby involving the appreciation, promotion, or breeding of pets and domestic animals. This desire to categorize animals and monsters is very similar to Western accounts of race, gender, and colonialism.

While you speak generally about Western perspectives and their relation to monsters, you point specifically to the iconic tale Beauty and the Beast by inserting visual signifiers and vignettes from the Disney film into your sculptures and reliefs. What is the significance of this particular source for you?

While making this work, I was very aware of my place within Western culture. Personally, I see it as something that I was exposed to unwillingly as a child. So I wanted to use source material from Western culture for this series, and address this experience of being an outsider using the language and collective memory of a certain kind of folklore with a common understanding.

Like many other Disney movies from my childhood, Beauty and the Beast has an embedded problem of othering whoever is not considered white, straight, able, and healthy. So anyone who doesn’t fall into those categories is either a monster, a home appliance (unwillingly), someone with a major personality flaw, or a source of comic relief. I think that makes this film a suitable platform to talk about intersections of diversity.

But while the movie does have its problems, it simultaneously functions as a source of comfort for me. In the story, the protagonist is an independent thinker who doesn’t abide by heteronormative social values, and she falls in love with someone who is not human. They come to recognize each other as mutual outsiders from society. I particularly related to the Beast’s experience of isolation during my time in quarantine. While I was receiving chemo medicine, the most basic actions, like breathing or moving, became difficult. It was like my body wasn’t whole anymore. Thankfully I was still able to read (after five hours of brain-mush from my medication every day), and that allowed me to take my mind to other places. In difficult times, you seek comfort and perhaps cope with magical thinking, so reading and fantasy became my personal antidotes.

There are clear distinctions in process and output in “Animal Fancy” and “While Removing the Garbage or Paying the Cleaner” to your previous works. Would you consider it to be a departure, an extension, or an evolution from your previous work?

I see them as a bridge between my old and new works, particularly in their utilization of readymades. And while many of these pieces are about the stimulation of time and tactility, I’m still trying to maintain the same conceptual rigor. I think it’s all about that balance for me now. When I’m putting together a readymade object, I think it through thoroughly and look at every object I have. Then as I begin compiling its form, the idea is composed and finalized in the process. It’s like going through this journey in my head that no one else knows about. But with the more tactile strategy, the idea that I want to execute is already fully formed. They both act as alternative forms of therapeutic release for me.

Cole Lu (b. Taipei) is an artist, curator, and writer based in New York.

Stephanie Kang is an artist, writer, and historian currently pursuing a PhD in art history from Ohio State University.