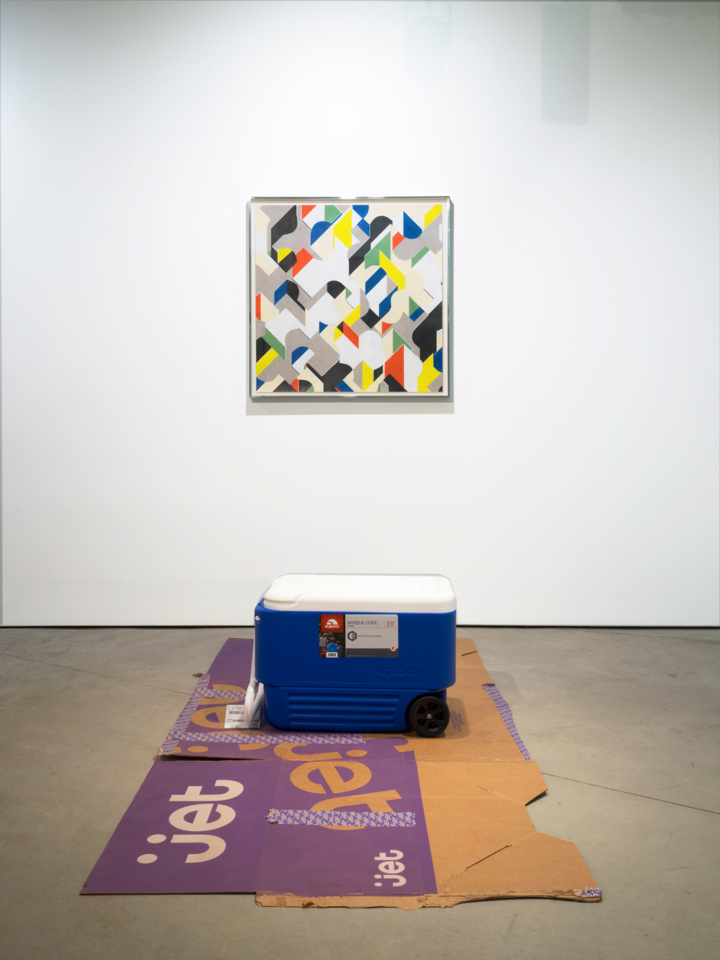 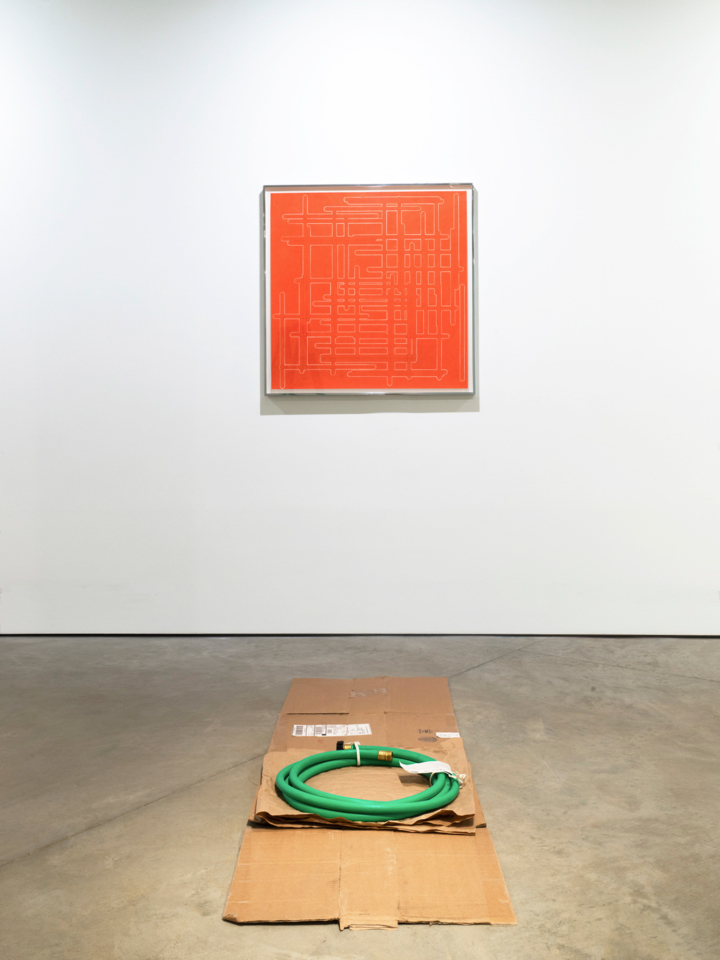 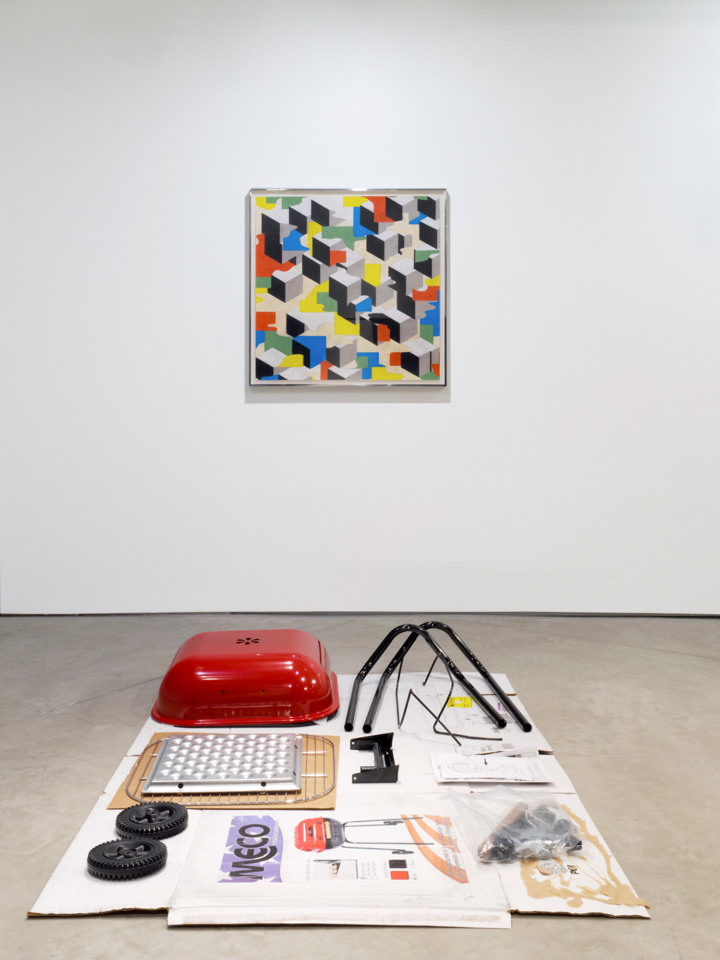 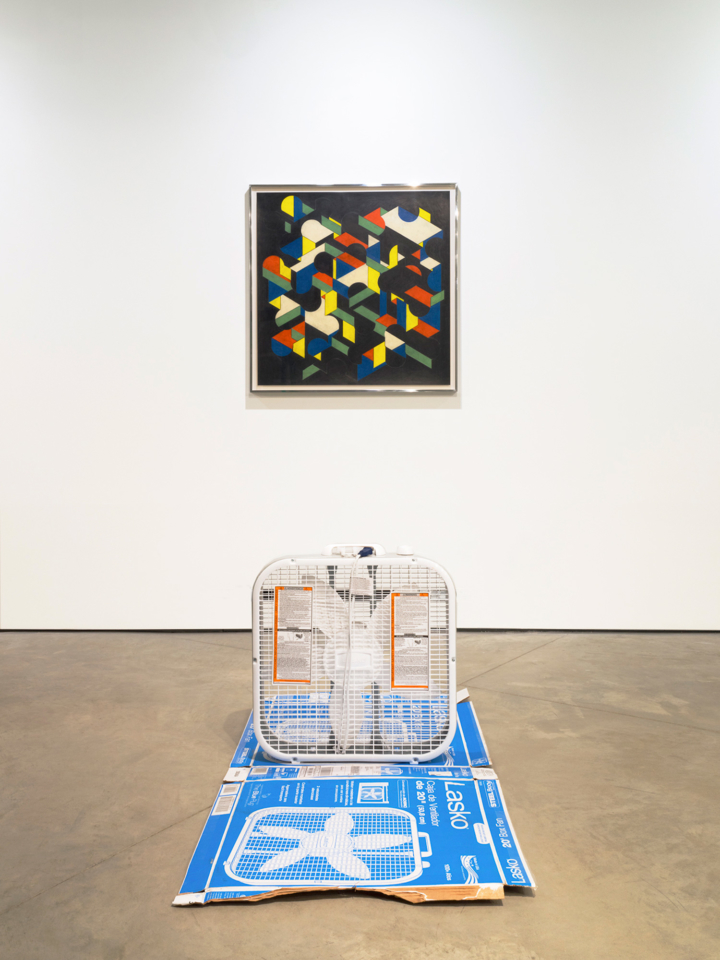 For his recent solo exhibition at Reyes Projects in Detroit, New York–based artist Miles Huston has created seven virtuosic drawings that seem to atomize their subjects, encoding color and proportion into visual algorithms, ecstatic open compositions of planar and axonometric polychromy. In front of each drawing sits the generic object that inspired it — all common products that according to the artist represent the irreducible building blocks of contemporary civilization.

Irrigation, supply chain distribution, food preparation, waste management, air conditioning, refrigeration, and construction are represented by ubiquitous items easily purchased on the internet, such as a green garden hose, a black rubber tire, a red charcoal grill, a yellow rubbish bin, a white box fan, a blue workman’s cooler, and gray rolls of duct tape. Each item imparts a color hierarchy to its respective wall work that would be otherwise imperceptible without the sculptural subject’s presence. Contributing to the multiple layers of signification embedded in “The Style: Dweller on the Threshold” is the artist’s intentional deployment of the primary-color palette popularized by Theo van Doesburg, Piet Mondrian, and Gerrit Rietveld. Huston seemingly recontextualizes the De Stijl school as a lens through which to understand not only the surface of the city, but the increasingly automated and artificial infrastructures that bring global machinations to bear on daily life.

As one of the co-founders of the Brooklyn-based artist-run exhibition space Know More Games (2011–15), Huston has been an important presence in New York’s emerging art scene. Through his involvement with the project space and as an independent curator, Huston has supported an increasingly visible community of emerging artists, helping to give early exposure to ascendant peers such as Jamian Juliano-Villani, Win McCarthy, Michael E. Smith, Avery Singer, and others. Not unlike organizing artwork in a gallery, Huston uses a refined curatorial sensibility to transpose the subjects of his current exhibition onto the picture planes of his “Verse” drawings.

Looking at Huston’s work can be a meditational experience during which one becomes aware of a profound pictorial and spatial intelligence in the adjacencies of color and form, as well as the use of positive and negative space. Executed with exceptional dexterity, for example, is Huston’s Verse, Red Grill (2018), an architectural composition whose structure seems to stutter, causing what at first appears to be discrete elements of solid, void, figure, and ground to become unexpectedly interrelated. Huston’s visual poetry reflects an increasingly contemporary condition of inextricable urbanistic and digital interconnectivity. Looking at the disassembled red grill on the floor in front of the drawing is like looking upon a crumpled outfit, the occupant of which has been dissolved into its quantum constituents that now hover before you on the wall, unrecognizable yet somehow familiar. 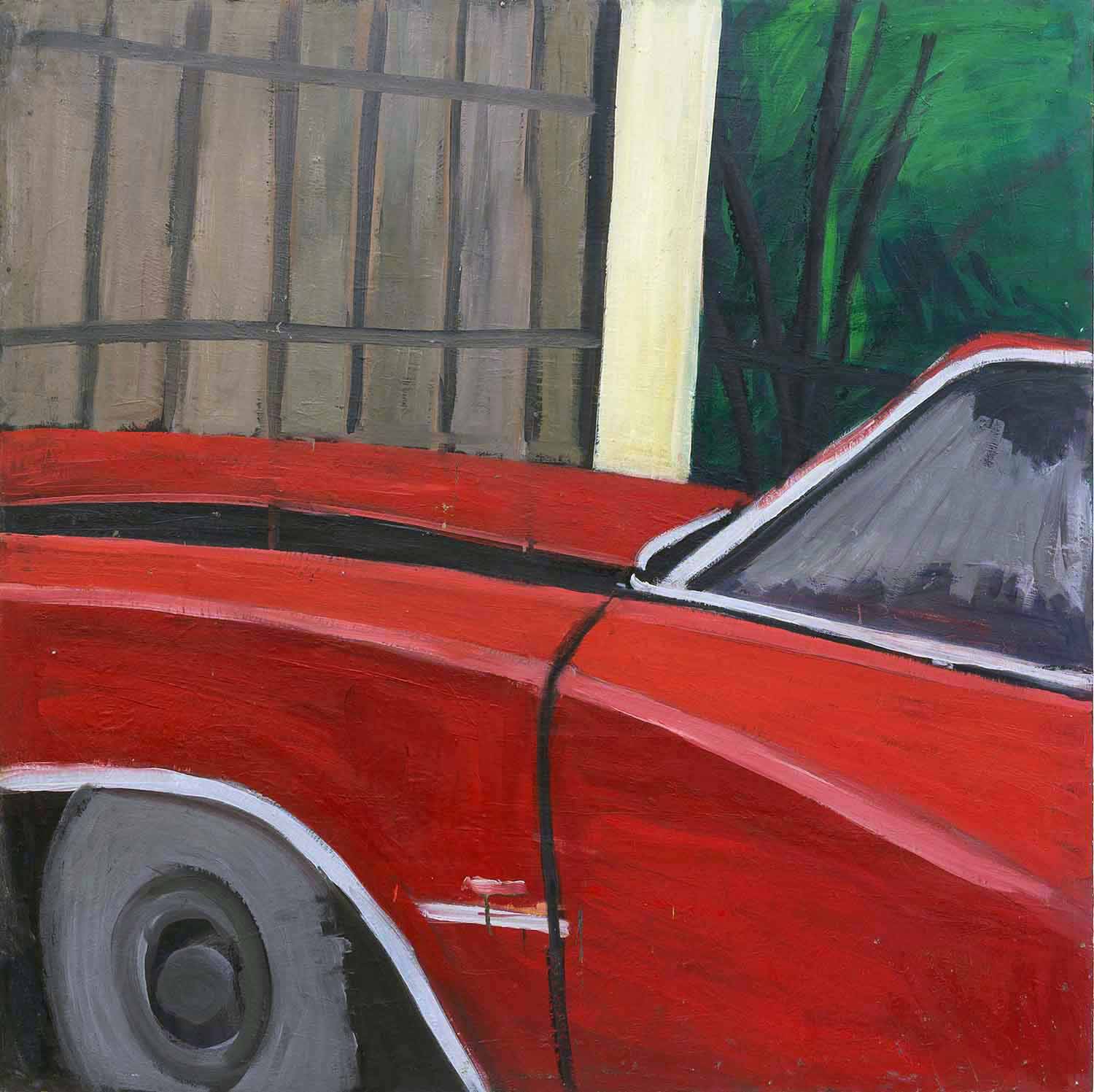 Empty lots, busy restaurants, silent houses and crowded garages: each a part of the landscape of southwest Detroit, and each…