Last year Art Athina, the more-than-forty-year-old fair of the Hellenic Art Dealers Association, got a last-minute overhaul: two months before the opening, in the midst of an institutional crisis and with the pitter-patter of global art feet crisscrossing Athens in search of Documenta sites, a new director was brought in and tasked with making the fair a bit more cosmopolitan. If the import from Kassel got a generally mixed reception, the city of Athens managed to seduce art-world pilgrims as a chaotic bohemia where rent is cheap and things are happening. The second iteration of Art Athina under its new leadership opened on June 18; now part of a week of openings and events in and around the city, the fair appeared poised to capitalize on the allure of Athens as the latest New Berlin.

The previous Sunday, the always-delightful Rodeo Gallery of London (formerly of Istanbul) inaugurated an outpost down by the port of Piraeus in a renovated warehouse — old pale stone walls, new pale wood floors — with an exhibition of paintings by Leidy Churchman. That afternoon visitors and locals alike had been bussed out to the leafy suburb of Filothei, to the home — or a home — of construction magnate and collector Dakis Joannou. They shuffled through a warren of windowless rooms containing highlights from his collection, acknowledged the many works by Roberto Cuoghi, and emerged upstairs to cruise the spread of kabob and salads and flag down trays of white wine. In the evening shows were opening: Chris Dorland at the project space Aetopoulos; Malvina Panagiotidi at Despoina Damaskou’s space You Cannot Hide for More than Seven Years. The parties went late — as parties do — and then the whole thing spilled out into the Saronic Gulf and slithered up again onto the shores of the island of Hydra.

There, Dakis’s Deste Foundation was throwing its annual early summer party, for which an artist makes use of the former slaughterhouse perched up on the cliffs outside of town. This year it was David Shrigley, who showed a video of bleating goats. That night the food was vegetarian — a delicious faux souvlaki served in a pita — appropriate given the affection Shrigley clearly has for goats, though I suspect a Peter Singer–reading animal-liberation ethicist would still have found the whole thing barbaric. A trio in all black and sunglasses with vintage Rickenbacker guitars took to the roof of the slaughterhouse and banged out some vaguely Spacemen 3-ish droning rock ‘n’ roll repetitions in front a projection of the goat video. The playing would come to an abrupt stop, a goat would bleat, and then the band would jump back in. Again the festivities went on into the early morning. Some people went for a cold swim; most drank at the Pirate Bar.

Back in Athens, Art Athina was taking place in a new venue, perhaps the biggest change from the previous year: it had moved from a stadium in Piraeus to the Athens Conservatoire, a long, low, concrete structure from the 1970s designed by the Bauhaus-trained Jan Despo. The building, which had remained unfinished for more than forty years after funding ran out — and which is itself the only completed piece of a cultural complex planned in late 1950s — is elegant and linear from outside, set back from the street and raised up on pillars. Inside, the lower level — where the fair was set up — unfolds in a meandering labyrinth of windowless rooms. The give-and-take between the International Style and local realities and particularities embodied in Despo’s building is, in some sense, updated in Art Athina itself: however much the organizers have worked to transform the fair into a node of globality, it remains, at the same time, rooted in localisms. Indeed, for those of us who are not buyers or sellers of art, who in fact have no stake at all in whether any art gets bought or sold, the simple premise of the art fair — out-of-town collectors buying art from local dealers, and local collectors from out-of-town dealers — works best when the traversal of commercial and stylistic distances produces some interesting vertigo.

It was a fair of two halves: one section contained the booths of the old-school — not to say provincial — Greek galleries, the other the mostly young spaces from Europe and the United States as well as those Greek galleries more at home among the international set. You had to go upstairs, outside, and cross a little plaza to get from the former to the latter. There were highlights on both sides, though I found it all worked best if you just wandered back and forth between the two, ascending and descending stairways, letting strange harmonies and discordances wash over you: Alexandros Psychoulis at a.antonopoulou.art, Hamish Pearch at London’s Soft Opening, Chryssa at Mihalarias Art, Mario Ayala at Sade out of LA.

Syndicate put together a thoughtful booth with Chrysanthi Koumianaki’s playful invention of a new language in a wall of colorful vinyl scribbles and powder-coated steel punctuations, set to the tune of a sound piece by Steffani Jemison based on a rediscovered utopian language. Andreas Angelidakis had a superb installation of his foam ruins, presented by the Breeder in a room shared with a new Athens space, Hot Wheels Projects, which, for its part, offered up work by Valinia Svoronou, sculpture and drawings spun off from her sci-fi graphic novel High Tide Planetary Pull. A curated section, helmed by Artemis Baltoyanni under the title “Pseudomorphs,” included works by Nik Greene showing with Bonny Poon from Paris: a loose typology of Greek magazines — overlapping, thematically arranged, and arrayed on the floor — with motion-activated cameras snapping pics of the shoes of those curious enough to stop and look. Rodeo installed kinetic sculptures by Liliane Lijn in a small, inaccessible courtyard. Viewable through the windows, they were four slowly turning white cones — she calls them “koans” — made in fiberglass and resin and ringed with thin fluorescent tubing.

It was getting steadily hotter as the crowds continued descending into the opening. I went off in search of the VIP bar. It was in a small room down a hallway and remarkably difficult to find; even when you’d found it, it was no easier to relocate the next time. After a few circles and dead ends I managed to locate it, only to be informed by a guard that the room had been commandeered by the president of the Hellenic Republic. I guess Prokopios Pavlopoulos likes to drink alone. 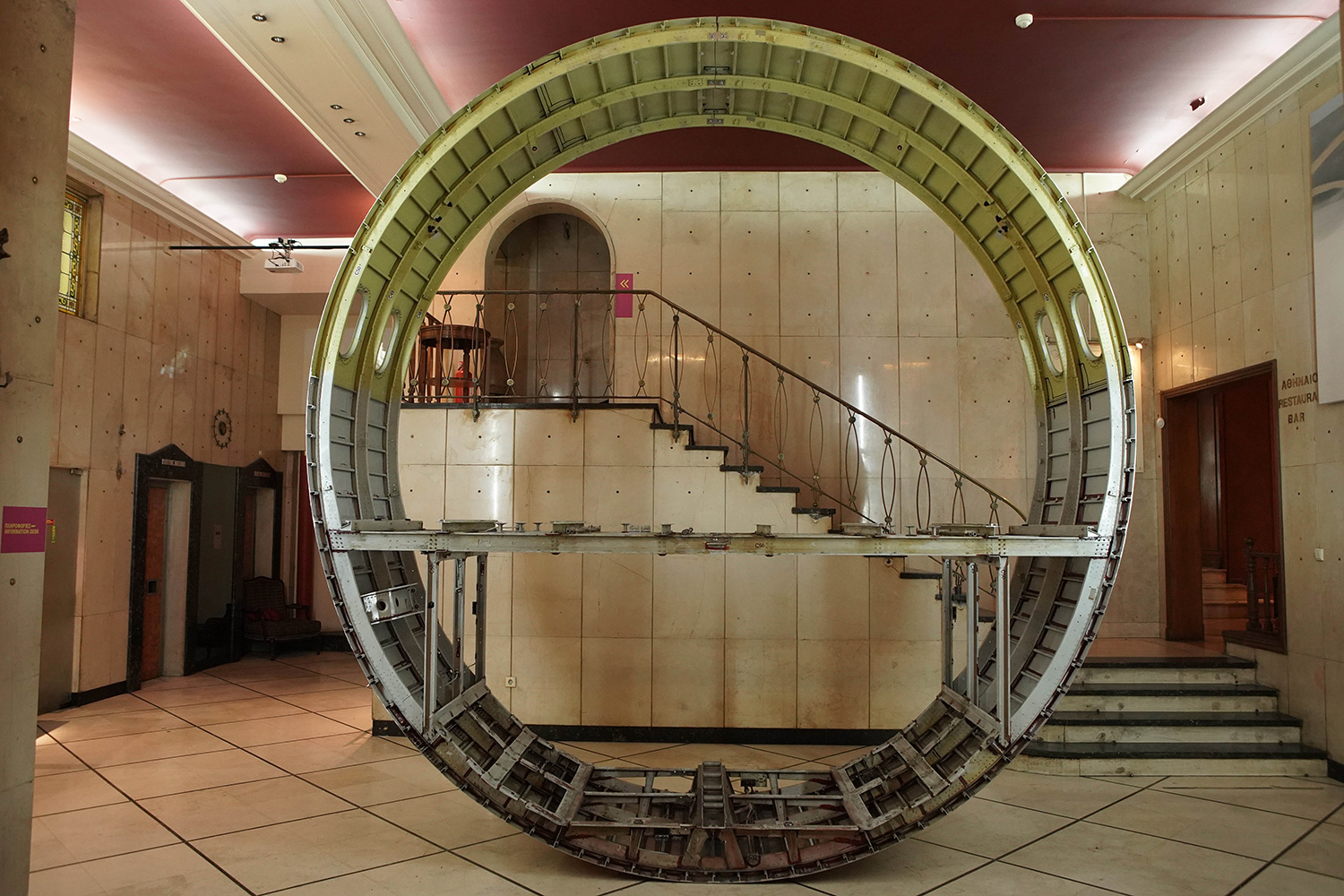 A naked yellow body, head wrapped in bright orange fabric, clasping an enormous bamboo crucifix, spills out of the former…