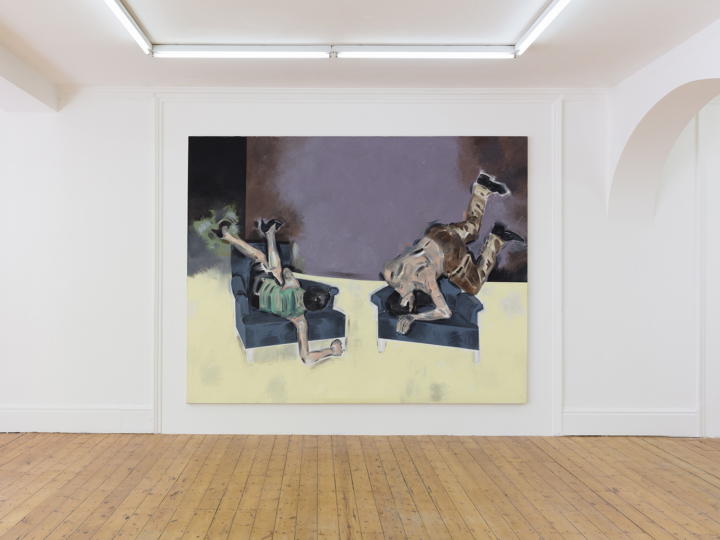 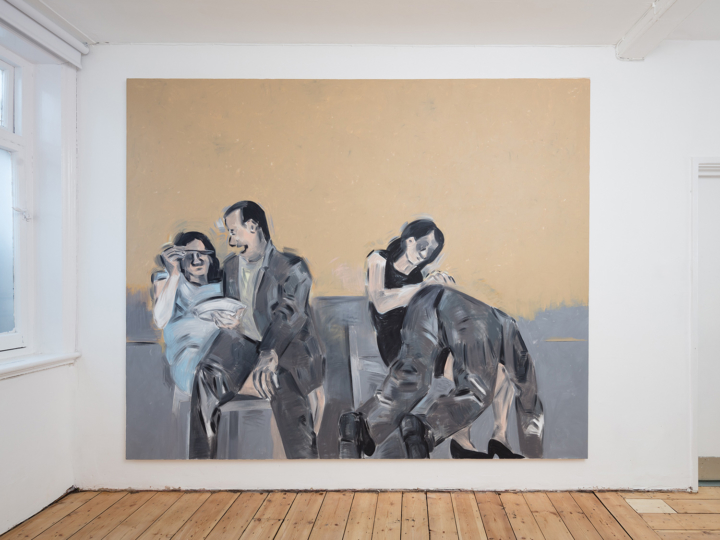 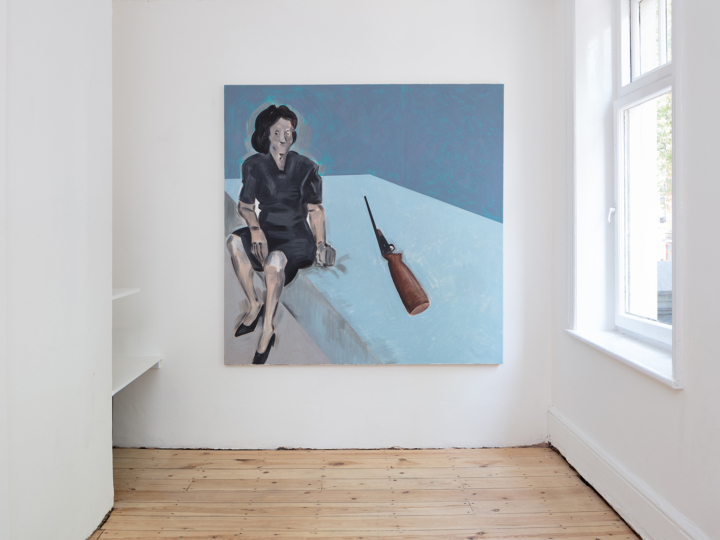 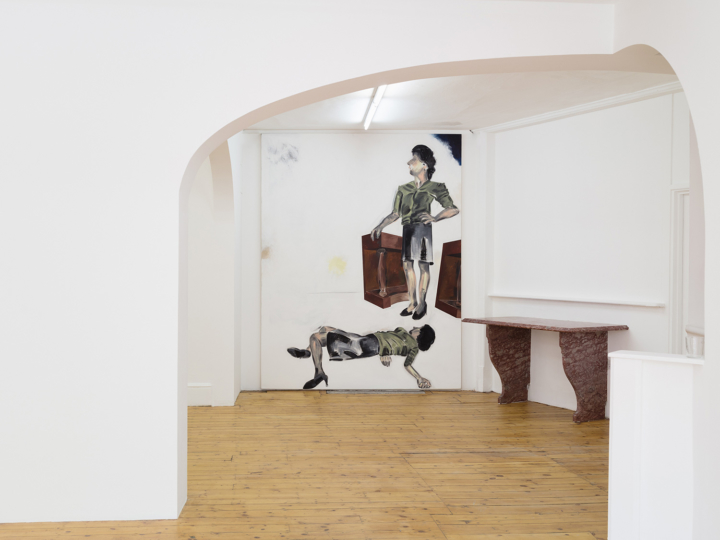 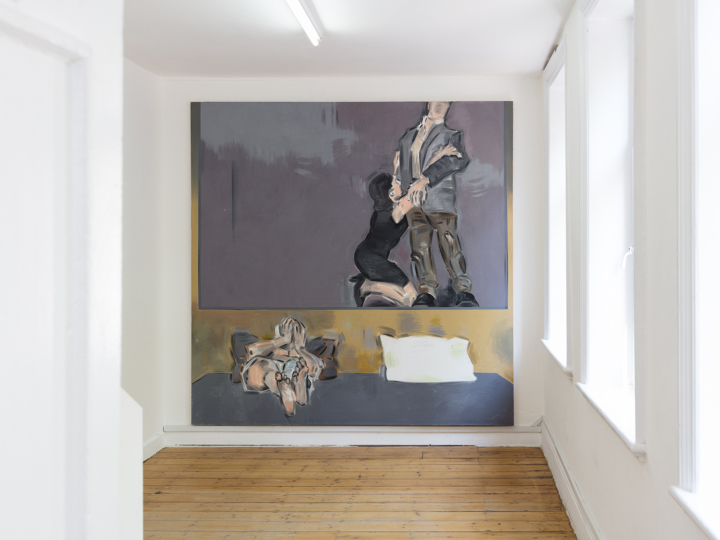 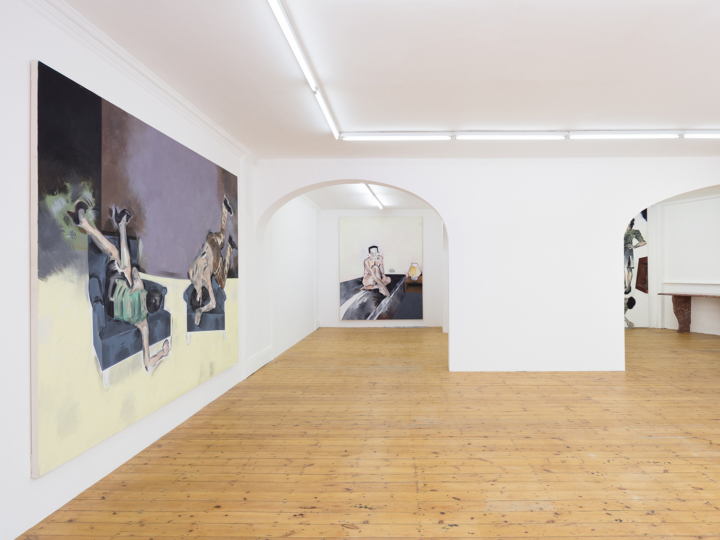 1
2
3
4
5
6
Installation view, Apostolos Georgiou, From My Heart, Rodeo, London, 2018. Courtesy of the artist and Rodeo, London. Photography by Plastiques.

Little is known of writer Peter Zabelskis. In 1986, Slate Press published his Loop: 50 Ideas for Pictures. These loops are peephole preliminaries for an absent narrative center: each remains phlegmatic as Zabelskis gestures toward tension, perfunctory absurdity, or cliché tragedy. For instance: “A shabby motel whose owner, whenever a murder or suicide occurs in one of the cabins, cuts a back door into the room as soon as the police investigation is over.” In another, the marbelized cover of a composition book reveals words that swirl into prose but don’t linger “long enough to be read.” The cover is only ever a primer, Zabelskis confirms: “Inside is something completely different. Let’s look…”

Of course, we never see. But Apostolos Georgiou’s paintings suitably deliver on Zabelskis’s cue. They are interiors to the author’s deftly executed keyholes: settings without introduction, living rooms without a welcoming entrance. In his scenes, lachrymose minds stoop as narrative skulks, either bruised by outburst or wallowing in its aftermath like a ripe contusion. Action appears habitual and despairing, at times absurd, radiating coolly from tepid mobilizers: fists, rifles, unoccupied pillows, hunched postures. The powdery palette of plum, taupe, brown, and mint green is uniformly suave, like a funereal fistful of black calla lilies.

I think: you look like you killed a man. In Untitled (2000) he sits, knee to chest, atop a charcoal mattress beside a lamp glowing with emotion. His face: when anxiety and dread reduce to stoicism. The brushwork is graphic and blocky. His shoulder catches a nectarine-hued highlight. Isolated, he looks like a man containing aftershock, swallowing the tectonic consequences, moving on. The patina of the wall is layered with sequences from pale pink and lilac to a spectral buttercup yellow. Embalmed, the colors illuminate the wall — the most lavish feature of the room.

Spaces are mostly vacant, lending Georgiou’s figures a theatrical aplomb that seems to relish distraction in moments of rickety slapstick. Two people teeter on Mücke Melder-esque chairs, their ankles shaking. The rhythm feels percussive and brassy, reminiscent of Cathy Berberian’s zany onomatopoeia in Stripsody (1966). These rooms are a woozy mind where behavior is torpid yet barbed by emotional gravitas: a woman spoon-feeds a man on her lap; another soothes a man as he crawls over her like a sartorial schlub. He could be writhing in agony. These are places of proclamation, explosion, and seclusion; places between papers, beds, desks, chairs; between servility, solidarity, and dominion. Domestic or institutional, the environment blends salon, asylum, and sanctuary: where the psyche may obsess or decay. So often it seems these people wrestle their inner saboteur or reckon with past humiliations: a woman stands at a wooden lectern, a leader, whose own corpse lies in front of her.

Stilted by melodrama, Georgiou’s evocation of gallantry soon buckles, with glowering sadism slinking at its edges. Icons become specious lumber, thickset with hoodwinking tricks. Color is a low-pressure headache, its sultry quality numbing and imprisoning as though these actants sit between the emotional impasse of inevitability and the anticipation of looming change, between serenity and melancholy, total defeat and deliverance. The legibility of sincerity or revenge is never realized; rather, for Georgiou, they feel like two masks for one plucky harlequin.

This brings into question the title, “From My Heart.” A tired idiom, to mention “my heart” is to sow a challenge in its very words; the loaded symbol petrifies into a heavy-handed burden. One can weaponize my heart, bewitch it as a tool for manipulation. It is hard to accept the heart at face value, and Georgiou gives us an escape clause from this core ambivalence, carving out the back door.

Jala Wahid doesn’t mess around. Entering this basement gallery-cum-meat storage facility one is met by the jagged profile of a…