On Saturday afternoon, two figures in ceil-blue medical scrubs got down on all fours and proceeded to make random ink marks on the High Line park’s elevated footpath, only to quickly wash them away.

The activity took place on the occasion of the final day of Hauser & Wirth’s most recent exhibition uptown, “ALLAN KAPROW. PAINTINGS NEW YORK.” The show surveyed works spanning the breadth of Kaprow’s materially archival output, aiming to trace an evolution of his ideas as they migrated toward a threshold of particular interest to him: the ever-elusive boundary between “art” and “life” that he sought to blur, dissolve, and eliminate altogether.

With the gallery’s East 69th Street location already bearing historical significance in connection to Kaprow’s legacy (his seminal environment piece Yard was shown in its first manifestation there in 1961), the recently presented work in drawing and painting offered plenty of nuanced clues indicating where or in what direction his progressively deconstructive line of critical inquiry would lead him.

In a 1958 essay titled “The Legacy of Jackson Pollock,” Kaprow ruminates on the nature and degree of Pollock’s art-historical impact just two years after his death, describing a certain enlargement of space between artist and working substrate due to Pollock’s approach to gesture, the body, and performance in relation to painting. This viscerally solidified the ground beneath Kaprow’s feet and suggested an infinite expanse of quotidian possibilities to explore. In one line of this text in particular, he introduces the concept of a Happening, which he would come to explore in much greater depth over the course of his life: “Not only will these bold creators show us, as if for the first time, the world we have always had about us but ignored, but they will disclose entirely unheard-of happenings and events, found in garbage cans, police files, hotel lobbies; seen in store windows and on the streets; and sensed in dreams and horrible accidents.”

In essence, the eulogistic text on Pollock conveys a sense of how his painting practice eventually transcended the limitations it had come to him imbued with, calling for a total collapse in distinction between the arenas of “art” and “life” that Kaprow had so deeply considered. 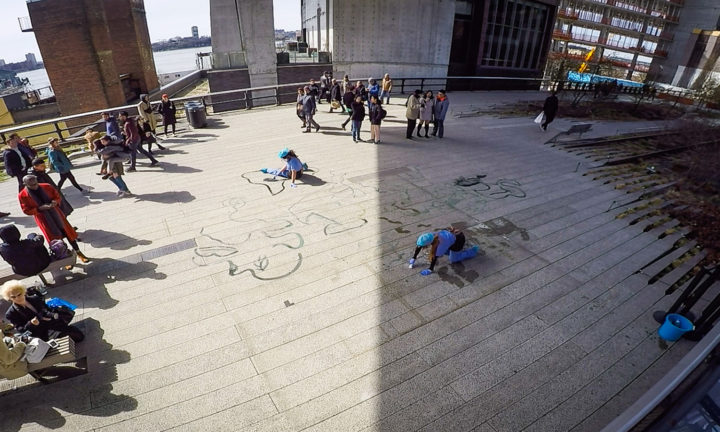 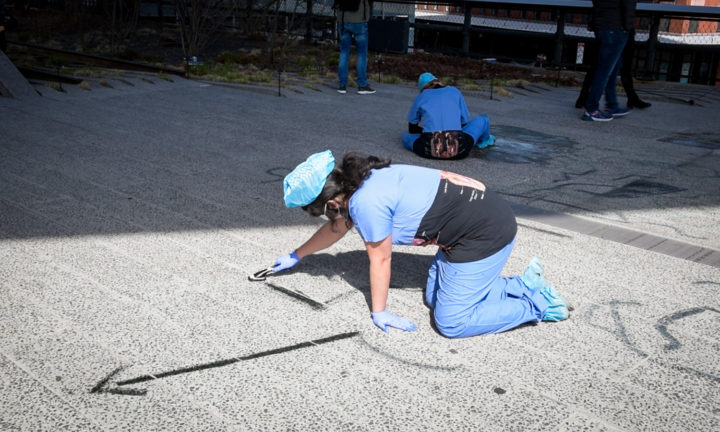 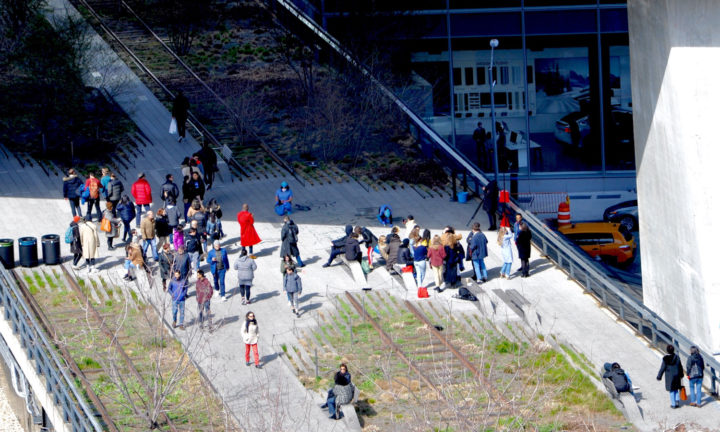 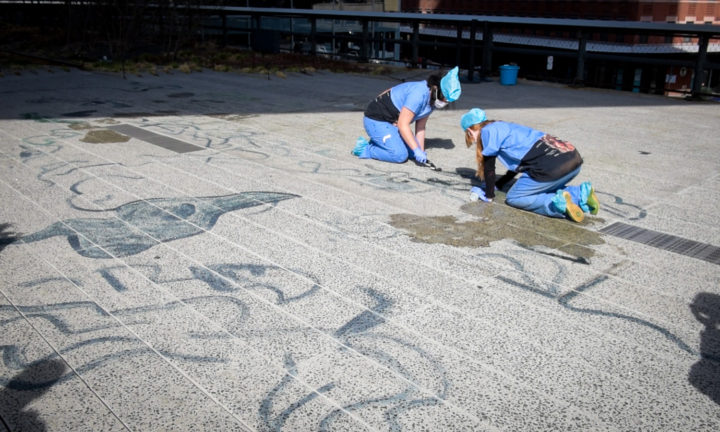 “Not satisfied with the suggestion through paint of our other senses, we shall utilize the specific substances of sight, sound, movements, people, odors, touch. Objects of every sort are materials for the new art: paint, chairs, food, electric and neon lights, smoke, water, old socks, a dog, movies, a thousand other things that will be discovered by the present generation of artists.”

It is at this atomizing brink that the practice of artist Puppies Puppies may be situated, somewhat similarly pursuing a profound confusion of “art” and “life” as diametrically opposed terms.

On the High Line this weekend, behind the surgical masks were artists India Menuez and Ser Serpas, who in collaboration with Puppies Puppies realized this “Reinvention of an Activity by Kaprow,” which called for “one person to draw a line on the street with chalk, while a second person followed it and erased it with a rubber eraser.”

To fulfill this realization, both Menuez and Serpas came uniformed and well equipped, in not only scrubs but with latex gloves, booties, and sponges with special handles fashioned to deliver a steady flow of either ink or solvent for its user, as well as other small necessities for maintaining optimum cleanliness.

Both of their tops cropped, the pair of costumes designed by Puppies Puppies comedically feigned exposure of the wearer’s midriff by extending a layer of black fabric downward, which featured screen-printed illustrations of organs accurately placed and diagrammatically labeled on either side. Dressed the part, they had split up and assigned to one another the tasks of making marks (Serpas) and of scrubbing them away (Menuez) as per the parameters of the Activity’s score. Lasting around forty minutes, the Reinvention was something of a heartfelt exercise in futility and negation.

That Menuez and Serpa played the specific role of hygiene/custodial workers in this scenario undoubtedly ties into Puppies Puppies’s intricate, quietly drawn out mythology as told by the artist over the past few years — an aspect of this being the experience of surviving a life-threatening brain tumor. While the fragmented story has been presented in the public sphere under the guise of performance, there is always a direct correlation to the extremely intimate interior life that drives the work.

Similar to the recurring use of horseshoe crabs throughout Puppies Puppies’ work — having been fascinated by the creature’s baby-blue blood and ultimately the “supernatural” ability to detect even the slightest presence of bacteria via the Limulus amebocyte lysate, or LAL, test commonly used in the medical field — it is likely that part of the inspiration behind Saturday’s Reinvention can be sourced from the substantial amount of time the artist has spent in hospitals.

As the artist statement provided by Hauser & Wirth, who commissioned the piece, concludes, “We are all vulnerable to becoming or making the mess that needs to be cleaned up, falling into disorganization, and needing to be re-organized, broken, and then fixed.”

New York-based independent curator and writer Cecilia Alemani has been appointed the Donald R. Mullen, Jr. curator and director of…