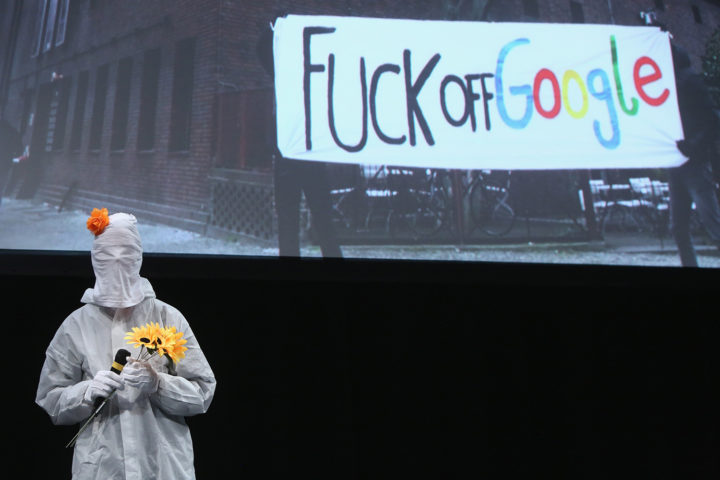 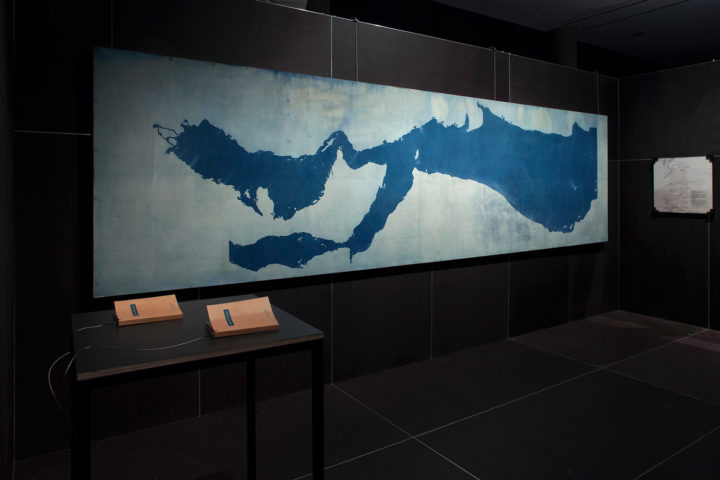 Long ago, literary and art critics observed a parallel between artistic representation and the monetary system. If naturalism conformed to the actual worth of the gold standard, the emergence of modernism would be accompanied by the adaptation of “token” signs, arbitrary in their nature. But what happens to our symbolic economies when they become governed by immaterial transactions instead of banknotes?

Under the title “face value,” the thirty-first edition of the Transmediale festival carries on this analogical reasoning through a series of talks, exhibitions, and a moving-image program. The overall project portrays the current state of global affairs as grim and lamentable: everything that used to have value has become steamrolled, disembodied, and hollowed out.

This “flat ontology” of the present is heightened in the film and video program curated by Florian Wüst, in which the central theme — “face value” — is treated as literally as possible. Instead of plunging into perceptual illusions of three-dimensional space, the spectator is constantly confronted with the materiality of the projected images: full-frame surfaces of overprints, analog photos, or paper money overlapped with the surface of the screen. This guiding motif of the exterior continues through the allegory of water in Inga Seidler’s exhibition “Territories of Complicity,” in which free ports, these paradoxical “non-sites” of financial capitalism, are used as reference points in the display of small, boxed-in artist installations, as if ready for maritime transportation.

Bodies of water have never been neutral territory, but they play a major role in the construction of the “racial capitalocene” (the world ecology that is historically based on slavery and colonialism), as was stressed in Françoise Vergès’s keynote speech. Collaborative studio CAMP’s reflective display, Country of the Sea (2009–15), gives this same maritime imperialism a special visual representation with their “view from the boat,” while Femke Herregraven’s interactive digital installation Sprawling Swamps (2016–2018) addresses the politicization of the seas through fictional infrastructures, which viewers can precariously navigate via interface on swamp surfaces, waves, ice sheets, and shifting shorelines.

Lisa Rave’s essayistic documentary Europium (2014) also departs from the surface and sinks down to the seabed, where the chemical element Europium is extracted. Given its use in the production of computer monitors, one might think that reduction of reality into two-dimensional images would in fact become dependent on a deeper penetration of the Earth’s crust. This may lead to the question: Are classical distinctions, such as the noumenal and phenomenal or ontical and ontological, still relevant in the post-digital age? Faisal Devji and Sybille Krämer, participants of “The Weaponization of Language” panel, answer this question by proposing the politics of superficiality. In their two-denominational worlds in which everything is visible and affirmatively taken at face value, the depths of criticism, which supposedly reveals hidden depths (interests, desires, biases), become redundant. But is this enthusiastic embrace of mere appearances not just a subterranean drive of the postcritical? Such revitalizations seem cynical in relation to the festival theme.

Nevertheless, these claims may seem serendipitous regarding the aforementioned analogy. The symbolic economy of trading no longer conforms to the arbitrariness of sign ruled by linguistic conventions. The signifier is not merely split from the signified, as poststructuralism taught us. It is just signifiers floating on a surface and mixing with each other. “Fluidity,” as Ana Teixeira Pinto argued elsewhere, “is the aesthetic ideology of finance. Anything metamorphic can be seen as an analogue of currency.” Indeed, today one can witness unprecedented mutations of long-standing cultural values and the flattening of political hierarchies. Racism without race, feminism without women, and fascism without fascists. Moreover, and according to Pinto’s  presentation (and referenced in texts by Angela Nagle), the tactics and tools formerly associated with progressive forces, such as queerness, transgression, leaderlessness, or appropriation are themselves appropriated by the rightist sensibility.

In reaction against rising multiple fascisms and their affiliation with new technological regimes, Transmediale functions as a minority in adopting the “popular front” opinion — as in the 1930s, when united forces of different political spectrums would work against a common enemy. While some speakers expressed defeatism, like Ewa Majewska, who claimed that the “elite” has handed power to fascists, others tried to map out alternative techno-utopian political imaginaries and forms of coalition. Over the three-day conference component to the festival, assembled by Daphne Dragona, attendees would be told that VR glasses can help us feel empathetic toward alterity, cryptocurrencies are facilitating communism, feminist troll farms are overcoming the patriarchy, and wiki-activism can stop gentrification. It is no coincidence that Audre Lorde’s famous maxim, “the master’s tools will never dismantle the master’s house,” was quoted so many times throughout the program that it became the festival’s unofficial motto.

But maybe instead of policing origins and ownership of technologies, one should question one’s own position. In the context of a festival on digital culture, every personal prophecy of a struggle to come is reminiscent of presentations of start-ups and innovations for potential investors. If there is no technological answer to social problems, as Francis Hunger mentioned during the “Biased Futures” panel, should we look to old-fashioned social theories as suggested by Nina Power, or do we instead insist on the aesthetization of aesthetics and, separately, the politicization of politics put forward by Lioudmila Voropai? The famous Marxian appeal to expropriate the expropriators did not bother to question the purity of technologies — they are capitalist per se. Rather, it emphasized the fact that we were dispossessed long before the development of these technologies.

Andrey Shental is an art critic, artist and curator based in Moscow. 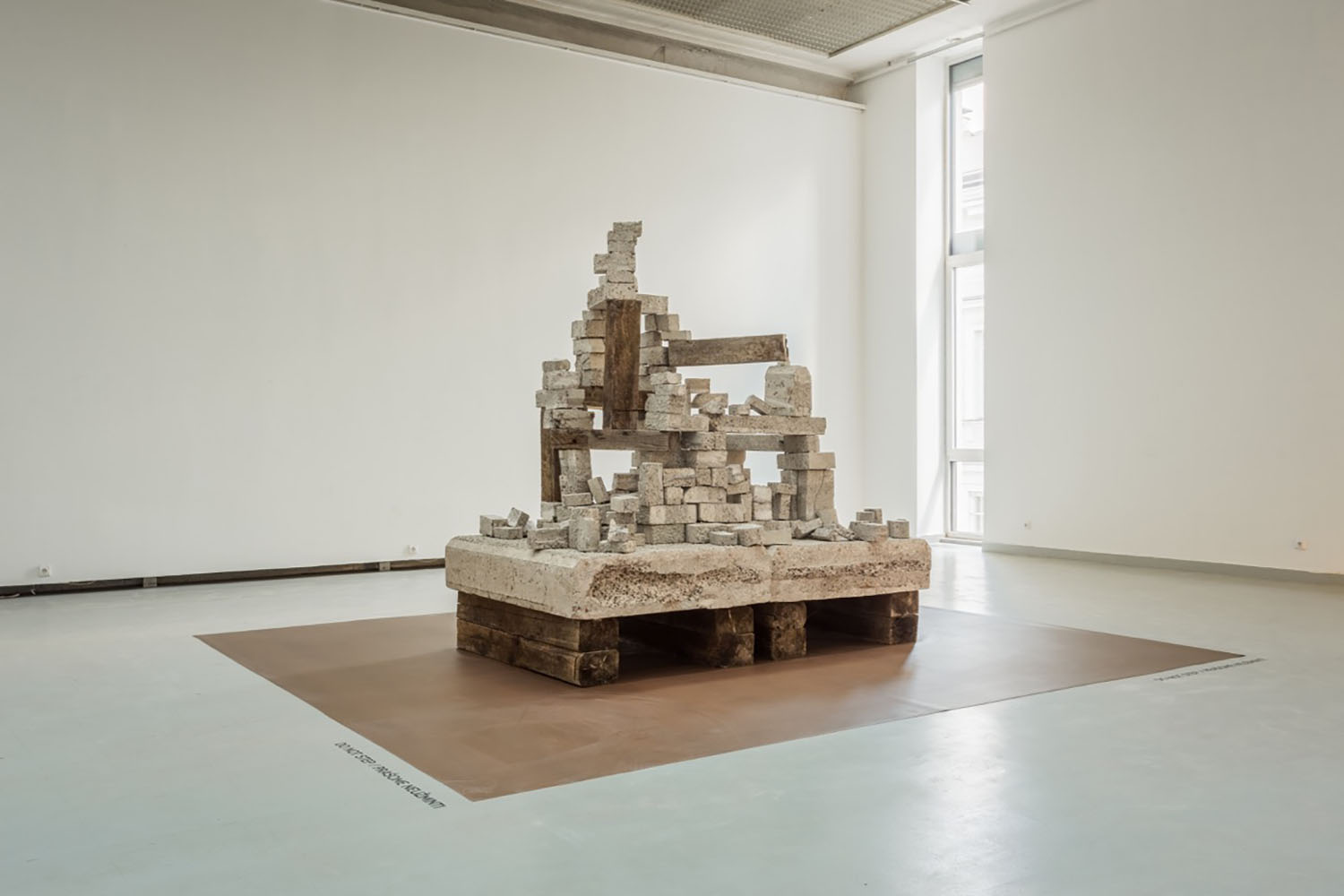 From an objective standpoint, the collective consensus regarding the practice of Lithuanian-born-and-based Augustas Serapinas seems to be that it can…