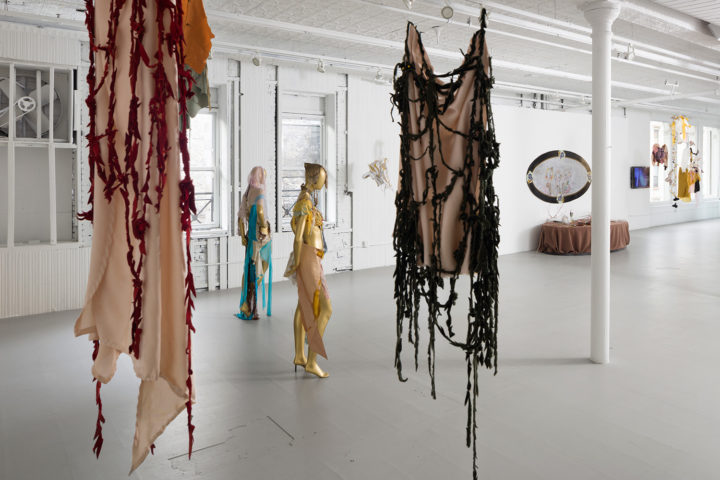 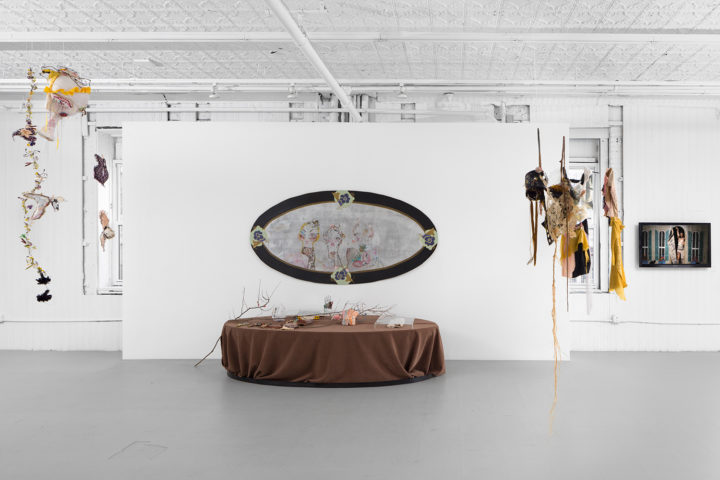 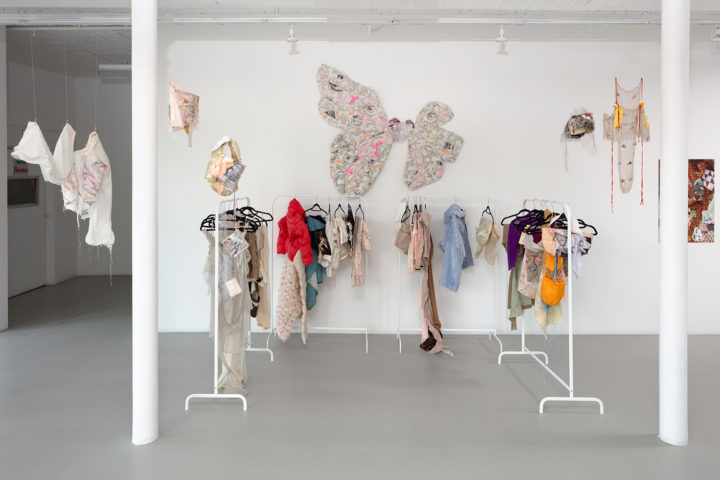 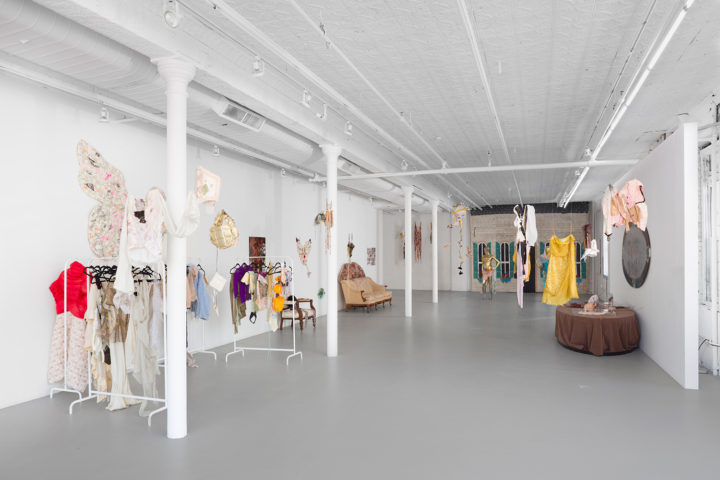 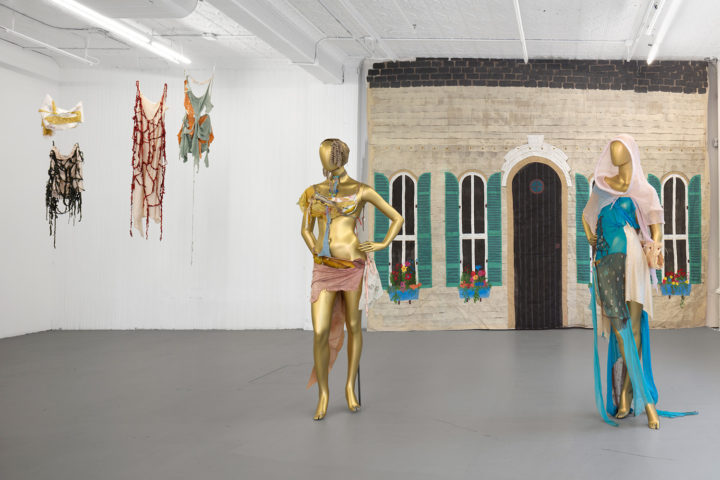 The art of dressing has historically been understood as a frivolous, feminine pastime, reserved for young girls, housewives, and queers of varying kinds. Taking place most often in the home, the salon, or the department store, these delineated spaces of consumption and display were important sites for femme recreation, socialization, and care.

The New York fashion collective Women’s History Museum, founded by Amanda McGowan and Mattie Rivkah Barringer in 2014, sets out to examine the psychic potency of such sites, insisting on dress culture as a space where identity is perpetually undone and reimagined.

Their first stand-alone gallery show at Gavin Brown’s enterprise gathers much of the group’s expansive archive from the last three years of production, spanning tapestries, idiosyncratically upholstered interiors, and lots of garments, all conceived and rendered in a distinctive collage-like approach to repurposed textile. Titled “OTMA’s Body,” the show references the acronym of the four daughters of Nicholas II, the last emperor of Russia, and his consort, Alexandra Feodorovna, all of whom were executed on the eve the revolution on July 4, 1918. Largely confined to their royal quarters, without any agency to alter their fate, the OTMA sisters instead enveloped themselves in a hyper-aestheticized universe, writing diaries, sewing, and endlessly photographing one another. At least this is what WHM imagines: their homespun phantom institution is as much about the sensory potential of storytelling and reverie as it is about reality.

Art’s historical avant-garde, with its militaristic inflection, emphasizes a kind of critique that enforces, transgresses, destroys; as many have argued, this is an inherently gendered imaginary, one that ignores the critical potential of the decorative, the body, and “women’s work” more broadly. Countering this, WHM instead critiques from a point of view of the body, but a body adorned, embellished, draped in thrifted silks and starched crinoline. Like OTMA’s time-passing diversions, WHM’s voice revels in the ephemeral, a historically pejorative term that for so long has been attributed to all types of femme aesthetic production (fashion most persistently).

But for the young collective, escaping what is considered normatively “productive” has political consequences beyond the gender-political and the art-historical: as a fashion label that functions as an art practice, the project transgresses conventions of the mainstream fashion economy by refusing to “produce” straight commodities for insatiable mass markets. Instead, their sartorial output takes shape as community-oriented performances, forms of collaborative imagemaking, and runway shows as much as actual collections: fleeting “fashion experiences” in the broadest sense of the word, sometimes documented, sometimes not. At Gavin Brown’s, McGowan and Barringer invited peers to host events over the course of the exhibition’s duration, including self-help makeup tutorials by downtown artist Gogo Graham, live music sets by Jack Scanlan, and poetry readings by Gabriela Rivera-Morales. Their garments, ranging from a few hundred dollars to several thousand (vernacular haute couture if I’ve ever seen it!), are unique, handcrafted, and meant to be worn, although they function equally well as objects of viewing, of touching, of worship. Stylistically, they provide a rare antidote to the overpowering utilitarianism of contemporary dress, which, via casual smart dress, athleisurewear, and, more recently, normcore, has taken over much of the world’s fashion imaginary since the 1980s. The baroque character of their work — corsets made from medical gauze, antique metallic French lamé — suggests an alternative canon of fashion (Susan Cianciolo’s RUN, Meadham Kirchhoff) that insists on craft not as a co-opted attribute of luxury, but one of psychic, social, and political gravity.

It was Julia Bryan-Wilson who once noted how craft sits with a strange and contested position within the schematic of contemporary consumption, “uniquely positioned to allow us to reconsider the politics of materiality and exchange — their labors, pleasures, and hazards.”  The torn-up, tattered, patchworked textiles that make up WHM’s garments and objects — former brand tags, stains, little holes incorporated as part of the designs — allow us to sense but never fully grasp the tumultuous lifespan of textile and fashion commodities and the hands that, over time, have toiled, touched, and repaired them. Like many of their institutionalized feminist predecessors, they recoup craft as a strategy of feminist institutional critique, while also accounting for the larger environmental and geopolitical context of mass production that all textile manufacture finds itself a part of today.

Ultimately, escaping the oppressive rhythm of the fashion calendar (biannual presentations, retail) allows for a practice that challenges fashion’s most defining characteristic: its relationship to time. With its atemporal approach and community-oriented infrastructure, Women’s History Museum is an institution of histories and dreams, of trauma and healing, of solidarity and friendships, all expressed through the hem of a shirt, in the draped fold of a dress.