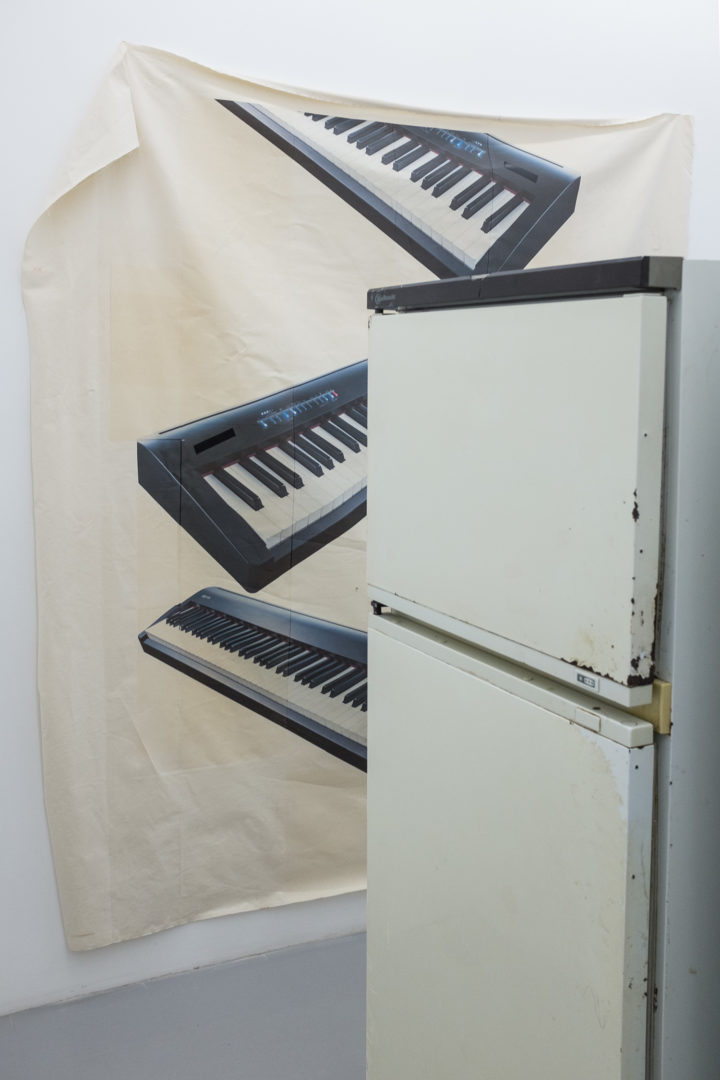 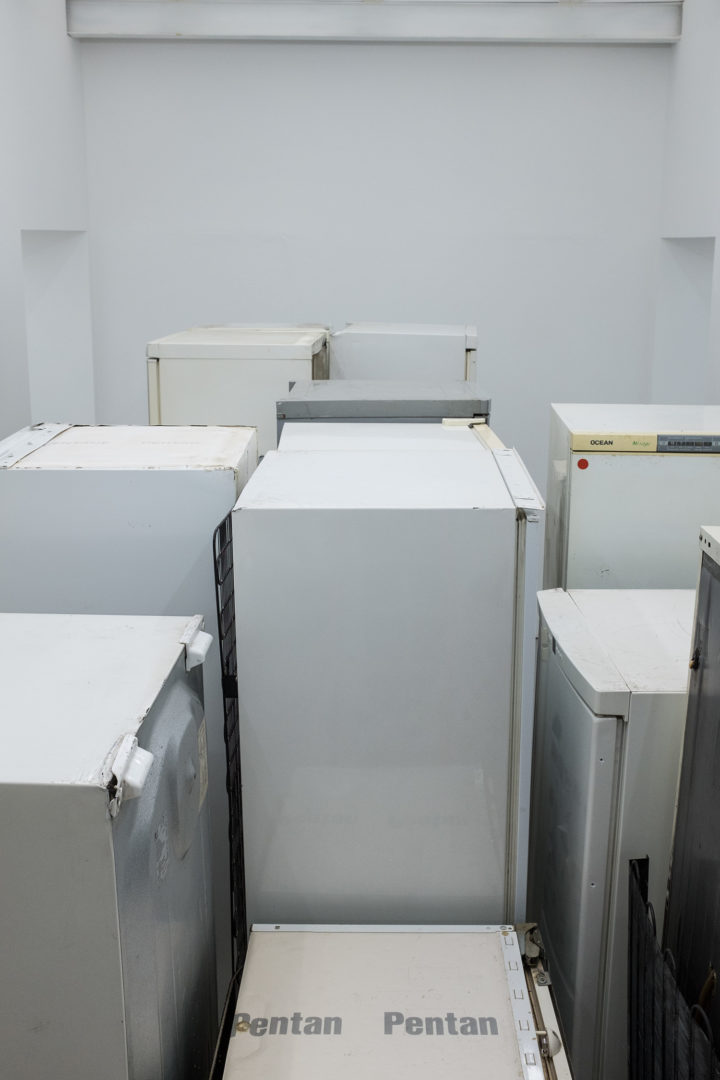 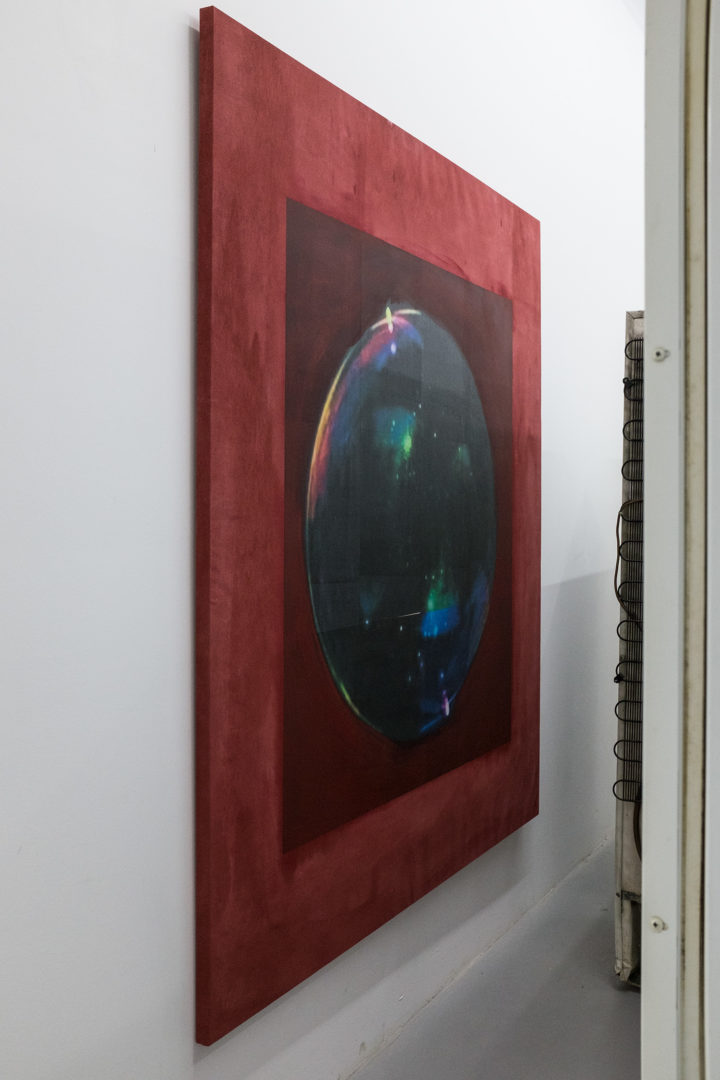 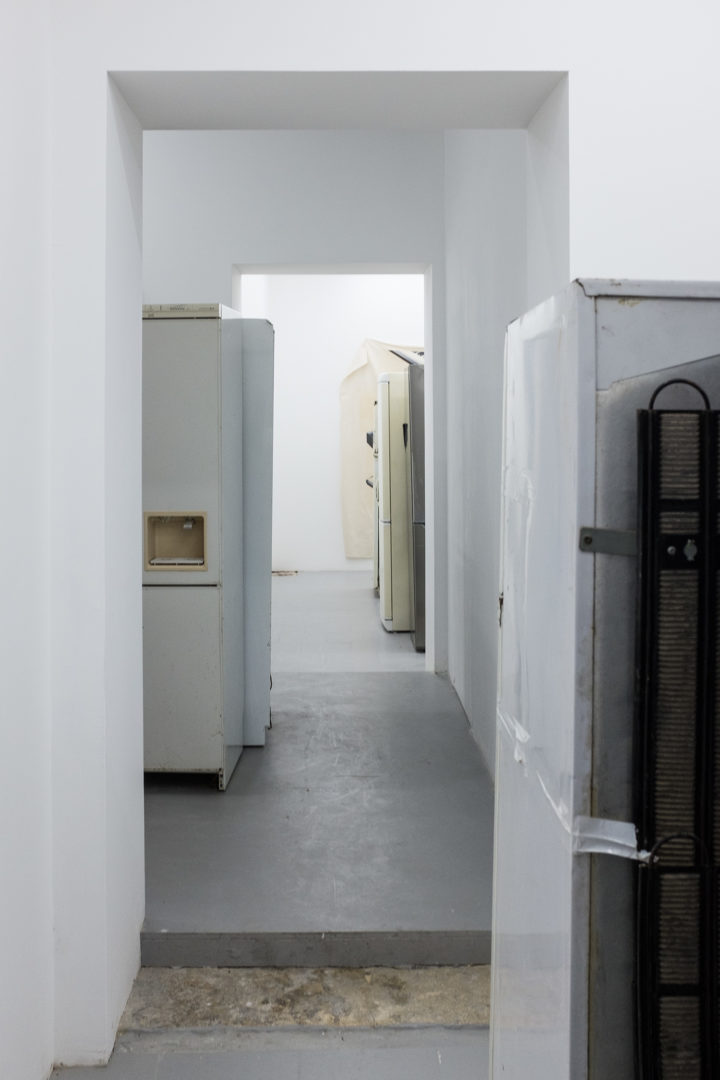 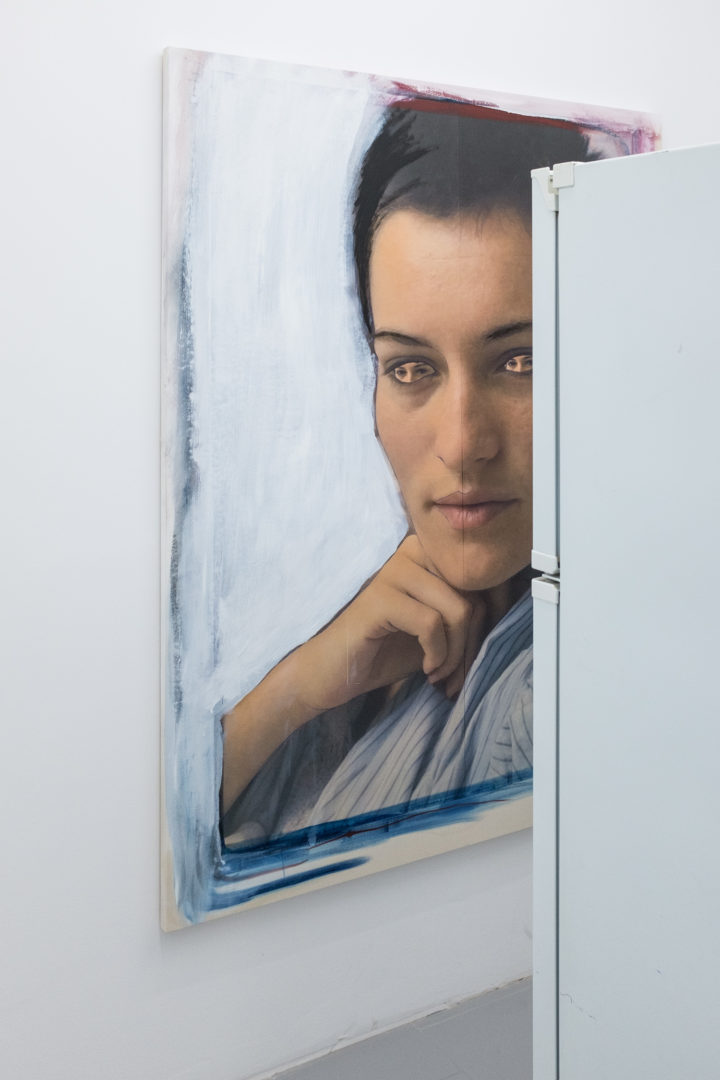 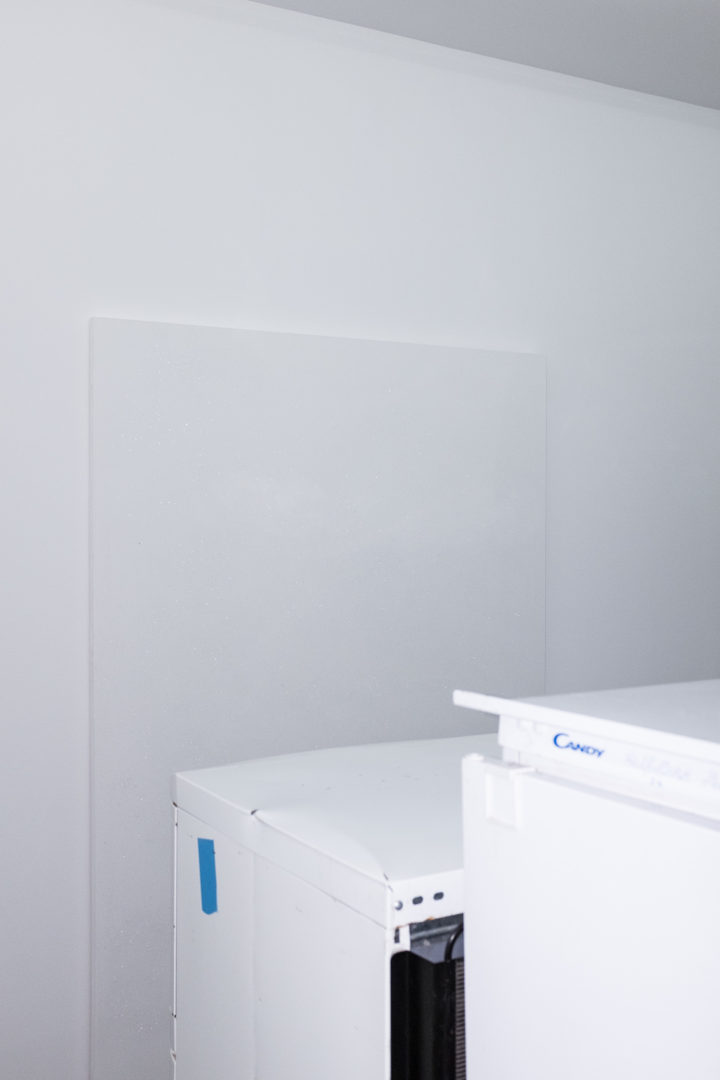 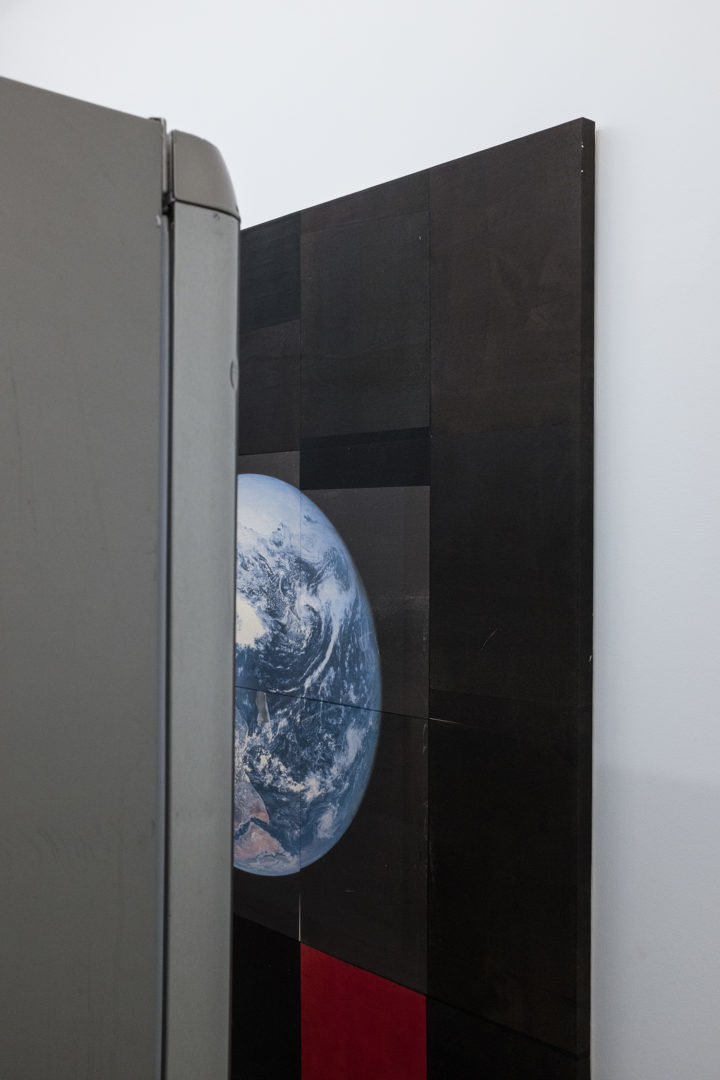 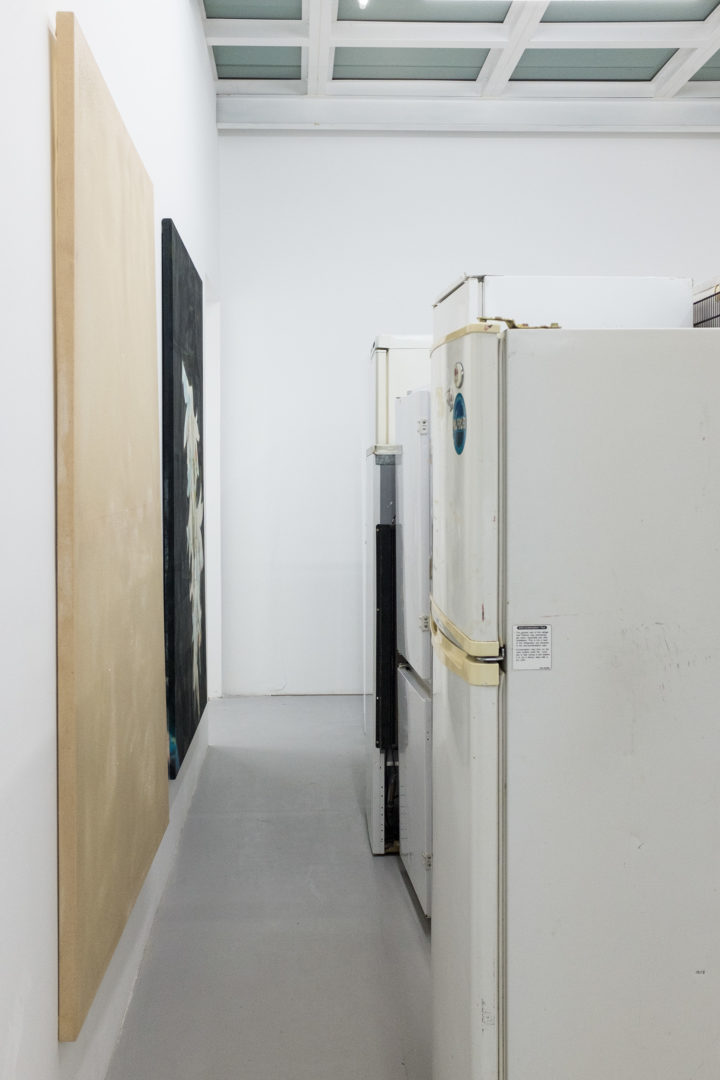 Tobias Spichtig’s solo show is a maze framed by a number of strategically placed refrigerators in each of the four rooms of Malta Contemporary Art (MCA). All of the rooms are quite narrow, typical of the alleys in central Valletta itself. It is not the first time the artist has made such impositions upon the gallery space; at Galerie Bernhard, Zurich, and at Georg Kargl, Vienna, he covered the entire floor with tables and mattresses, forcing viewers to observe his wall-hung abstract and mixed-media works from a distance.

All the fridges used in the show bear the history of their former domestic lives through dents and wear. Similarly, the walls of the gallery space show stains from past exhibitions due to Spichtig’s instruction not to repaint the space during installation. Here, two of his paintings from the “Staring at Canvas” series — made of diamond dust and resin on canvas — are primed with the same plaster normally used on the MCA’s walls. This site-specific expedient will prove elusive to most visitors until they reach the fourth room, which seals them off in a cul-de-sac, penned in by dirty walls and a painting from the aforementioned group, Staring at Canvas, Primed n.1 (2018).

The artist dominates the space with his own intimate narrative, replicated in the visual documentation of the show that he produced himself. Never immaculate, the narrative is intentionally intertwined with found objects that act as witnesses to the places and cultures Spichtig has seen, all ready to be imbued with fresh critical interpretation. Yet the fridge is more than that: for the artist, this most iconic of modern appliances is the equivalent of an “institution.” Painting, on the other hand, represents the mind and sentiment. Despite this conceptual twist, Spichtig’s mission may seem to turn away from any ambition to tackle global issues: the commodification of culture and human relations and the disruptive turn to an internet of things. The reality, however, is more akin to Voltaire’s Candide, who ultimately seeks comfort in the shared and mundane essence of human experience by cultivating one’s own garden.

Consistent with this optimistic intent, the titles of the works are simple descriptions of what the eye sees, such as Piano Piano (2018), a vinyl print of three keyboards on unstretched canvas. The work explicitly conjures nostalgia for analog synth-pop and band T-shirts from a pre-digital era. Other works include (Third Eye, 2018), a portrait of a woman in pajama, her eyes filled with smaller depictions of herself; an image of a soap bubble (Seifenblase Auf Rot, 2018); and a view of the earth, evoking the Apollo 17’s famous “blue marble” image from 1972 (Earth, 2018). The latter leaves the viewer with a deep sense of weightlessness — indeed, a sense of lost humanity — while navigating back to reality through the artist’s maze of mind games and white goods.