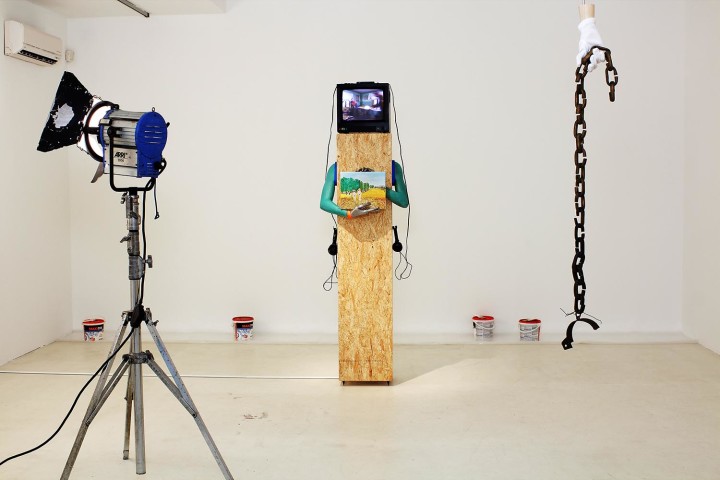 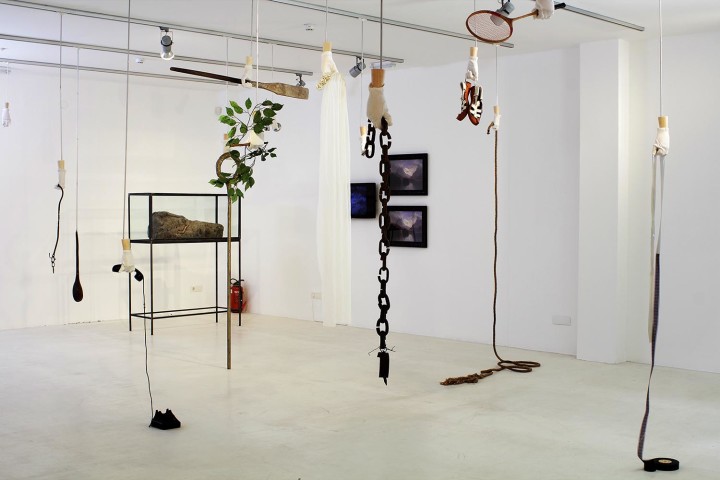 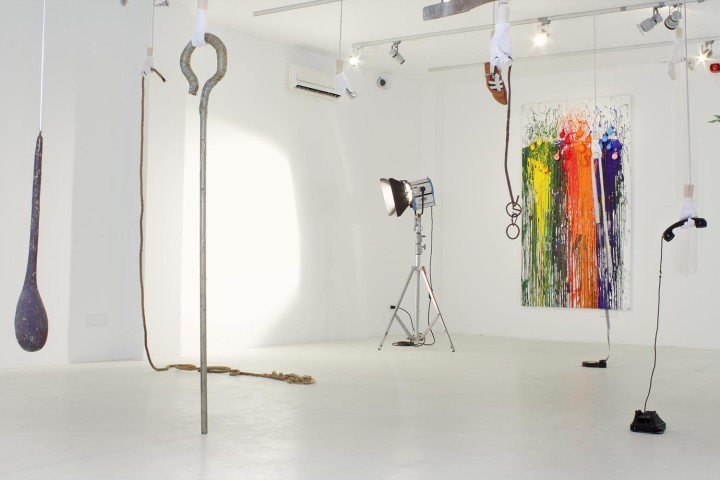 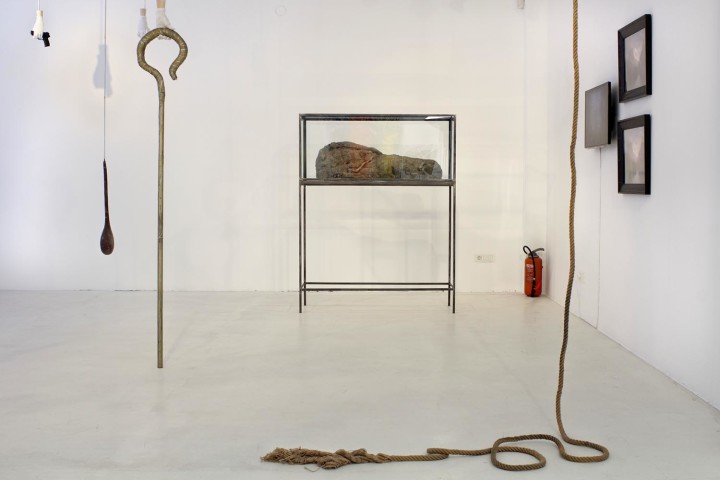 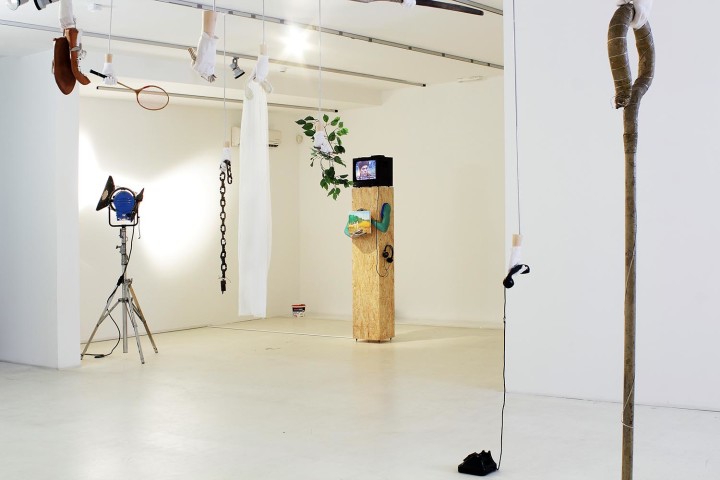 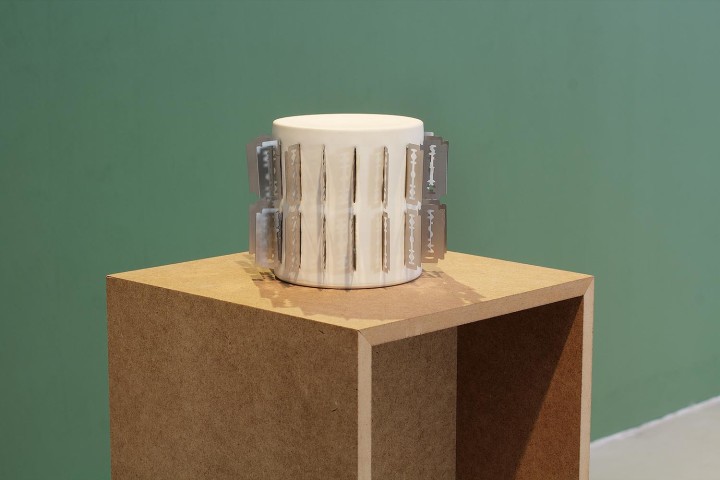 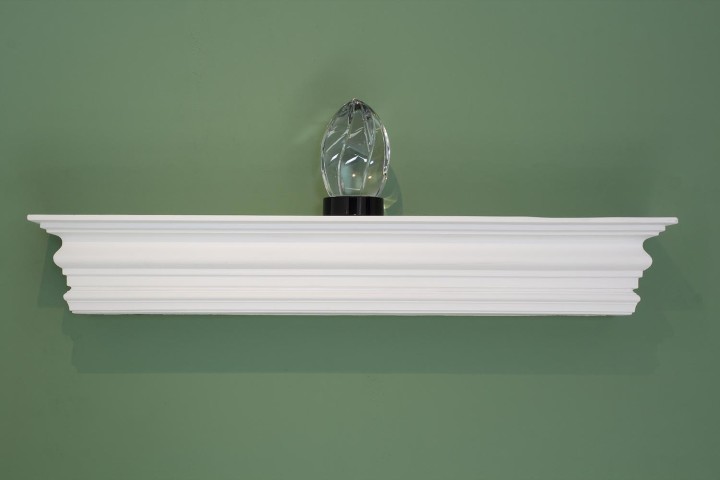 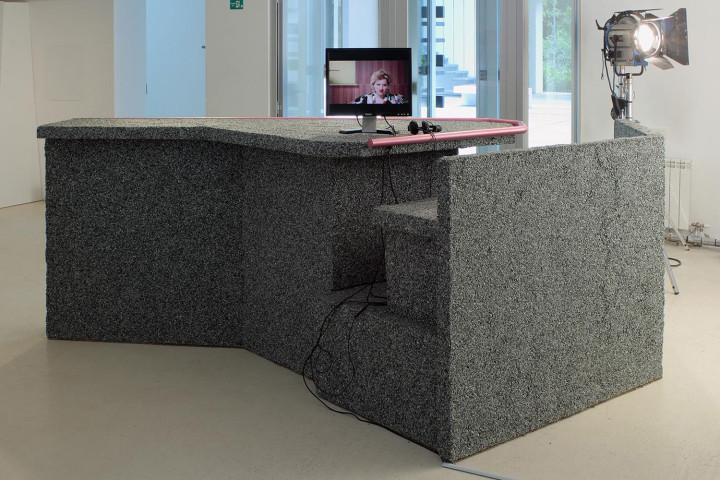 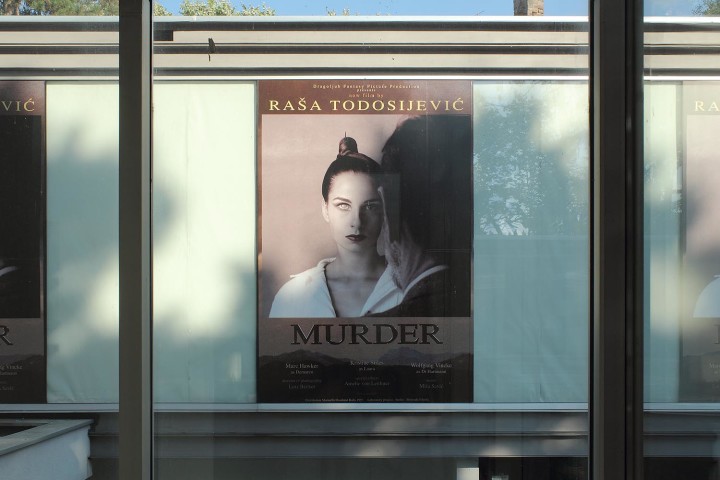 “Fade In 2: Ext. Modernist Home – Night” is the first manifestation of Balkan Projects, a platform established by actress and art collector Marija Karan with the aim of reinvigorating the Balkan art scene. The exhibition brings to Gallery-Legacy Čolakovićy, a satellite venue of Belgrade’s Museum of Contemporary Art, twenty-one artists whose works engage with the ways the visual arts are portrayed in movies.

Revisiting props, settings and plot devices, these works confront the film industry’s power to mesmerize by inverting the process of appropriation and in a sense reinstating art’s autonomy relative to filmic narratives. On a spartan pedestal, Carissa Rodriguez’s glazed ceramic cups pierced with razor blades — copies of the Daniel Pommereulle sculpture that in Eric Rohmer’s film La Collectionneuse (1967) triggers a profound conversation between an artist and his dealer about their respective roles in society — can’t but speak for the unsettling objects that they are. However, if we are sincerely moved by the mordancy of this Nouveau Réalisme specimen, are we more affected by Pommereulle’s work or by Rodriguez’s sanitized (and multiplied) version, which is deprived of much of the original’s rough artistry but charged with Rohmer’s commentary on artistic bohemianism? Hard to say.

The exhibition is a “sequel” to “Fade In: Int. Art Gallery – Day,” held in March 2016 at the Swiss Institute in New York. Compared to the “pilot,” the Belgrade iteration (which is curated by the SI’s team together with Julie Boukobza) boasts a rather cinematic location. Formerly a private residence and a restaurant that, rumors say, served as a hotbed for the local mafia, the Gallery-Legacy Čolakovićy’s ubiquitous modernist architecture recalls the backdrop of many Hollywood movies.

Upon entering its courtyard, Tobias Spichtig’s fire-breathing, steampunk fountain Heiner Müller (2017) immediately triggers the fantasy. One of the interior rooms offers another powerful setting: William Leavitt’s corny tableau with matching sofa, end table, plant, picture and lamp (Set for The Tropics with Jaguar [from “The Tropics”] [1974]); Alex Israel’s Risky Business (2014–15), in which the artist has re-created the crystal egg from the eponymous 1983 film; and Ulises Carrión’s video The Death of the Art Dealer (1982), shown on a television atop a small bureau. Together they form an uncanny domestic environment in which an unknown scene waits to be played out — though certainly not a love story.