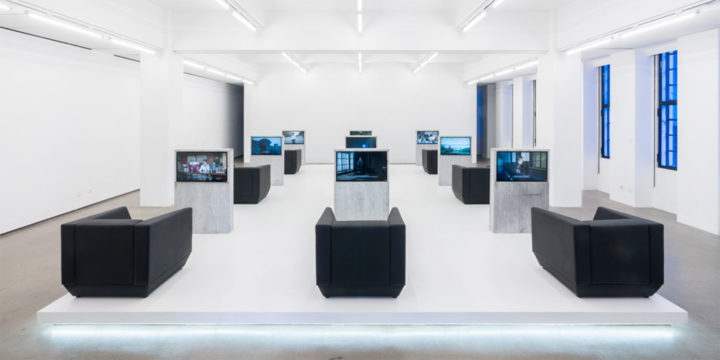 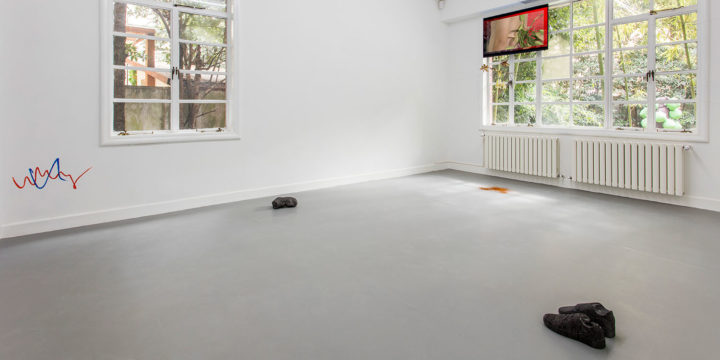 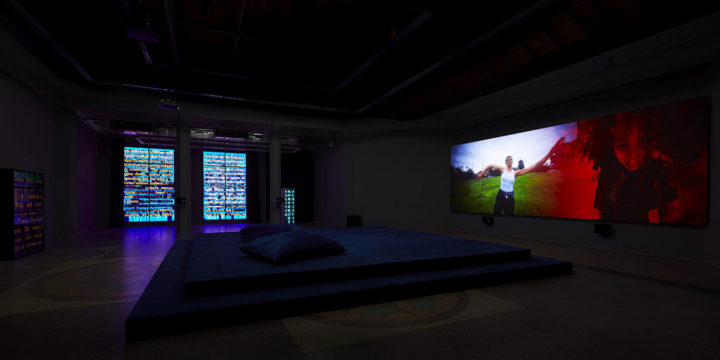 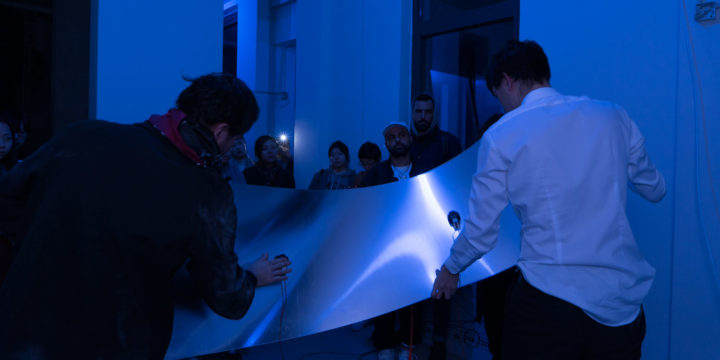 Throughout the week of Art021 and West Bund (the two fairs trumpeting Shanghai’s unofficial art week), I found myself guiding people while remarking on gallery relocations, the rise and fall of different art districts and the spooky past of West Bund as the largest execution ground during the Cultural Revolution. And then there were moments when I was surprised to find a brand new institution about which I had no clue, leaving me embarrassed and seeking help from the internet. Wandering the streets of Shanghai during art week feels like navigating a sprawling infrastructure of imploding newness. Almost every space smells newly renovated, and every exhibition is an artist’s first solo on the mainland.

Most young institutions along the Bund safely exhibit solo shows of well-established, non-Chinese artists. While one might view this trend as the new normcore in Shanghai’s art scene, it enables the third Hugo Boss Asia Art exhibition at Rockbund Art Museum to stand out as an absolute highlight of the season. For the first time, Rockbund has addressed its spatial constraints and reduced the number of exhibition finalists from six to four — Li Ming, Tao Hui, Yu Ji and Robert Zhao — giving each a separate floor to present new and old works. The result is an exceptional presentation. Here, each participating artist is a master of their practice: Yu Ji’s psycho-geographical study of the urban environment, which subtly bleeds into her adept play with rich sculptural materials; Tao Hui’s longstanding investigation into melodramatic form and the possibilities for universalized experience via networked visual culture; Zhao Renhui’s artistic appropriation of the language and conventions of science in order to investigate how history — both natural and social — can be constructed by existing systems; and Li Ming’s daring multidisciplinary restructuring of how the exhibition space affects the spectator’s perception of place and time. The latter was named winner of the Hugo Boss Asia Art Award by a jury panel of six artists and curators.

After a considerable number of galleries moved to West Bund, Antenna Space, which advocates a strong selection of local and international artists, including Guan Xiao and Nancy Lupo, is now generally regarded as the placeholder of the M50 creative district. Its fall exhibition, “Wu Tsang: Sustained Glass,” upholds that reputation. (At first, I felt a bit ethically uneasy including it in this report due to my involvement in producing the exhibition as Tsang’s research assistant, but it really stood out to me and most people I’ve talked to, so here’s a note to clarify.) The exhibition consists of a new two-channel video work titled We hold where study (2017), which Tsang developed in collaboration with poet and longstanding collaborator Fred Moten, along with a series of stained-glass and lightbox works. The exhibition’s critical intent is fuelled by references to the precarious condition of marginalized cultures in today’s sociopolitical crisis — particularly that of African American culture, as addressed in a video piece that clearly references the recent shooting death of Michael Brown. The exhibition marks China’s increasing interest in black cultural appropriation; the ongoing discrimination among Han-dominated peoples against black immigrants and religious minorities (such as the Muslim Hui) in cities like Shanghai make the discussion all the more urgent. Yet, instead of falling into didacticism, Tsang uses glass — a metaphorically rich material that connotes queer trauma in the Chinese language as well as imagination and communion in Western literature — to convey these concerns in an open and evocative spatial installation. The pain, rage and hope that’s left unspoken is palpable.

Over the past year, a mini art hub has been growing in the center of Shanghai’s former French Concession, with the inauguration of Capsule Gallery, the relocation of BANK Gallery and, now, the new gallery VACANCY located a one-minute walk away from Closing Ceremony, a unique photography bookstore open only on weekends and run by Shanghai-based self-publishing studio Same Paper.

Sociality as a central concern extends beyond Tsang’s exhibition at Antenna Space. Wang Xu and Cici Wu, founders of the New York gallery PRACTICE, make their curatorial debut at Capsule Gallery with “Scraggly Beard Grandpa,” which was being hyped by my close friends even before its opening, most of whom either knew the curators from their time in New York or who have spent time studying and living abroad and thus can relate to the always-ambivalent feeling of communion and displacement. Xu and Wu, who are also artists themselves, invited twelve artists (and alumni of their residency program in New York) to present new works, asking audiences to trace the marks that a memory of a bygone space has left on each artist’s practice. In certain instances, like the sculptural dialogue between Irini Miga’s fragile, hole-in-the-wall installation Landscape for a Thought (2017) and João Vasco Paiva’s The Last Kauai Oo Bird I and II (2017), a sense of communicability is particularly strong. Whereas other works, like Zheng Yuan’s exhaustive video essay, Game (2017), on evolving perspectives in video games, and Xinyi Cheng’s quiet paintings, feel somewhat unaffected by the curatorial premise. An unspoken naiveté may underlie PRACTICE’s celebration of friendship, but in our greatly accelerated, teleological time, there is perhaps much to gain from this sense of purposelessness.

Over at West Bund, in the six-month-old space of Edward Malingue’s Shanghai branch, sandwiched between MadeIn Gallery and Don Gallery, Taiwanese artist Chou Yu-Cheng has sworn to fill the gallery with the purest air in town. With a title that plays with today’s hashtag keyword economy while referencing The System of Objects by Jean Baudrillard, “Refresh, Sacrifice, New Hygiene, Infection, Clean, Robot, Air, Housekeeping, www.ayibang.com, Cigarette, Dyson, Modern People” brings together paintings, sculptures, performances, brand sponsorship, robots and an app operating system to probe the aesthetics of “hygiene” — a set of practices that has grown in tandem with the diseases of modernity. The gallery space is divided into three sections by a sky-blue platform in the middle, on top of which rests a pile of oversized dining utensils and a cleaning bucket. The left side of the platform recalls a typical gallery setting, with a series of sculpted objects reminiscent of home-furnishing accessories mounted onto the wall; to the right side of the platform, a dozen Dyson Pure purifying fans, capable of capturing 99.95% of particles as small as .3 microns, and a team of robot vacuum cleaners tirelessly guard the space. The exhibition is further accompanied by a weekly performance at an undisclosed hour, when a cleaning lady, hired through the popular mobile app “ayibang,” cleans the art objects on view. Over the last two weeks of the exhibition, the artist will remove all the sculptures, leaving behind an empty gallery space with only the cleaning equipment and the display for the cleaning service app. By highlighting typically unseen processes related to the display of artworks in a contemporary gallery — the conditioning of air and other measurable aspects of its pedicured environment — Chou’s exhibition is a performative deconstruction of the gallery space that furthers his longstanding engagement with the social dimension of aesthetics.

Upstairs from Edward Malingue, Don Gallery’s tenth anniversary exhibition, “Shanghai Dandy,” proposes dandyism as the creative spark driving a thriving generation of Shanghai-based artists. While the link to the urban flaneur is more obscure in some works than others, here we finally have an exhibition, from one of the oldest contemporary art galleries in the city, that takes a stab at a homegrown aesthetic. One block away at Yuz Museum is “Shanghai Galaxy II,” another exhibition that takes Shanghai as its muse. The exhibition is certainly cosmological in its scope, gathering an extended list of artists whose connection to Shanghai ranges from the unequivocal to the nearly nonexistent. But Ming Wong’s spectacular Next Year / L’Année Prochaine / 明年 (2016) is enough to provoke a poetic reflection on Shanghai’s past and present. Loosely based on Last Year at Marienbad (1961), Alain Renais’s avant-garde classic in which notions of place and time remain obscure throughout, Wong’s work restages several excerpts from the film in a Shanghai café named Marienbad and several other locations in the city bearing Western architectural influences. Wong performs both female and male protagonists and employs meticulous editing to continuously juxtapose his/her face and the surrounding mise-en-scène with those in the original film. In Shanghai, a hybrid metropolis where colonial architecture shoulders postmodern skyscrapers and youths with techno fever can leave a club to grab a local breakfast at sunrise, the destabilized perceptions of space and time Wong so evocatively captures are all too familiar.

Sergei and Stefan Tcherepnin’s sound performance at Ming Contemporary Art Museum delivered a spooky yet serendipitous end to an overloaded week. Titled “Ten Tones: Inside and Outside the Major-Minor,” the project was developed over the span of a year and marked the last act of “Proposals to Surrender,” an exhibition curated by Biljana Ciric that reflected on the place of performativity in an institutional context. Having set out to research the history of their grandmother Lee Hsien Ming, who was the first woman pianist to graduate from the Shanghai Music Conservatory in the 1930s, the Tcherepnin brothers were disappointed with the materials they found, which all spoke of her in relation to their grandfather, the famous composer Alexander Tcherepnin. In response, they developed a project that conjured the spirit of Ming, both as a central figure in their own family history and as someone who historically provided a musical bridge between China and the West. The story unfolded over two nights in an empty villa, where audiences were invited to piece together their own impressions of Ming through photos and sonic fragments that the Tcherepnin brothers arranged in makeshift installations throughout the building. Amid wayward, crisscrossing sound cues that irregularly played, lingered and abruptly vanished, multiple worlds seemed to converge, taking participants out of the vacant villa — a generic instantiation of vampiric real estate development — and into Shanghai’s modernist past. By playing a personal note in a minor key, the Tcherepnin brothers managed to conjure a community of ghosts, distilling romance from hauntology.

Perhaps it was the ghostly aura inside the empty house, or the fact that the Tcherepnin brothers’ grandmother and Ming Wong share the same first name, or perhaps a bit of both; but on my way home from Ming Contemporary Art Museum I was haunted by the yellowed photo of Lee Hsien Ming, and the face of Wong dissolving into that of Delphine Seyrig, the female protagonist of Last Year at Marienbad. Living through this city’s increasing acceleration, where multiple worlds densely converge, time feels truly out of joint. In her column for Kaleidoscope on the evolution of visual culture in Asia, Venus Lau, who also currently resides in Shanghai, speculates on a (re)turn to the underworld in our dystopian imaginations. At this moment, her chilling thought experiment feels particularly apt.

Alvin Jiahuan Li is a writer based in Shanghai, China, and a contributing editor for frieze and Ran Dian. From 2016 to 2017, Li worked as English editor for the Ullens Center for Contemporary Art in Beijing, where he co-curated the exhibition “The New Normal: China, Art, and 2017.”