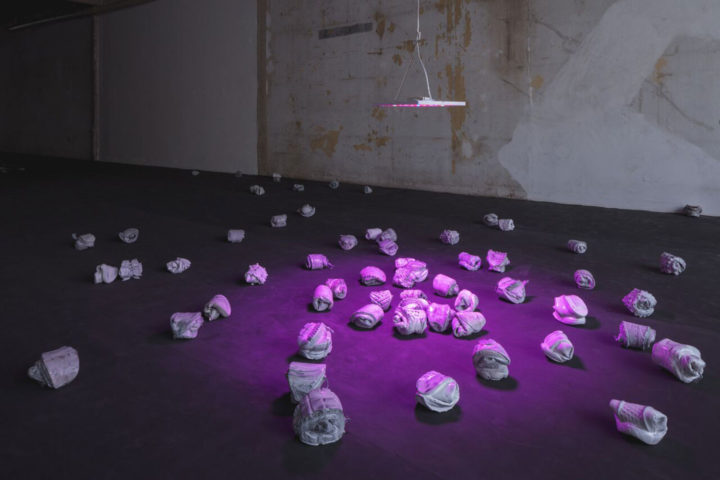 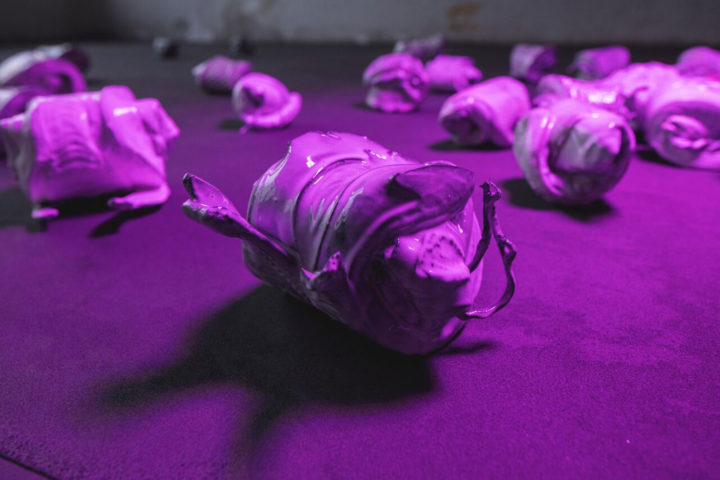 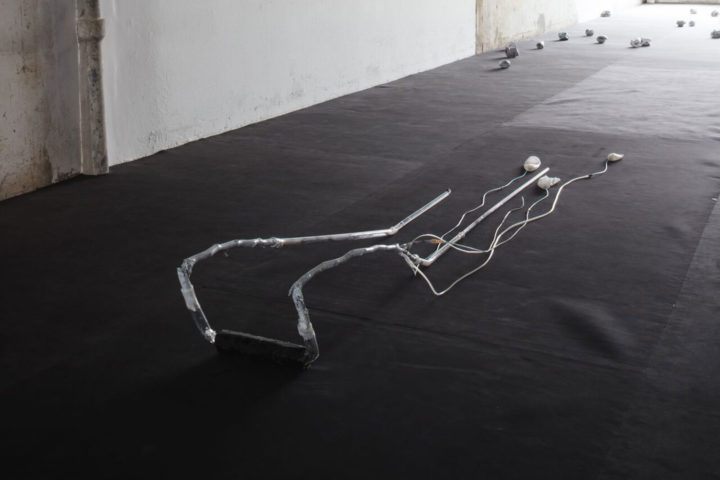 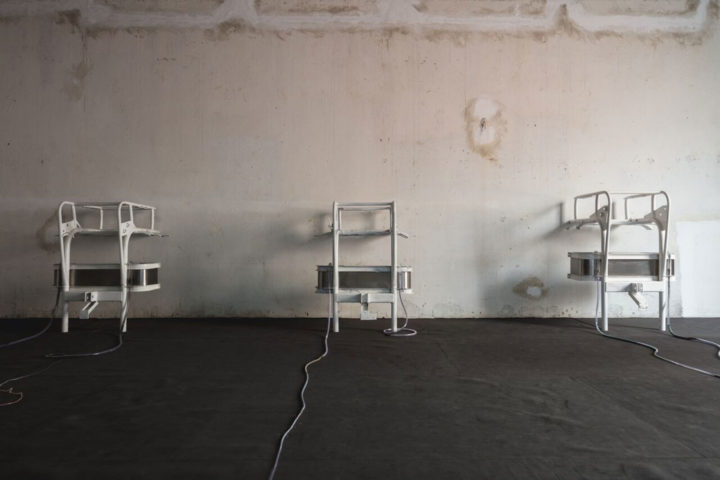 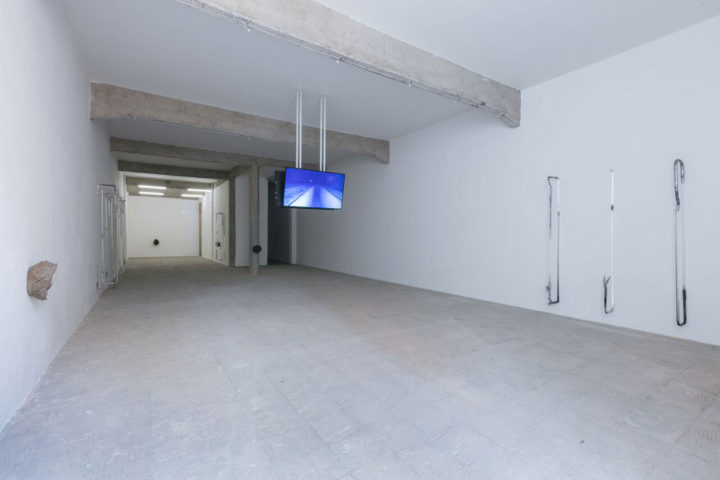 In order to produce the works presented in his first exhibition at Jaqueline Martins Gallery, Adriano Amaral returned to his grandparent’s farm in Poços de Caldas, located in the Brazilian state of Minas Gerais.

Upon entering the ground-floor gallery space, the viewer encounters an abandoned wasp’s nest, the first out of five in this room, accompanied by loudspeakers that emit minimal bug sounds. Two video loops on suspended flat-screen monitors (Rurais, all works 2017) depict drone footage from a night around the farm. Modified with a blue filter treatment, the images evoke a clandestine military operation or a somnambulist passage through the grounds of a decaying laboratory or sci-fi farm.

The exhibition continues in the upper gallery, where viewers are invited to take off their shoes and step onto a floor cladded with black neoprene panels. Here the ambience of a laboratory is epitomized through seventy sculptures produced from trainers and soccer boots, all collected from farm workers and conserved through a process of silicone immersion. A suspended ultraviolet light creates the illusion of these sculptures as animated research objects.

The combination of organic materials such as bones and feathers with inorganic silicone and solid and hollow acrylic tubes — sculpted through a process of burning, mending and amalgamating — alludes to a fusion of human and artificial intelligence. In one of the many untitled pieces installed throughout the show, silicone casts of corncobs are connected to hospital tubes that merge with a tree branch. The junction of the two acrylic tubes that support the arrangement is wrapped with a cracked laptop screen.

Positioned against the rear gallery wall, the artist appropriated three tractor appliances used on the farm for fertilizer pulverization and modified them by attaching water tanks. Alluding to productivity in the absence of human company, the water tanks now emit the almost-inaudible reverberations of evaporating liquid.

If, as the press release claims, the exhibition is an attempt to formulate a “new understanding of our environment as a network-based platform,” one is rather held spellbound by a series of alien objects that leave no potential for interaction, only contemplation. The apocalyptic scenario laid out by Amaral is instead suggestive of a post-human condition in which corporations, with their scientific products, have taken control. 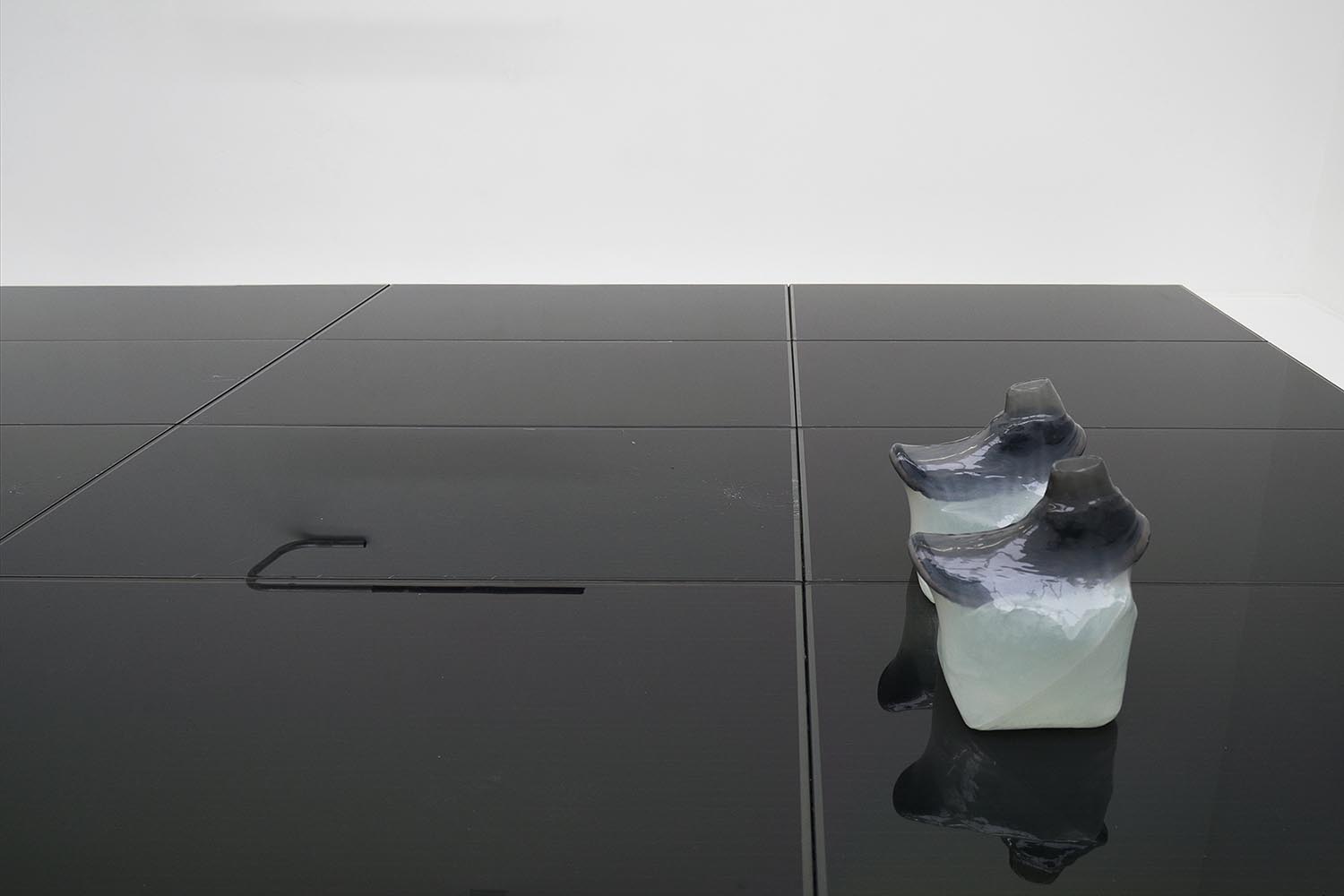 An atmosphere of nonspecific impending doom seems to pervade the spaces of Adriano Amaral’s “Alloy Alloy.” Set against sterile white…