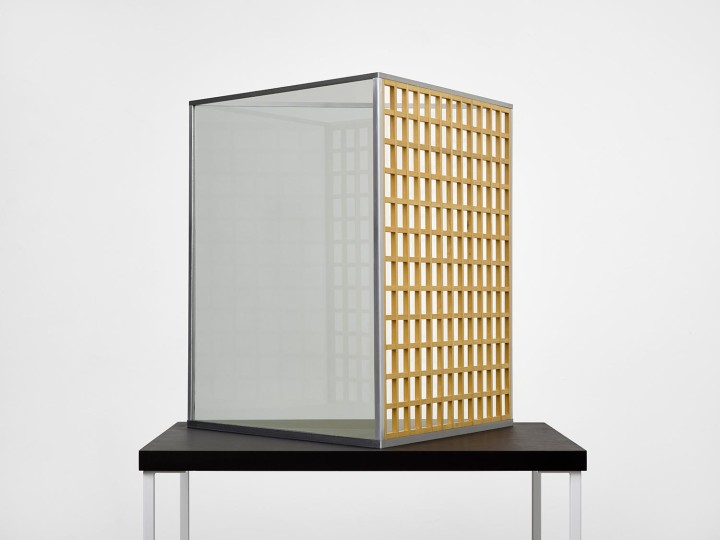 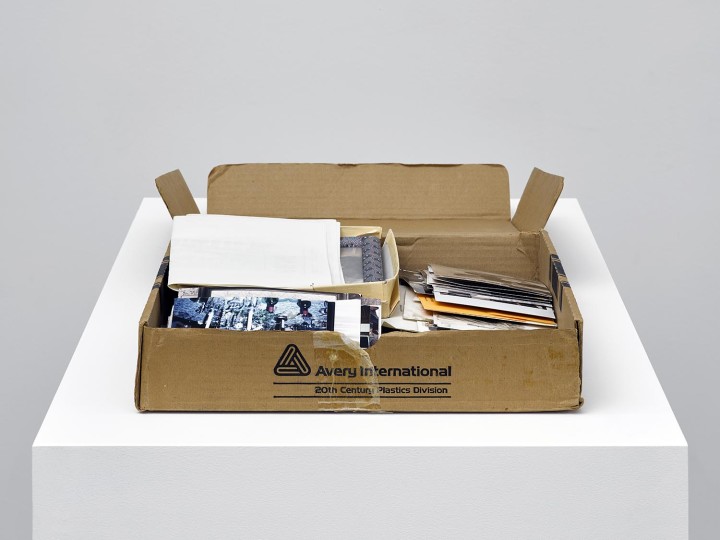 Marcel Proust praised the eighteenth-century painter Jean-Siméon Chardin for charging still life painting with the vibrancy of intimate secrets, revealed in mundane and humble subjects. The exhibition “A still life by Chardin,” curated by Essex Street director Maxwell Graham, proposes a selection of works that similarly display a disarming modesty and economy of material.

A set of postcard-size photographs line up the wall at reception. Documentation from Lisson’s early history shows the gallery in 1973 when Michael Asher proposed to cut an architectural reveal into the gallery walls at floor level. At the time, the intervention was so discreet that it left visitors confounded about walking in an empty room, yet today it has become a signifier of the white cube. Another black-and-white image shows an assemblage box by Audrey Barker, exhibited at Lisson in 1967. A compartment from that same exhibition is included in this show. Reminiscent of works by Joseph Cornell, a friend of Barker, the assemblage exudes a delicate beauty in its essential composition.

Barker, who suffered debilitating bone damage as a result of childhood illness, became an advocate for people with disabilities. Like her, other artists in the exhibition saw art as a vehicle for social engagement. Jef Geys worked as a public school teacher as well as being the editor and publisher of his local newspaper since the 1960s. After attracting attention for her conceptual interventions in the 1980s, Laurie Parsons dropped out of the art world to devote herself to social work and campaigning for the rights of the mentally ill.

Time spent with objects seems to charge them with a heightened presence. An archival cardboard box of ephemera and personal photographs by Parsons becomes a touching memento of intimate moments. Pati Hill, also a model and accomplished novelist, produced poetic images by photocopying common objects such as gloves, paving stones or garments. These images emerge like ghostly presences from intensely saturated blacks, created using her own IBM copier. Moyra Davey’s photographs of her own studio, calibrated compositions interrupted by postmarks, folds andbits of tape, become vehicles between the intimate and the public space of the gallery. .

In its understated reflection on capturing the essence of things, “A still life by Chardin” offers a poignant alternative to today’s prevailing modes of operating in the art world. The exhibition reveals personal stories of integrity, told by artists for whom an ethical engagement with the world is inescapable.