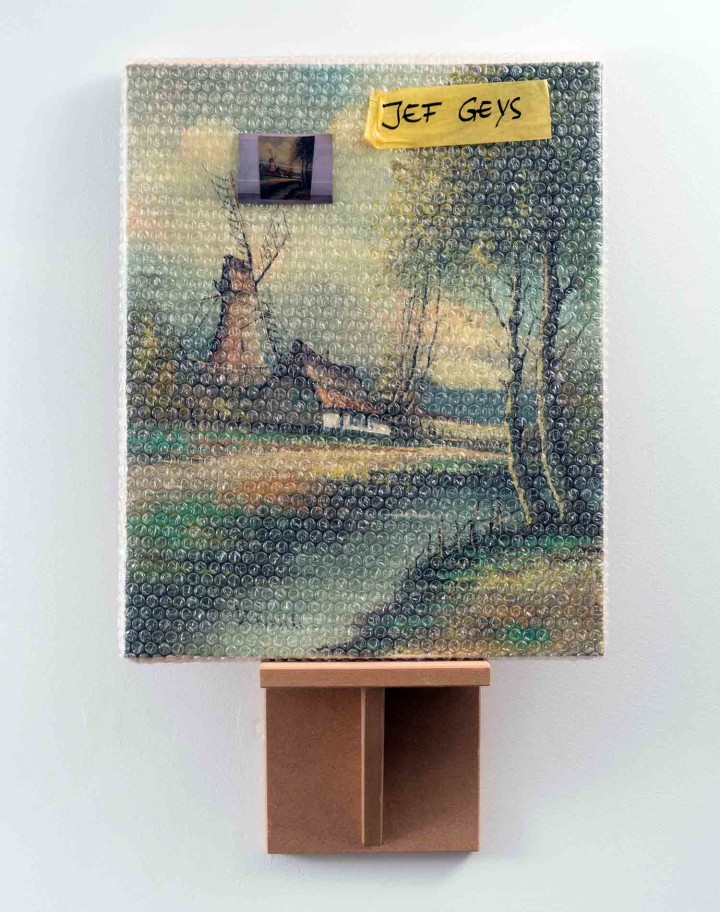 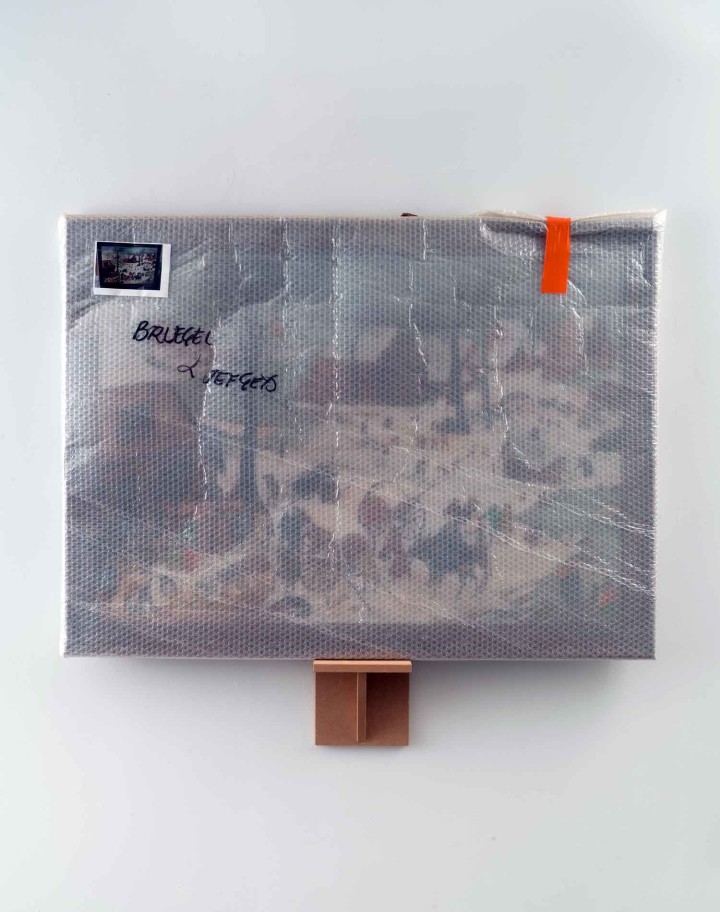 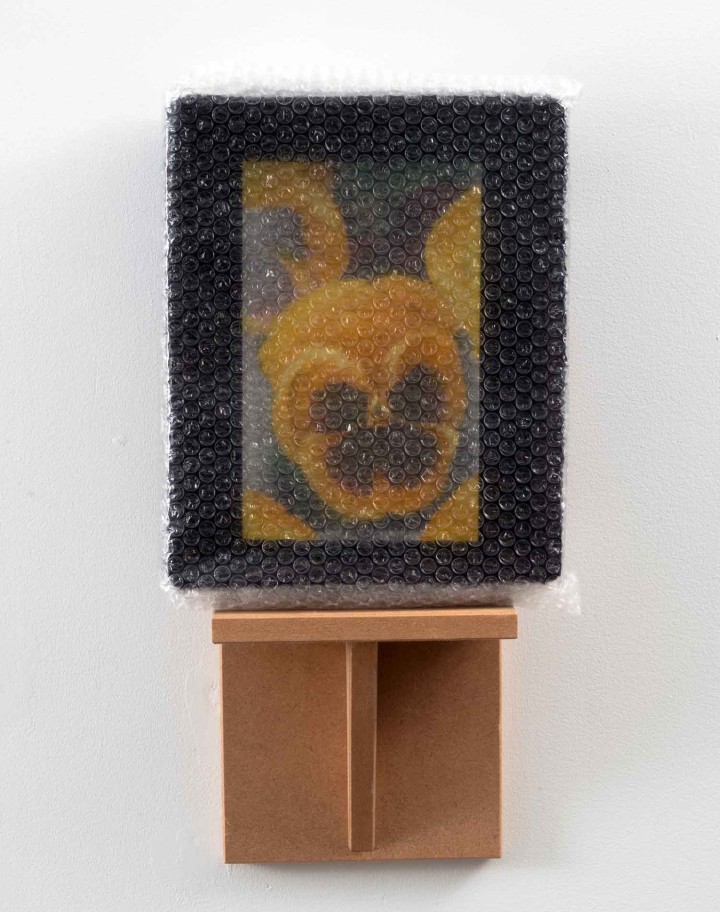 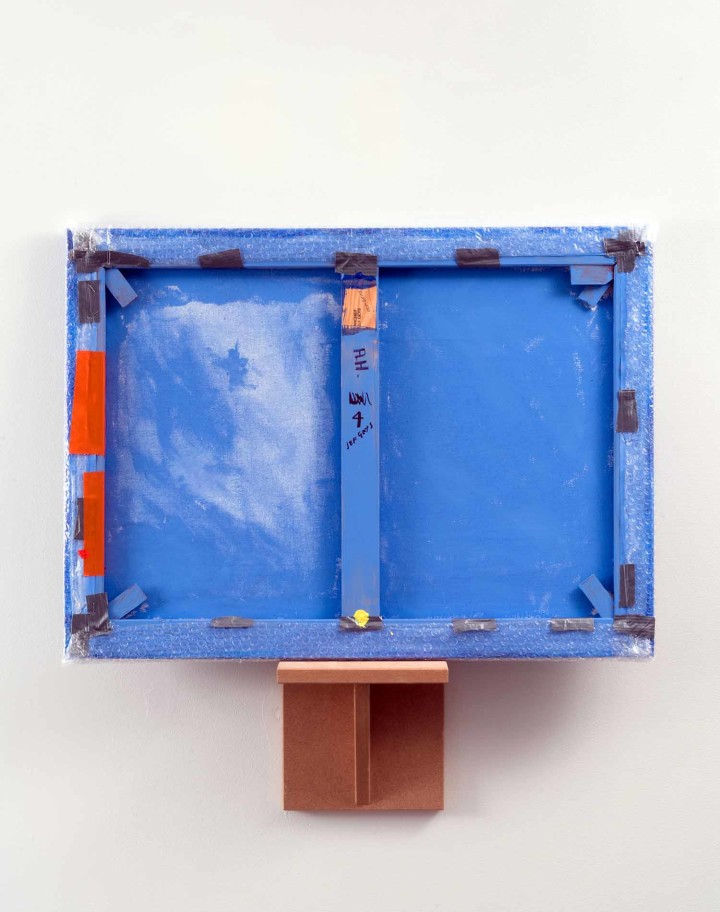 In spite of the fourteen paintings on view at ESSEX STREET, Jef Geys isn’t interested in making abstract paintings, per se. Having served as the editor and publisher of his local newspaper in provincial northeastern Belgium, Kempen Informatieblad, he’s a self-appointed newspaper man, and his exhibition “Bubble Paintings” — which essentially seems to collect paintings from his storage unit and exhibit each work in its bubble wrapping — demonstrates a plainspoken and unceremonious approach at odds with the art world’s often self-fulfilling specialization.

In fact, it’s Geys’s straightforwardness that makes him so enigmatic, because it requires us to grapple for who, what, where, when and why.

The only gestures that are recognizably “painterly” or “artistic” in the entire exhibition are the daubs of red, blue and yellow paint that mark the packaging, as one might seal an envelope with wax. Were we to begin looking for further clues about these works, the press release assiduously explains that Geys updates the dates of each to 2017; that prices correlate directly to scale; and that the artist designed the entirely nondescript shelves that support each piece. By emphasizing these details, Geys prioritizes the bureaucracy surrounding an artwork, and though it is possible to have a pleasant visual experience — the purples and yellows in Violet (2017) pierce the muddying effects of the plastic wrapper — the show poses the visual as incidental, or merely a matter of taking note.

All this suggests that Geys sees artmaking and viewing as redundant enterprises. The show itself intimates that there’s an overabundance of art packed up and stowed away. A banner hanging high on the gallery’s back wall reads “Marie Gouze” (MARIE GOUZE, apparently undated), which the press release leads us to believe refers to an eighteenth-century French abolitionist playwright and pioneering feminist figure. Attempting to reconcile the reference against the show’s systematic redundancies, however, instills a sense of doubt. “Marie Gouze” merely sounds like a typical French name.

I once encountered an entire storeroom of Donald Judd sculptures that had been stored so long in bubble wrap, the plastic off-gassed and imprinted the bubble pattern across every pristine surface. They had been authored by a collective assumption in their value, which remains a part of them even in their ruin. I saw them underneath a more sophisticated encasement — a walk-in shadow box also composed of bubble — but what difference did it make? In effect, they could never be unwrapped.