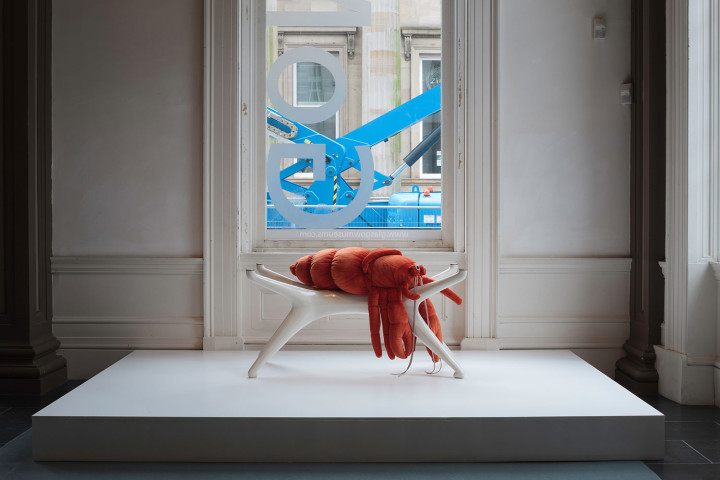 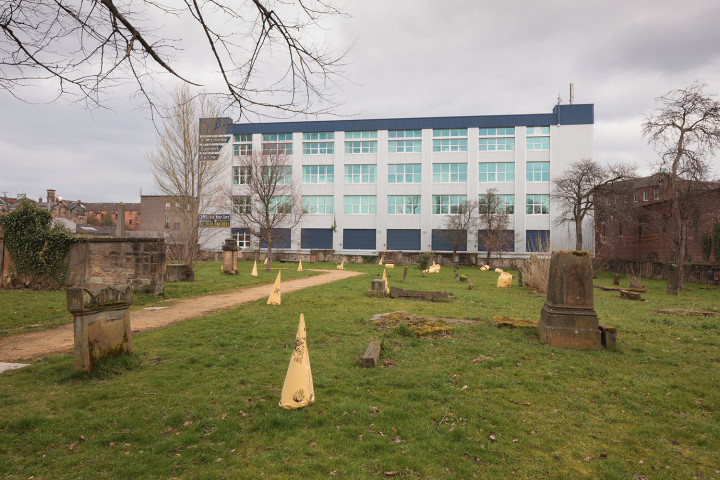 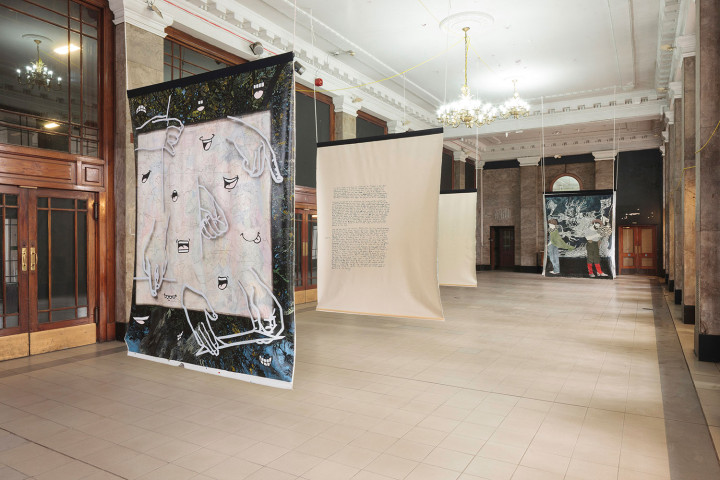 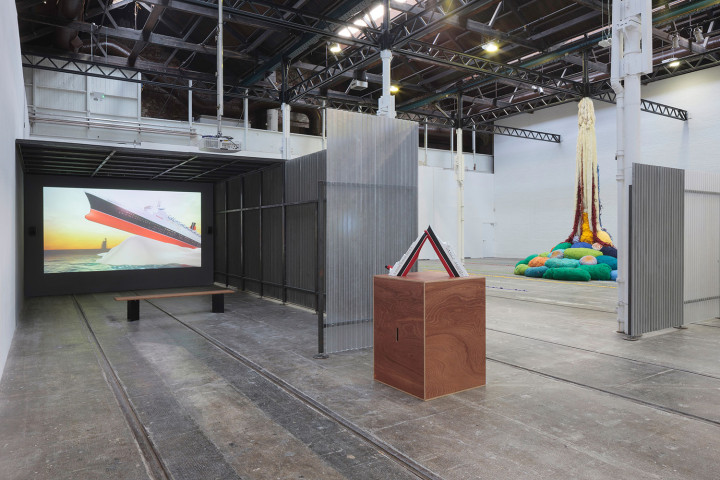 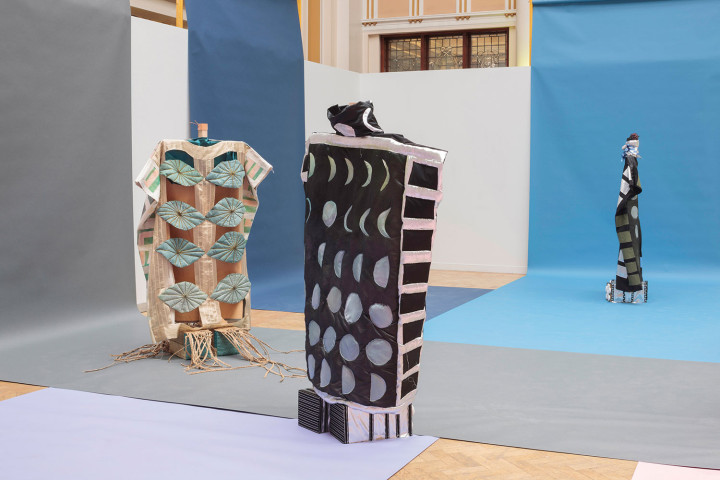 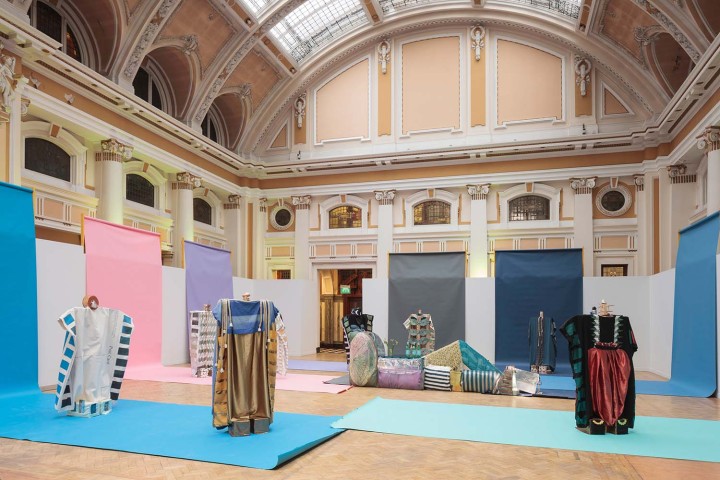 Glasgow, a Macintoshian architectural pearl in the Scottish Lowlands, is a city stippled by its histories of trade and manufacturing — a perfect representation of the effect of a globalized capitalist trade on local communities. The city rose to prominence and wealth in the nineteenth century with the success of its textile production and shipbuilding under the Industrial Revolution, resulting in abundant architectural growth and grid-structured urban planning.

However, with the closure of many factories, the city eventually suffered a decline and widespread poverty, now visible in the impressive amount of empty and repurposed warehouse space around the city. These processes of value-generation, and the central place of labor conditions within these discourses, were explored in the curated program of Glasgow International, the twelve-day biennial arts festival now in its seventh edition.

At the main site, in the vast exhibition spaces of the former tram depot Tramway in the south of the city, a five-person group show explored the histories of Fordist and post-Fordist female labor. Amie Siegel’s documentary video piece Provenance documented with poetic precision the globalization of the furniture trade through the depiction of a factory in Chandigarh, India. This nicely mirrored Mika Rottenberg’s tactile cinematic video pieces in another room, one of which interspersed surrealist Jeunet-and-Caro-like images of a macabre underground human manufacturing line with a pensive but equally forceful depiction of female South Asian rubber plantation workers. It was surprising how successfully the labor histories of Glasgow, so specific in their historical and geopolitical context, could be extended with relative ease to worlds far beyond it, highlighting how the value-generation of art itself operates through post-Fordist chains of global trade.

In recent years, Glasgow International has become a prominent and important destination for the touring art world — particularly with the arrival of curator Sarah McCrory (previously at Frieze Projects). As discussed eagerly in the opening days, many artists and art professionals from London find in Glasgow a more affordable and less market-driven environment to develop their practices. A few galleries, including the five-year-old Koppe Astner, have installed themselves in run-down but picturesque townhouses around the city.

The famous Mackintosh-style art school, long hailed for having produced Scotland’s best artists, remains the center of this scene, even after surviving an extensive fire in 2014 that saw all graduate work and an important architectural cultural heritage go up in flames. Here, Marvin Gaye Chetwynd presented on Thursday night her most recent performance with the collective “ad hoc theater group” MEGA HAMMER (a lot of glow paint, some obscure crooning and a lot of art students in costume). More successful was Cosima Von Bonin’s pleasant impro-gay house vocalization at the opening of her exhibition at the palazzo-like GoMa (Gallery of Modern Art) earlier that evening. Her sculptural work takes up quilting and pairs it with a Pop-art sensibility to discuss the gendered histories of popular culture and craft — specifically Bavarian stuffed sea animals riding phallic rockets and occupying voguing ballrooms. Upstairs, Tessa Lynch proposed a less masculinist version of psychogeography with her sculptural abstractions of objects encountered on her daily commute.

Beyond the curated program, there were some really fantastic exhibitions across the city that further cemented Glasgow’s institutional significance. At the Center for Contemporary Art, a large exhibition showed recent work by Finnish artist Pilvi Takala, who immerses her performance practice so deeply in the banality of everyday life that it almost vanishes. Her most famous piece, The Real Snow White, captures on hidden camera the escalation of events as Takala, dressed in an impeccable Snow White costume, is denied entrance to Disneyland Paris due to “issues of authenticity.” As a growing hoard of amazed children flock around the princess/artist, and a security guard tries to explain that “the real Snow White is already inside,” the ubiquitous but invisible codes of human conduct are exposed. However, in Broad Sense, wherein Takala navigates the strict security measures of the European Parliament building, the artist poignantly addresses larger themes of accessibility, institutionality and the aesthetics of modern democracy.

In the Montmartre-like quarter at the top of Kelvingrove Park, the nonprofit space The Common Guild showed the work of Lebanese artist Akram Zaatari, who pairs sexual desire with archive theory. Zaatari personifies the vast virtual archive of Internet pornography through delicate drawings of Xtube video stills — and in another piece, inversely tells the story of a personal love affair through a meticulous process of self-documentation.

From derelict warehouse spaces to fully operational public libraries, Glasgow International engages the city on its own idiosyncratic terms, imaginatively responding to the thematics and histories embedded there.