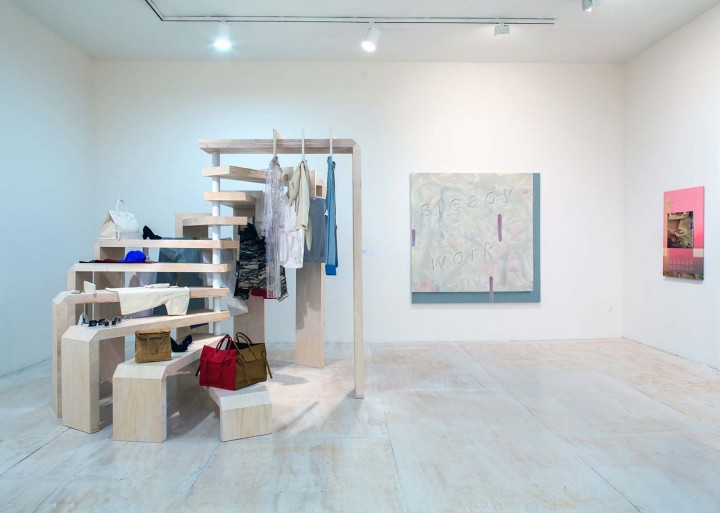 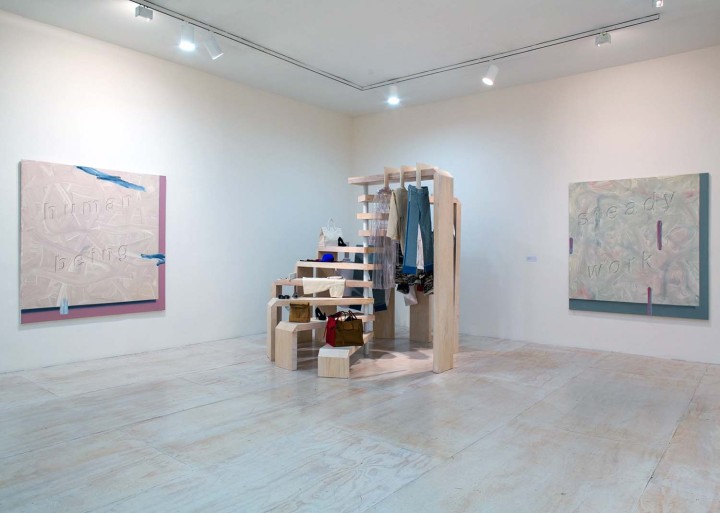 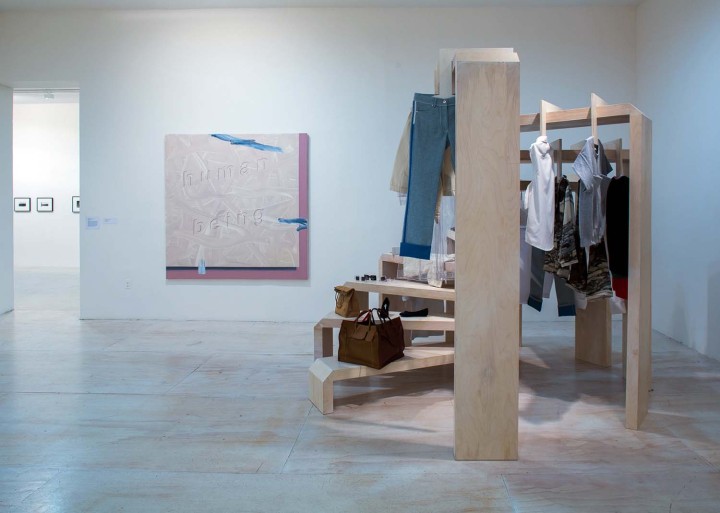 Slow and Steady Wins the Race, the conceptual clothing and accessory line that reexamines “classics,” was created by designer Mary Ping in 2002. The label’s catalogue now includes over 350 items and continues to grow outside of fashion’s traditional seasonal structure.

Ping frequently collaborates with artists, graphic designers and architects, while contributing to and curating significant exhibitions. Artist Becca Albee met up with Ping shortly after she completed SSWTR’s installation for “Greater New York” 2015 at MoMA PS1.

Can you describe your installation for “Greater New York”?

It’s called Living Archive, and it’s one representation of each of the fifteen signature collections from SSWTR. The word “living” is important, because everything we’ve designed is still active and in rotation. There’s the clear trench coat from the clear collection, the double-heel pump from the original shoe collection, the four-sided rectangular bag, the pearl T-shirt, the marble pajamas. We included jeans from Denim, which are new. It’s a good representation of everything we’ve designed since 2002.

Those pieces are presented on a structure that was created with Bureau V, with whom you’ve collaborated before. How did you determine the ascending form?

Working with Bureau V made sense because they’ve done all the past collaborative architectural designs for SSWTR. For this show, I always thought about a vertical orientation spiraling out from a central point. The closest inspiration were these Achille Castiglioni shelving units that nest and fan out. They resemble an ascending spiral staircase that widens at the top.

You mentioned how you didn’t want the installation to look like retail, and that at the same time this was being installed you were doing sales in a showroom at Paris Fashion Week. I’m curious about how you distinguish those two things, especially at this moment.

For pragmatic reasons, it becomes compartmentalized, but it’s also the way my brain works. SSWTR has always operated in a Venn diagram of various industries. As a business, it has to exist within the fashion world. With our buyers, I have to remember, “Oh, how does this look in a retail space? How would this be merchandise?” The words are all different.

At the same time, it’s our signature and core, our identity. We are known for reformatting the existing fashion space and system, and that has started making everything we do a little bit more interesting outside of just fashion.

I first saw your bags when Ooga Booga opened in Los Angeles, and I was struck with how a useable object could embody a critique but also a celebration of sorts. Your first garment collection, Seams, was like that too. It made me think of material and labor, but the pieces were also stunning.

The Seams collection was about how garments are constructed. When you make clothing, you begin with a toile in this unbleached cotton, and that becomes your maquette. It just made sense. The first collection should be a foundation. Now it has become signature. While Margiela has blank white, we have the unbleached natural.

Also noticeable was the price. I’ll be somewhere and notice more than one person wearing SSWTR. I think that’s partly because it’s relatively affordable. At one point you had a flat price of $100.

Yes, that was a self-imposed limitation/test. When I started the line, I was also looking at the key characteristics of fashion as a business: price point, distribution, availability, accessibility; therefore, a single marker, a single price? It could become a symbol of exchange. I give you $100, I get this. Simple. That alone was a commentary on how commerce works.

I love the idea that good design can be universal. The whole goal is to make something affordable, but still aesthetically interesting. Romantically speaking, it just makes the world better.

Those were a lot of touchstones in how we design as a studio. I try to impart to everyone that good design can elicit a response that’s universal, but can still feel very personal and unique. How many people own Converse sneakers, and why? My dad had Converse in 1940s China. That design is brilliant. For SSWTR, I’d rather spend more time on one thing and know that it’s going to last versus just spitting out three hundred different options.

This interview couldn’t have happened in 2003, because you used to be anonymous. How have you rectified that, or what has the shift been for you over the past decade or so?

For me, anonymity was just a way to make sure the audience focused on the work. For example, with one of my heroes, Martin Margiela, you didn’t know what he looked like, and there was a lot of control involved in keeping it that way. Having a representation of what the work could be minus the cult of person behind it was most important.

Before studying fashion in London you studied art at Vassar College, and you have credited your teachers there as having a large influence on you. Who did you study with, and how did they inform what you do?

I have a lot of gratitude for my professors, not just in studio art but also in the art history department. Harry Roseman was my advisor. Judy Linn and Richard Bosman were also my professors. Joyce Robins, who’s also included in “Greater New York,” was my sculpture professor for a few semesters while Harry was on sabbatical. Sometimes there are classes you really struggle through — the ones you don’t get the A in, where it’s like you’re not speaking the same language as the person you’re interfacing with — but I’m a strong believer that those are the moments when you really grow. Joyce definitely challenged me, and I had to explain the meaning and the reasons behind the work that I did, or what angle I was coming from, and why I was using that approach. That’s when everything expands.

It feels like a weird time warp for sure, being in this show with Joyce. It has taken me all these years to mature and understand exactly what she was getting at. I just hope maybe she’s proud. Harry taught me to always ask questions that are smarter than you, and then find the answers to them. I’m always more curious about questions I don’t know the answers to.