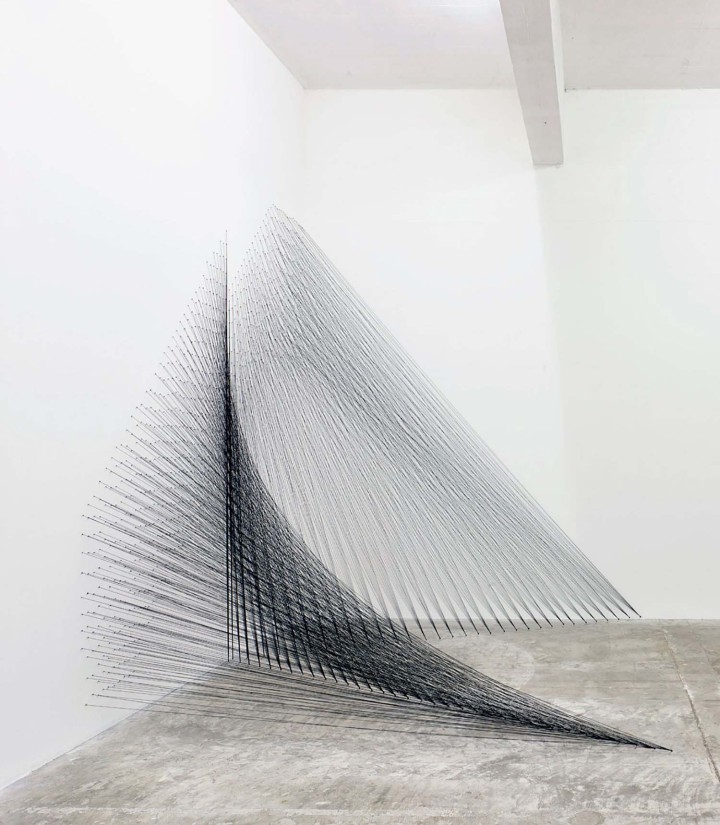 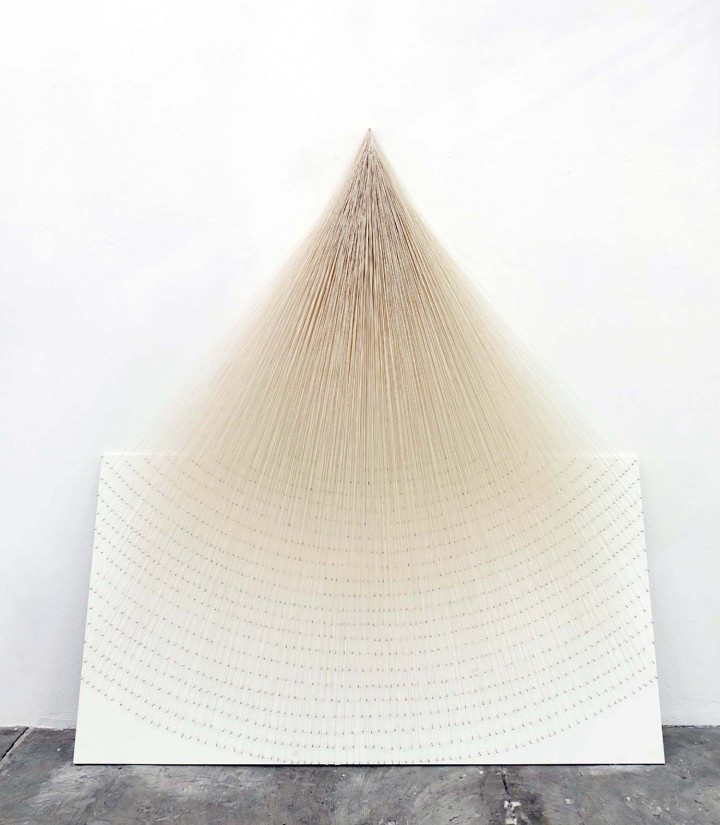 Billed as a “historical” retrospective, most of the iconic works on view have been recreated for the first time since the 1970s. Working from photographic archives, long-destroyed or lost works have been brought back to life by Swiss assistants under the careful oversight of the artist herself.

A former assistant of Sol LeWitt for over three decades, Myamoto was directly involved in the production of LeWitt’s first wall drawings and open-cube structures. Her string constructions, representing the core of her practice, suggest LeWitt wall drawings that have left the two-dimensional surface of the wall. Deployed into space, the lengths of string suggest volumetric forms that feel almost tangible. In a sense, Miyamoto delicately unfolds the unrealized three-dimensional potential implicit in LeWitt’s drawings.

It is notable that the first appearance of Miyamoto’s constructions in the 1970s coincided with the development of string theory and the nascent stages of the digital age of immaterial production. Miyamoto’s ephemeral occupations of space help viewers become aware of a new layer of material reality. Like a 3-D projection or an Agnes Martin painting, her string constructions are semi-immersive experiences, activated by our movement within the space. The short-lived installations adapt like air to their environments, invoking the expanded field that Rosalind Krauss theorized.

Far from LeWitt’s sleek, industrial look, Miyamoto’s use of raw string, charcoal and spray paint invests the minimal grid with a sense of imprecision, fragility and uncertainty. This significant alteration could be seen as an ironic attack on the confident, masculine sensibility associated with minimalism, replacing it with a more vulnerable, tactile essence. Other women artists such as Emma Kunz, Channa Horwitz, Irma Blank and Eliane Radigue come to mind — all artists for whom the body and the self are indissociable from the work.

By 1980, Miyamoto’s practice had shifted toward performance and the production of ritualistic objects activated by the presence of the body. Those objects reveal another “cycle” in the artist’s output. Often made of natural materials such as leaves, paper or rope, their production coincided with the birth of her son.

Miyamoto’s underappreciated body of work remains difficult to classify. The power of these protean forms to entangle the viewer, however, is undeniable.