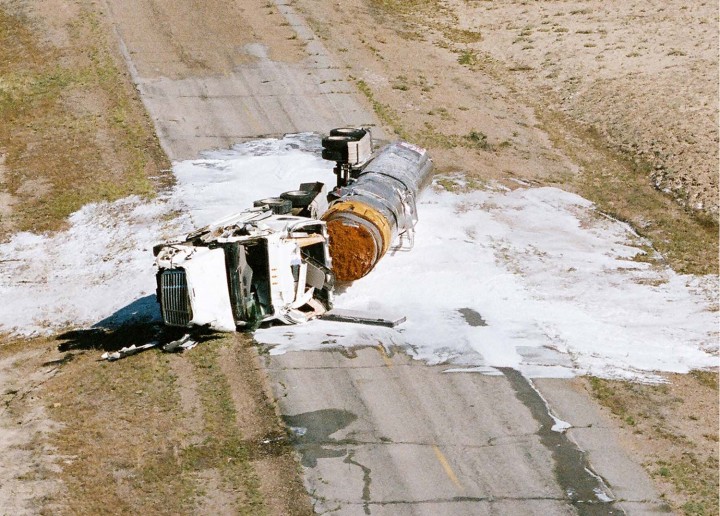 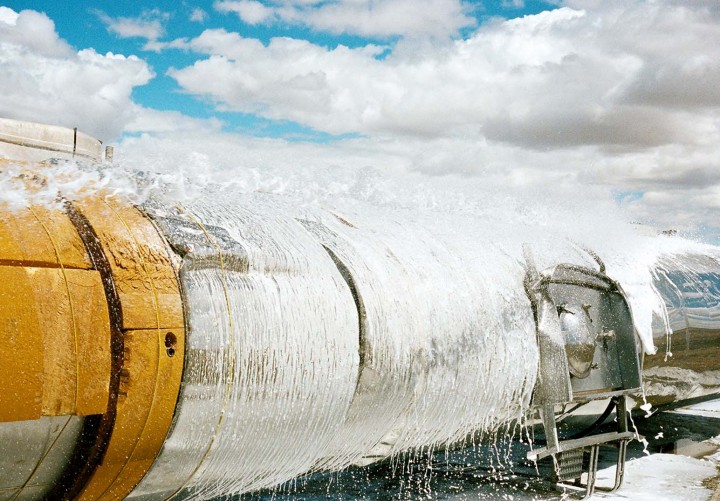 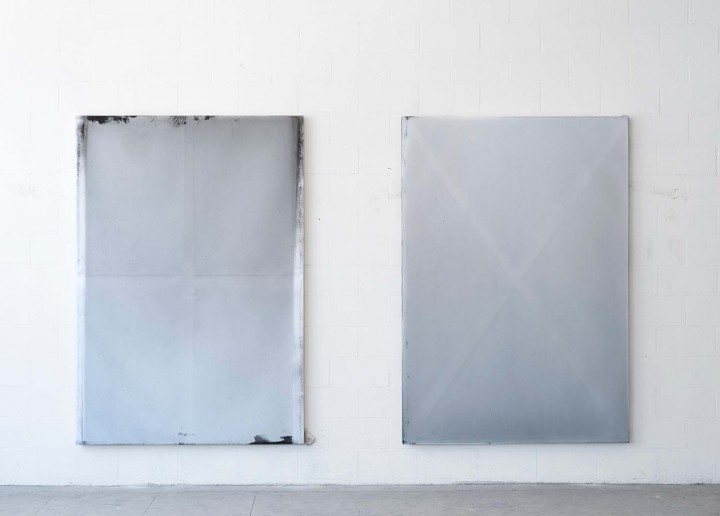 Born in Colorado in 1979, artist Jeremy Everett lived in Paris and recently moved to Los Angeles. Darren Flook talks with him about the greatest American monuments, Land Art and construction sites.

Overturned trucks spilling milk across a highway, smoke blown onto a canvas by the wind, soil-eroded photographs of cheer leaders… There is a love of chance here, and also a feeling for American imagery, decay and impermanence. I wonder where this comes from in your practice? Can you fill me in a little on the connecting threads of your interests? What are the central motivating drives of this character called Jeremy Everett?

The greatest American monument is the highway; to wreck a truck full of milk is a very specific and important gesture that was absolutely necessary to me. While growing up in the US I was surrounded by subjects like the American cheerleader; I buried these photographs as a way of finding visual meaning, vital meaning. The paintings made with colored smoke began with chance but eventually developed into something more factual, revealing the painting structure as surface and as something to see. The painting became a photocopy of itself. All of the work is connected by a visual truth or fact, a reduction towards the absolute.

There seems to be a relationship to action. To overturn a truck — the act of finding it, filling it with milk, getting someone to flip the thing and then getting in a helicopter to film the result. The same with the smoke paintings — you build a box of canvases, let off the smoke bomb… All are actions, or at least active approaches to image making, which is a roundabout way of asking if there is a conversation with Land Art and monumental sculpture?

It’s important these images have the visual charge of an action. I want to perform this work whether it’s monumental or unmonumental and get the visual results through direct production. Michael Heizer’s Double Negative had a big influence on me early on and also a lot of Smithson’s temporary works that only exist now through photographs. Beyond using similar methods of documentation, I don’t feel my work has a connection to Land Art. I am producing works that participate inside of life, not isolated outside of it. I closed the highway so I could wreck the truck. I wanted the sculpture to temporarily stop the system.

I never thought of the closing of the highway as a part of the work. Do you think of the disruption caused by the smoke works in a similar vein?

Initially I was imagining a disruption in the city, like a badly timed firework, leaving a cloud of red pigment in the sky. I did my first smoke piece on a rooftop in the center of Paris.  It is a very uniform, horizontal city, so you could see the color hanging just above the buildings for about ten minutes. I asked a photographer to document the duration of the piece from the roof of the Pompidou. After setting it off things turned hectic quickly. The neighbors called the cops and I ended up running through the streets to get away just in time before getting caught.

The next development of these works is using the smoke pigment to expose pieces of architecture, leaving a monochromatic photocopy of the exhibition space.  With the smoke works it’s more interesting if the disruption happens inside of a gallery.

I also used these ideas of disruption and intervention in my works in situ. One example was when I found a construction site in south of France with a front end loader completely stranded in a body of water. It is the perfect sculpture. I convinced them to stop working for the rest of the day, so I could photograph it.

I’d like to ask you about location. You now live and work in LA — a city very different from Paris and one currently very much in the art press. Do you think that move has affected your work?

Yes, there is a freedom in LA that has changed my work — the availability of material and an opportunity to work at a larger scale that I didn’t have in New York or Paris. The foundation of the city is Hollywood, and all of the production material, printers, fabricators, etc., can be used for art making. Visually the light is unrelenting and incredible. I am always surrounded by a questionable reality. My studio is located on Broadway downtown, above Elvira’s Wedding Chapel. On one side is the building where Blade Runner was filmed, and on the other side is the shop where OJ Simpson bought the knife that was used in the murder of Nicole Brown Simpson.

As I leave the conversation, I’m left with a sense of Everett as a kind of filmmaker — not in the literal sense of shooting films, but as Hitchcock said: “Film is collage.” It’s this sense of image following image, object from action and image again that stays with me. That and the fact/fiction crossover that is Los Angeles.