The typical modern soul acts on the world at least partly via technological prostheses, whether it’s to click on political petitions, order goods and services, or broadcast emoji-strewn messages capable of administering small bursts of joy, love, anger and pain. Given that those devices increasingly feign intelligence or consciousness, while we, all-too human, falter in the face of imagining the networkverse, it’s perhaps not a surprise to see recent recourses to mythologies of enchantment, spirituality and animism, which increasingly cling to our perceptions of devices and data, spangling our perceptions of the streams of information in which we bathe our minds. Such tendencies form the premise for “Phantom Limbs,” a group exhibition at London’s Pilar Corrias Gallery.

In Cécile B. Evans’s 3-D video work The Brightness (2013), the artist is seen interviewing a phantom limb specialist who apparently shares her name, before drifting off into a space of dark, ecstatic reverie in which a chorus line of digitally animated teeth dance Busby Berkeley-style routines to a soaring, twinkly soundtrack. The two Céciles reappear, moving towards us in a pink cloudscape, and performing a routine of symbolic hand gestures, as though communicating to us from another plane of existence. “I was real then,” says the voiceover, “and now I am the brightness you cannot explain.”

Sculptures appear to display plant or insect-like forms of consciousness in the work of a handful of New York artists: Antoine Catala’s toy-sized sculptural emoticons putter around the space on wheels like friendly, Brio-train drones, suggesting the speed with which languages and signs can appear to gather autonomous momentum in a network. The ceramic flanks that are the key components of Alisa Baremboym’s Leakage Industries: Clear Conduit (2012) resemble flesh or silicone being grown for some posthuman purpose, porously suck in the gelled emollient on which they are displayed, whilst tail-like USB cable attachments suggest an analogous form of data absorption.

In Rachel Rose’s video installation Palisades in Palisades (2014), centred around footage of a young woman on a cliffside park in New Jersey, the prosthesis in question is a rigged camera which swoops back and forward between dramatic long shots and close-ups. One minute we see the subject from her from a distance, and in the next we are rushing towards her and closely examining the skin on her décolletage or the clumps of her blue mascara on her eyes. As with many of the works in “Phantom Limbs” here a symbiotic relationship with apparatus, media and data, is presented as one that shutters lightning-fast between states of ecstasy and ennui. 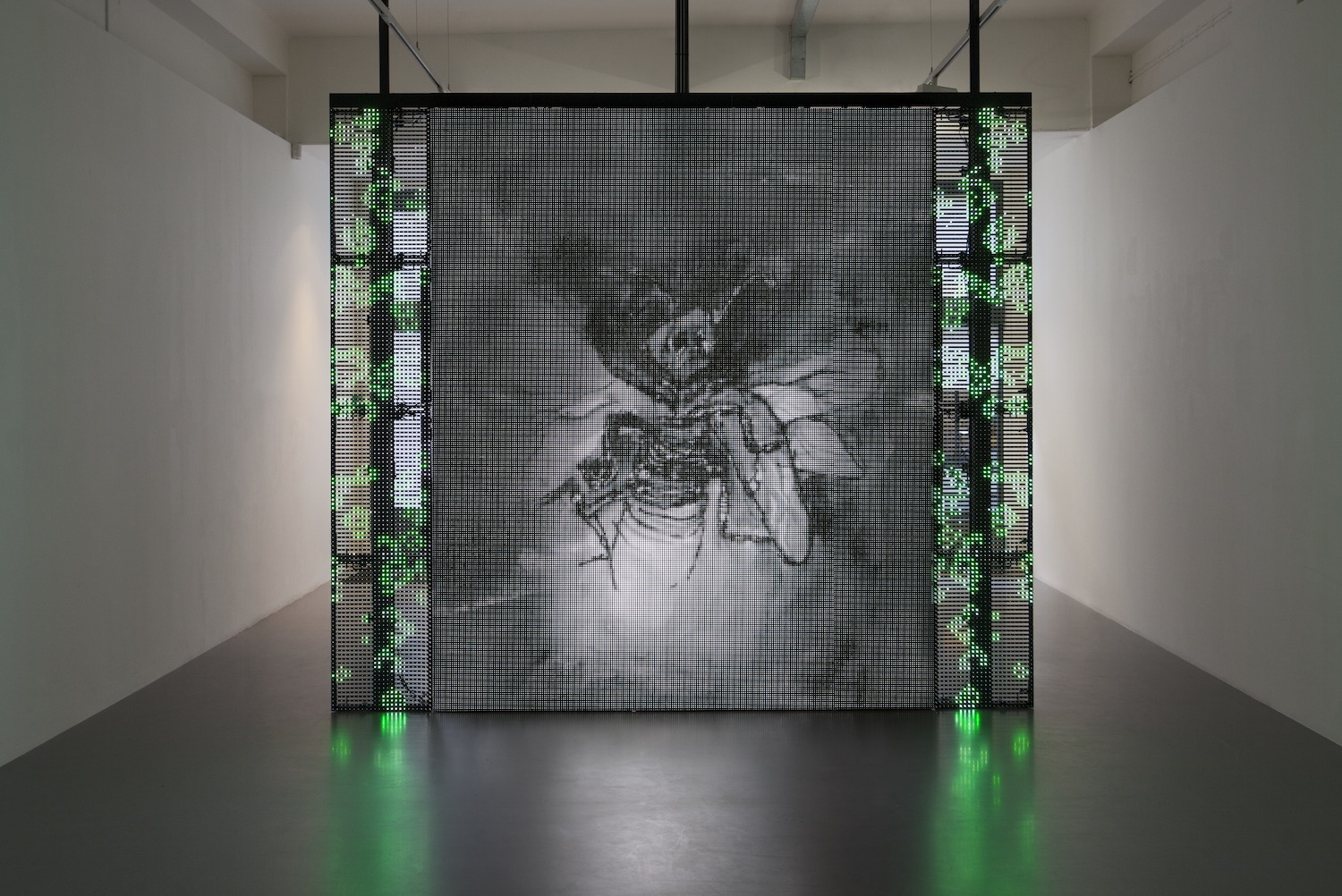 Upon entering the Pilar Corrias space in London, our senses sharpen. A dense intersection of sounds and intermittent light pervades…