Zhang Ding (b. 1980, China) is essentially an anarchist. The underlying impulse behind his recent actions has been to carve out a space of lawlessness where the artist is no longer in control of the proceedings. This marks a significant break with the more traditional notion of the artist as the god-like master of his own universe, pulling all the strings behind some decorous curtain. With Zhang Ding’s work, it is impossible to predict what will happen, because the artist himself does not know. This not-knowing become a fundamental aspect, not only of his process, but ultimately of the worlds he creates — worlds that comment, in varying degrees of subtlety, on the world inhabited by human society.

Opening (2011) was the re-creation of a nightclub interior in an art space. Zhang stated in an interview at the time that he was not interested in positing it as an artwork: rather, he preferred people think of it as an actual party. So: disco lights, a bar, DJs, a dance floor. At the same time, the title implies a dig at that most common event in the art world, one that occurs week after week and, in some cities, night after night: the art opening. Which is, as art-world insiders are apt to complain, really not about the artwork or the artists, but a mere opportunity to socialize: it’s a party. In Opening, there was no art beyond the opening. It is not that Zhang was literalizing the idea that the artwork be done away with altogether in order to enunciate what the art opening is really meant to be about. Zhang was rather positing a form of art that, in its resistance to stasis, favors the Dionysian and Apollonian in equal measure. Art, not as any particular object, but as a drunken, orgiastic, heightened sense of being; that state becomes the artwork — that is, you, and all that surrounds you, at that moment, if you are lucky enough to attend and are willing to submit to the experience in totality.

Zhang furthered this idea of immersion-as-critical-art-practice the following year, with his project at ShanghArt Gallery, “Buddha Jumps Over the Wall,” which was ostensibly a feast, but arguably also a piss-take on China’s newly emergent class of nouveaux riche. The apocryphal legend behind the name of the famous dish Buddha Jumps Over the Wall — which is fabulously complicated and exists in numerous variations, but typically consists of no less than six different kinds of meat and fish and requires several days of preparation — was that its savory scent was so intoxicating it caused a Buddhist monk to hop over a wall and partake in the feast, relinquishing his traditional vow of vegetarianism. Zhang Ding hired chefs to prepare his own version of the dish, which he then served up to the invited audience in one of ShanghArt’s spaces, which had been remodeled to resemble the typically kitsch interior of one of China’s newest banquet halls catering to an upmarket crowd. At the entrance, guests were greeted with the projection of a video featuring white plaster casts of each of the six animals contained in the dish, each of which were sequentially exploded in a sea of blood.

“Buddha Jumps Over the Wall” is a good example of the critique-via-immersion that lies at the heart of Zhang’s practice. Rather than merely railing against the decadence of the zeitgeist, Zhang invited spectators to partake. And in partaking with the awareness of the distant remove — you are in an art gallery, not the traditional banquet hall — it’s possible that a new self-consciousness may emerge.

Dialectics abound in Zhang’s work. Some of these are more traditional, for example self vs. society, while others are quite novel in their positioning. For Enter the Dragon (2015), his project at the ICA in London, Zhang staged a face-off between two pop cultural exports of the East and West: martial arts versus rock ‘n’ roll, respectively. The title of the project refers to the eponymous Bruce Lee film, which was meant to serve as a vehicle for introducing many of the key philosophical concepts animating his martial arts practice, adapted from Taoism and Buddhism, to a Western audience. Indeed, numerous parallels spiral out of this East-meets-West dissolutive pairing in Zhang’s performative installation.

While the anarchist spirit might be what inspires Zhang most about martial arts, a similar spirit animates rock ‘n’ roll. If martial arts are the biggest pop cultural export of the East, then the same could be said for rock music as a Western export. And while both might be anarchistic in spirit, both martial arts and rock music necessarily operate in obeisance to their own internal formal laws. Those laws, importantly, come from within the respective disciplines — they aren’t exerted by some external power masquerading as an authority. This is why both rock music and martial arts fighting initially appear as lawless: they aren’t governed. Rather, they are regulated by an internal discipline, and only the practitioner may come to understand and revise those regulations.

Enter the Dragon took place over thirteen nights in October 2015. Upon entering the theater at the ICA for the first time, the initial impression was that of a sci-fi discotheque. Two stages on either side of the room were mostly obscured by rows of spinning, body-sized mirrors. Each night, a different pairing of musical acts, all of them based in or around London and selected by Zhang Ding in collaboration with NTS Radio, would tag-team perform and feed into one another, leading toward a climax wherein a joint improvisation would conclude the night’s performance. The performances were enhanced by a team of live sound and lighting engineers who responded to and heightened the intensity of each live experience.

Unfortunately I was only able to visit the installation for two of the performances, but both were wildly disparate enough to give me a firm sense of Enter the Dragon’s inherent and at times reckless unpredictability. The first saw a doom metal band, Casual Sect, paired against a two-DJ techno outfit, Chrononautz. The combination proved to be a winning one, with the crowd rocking out, dancing the night away; in this respect, it wasn’t all that different from a traditional show at a club or live-music venue, except for the trippy effects engendered by the spinning mirrors and lighting.

The vibe was completely different on the second night I attended, with the two ambient sound artists (rosen and Rob Lye) engendering a more meditative, atmospheric environment. Throughout most of the performance, the audience intuitively sat on the floor and allowed themselves to space out. I did the same, in front of the stage, losing myself in the timeless, extrasensory continuum invoked by the evening’s audio-visual spectacle. At one point, staring into the spinning mirrors, I fell into a sort of trance. I was reminded of Lee’s quote about becoming nothing, attaining a state of Zen. But then I was also reminded of those prayer wheels so prevalent in Tibetan Buddhist temples. On them are inscribed mantras that are traditionally chanted. Spinning those wheels is meant to have the same effect as chanting them: bringing good karma and staving off the bad. In today’s secular society, the self and its multiple projective reflections have come to serve as the vacuous replacement for spirituality. Here, we are justifiably denied the seeking for those reflections we have come to crave.

Both martial arts and rock music — ostensibly the main referents in Zhang Ding’s piece — are as absent as they are present in the installation. Rock music no longer enjoys its hegemonic position in popular culture, having splintered off into numberless subgenres of “popular” and not-widely-popular twenty-first-century music. Thus, Zhang Ding’s choice of programming in the installation extended both to artists like Casual Sect and Bo Ningen, using the traditional rock band structure, to DJs and sound artists working in techno and other forms of electronic dance music, as well as more ambient and experimental soundscapists. And as for martial arts, besides the title and the spinning mirrors referencing the final scene in Lee’s film, no actual combat was engaged in, save for the rivalry between the musicians on either side of the room.

Presence via absence, negation. Here we can see a clear manifestation of Bruce Lee’s fighting philosophy, which he offers early on in the film. Lee plays the role of both teacher and student in Enter the Dragon; in the guise of teacher, he instructs his student, “Don’t think. Feel.” As student, he tells his teacher: “Destroy the image and you will break the enemy,” the enemy being nothing beyond the images and illusions he projects.

Ultimately, the enemy lies within. That is, one’s enemy in the external world is but a manifestation of an inner violence that must be quelled. That is what life is all about: the annihilation of borders and the fight to unify all opposites into a single composite whole.

Although Zhang’s environments are intentionally positioned at a distant remove from the social fabric, they nonetheless constantly refer to it. This is not merely a means of critique, but subversion via embodiment. And embedded within every subversive intention is the possibility, the will, to destroy. To go inside something — whether that something is an object or a situation — is to infest it like a parasite. The parasite doesn’t just spread disease; it imbues its host body with new life, even if the intentionality of that life might be at odds with that of the host body. Like a good parasite, Zhang Ding intentionally, if slyly, tears apart certain worlds in order to reveal the corrupt weavings of their innards. That may sound more negative than it actually is. For Zhang Ding’s projects involve a great deal of fun for spectators, who, parasite-like, always become participants, contributing to the work’s creation through their joyfully infestive experience of it.

During the fall of 2015, Shanghai’s Power Station of Art hosted an exhibition titled “Calligraphic Time and Space: Abstract Art…

In recent years, Shanghai, China’s financial and economic heart, has successfully challenged Beijing as the sole center of contemporary art…

“Divine Ruse,” Jin Shan’s latest solo exhibition at BANK, in Shanghai, is a product of speculation and resistance. The exhibition… 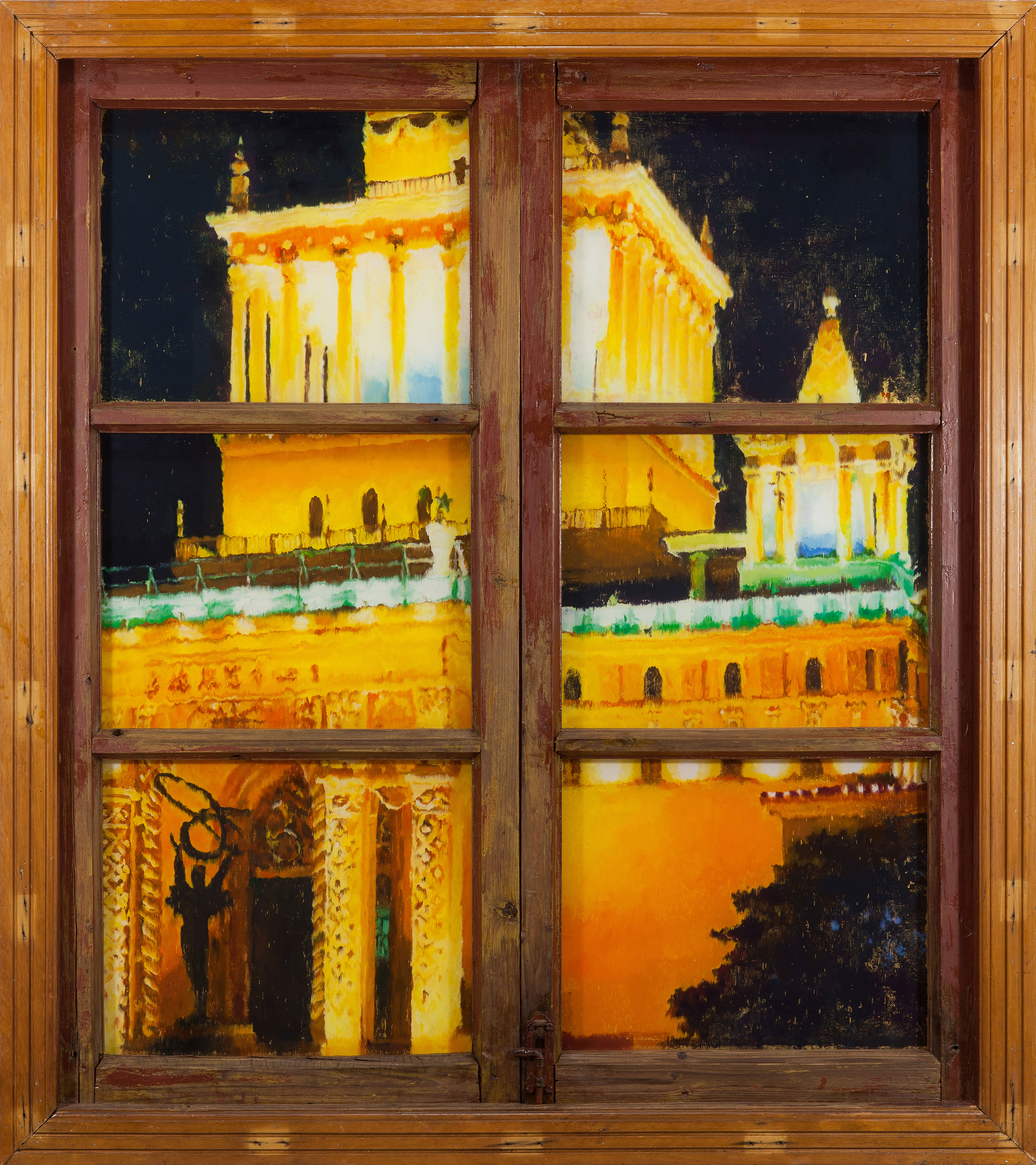