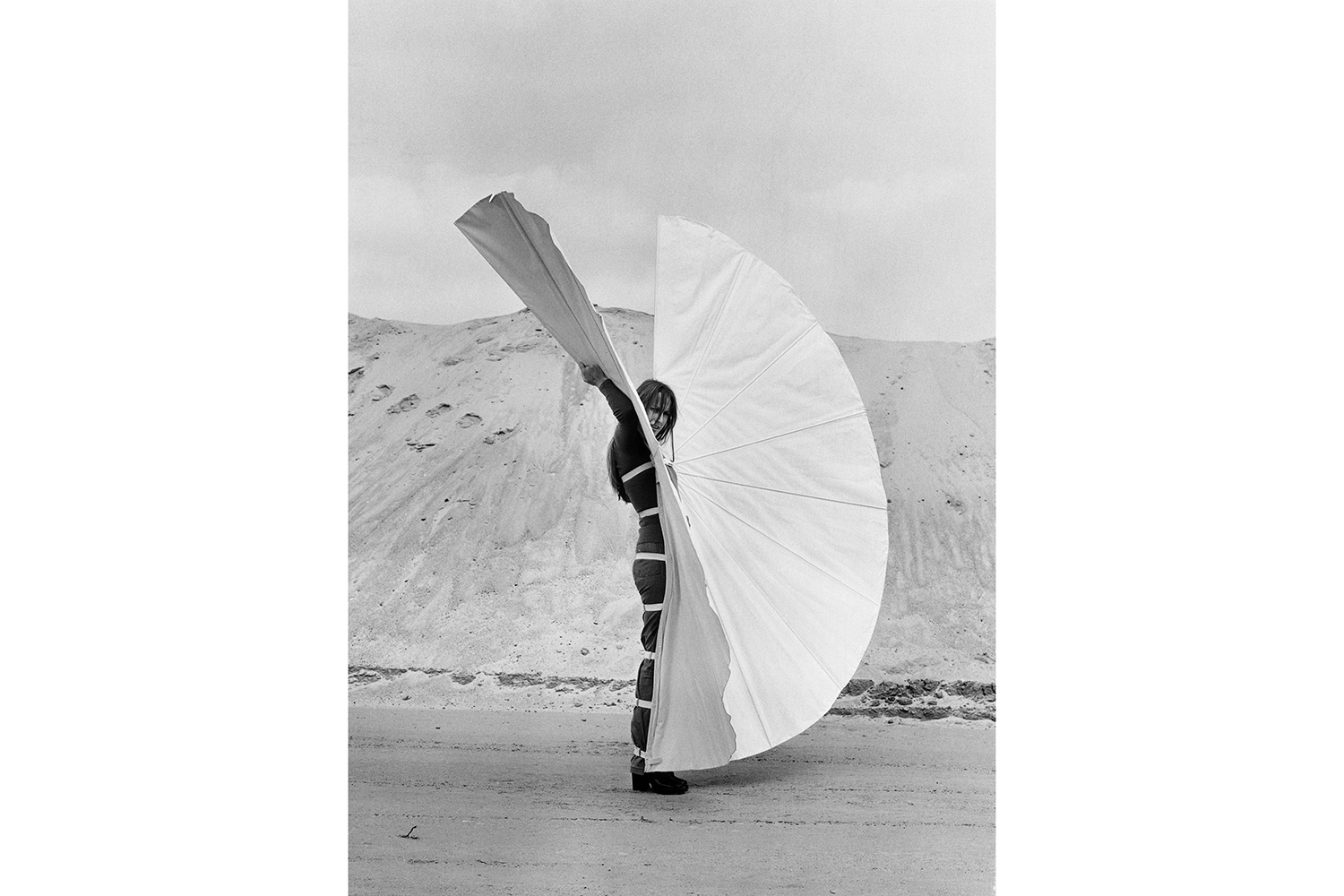 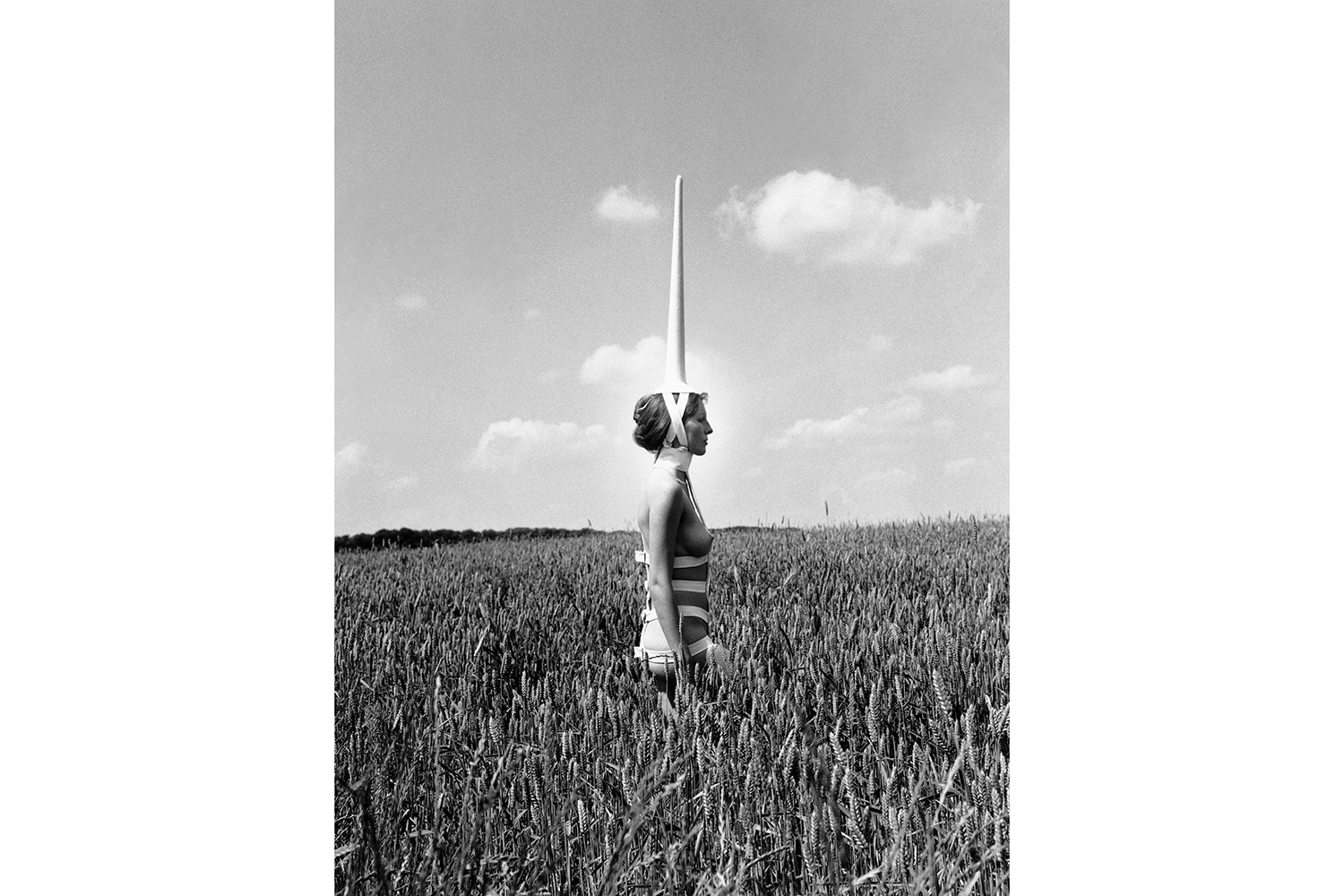 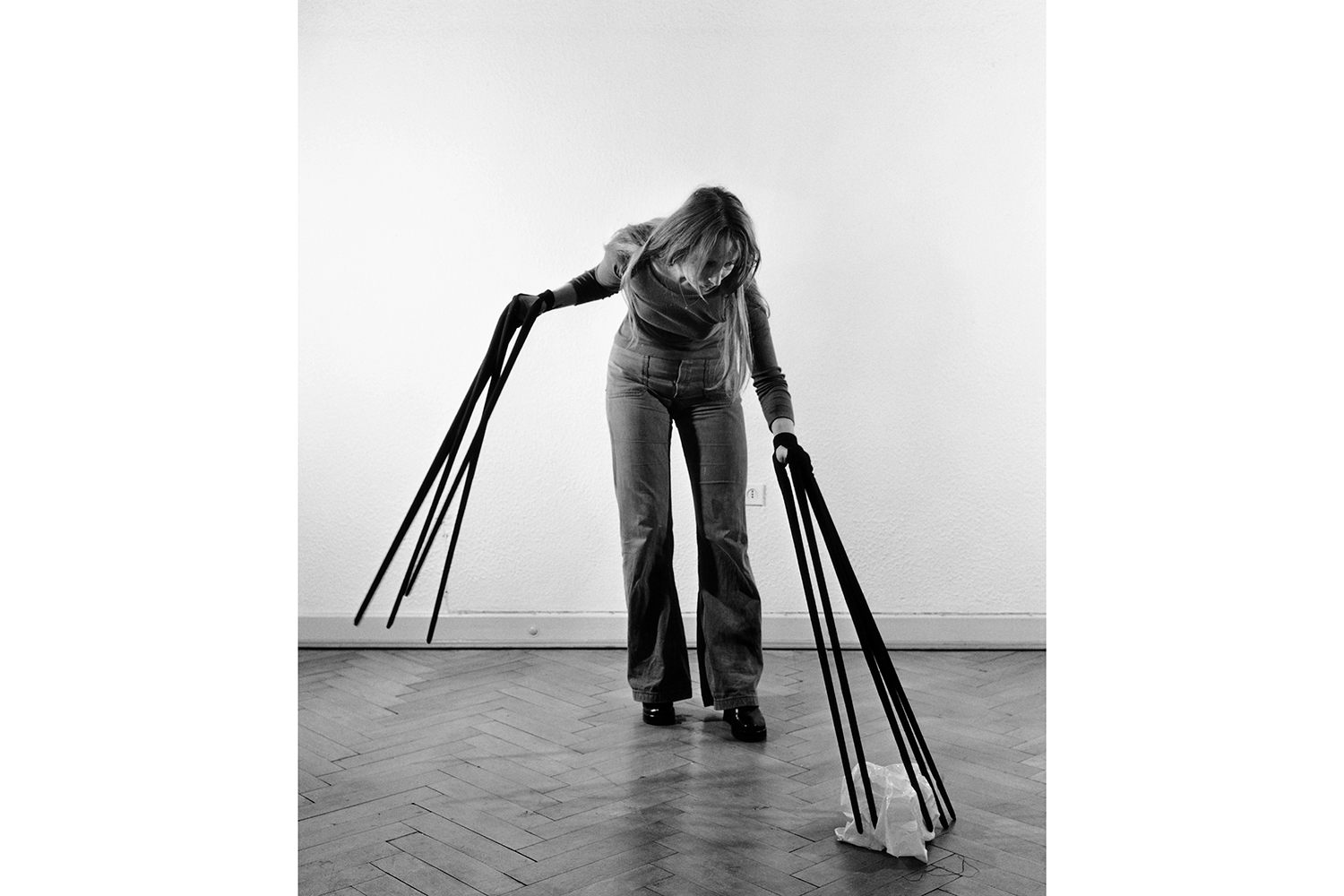 Between 1968 and 1972, German artist Rebecca Horn created a series of performances titled “Personal Art.” Not unlike Joseph Beuys, an artist with whom she readily claims affinity, Horn ascribes the genesis of this work to a single near-death experience. As a young sculptor in the 1960s, Horn, like many artists of her generation, worked with fiberglass and polyester. Unaware of the toxicity of these materials, the artist suffered severe lung damage followed by a long period of convalescence. Limited to drawing in her hospital bed, Horn sketched images of the human body and designs for wearable sculptures, or “body extensions.” She then sewed and constructed these, tailoring them to exactly fit her measurements and those of her friends and collaborators. Made of cloth, wood, bandages, belts, feathers, and found objects, Horn’s masks and extensions contain, constrain, and/or elongate the bodies of their wearers. To this day, Horn can be said to continually build upon this oeuvre. She is known to return to earlier objects and performances by citing or even reworking them. “My works are stations in a transformative process,” she has said. A “development that is never really finished.”1
The earliest, fleeting performances of Horn’s “Personal Art” were captured in drawings, notes, and several photographic stills. In 1970 Horn first made use of film with her twelve-minute Unicorn, which has since been grouped by the artist as part of “Performances II,” which date from 1970 to 1973.2 In these formative films, the camera is static or moves in long, slow pans. Featured is typically a single performer wearing an encumbering prosthesis and moving through a landscape. In Unicorn, for example, a nude young woman strapped into a fitted construction, ending in a large horn atop her head, walks along a shaded path and through an open field. In Head Extension (1972) — made on the occasion of Horn’s participation in documenta 5 — a man requires the assistance of four additional performers in order to keep upright an even larger horn, a cone-shaped prosthesis more than twice the height of his own body, allowing him to move slowly forward. Horn’s body extensions thereby take on an oversize role not just in relationship to the wearer but as protagonists in the performance and resulting film.
While often unwieldy (in the case of Head Extension even bordering on the absurd), Horn’s body extensions can imply a new and even more expansive sensory experience. In the film Finger Gloves (1972), the earliest related drawings of which date to 1968–69, Horn moves slowly about an exterior space, exploring it — and a nude male body — with long black finger extensions. In addition to the film, Horn posed for a photograph with the gloves in an interior space. Here the male body is replaced by a crumpled piece of paper, which the artist bends toward in an attempt to grasp it. In the film Pencil Mask (1972), the artist is seen again, this time up close, her face bound in fabric and pencils. She moves her head repetitively, even robotically, back and forth against a wall. Rather than emphasizing activities associated with one’s face (e.g., speaking or eating), this extension allows for a body part not associated with drawing to make vigorous, gestural marks. As a whole, “Performances II” are a meditation on the body (or bodies) in space — moving, touching, groping space itself (vertical and horizontal, interior and exterior) — and the relationship between the two. In the few films where protagonists interact, only one person wears the “instrument,” as Horn has also called it, and yet seeks (nonverbal) communication or contact with others. The prominence of masks and feathers, as also seen in Cockatoo Mask (1973) or Feather Finger (1972), for example, also draws on a rich surrealist tradition suggesting erotic desire, while deliberately challenging social taboos and eliding traditional notions of gender. 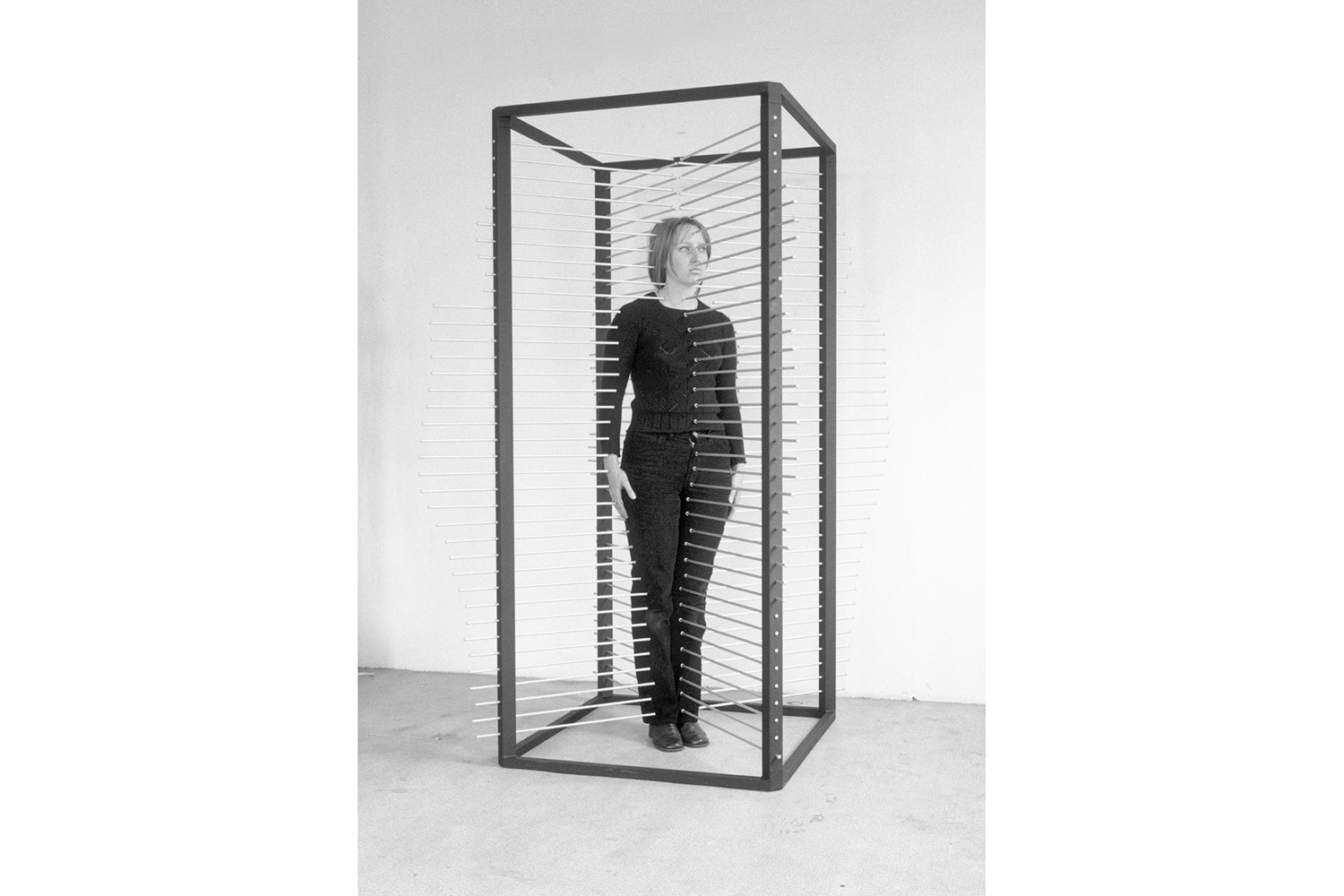 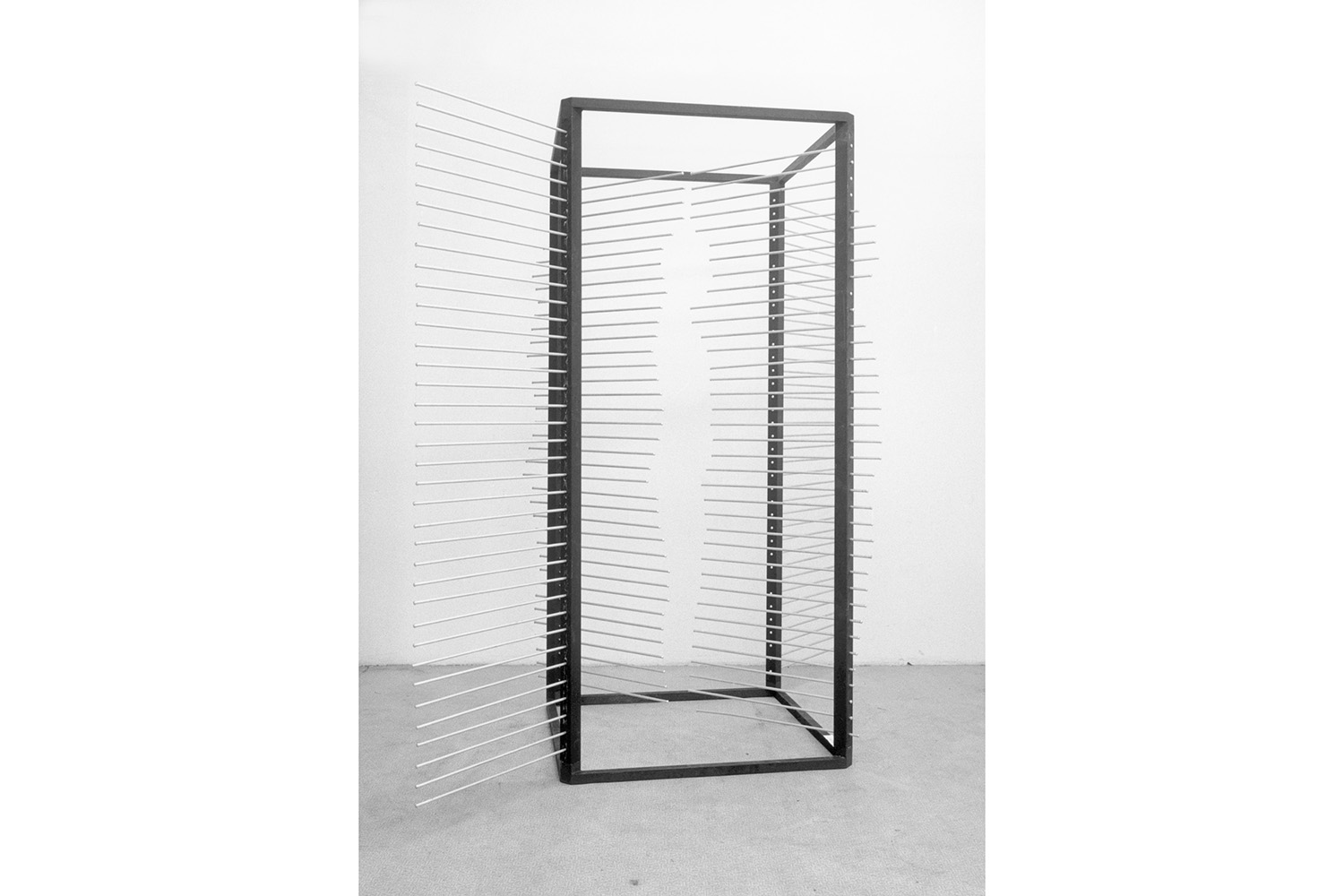 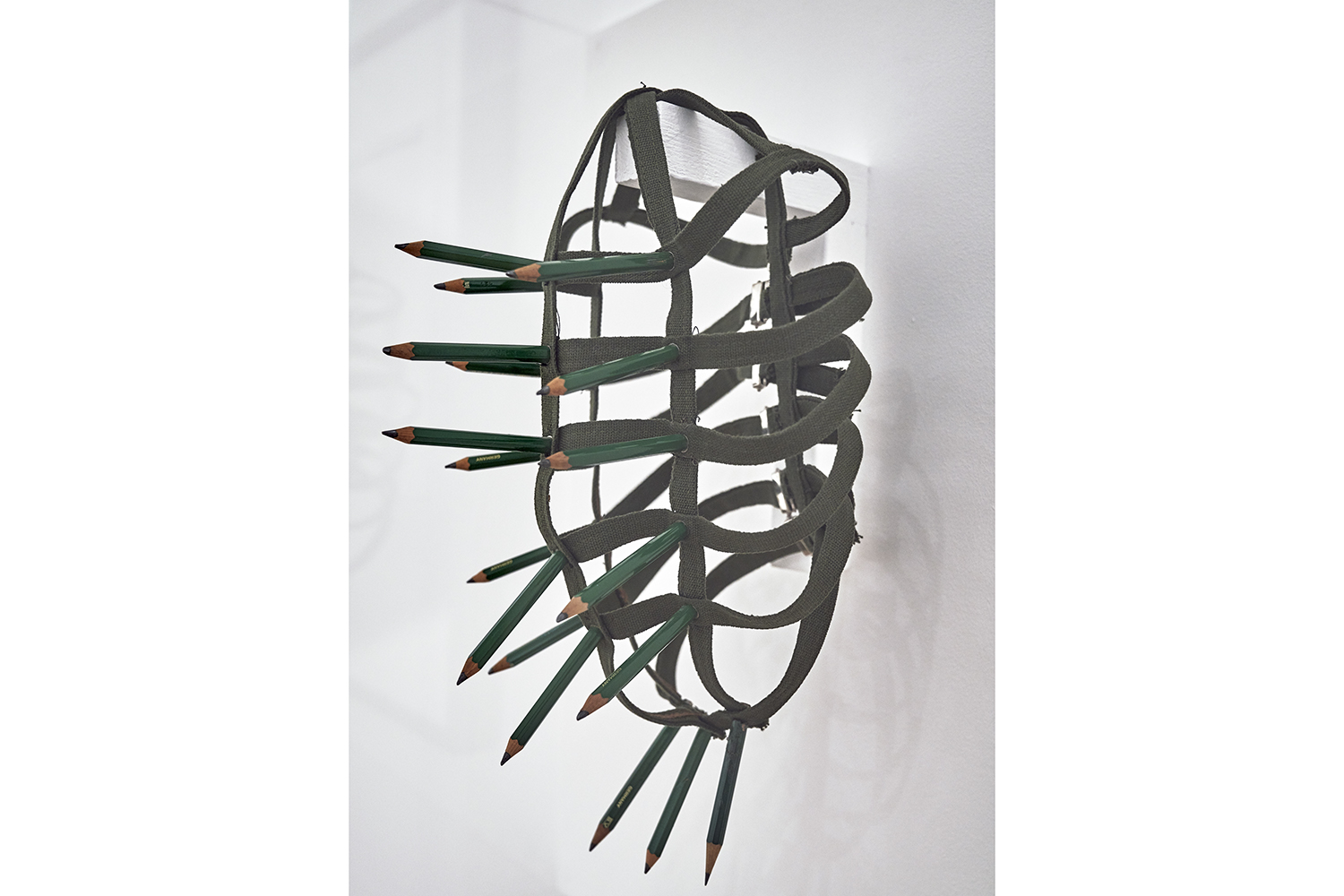 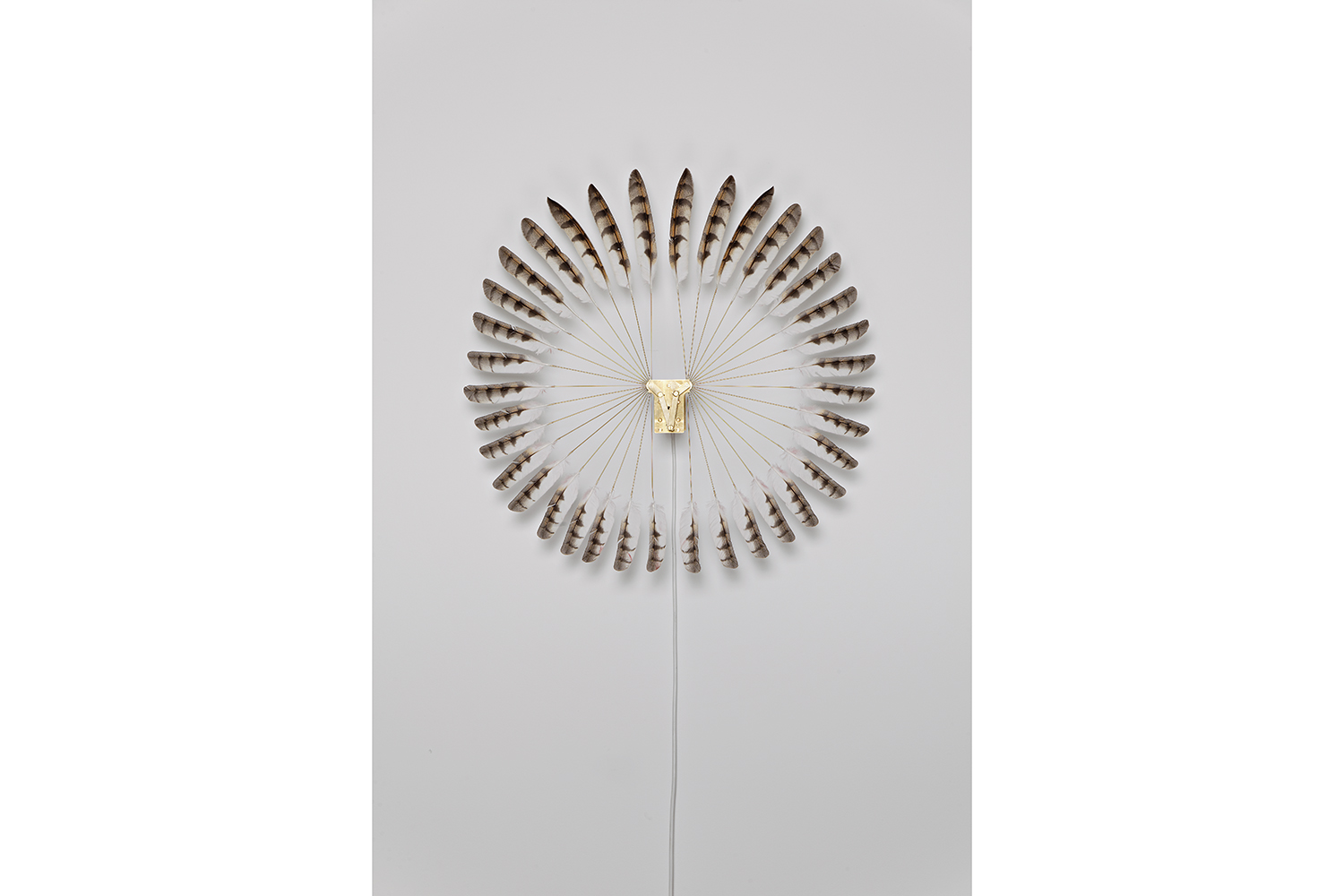 From the outset, Horn placed the body extensions and other objects she constructed for her performance pieces — from mirrored leg braces to feather masks — in specially made traveling cases, often exhibiting them together with related still photographs and films. Some of these objects were also reproduced as multiples or editioned artworks. For example, Horn’s first multiple, Finger Gloves, is a version of that used in the 1972 performance of the same name. Housed in their own boxes, these editioned objects later reference (and frequently provided the funding for) large-scale, site-specific, and often ephemeral installations by the artist.
Berlin-Exercises in Nine Parts (1974–75), which the artist refers to as her “first” film, presents distinct performances or “exercises” in the proscribed space of the artist’s studio. These films, which won Horn the German Critic’s Prize (Deutschen Kritiker Preis) in 1975, stand as an important contribution to the then growing field of performance, video, and installation art. One might consider, for example, the contemporaneous work of American artist Bruce Nauman, whose film Walking in an Exaggerated Manner around the Perimeter of a Square from 1968 takes place in the studio and shows the artist performing a predetermined activity. Conceived as dialogues between Horn’s body and the space, Berlin-Exercises revisits themes explored in “Performances II.” In Scratching Both Walls at Once the dimensions of Horn’s Finger Gloves are extended further. Keyed to the width of her studio, Horn slowly scratches the tips of these even longer gloves along the walls to either side. In Cutting One’s Hair with Two Scissors Simultaneously (1974–75), Horn chops ruthlessly at her own red mane; images are intercut with those of a man reciting a text about the mating rituals (akin to a combative dance) between two snakes.
Just a few years later, black-and-white images of Cutting One’s Own Hair appear prominently in Horn’s Der Eintänzer(1978). The full-length film takes place in the artist’s studio — a space described elsewhere as the film’s principal character. As in earlier performances in which sensory experiences are heightened via body extensions, Eintänzeraddresses a diverse range of perceptions (touch; sight, aided and unaided; hearing; smell; taste). In it, Horn connects what might still be understood as “exercises,” or discrete scenes, in a script. The pacing of the film is purposefully slow and the narrative is often aided by voiceovers spoken by the artist herself. Just as Horn worked closely with friends and collaborators whose proportions strictly informed the shape and size of her initial body extensions, she here inserts people from her own life and belongings from her studio into a scripted narrative. Timothy Baum, the artist’s then longtime partner, or Nada, the sushi chef, interact as vehemently with other human characters as with objects: a small toy piano, a dead fish.
Symbolic objects in the otherwise largely bare studio, such as an ostrich egg and feathers, are also incorporated directly into the plot of Eintänzer. In one voiceover, Horn describes these as “objects which have already begun to exercise their new roles and possibilities.” In the course of the film, one such possibility is that an object might take on a life of its own. Horn’s first “machine,” a dancing table, appears in a climactic scene. Kinetic objects were then included in the exhibition in which the film debuted, for example, The Feathered Prison Fan (1978), two parallel wheels of ostrich feathers that mechanically splay out and contract. The artist thereby creates an ongoing web of associations. “After [Eintänzer] I worked on some new installations, using the same language in another medium. Some people say I just jump from one medium to another, but my signs and secret language stay the same.”3 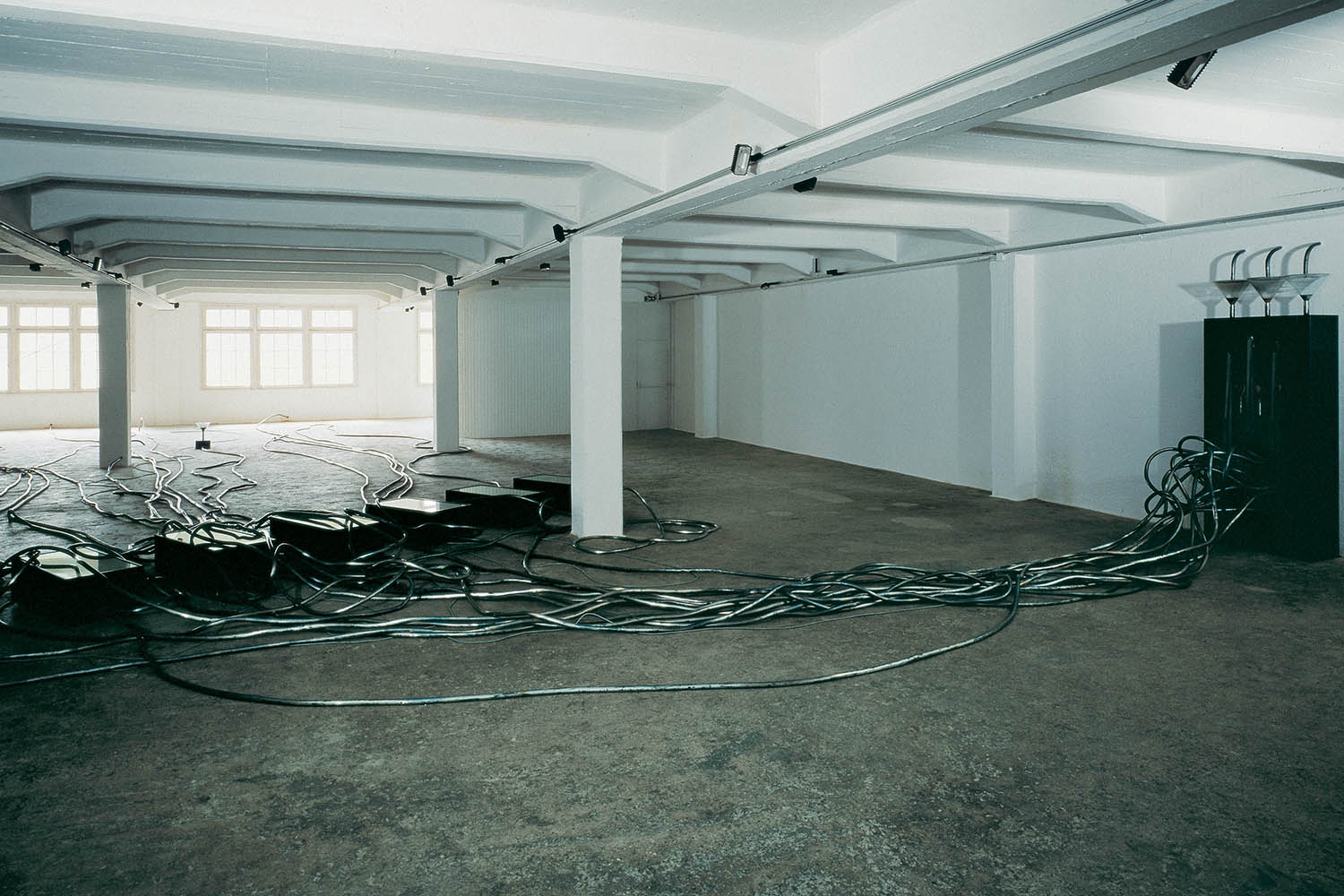 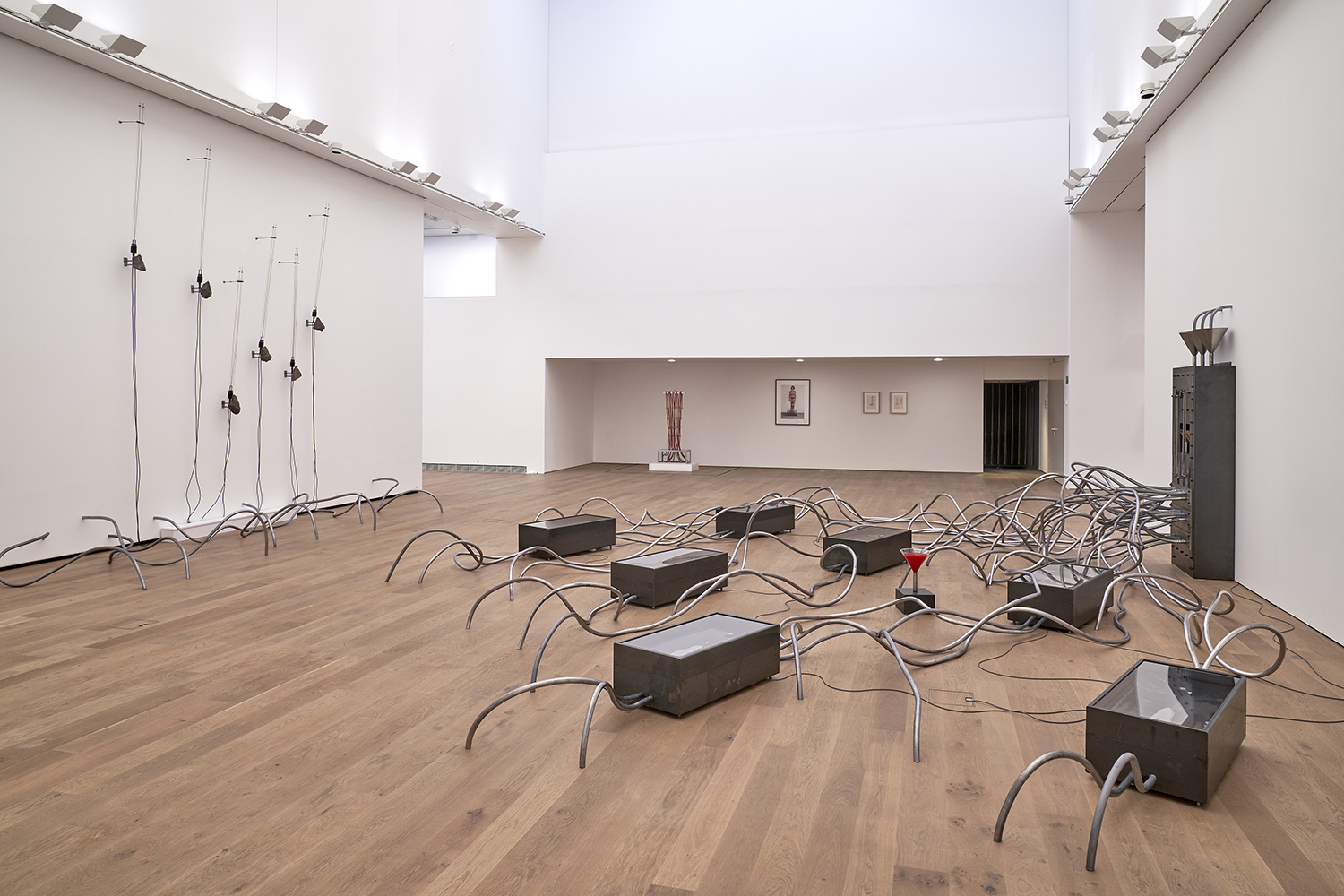 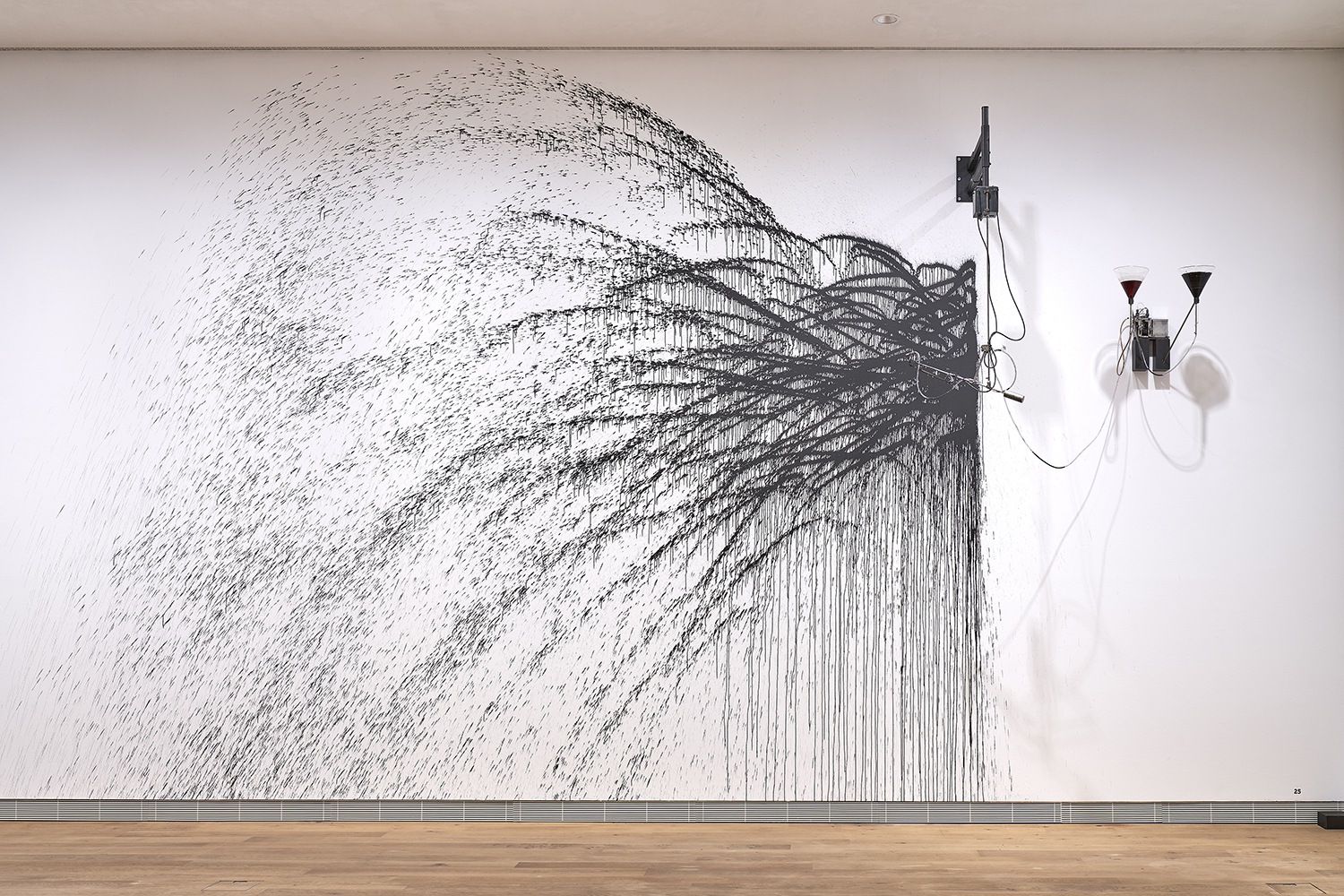 Horn continued to expand on both her installations and her kinetic objects, beginning in 1986 to make machines that toss pigment or paint up and out, coating wall, ceiling, floor. Just as the artist’s early Pencil Mask allowed for mark-making with an appendage not typically associated with drawing, the artist’s Painting Machine (1988) replaces the nominal body of the “artist,” splattering with brushes and metal cups ten stretcher bars below. Other works paint accompanying objects already well familiar from Horn’s previous sculptures or films, such as an egg or women’s shoes. Horn’s Les Amants(1991) was the first of these machines to have a painting “arm” programmed to twist and spray ink across an expanse of wall. In her description of the work, which combines the contents of two funnels, the mood is, like many of her early performances, highly sensual: “The lovers prepare themselves. They bask in pink champagne and black ink, praising each other within the painting machine. In a weightless state of love, in a crazy dance, they spray out their painting.”4 Horn’s machines dance, fly, make love, but also get tired and rest. “Consciousness” is regained only when the work is set in motion once again.
In Horn’s most recent painting machine, Flying Books under Black Rain Painting (2014), a spray gun spreads ink (“black rain”) across the wall and atop three mechanized books — Fernando Pessoa’s The Book of Disquiet, Frank Kafka’s Amerika, and James Joyce’s Ulysses. Like the extensions and performances that preceded it, Flying Books articulates explorations of physical space and the sensuality and fragility of the body. The result suggests large-scale gestural abstraction — typically associated with the artist’s body and notions of subjective experience — yet created by a machine.The expansive quality of the painting, its ink splotches reaching far beyond arm’s reach, bears similarities to the artist’s splayed finger gloves. Horn’s most recent machines also rely on the body of the visitor to (re)activate them via motion detection. Only then does the arm retrace its path. The installation thus, as the artist noted in 1972 as the aim of her seminal early performances, dissolves “barriers between passive spectators and active performers.” Donald Sutherland, the lead in Horn’s best-known feature film, Buster’s Bedroom (1990), referred to his role in language akin to that of a body extension, describing himself as “an appendage to an elaborate piece of work … This was film certainly, but it was also, in a non-formalist way, a piece of sculpture — an elastic, mobile, plastic piece of sculpture.”5 Just as Horn’s array of media blend together in her “transformative process,” the role of the animate participant — artist, actor, viewer — remains inextricably tied to the inanimate world of objects. In fact, Horn’s characterization of silent film star Buster Keaton could also be used to describe her relationship to objects: “Help doesn’t come from the animate world; rather he [she!] breathes soul into the machines: they become his [her!] allies and partners …”6

LYNETTE ROTH is Daimler Curator of the Busch-Reisinger Museum and Head of the Division of Modern and Contemporary Art at the Harvard Art Museums. In 2014 she curated the exhibition Rebecca Horn: Works in Progress and has since published essays on the artist. Recent other projects include Inventur—Art in Germany, 1943-55 and Who Owns the World? Art and Politics in the Weimar Republic.

1 Rebecca Horn as cited in “Verspiegelt. Ein Baum der sich unterirdisch wiederholt,” Du, Band 66 (2006–7), Nr. 770, pp. 40–45, here p. 40. The recent exhibition Rebecca Horn: Body Fantasies at the Tinguely Museum drew attention to this phenomenon by organizing the presentation by key themes, rather than chronologically.
2Performances I are experimental and stop-action films dating from 1970 to 1972, which the artist associates more with her student work.
3 Horn as cited in Bice Curiger, “Rebecca Horn,” Galeries Magazine (June-July 1991): 92–100, here 97.
4 Horn in Rebecca Horn, Cutting through the Past (1995).
5 Sutherland in Rebecca Horn, Cutting through the Past (1995).
6Rebecca Horn, Zurich 1983. Germano Celant went as far as to title an essay “Alter Ego: Buster Horn.” 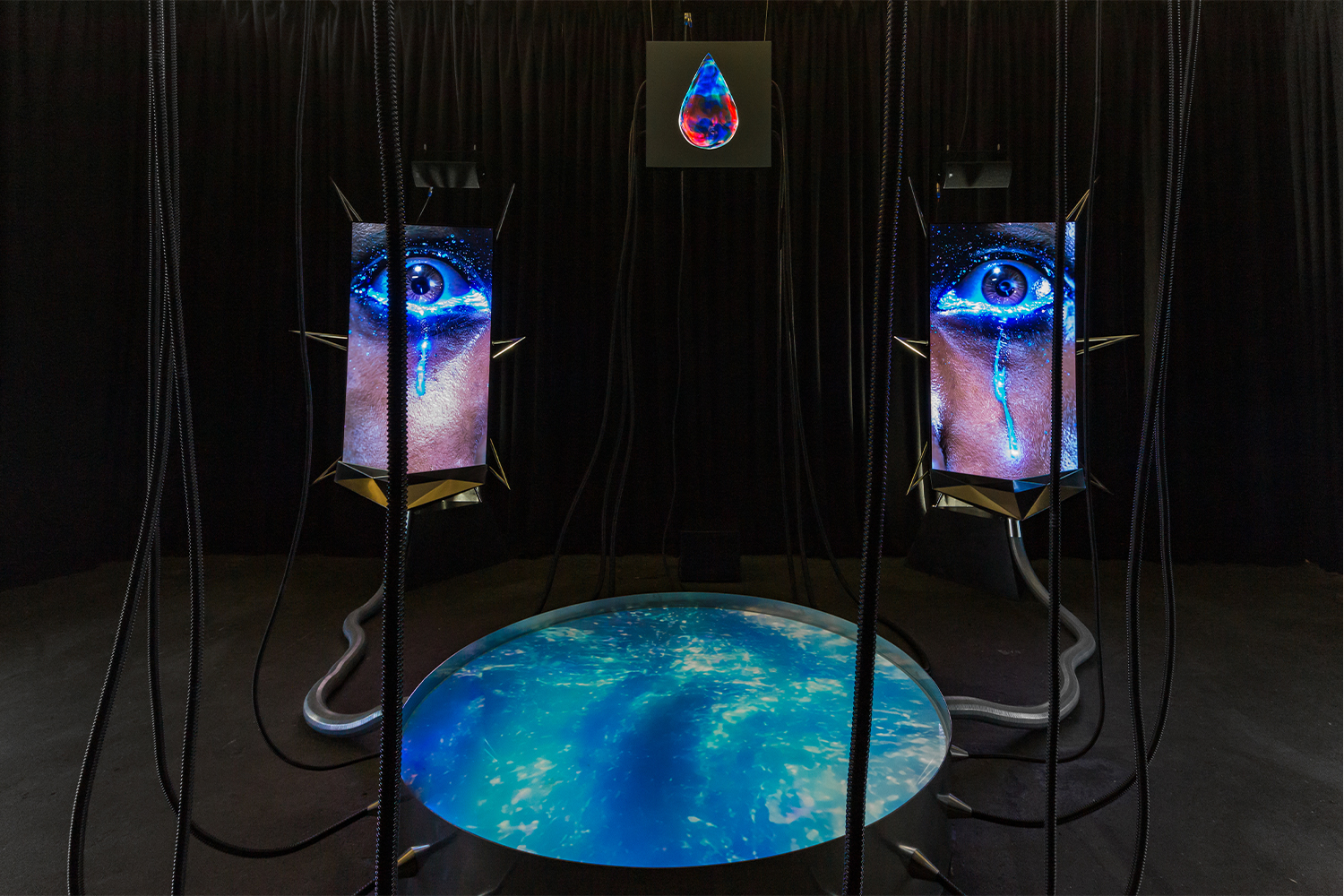 Kader Attia, the artist who co-directed this year’s edition of the Berlin Biennale, has placed repair as a strategy at… 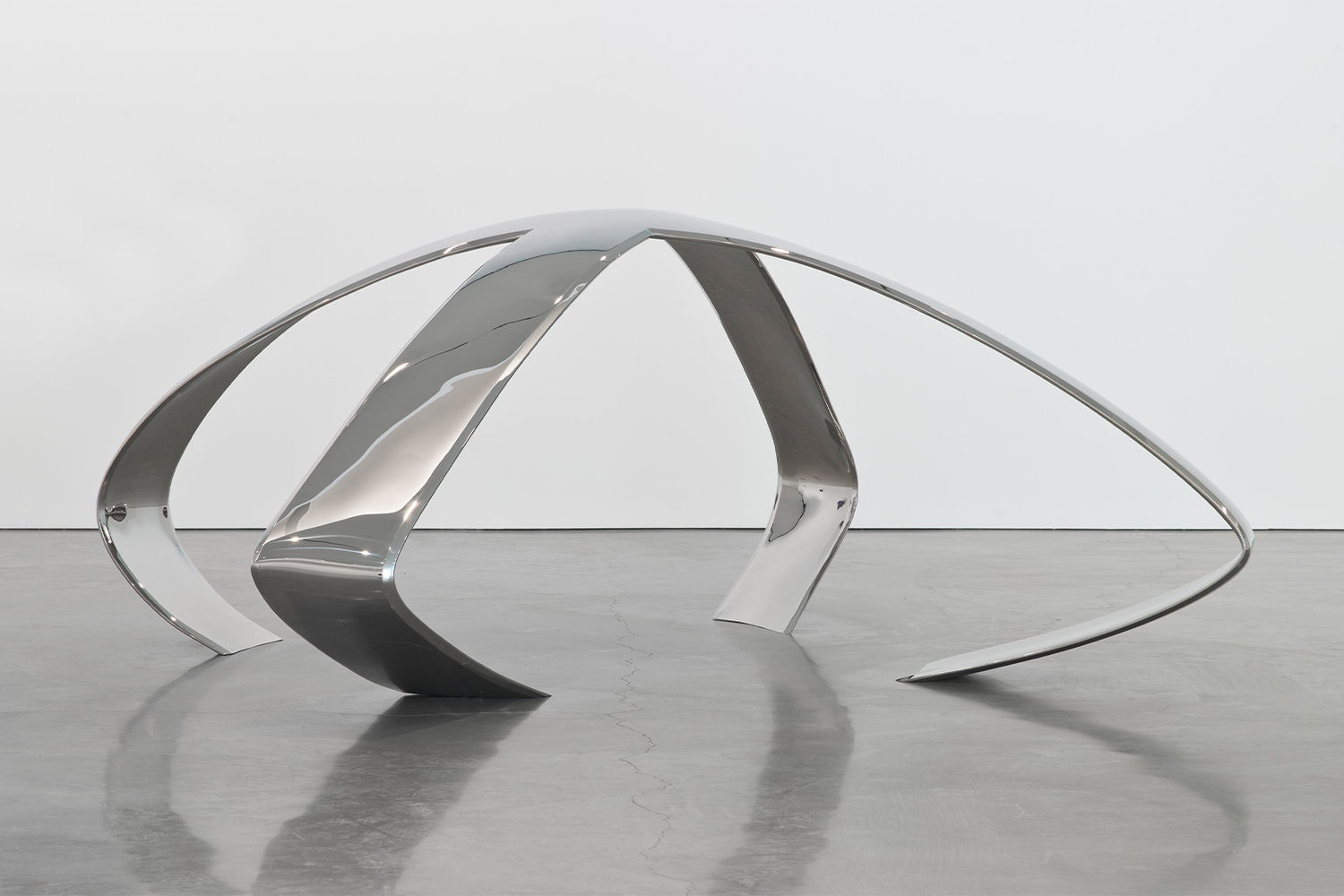 On a clear moonless night, looking out from the shore, the horizon might disappear and the two great physical voids…