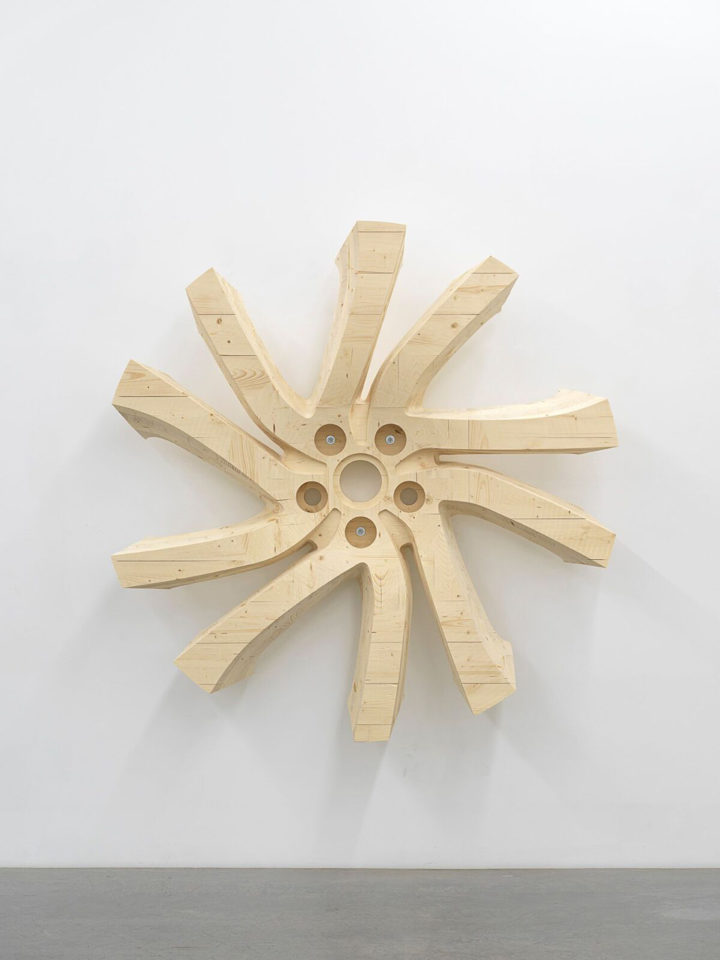 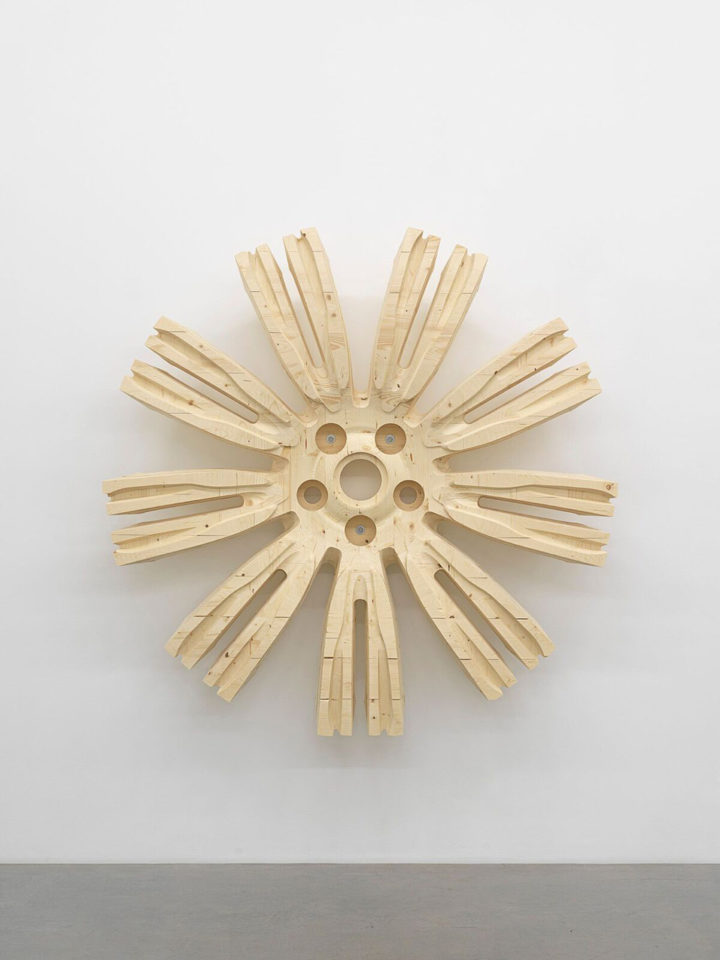 After his Leichtmetallräder (2016) and Snowflake (2017) series, Yngve Holen (b. 1982, Germany/Norway; lives in Berlin) has turned again to car wheels, further abstracting the forms by enlarging them to as much as four times their original size and transposing them from metal to wood. In the interview that follows, Holen recounts with Michele D’Aurizio the steps behind the production of Rose Painting. They dig into the subtle resonances of the custom automobile wheel — a contemporary ornament that speaks to the distribution of wealth, psychosocial design, and the fetishization of objects.

Michele D’Aurizio: Your new group of sculptures further develops two older series, Leichtmetallräder and Snowflake, light-alloy car wheels whose rims were removed using a water jet. Decontextualized and altered, and ultimately placed on a gallery wall according to vaguely graphic configurations, in Leichtmetallräder and Snowflake the wheels became decorative efflorescences.

In the new body of work, the original objects have been further estranged: once the rims are removed, the resulting shapes are then 3-D scanned; the digitized forms are scaled up to a diameter of about two meters (eighty inches) and slightly reworked. Finally, they are cut out of a block of pine using a CNC machine. Like the earlier pieces, they will be exhibited as wall works, without further mediation other than the three screws that hold them up.

I would like you to take me through each of the above-mentioned production steps — all involving singular technologies that in recent years have fully entered the landscape of industrial manufacturing, to the point of informing most of our everyday objects. Many of these processes play a symbolic role not only within these specific sculptures but in your artistic practice at large. Take water-jet cutting, for example. You first employed this process for splitting in half water-related appliances such as water dispensers and boilers (Parasagittal Brain, 2011). There, water was a means for collapsing one functionality into another and “exposing” them both. But here, where did dissecting wheels lead you?

Yngve Holen: The “gutted” rims were scanned and the point clouds of the 3-D scans were turned into NURBS surfaces. I then started working with Design to Production, a small company that sits in-between architecture and building, specializing in handling complex geometries in wood. They completely redrew and optimized the geometry for the size and the material — industrial-grade cross-laminated timber (CLT). The wood workshop Bach Heiden then programmed the forms for their four-by-four-meter, five-axis CNC, and milled them out of CLT blocks. It’s been amazing to work with companies that normally work with architects like Shigeru Ban and Norman Foster. Everyone involved has been state of the art. 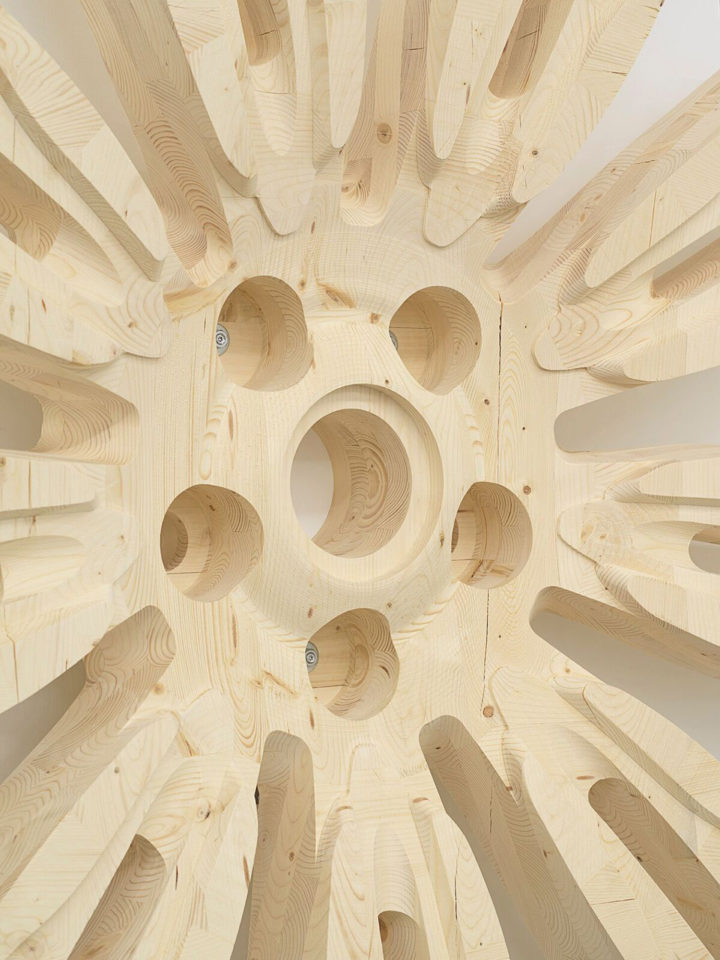 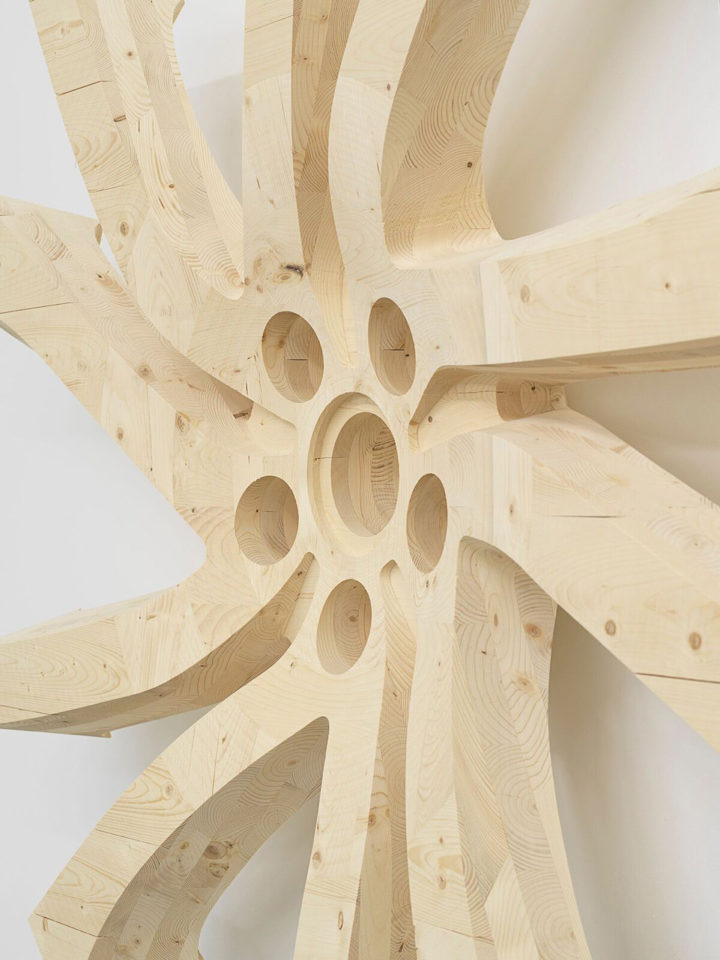 MD: Step two: 3-D scanning. You 3-D scan (and 3-D print) a variety of shapes, both organic and inorganic. I wonder what is at stake in releasing into the world seemingly mimetic objects (from pieces of meat to crushed cellphones) that at the same time convey your formal concerns. In order to be carved out of wood and repurposed on an enlarged scale, many formal features of the car wheels had to be remodeled — edges so thin that they would have jeopardized the structural integrity of the sculpture, or details too complicated for the CNC tools to render. The 3-D meshes were even retouched so that the sculptures would convey a sort of anti-smoothness, indeed a chunkiness, which is more true to wood than to the items being replicated. In an essay on your body of work, Pablo Larios writes that it “places a sculptural concern in an oblique relationship to a society it nonetheless rehashes and comments upon.” I believe this quote is specific to the processes you impose upon the shapes you appropriate.

YH: Some things you look at just stick, and for me it’s been my boiling water kettle, cuts of meat at a butcher, or the thousands of scooter headlights I saw in Tefé, in the Amazon — these were all starting points.

In terms of the wheels, they’re everywhere, and once I started looking at them I couldn’t stop. To imagine that some car designer in 2018 is forced to sit for I don’t know how many years and draw up these options for the consumer to personally choose from is ridiculous. I mean, where else is a conservative symmetry like that allowed? It seems so backward, but I’m drawn to it at the same time. Does the car industry really symbolize the future in 2018? It doesn’t feel that far from the horse and carriage — even Tesla, which is just a battery-powered giant slab for a control system. But I identify with all these formal tricks being played on me.

Anyway, I thought, if I could only just cut the ornament out 360 degrees with a knife while the car passes, it would just pop out like some fallen goods. I wanted to free the ornament from all those hours put in by the designer, sort of free the caryatids from the task of carrying. At the same time, how can you take something, work it into a different situation, alter it without letting the gesture of changing it be visible directly?

MD: A car wheel usually measures between sixteen and nineteen inches. In the sculptures, the original size has been scaled up almost four times, resulting in elephantine objects. But why precisely four times and not three or five? What were the limits you tried to exceed and those that, instead, you imposed on yourself? (In an interview you once asked: “How long can we stretch an idea before we crash it?”) Additionally, it should be worth noting that, while previous works explored the world of home appliances, preserving a certain human scale, these sculptures have a monumental quality that is relatively new in your art.

YH: I wanted to blow them up and I wanted the work to be taller than the viewer when hung. Volume and weight were also a factor. I don’t want to break backs: they’re under a hundred kilograms, so two people can still hold one up. Seeing them finished, the depth works really well proportionally to the four-centimeter cross layers of wood. They’re now like eighty-inch rims. I’d say they have a more human scale now.

MD: You mentioned that the idea of realizing car wheels in pine came to you when you saw eight of the pieces from the Leichtmetallräder series installed on the wooden facade of a mountain chalet, on the occasion of “Elevation 1049,” an art festival held in the Swiss town of Gstaad last year. That display seemed to finally reconcile the cool, even spiny look of the altered rims with the alpine vernacular imagery (the snowflakes, the edelweisses) they unquestionably evoke. Wood not only partakes in that imagery; it fuels it if one thinks about the role of woodcarving tradition in channeling these representations. I wonder if this is the reason you resorted to wood for this body of work. Have you thought about your process here as a kind of artistic woodworking?

YH: The first comment I got on the rims was that they look cute, like flowers. Or snowflakes. But I liked that, and when I moved to American cars — huge Escalades, SUVs, jeeps, trucks — it made sense considering the political situation to title them Snowflake.

When I first showed the German rims at Schloss in Norway — I just called them what they are, Leichtmetallräder [Alloy wheels] — I had a Norwegian wood fence in the show. Then in Gstaad there was the problem of site-specificity. It became clear that there is nothing more site-specific yet also fake in the Swiss Alps as the chalet. So I put the “snowflakes” on the chalet. For a while I thought I had to get my hands on chalet wood and bring that into the gallery to use as a backdrop. But instead I just dragged one into the other and now I have these giant wheels cut out of cross-laminated timber, which is also a common material to build new old-looking chalets. It’s taking an alloy object and transferring it to wood, which is seen as this crafty, traditional format; but it’s obvious that the works were cut by a machine. You can see the tooling, and as precise as it was programmed, it’s still rough, with all the tears and cracks and knots. It appropriates the object, but it also undermines classical methods of sculpture.

MD: Many of your references insist on mobility. The shapes you appropriate are designed to be perceived in motion, and the layered processes you apply emphasize that inherently transient quality. I wonder what led you to car wheels initially. Were you drawn to their cache — that they are essentially “options,” “extras”? And, ultimately, how did you source the wheels that evolved into these specific sculptures?

YH: Many people in art are like, “Yngve, you love cars.” But I’m like thirty-five and I still don’t have a driver’s license. But look at the world: cars are real and around everywhere. I was reading a tabloid article about the cars football players drive up in before the game. It’s like a car show. A huge GLC, a huge Panamera, the third one driving what looked like a Buffalo shoe, all driving alone. The last one had a Tesla X — the only one allowed in the taxi and bus lane because it’s fully electric. When Junior Malanda was playing for Wolfsburg, he was catapulted out of his overpowered VW SUV. He wasn’t wearing a seatbelt and he died instantly.

In Europe, the customer is loyal to the options the manufacturer offers. It’s seen as low to drive off-brand rims, or if they’re the really expensive ones you’re a tuner or rapper of sorts. Even the big football stars have original rims. But in the States it’s different. When I was in LA last time I noticed the Mercedes look like completely different cars than they do here in Europe. It’s so individualized that it’s hard to tell the brand. I focused on the rims that the manufacturers offer. It’s interesting to see how each company stakes out its territory so specifically — a BMW rim, a Mercedes rim, etc. A lot of the rims from this series of works are from British designs. The rims are brutal and huge, twenty-two inches. They really have a distinct style, like they’re made for a Russian oligarch who drives a Land Rover, wants to be a veterinarian, wears Barbour, and voted out, or for Soho House members. But the sculptures play on this. They pose warm, Norwegian wood carved into peaceful and symmetric geometries. But when flipped, they become hostile works about ecology, demarcation, single-family houses, the violence of SUVs, and the countryside.

These works are really symptoms of contemporary taste torn between a longing for tradition and the growing dependence on technological innovation. The works point to this schizophrenia, which is also in our relationship to cars. Optimization of use and emissions, sustainability of production — it’s all challenged by the popularity of the SUV, the most ecologically questionable vehicle. But it’s not just symbolic violence: casualties are more likely in collisions with an SUV than with other kinds of car. 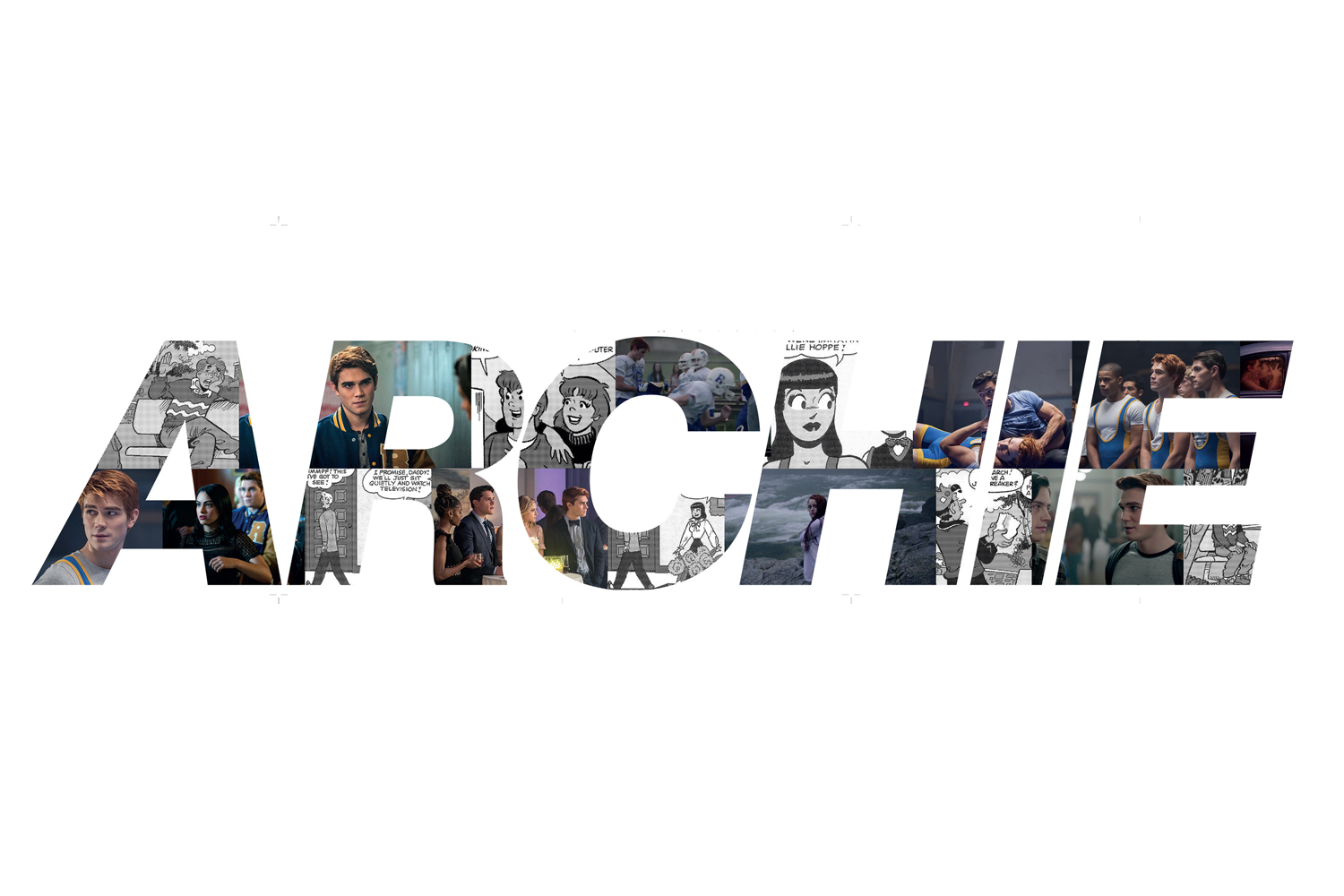 Who is hotter: Betty or Veronica? This is the unanswerable question at the heart of the Archie comics franchise. The…