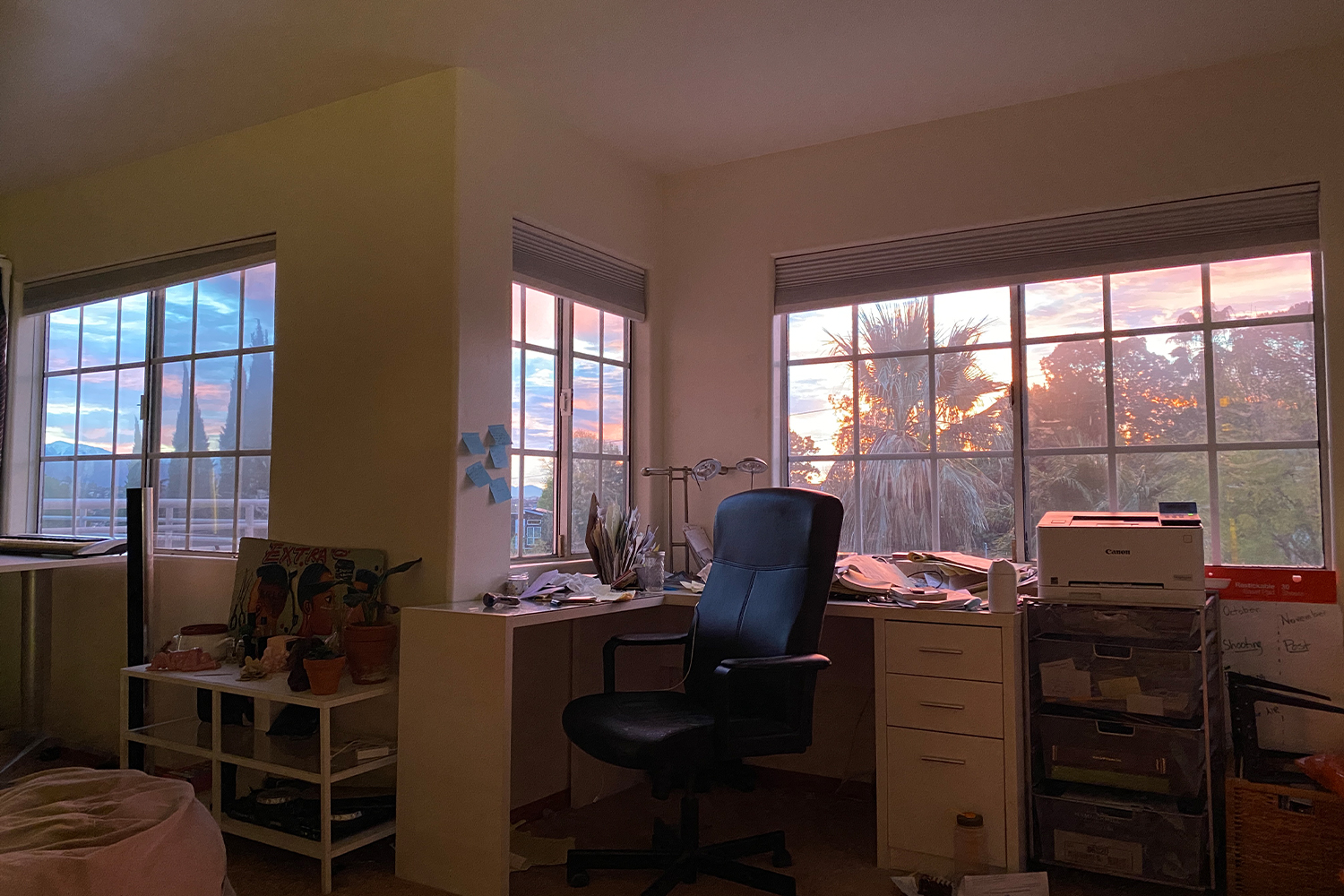 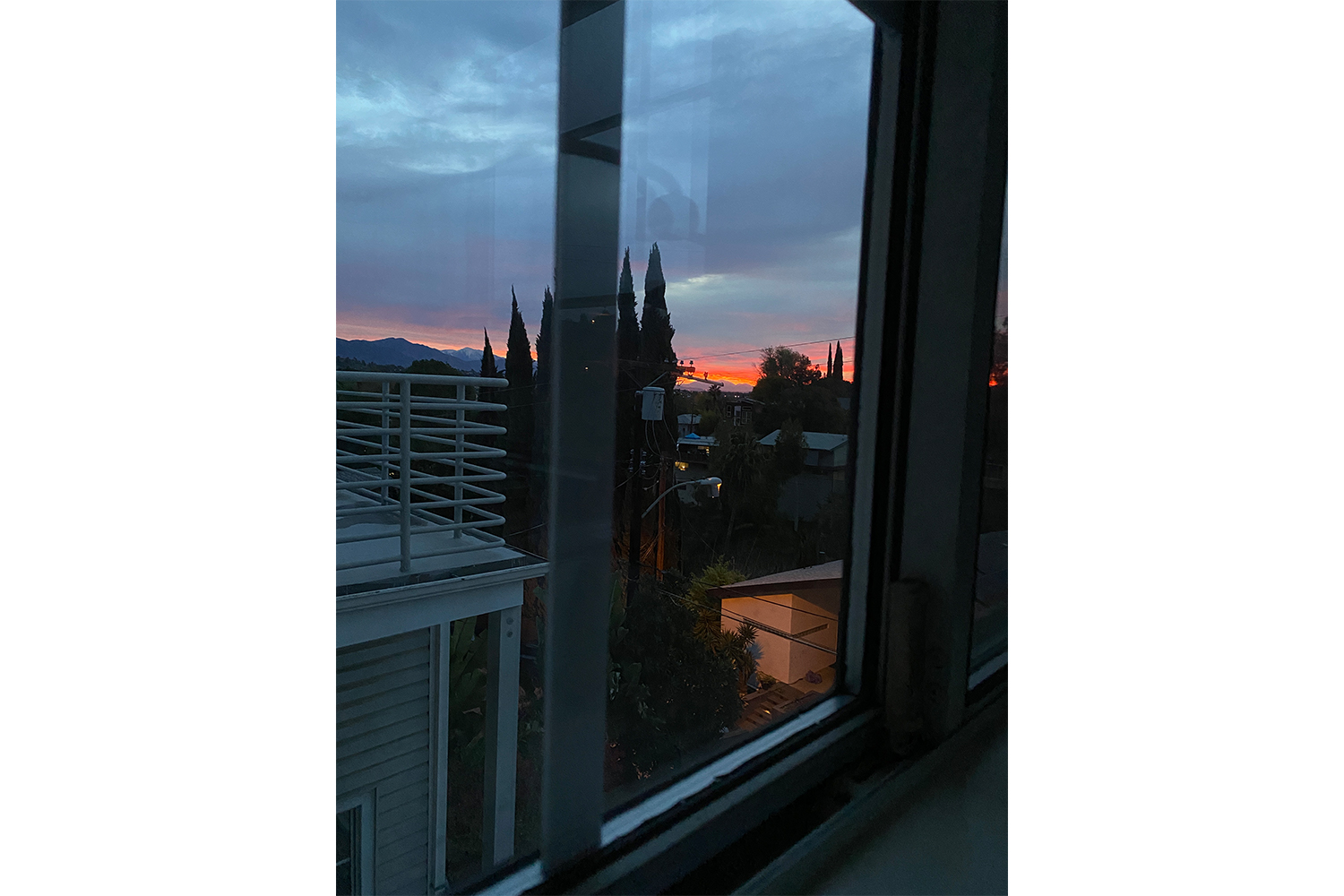 In Los Angeles, we never really see the sunrise. Instead, there is a time when the sky lightens, but our day doesn’t begin when the sun and its rays peak above the horizon. Stony structures and hilly regions to the east of the city, and east of the cities east of The City, block sight of this grand rising, this daily awakening. In this bowl, in this valley after valleys, the sun hides behind the mountains and hills for an hour at least, each and every morning, before she ever shows her face. And when she does, she’s so near and so affronting that you can’t really look at her, much less see her. Not like you can in Plymouth, Massachusetts, for instance. Here, she’s so close and hot — she comes on as a bit of an affront. Here is a place where one knows intimately that they could die from exposure.

From my place in Mt. Washington, in a northeastern part of the city, I am high enough on a hill to be able to gaze at other hills. This is a wealthy experience. And so I gaze at the hills and mountains afar — some are snowy this January morning — and I wonder if the houses atop those distant hills can see a real sunrise. No . When I’m in Palm Springs I don’t see a sunrise. I’ve never been to the Salton Sea, but I wonder if the sun rises over its once idyllic but now toxic terrain.

Sunrise, here, is a shorthand for our acknowledgement that behind the scenes (tectonic), a (the) sun rose, and we expect to see this main actor shortly. (All hype.) Each day begins as a phantom apparition and it proceeds as such, as though it could be just a specter, just a mythology, just a story that was blown across the plains until it had no more landmass to speculate upon.

When we finish with her, we’re a day behind. We can never catch up, but we sweetly aim to give her a nice leaving impression. These days are out of our control, and just as quickly as they come on, we are antiquated. We are the memorialized and memorializing. Yesterday and yesterday-ness. An ending desert: as dusty as the end of a day spent walking around this fair metropolis, producing sweaty adhesive for dust and exhaust(ion) and grit and waste.

How does waste reinvent itself? Well, in mycelial — or hopeful — terms, as destiny. As soil, as psychedelic fodder — at best. The inorganics, however, we really don’t have the time or wisdom to process her, or the will to elevate her, and so we fashion this pollution, we repurpose trash. We live in the wasteland, as a mirror, but now seen through the haze of its own stench. Recycled days can, at best, with the most clean and honorable disposals, be twenty percent used for their materials.

Perhaps waste is the most honest part of the cultural life cycle. It can nurture something transcendent: the spatial and temporal kernel at which decomposition and composition meet. Here, that which is toxic is now generative. Here is a perfect place to see little and to write about all of it; or to see all of it with no time to write. One or the other, never on the same day: we’re never on the same day. The oldest and the newest collapsing like pre-symbolic infant wisdom. We can really see here, if we aren’t too blighted by the light, or linguistic limitations, or the ambitious hubris of sight, if we don’t try to see it too closely or starkly, if the need to shape it into sensemaking doesn’t impede on the pure sensation. 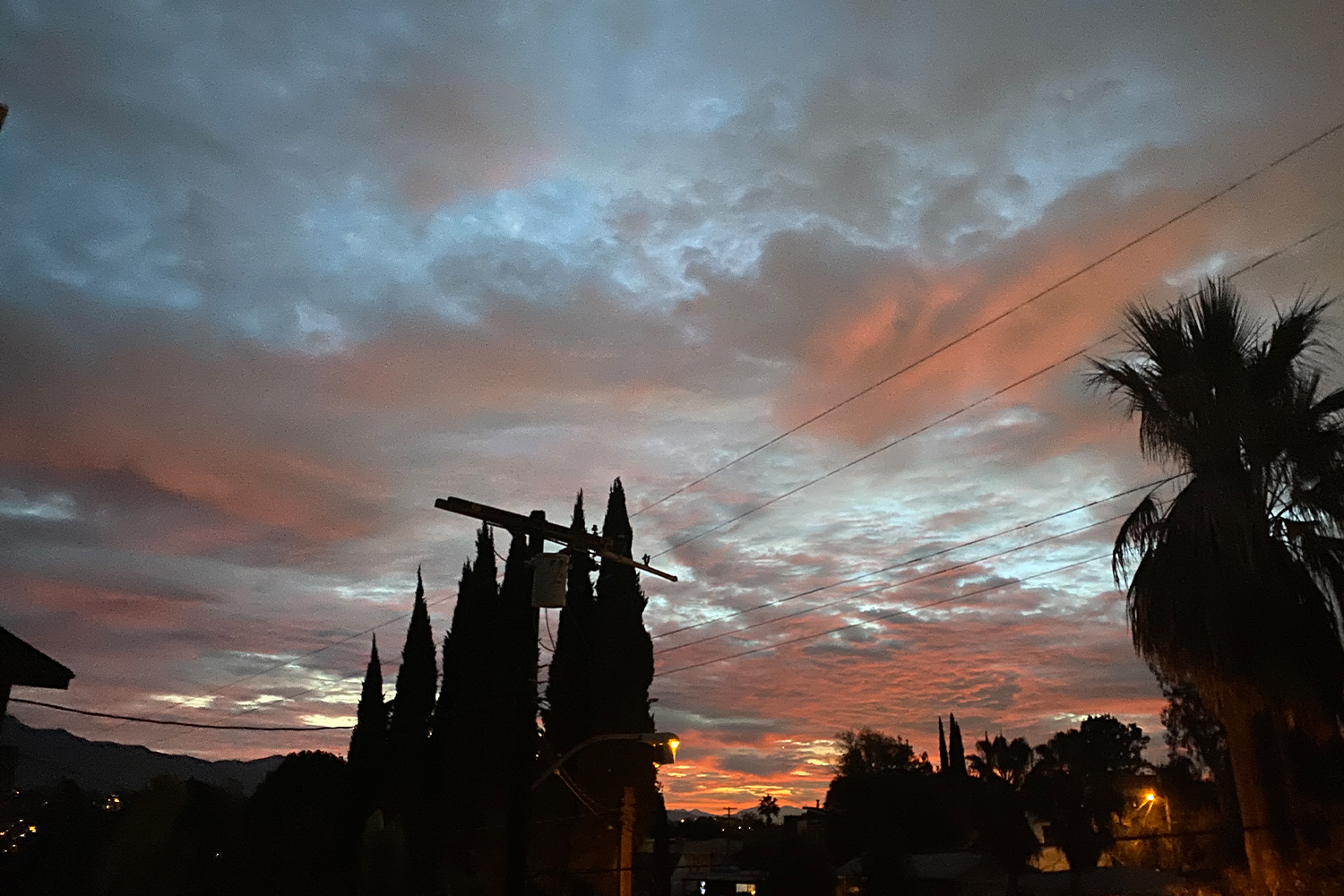 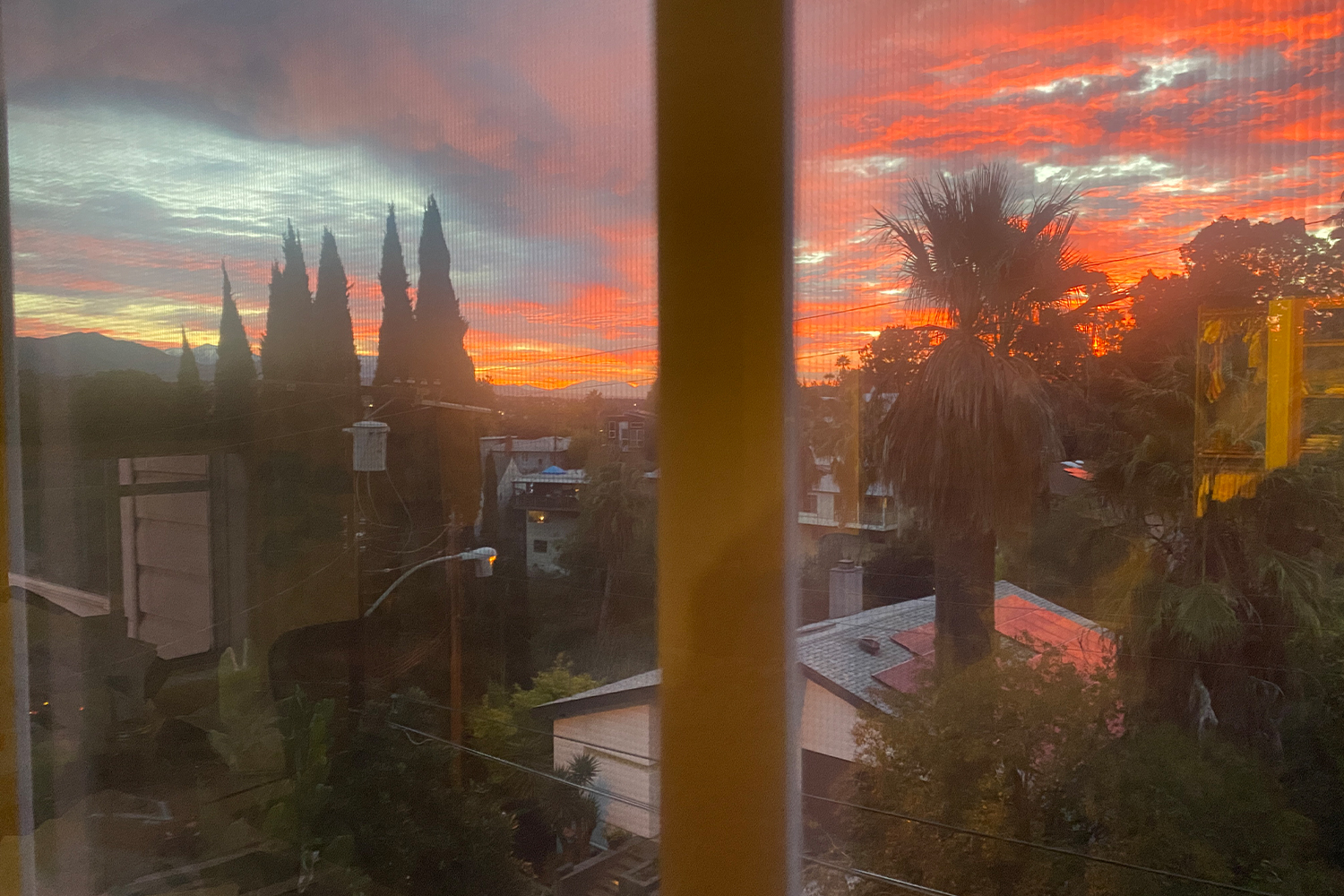 Light changes everything. In a world where I’ve become a critic and a theorist and a performer and media artist, I resent and relish this fact. Everything is angles and exposure and intensity and shadow: so much so that even the coming day, with its alleged sunrise and consequent illumination of the landscape, feels mythological, flimsy. Time passes here like in no other place. I (am) moved here to surrender. I (am) a muse (amused) at trying to outwit the nature of exposure but often find myself burned. Emerging artist does some more emerging. Mandy Harris Williams dies of/for/from exposure, I think, and I laugh and tempt my own ghost. (This ghost? Past or future origin? Indeterminate.)

On this morning I am up early. I generally eschew a regular sleeping schedule. I prefer to catch the muse when she’s active, but today I’m awakened utterly unamused. This waking is woefully imposed, the result of acclimation to a disruption consisting of five days and restless nights of the most intense stomach cramping and diarrhea that I’ve had in my life, save for the one time I got food poisoning from the honey walnut shrimp at Panda Express.

That time, I was in Palm Springs with my family and my boyfriend and his family, and something I can’t recall had pissed me right off. So much so that I left the house and drove to feed myself, and didn’t ask anybody, nor care, if they wanted me to bring something back. It was the first week I was taking Prilosec to cure my GERD (gastroesophageal reflux disease), which for two years had caused chronic laryngitis, rendering me totally silent for around two days out of each week. (Acidic gratuities, by the measure of some.) This time the stomach complication is brought on by a liquid chlorophyll supplement I started using at the turn of the year. The TikTok girls have convinced me that by using it I might achieve two of my vainer goals: 1) perfect skin, 2) pussy “tastes like water” (here not in order of my priorities).

Another day, another fledgling attempt at learning to best understand and utilize the sun, trap her light, manage her exposure from within, and grow, and the predictable albeit disappointing outcome: wrenching toxic waste from an all too densely fibrous method toward beautification.

For five days I lay in bed doubled over, unable to sleep, waiting to see the sunrise, waiting to feel the power of the sunshine all over my body, awaiting erotic liquefaction. But this anticipation and early rising pain is not without the perks of witnessing the charm of the morning before the light. In these quiet moments, I tear through fiction for the first time in years. I laugh out loud at Brontez Purnell’s 100 Boyfriends and pen argumentative marginalia throughout Toni Morrison’s Song of Solomon, which I hadn’t been able to catch a rhythm for when I first opened it in San Miguel de Allende. But here and now, in the doubt before the day, everything is shadowy and illusory, and yet everything keeps time — although I’m not sure where it’s kept. I’m considering narration and Morrison’s performance of a narrator that I’m certain isn’t Morrison herself. I’m considering ghosts and specters and how we are bound by their apparition, their history, histrionics, hype, and haunting.

On the sixth day, right as the sun rises, these internal tempests subside. These struggles with sun and absorption, the hype and the horticulture, this scorching asshole, they all quiet their cacophony. My stomach feels calm. And my voice, though I haven’t had any need to use it at this hour — I trust it will come through steady and mellifluous and so so wet and smooth.

Mandy Harris Williams is a theorist, multimedia conceptual artist, writer, educator, radio host, internet/community academic, and musician. She will curate and perform in the music festival “Music/Theory” at MOCA, Los Angeles on June 6, 2022. 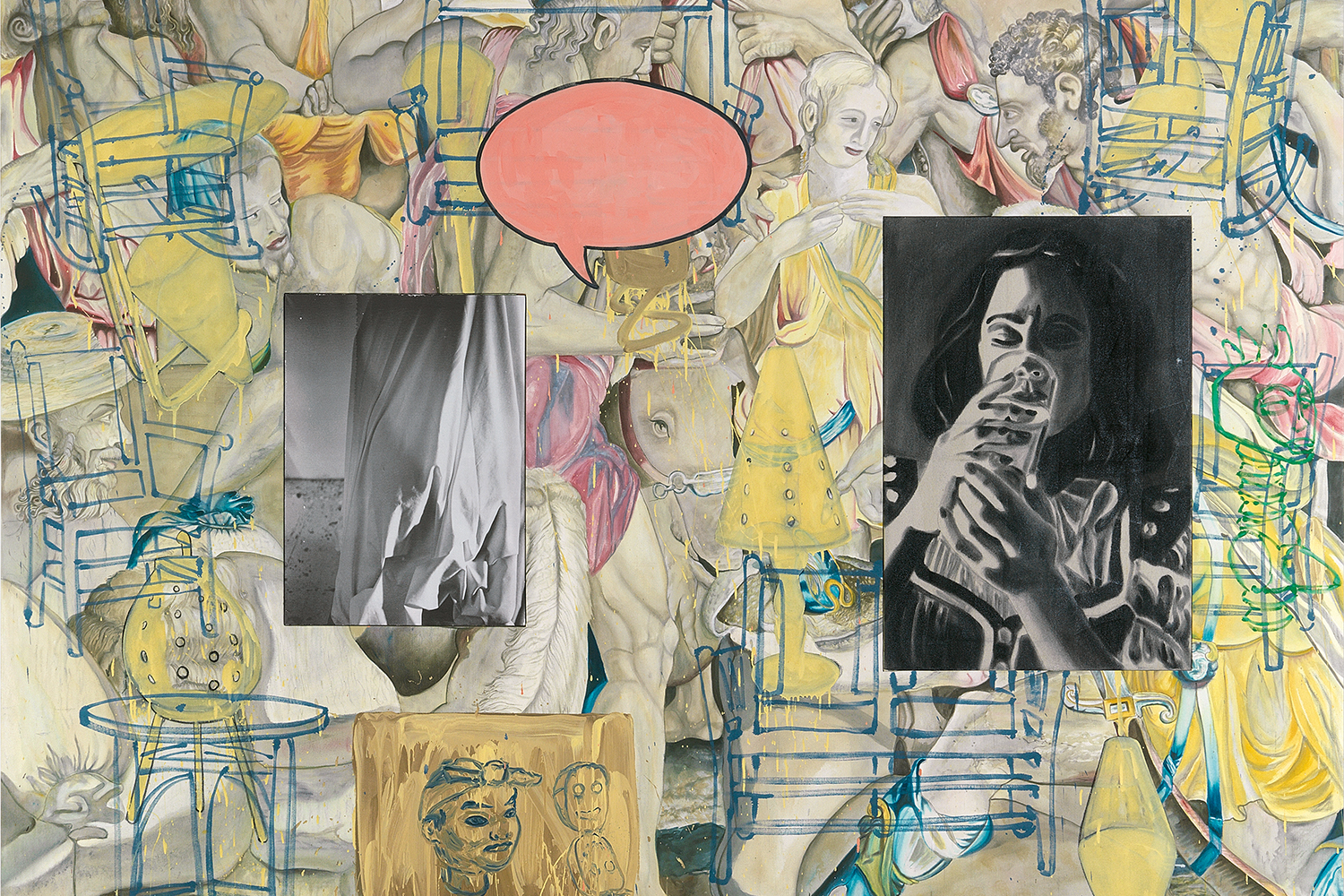 Originally published in Flash Art International no. 133, April 1987. I met Helene Winer when she was still at Artists… 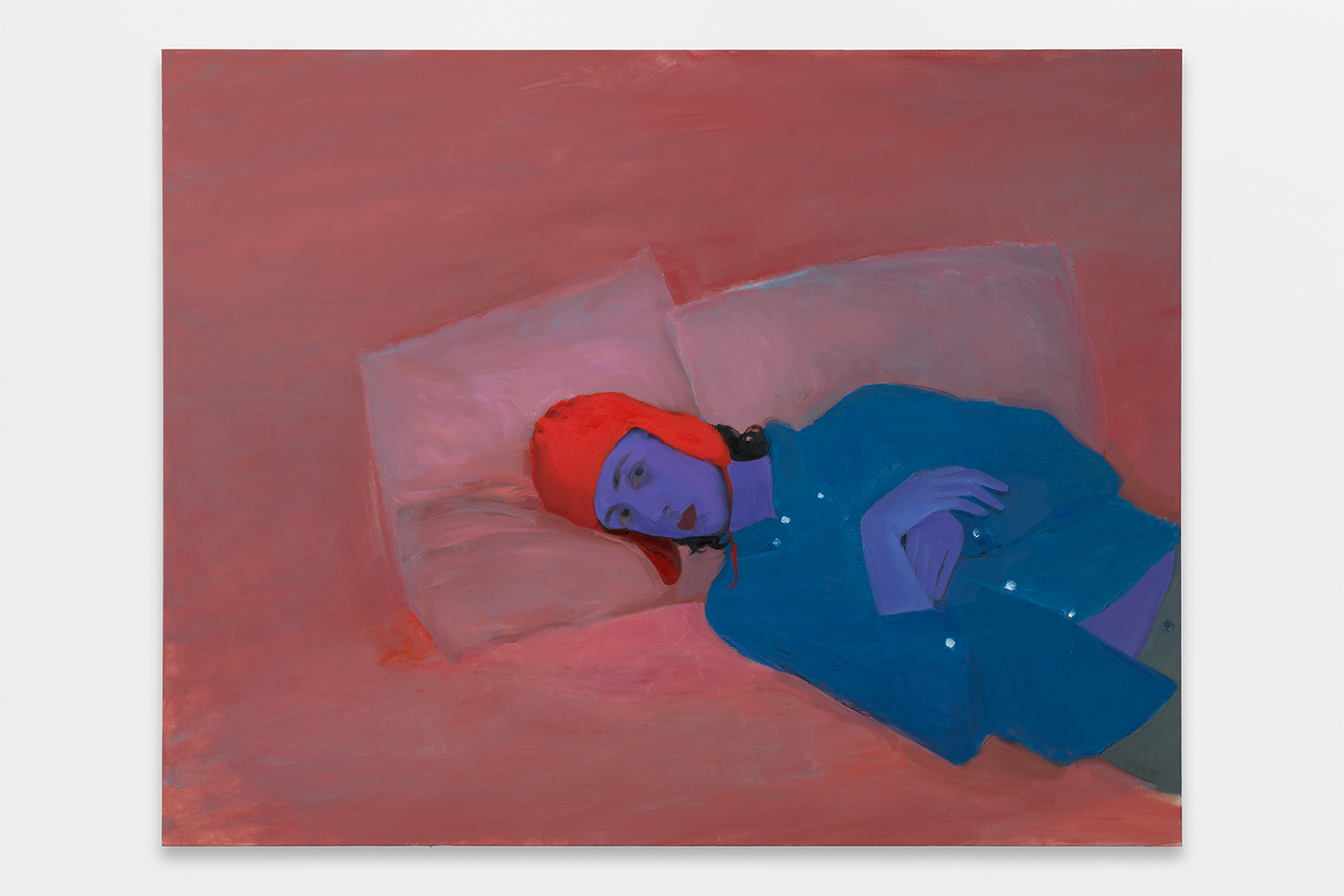 From the clutter of urban life, Xinyi Cheng subtracts transient moments of respite. Her subjects, alone or in pairs, mostly… 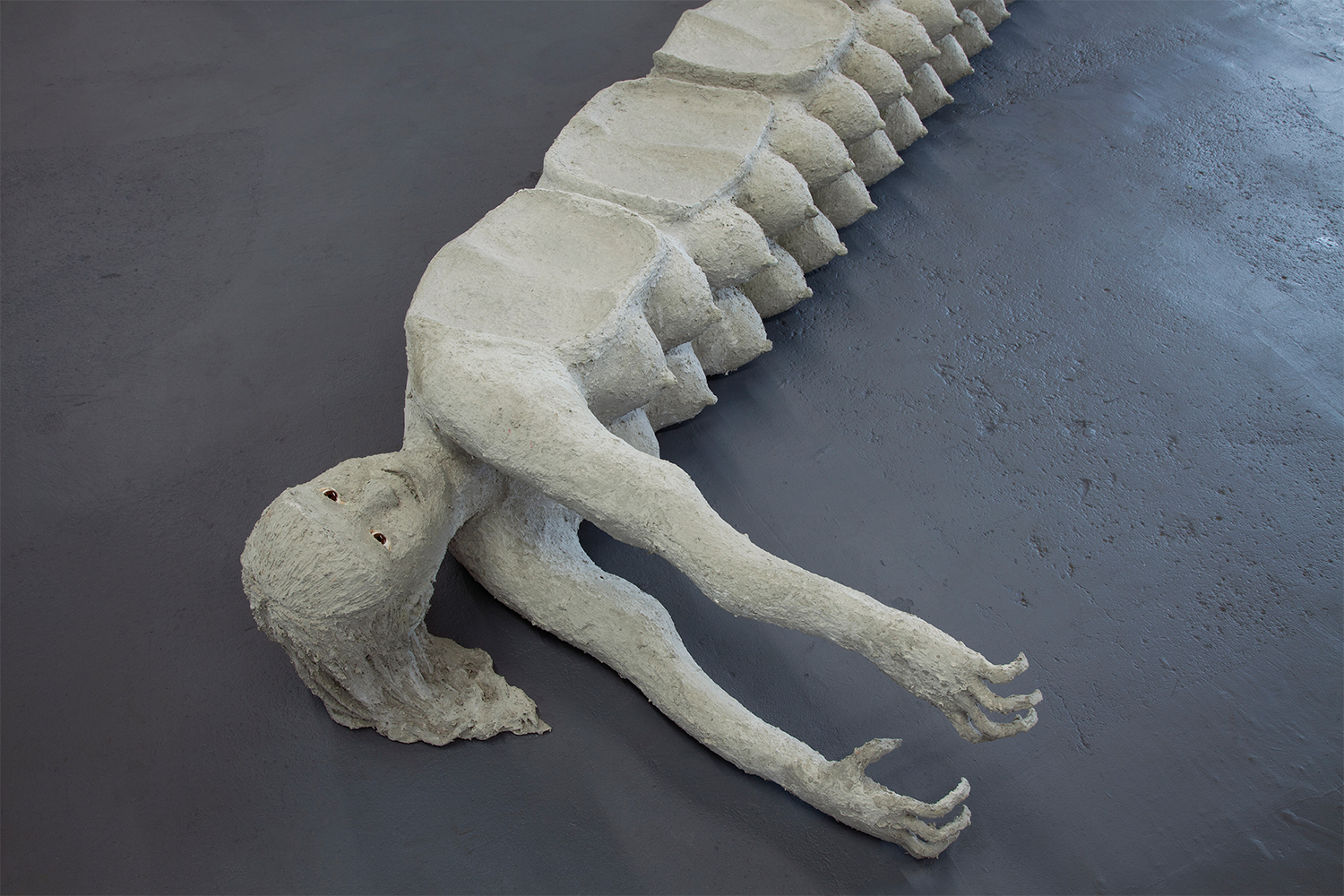 It’s easy to be led to the abyss. — Cixin Liu Catalina Ouyang sees their multimedia practice — an amalgam… 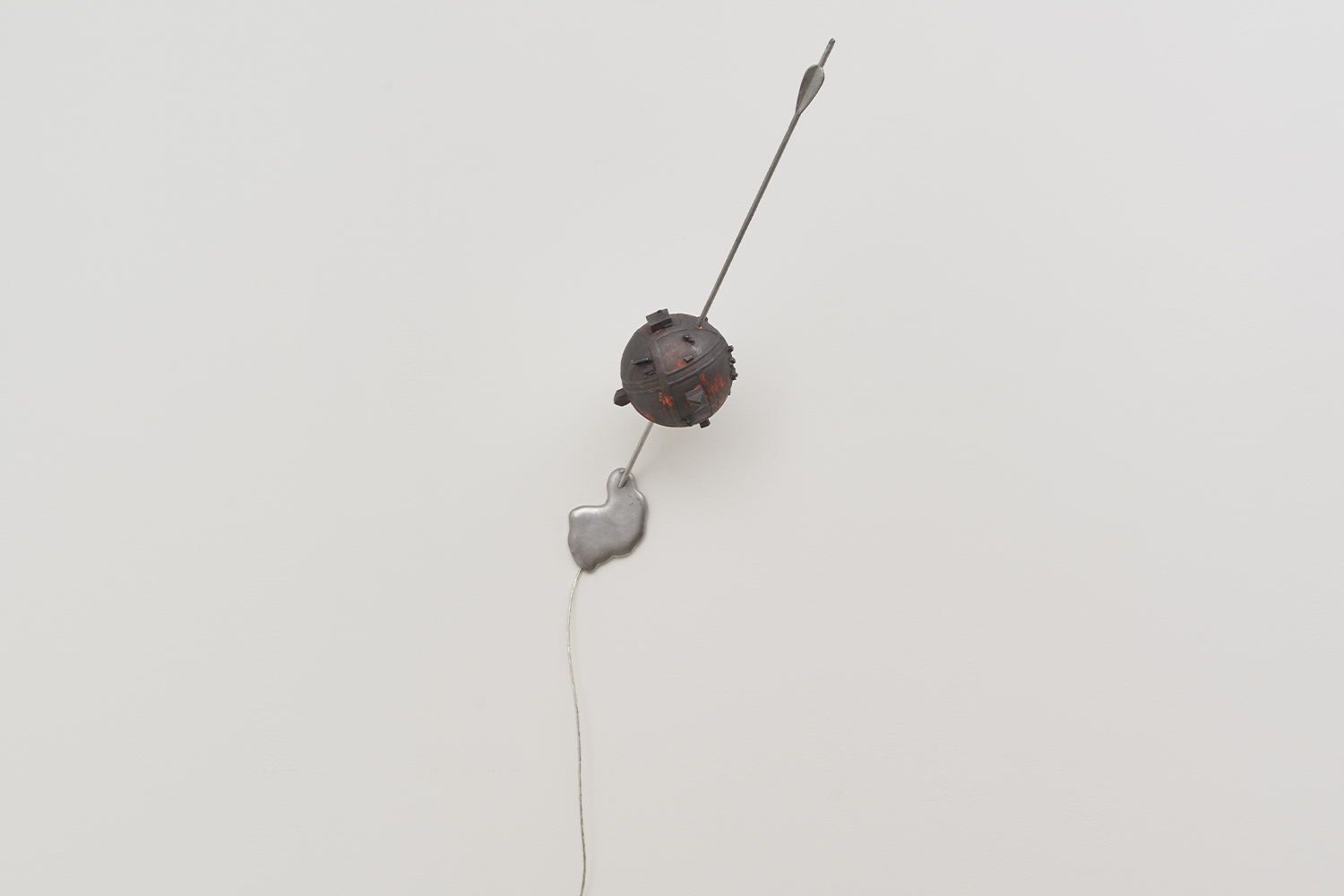 Olivia Erlanger: I’ve been really interested in the psychology of interiors and the way that space can act as a…