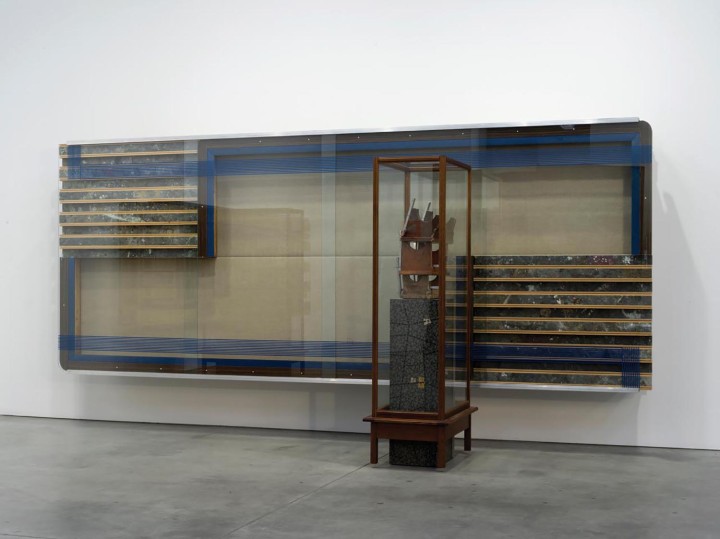 Reinhard Mucha seems to me to be a central figure in today’s profound dilemma of aesthetic morals, in the (supposedly) hopeless confusion of values in our media society, with its production of time and language after Friedrich Nietzsche, after Albert Einstein’s theory of relativity, after Ludwig Wittgenstein, after Karl Popper and Thomas Samuel Kuhn and after Leo Weisgerber’s and Edward Sapir’s theories of linguistic relativity. Most of the art that has come to be known as postmodernism in the past fifteen years (American architecture in particular) is little more than a sign, and a redundant one at that; merely one more way of expressing what is actually a highly fascinating problem. Postmodern art (in a derogatory sense, but certainly in unspoken agreement with Charles Jencks) has been unable to transcend the bare metaphor of the futility of absolute values. An awareness of tradition is merely illustrated through quotation because knowledge (of the historical difference) is grasped as possession and not as an instrument for acquiring new insights.

Mucha’s citations do not refer to the level of appearances; they are marked by his interest in the behavior of historical works. His installations combine and confront heterogeneous, complementary and at times utterly incommensurable structures and strategies from the most diverse sources. Thus a decisive distinction lies in the fact that Mucha does not treat artworks as products (Ergon) but refers instead to their immanent movement (Energeia), i.e. to the conditions that allow art to emerge as an exemplary form of human action.

It is no accident that major, room oriented works installed on site, like Calor (1986) at the Centre Pompidou in Paris, Kasse beim Fahrer (1987) at the Kunsthalle Basel and parts of Wasserstandsmeldung (1986-87) in Paris and at the Kunsthalle Bern, are all constructed out of objects and materials (ladders, mobile walls, partitions, glass display cases, chairs, tables, fluorescent lamps, etc.) that have been borrowed from the respective museums for the duration of the exhibition, i.e. constituents of that vast establishment that not only provides the means of presenting art but also conditions perception as the prerequisite for the very existence of art today. This of course implies the criticism that contemporary art is ‘voluntarily’ cutting back its ‘freedom of thought’ when working with the basically one-sided and arbitrarily focused institution known as the ‘art business.’ However, so-called ‘ephemeral works’ and installations certainly do vent their protest against the rapid rate of disintegration and the loss of identity in our culture. (Paradoxically, the greater the commitment underlying the staging and conceptual framework of many installations, the faster they fall prey to the ravages of time, thus ultimately undermining the promise of identity — as in Günther Förg’s spatial pictures and Gerhard Merz’s spatial art). However, even greater significance must be attached to the consequences of such transience. Since works vary considerably from one space to another, since it is sometimes neither feasible nor meaningful to mount them at all, parts of them may be integrated into new works or they may even reappear in the form of photographic documentation. Yet, despite the extremely reduced vocabulary of objects and materials and the constraints of form, they acquire an extraordinary openness of content. By exemplifying physical reference to place as one of the basic issues of any artwork (in keeping with the tradition of Minimal Art), the openness of these works fruitfully and paradoxically postulates art as having no locus to the point of becoming a purely potential field of intelligible ideas (à la Duchamp).

Equal significance must be attached to the fact of the all-embracing critique in Mucha’s critical reflections, but they do not rest there. They are also reflected in a rather academic fashion: the staging of the sculpture is the event of the sculpture; it is sculpture as event. The works stand for what they actually are, namely things on display; they show the act of showing; perception is directed at perception itself. Not only have the referents of the artwork been negated but also something that is traditionally considered essential to art – the metaphor (cf. Jackson Pollock, Ad Reinhardt, Robert Ryman). Mucha’s autarchic works do not talk about the world, nor are they metaphors for its events. Instead, they are instruments for generating new, autogamous experiences, i.e. compelling instances of a previously unknown autonomous world. I would even venture to claim that the reference to railroads in many Mucha’s works is but a vehicle, on the level of subject-matter, for mobilizing our common (political) history as a collective conscious, i.e. for inaugurating something that has always been a feature of the structural level (in the, admittedly unusual, reticulation of traditional strategies, of historical acts of perception). Similarly, I find the figurative character of some of the works redundant (Kasse beim Fahrer, 1987, depicts a carousel), comparable to the use of color in virtually all paintings today. Coloring has become superfluous because it can no longer make an unanticipated contribution to pictorial information: it is no longer capable of generating meaning, particularly in a new and unfamiliar fashion.

In other words, searching contemplation in front of Mucha’s works does not lead to extra-artistic, so-called real facts, but instead to the works themselves, there to undergo change and find new energy. We are dealing here with a cogent epistemological insight: only through orientation towards itself, towards its specific ‘locus,’ towards the transformation of the linguistic order and concurrently the syntax of perception can art engender new thoughts, new ideas new knowledge and in consequence ‘change the world.’ Herein lies the sense and the only justification for art.

Mucha’s works manifest an understanding of sculpture that is situated somewhere between Joseph Beuys’ spatial sculptures as three-dimensional images (although sculpture in Beuys’ case refers to the remains of an action to which it owes its existence) and Bruce Nauman’s work, which glosses over the visual aspect in order to focus on the physical reference.

Moving between pictorial arrangement, on the one hand, and the staged compulsion to experience volume, on the other, Mucha’s works combine a diversity of contradicting traditions which cannot be discussed in detail here. A few aspects do, however, deserve mention. The poetics of classical modernism form the basis of Mucha’s critical reflections. They are also reflected in reference to Constructivism, Concrete Art, New Realism, Pop Art, Minimal Art (Carl Andre, Dan Flavin, Donald Judd, Robert Morris), Conceptual Art, Process Art and Analytical Art; in certain aspects they recall Romantic, Baroque and even Medieval Art (e.g. the fluorescent lamps in comparison with the gold on medieval panels), to Duchamp’s ready-mades, to the concepts advanced by Joseph Kosuth, Daniel Buren, Giulio Paolini and others. Let me repeat: the interest in these associations, as I see them reflected in Mucha’s work, is restricted exclusively to semiosis and linguistic order, in other words, to the manner in which the world is absorbed or rather designed. Physical appearance is of no concern. Mucha’s works speak several, at times incompatible, languages ‘simultaneously’ and pit contradictory poetics against each other. The more striking is his ability to avoid linguistic chaos, to establish and demonstrate ‘connections’ between these heterogeneous orders without resorting to metalanguage or setting up what we now know to be the illusion of a hierarchy.

The nature of his basically affirmative attitude toward assimilated tradition and the formal unity of his ensembles reveal a poetic that I believe shows a rapport with classicist devices. Regarding a revival of classicist poetics, Mucha has much in common with Gerhard Merz; in putting forward aesthetics (in its colloquial sense) as a criteria for art, he shows an affinity with Förg. Some theories that run counter to this classicist approach clearly stand on equal footing and serve, by contrast, to set off and define the significance of Mucha’s oeuvre. I am thinking of the diffuse, anarchic character of Albert Oehlen’s work, whose simpler, romantic nature highlights the rifts among semantic systems; or Franz West, a highly intellectualized romantic whose work is utterly oblivious to aesthetics, whose sculptural pieces are neither expression nor representation, but ‘simply embodied thought’; and finally, Wolfgang Laib and Aldo Walker, whose indifference to a system of art as a sequence of merely formal problems has led them to shun anything that could possibly smack of artifact and thus to achieve a remarkable factuality.

The co-existence of variable linguistic systems corresponds in Mucha’s work to the fact that his ensembles lead several lives simultaneously. A felt-covered base hung on the wall with a pane of glass mounted in the front of it is ‘itself’ an object on the wall but also a picture in relation to another sculpture in the room that is mirrored in the glass front. This sculpture in the room, as such an accumulation of objects made to look in themselves like a carousel for instance, becomes the pictorial subject matter in relation to the mirror image while simultaneously acting as a figure in relation to the base. Fluorescent lamps as elements of this configuration illuminate the base mounted on the wall, and mirrors as elements of the configuration are reflected in the glass of the object on the wall — torque and self-reference ad infinitum with all levels of reality bared and equivalent: the object is both figure and ground, picture and model, subject and predicate. Cause and effect are identical, the principle of causality is suspended, linear time in this cyclical system has become inoperative, and finally, subject and object lose their identities as an infinity of entities. We are confronted with the principle of relativity, at its most impressive in James Joyce’s Finnegan’s Wake but with a history that goes back to German Idealism (J. G. Fichte) and the literature of Romanticism (Novalis). On the physical-perceptual level, Mucha’s bewildering ensembles recall the dizzying intoxication of magnificent baroque ceiling frescoes (Andrea Pozzo), especially with the artist’s penchant for rococo ornamentation that relieves the severity of linear clarity. Mucha’s oeuvre can undoubtedly be read as an attempt to restore fertility to the arid wastes of modernism as an unfinished, liquidated project. On the other hand, Nieztsche’s circulus vitiosus deus, which might be viewed as an emblematic paraphrase of the above-mentioned torque, once again raises doubts, nagging doubts as to the viability of this already classical ideal, this modern utopia. The efficiency of our culture, intelligently exploited in Mucha’s work, lies in the reticulation of complementary traditions, in the equivalence of contrasting world views, i.e. in the faculty of synthesizing thought, which just might make it possible to institute the change of paradigm required to bring about an acceptable orientation again.

In conclusion, I should like to mention how successfully Mucha allowed his work to unfold with a maximum of effectiveness within the context of the late modernist, high-tech architecture of Centre Pompidou (late last autumn). The Kunsthalle Bern with its central space and several adjoining rooms was also eminently suited to works that are open in all directions. The linear sequence of rooms at the Kunsthalle Basel presented an entirely different situation in basic contradiction to Mucha’s work and therefore an all the more fruitful challenge. The joint exhibitions in Bern and Basel in the spring of 1987 showed close to forty works done between 1981 and 1987.

Christoph Schenker is an art critic and director of the Institut Medien & Kunst, Hochschule für Gestaltung und Kunst in Zurich.

Reinhard Mucha was born in 1950 in Düsseldorf, where he lives and works.

Helena Kontova: You’ve been Conceptual artists, then you were Body artists, and now working together you talk about “Art Vital.”…