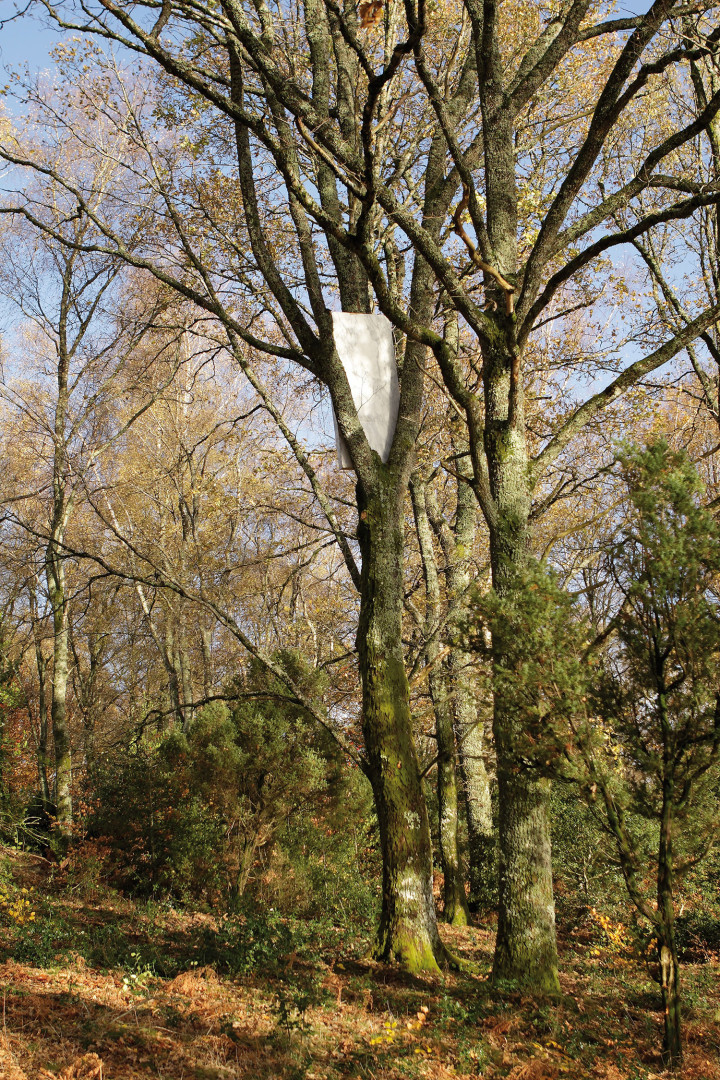 With titles such as City without a Ghetto, Glassed Slab, Panel, On a Hilltop, Catchment System, 1:1, Water Wall and Locked Room, Oscar Tuazon’s installations are clearly located at the intersection between sculpture and architecture.

As sculpture, they retain formal concerns regarding volume, balance, tension, space and materials. Handcrafted elements work in concert with an Arte Povera sensibility for simple elements found in nature. There is also a sense of minimalism’s interest in raw, industrial materials, as well as the DIY spirit of the bricoleur. As architecture, they have roots in utopian concepts of simple and sustainable living: dwellings cut down to the bare minimum in order to achieve an idealized freedom from the constrictions of a society organized around commodification and accumulation. In Tuazon’s words, “Architecture doesn’t start with function; it starts with an idea.”

In 1984, Dan Graham — another prominent utopian — put the Shakers — the early American religious sect known for its philosophy of simplicity, self-reliance and spare, handcrafted architecture and furniture — at the center of a comparison between rock music and religious rituals in his seminal “Rock My Religion” (1982-1984). Both Shakers and rock ‘n’ roll rites expressed a liberating DIY lifestyle. In Tuazon’s work as well, rituals have an essential role, though not always evident in the final works because this aspect takes place far from the exhibition venue, often in remote sites and at an early stage of the work’s conception. Also for this reason, it is in the nature of Tuazon’s work to be shared with colleagues and to find expression in a number of diverse contexts. At times an artist, a publisher and a curator, he often works collaboratively. In Paris, where he currently lives, he and a group of critics and curators run the gallery castillo/corrales and its more recent branch, the bookstore Section 7. With Metronome Press, a publishing house also partly connected with the castillo/corrales crowd, he published Unhouse – The Architecture of Dwelling Portably (2007), a book where he recounts his search in the forests of Oregon for Bert and Holly Davis, two resolute hippies who, for decades, lived without permanent residence and published the legendary zine Dwelling Portably, a manual of survival with tips for the modern nomad.  Unhouse was the result of a trip Tuazon took a year earlier with curator Clémentine Deliss (also co-founder of Metronome Press) and two other associates. Together they traveled in an RV for two weeks, covering two thousand miles through the backroads of Oregon in search of the Davis’s, built a primitive shelter out of mud, and wrote while on the road their own version of Dwelling Portably [Metronome No. 10. (Oregon), published as part of the Documenta 12 magazine project in 2006].

Taking to an extreme the idea of experiencing life far from urban settlements and art venues, Tuazon, together with his brother Eli Hansen, engaged in a venture in the wilderness of Afognak, an uninhabited snowy Alaskan island close to Kodiak Island. In the course of ten days, armed only with a few utensils and what they found in their surroundings, they crafted a shelter — a basic domicile, reduced to its bare essence. Kodiak (2008) is both a personal, metaphorical experience of sheltering and the narration within an exhibition space of that shelter. Indeed, in a second part of the project at the Seattle Art Museum, the artists evoked this quasi-domestic environment through sparse sculptural and architectural elements such as a window, a staircase, a beam, a lantern and a water tank. The museum installation is like the memory of a dream: it selects bits of information and highlights details. The fragments are the meaningful parts, while the big picture is merely suggested. It is this gap between the sculptural reprise and the remote emprise that animates the work. ‘Habitat’ is here reintroduced as one of the main topics of a range of cultural models — nomads, hippies, survivalists, refugees, visionary architects, utopian free spirits — bringing to mind Henry David Thoreau’s 1854 memoir and philosophical work Walden.

Tuazon’s work is not always anchored to performative expeditions. In his most recent works he concentrates on more sculptural problems. Lately, in a major solo exhibition (“Bend it till it breaks,” 2009) at the Centre international d’art et du paysage at Vassivière Island [France] the two recurring tropes of Tuazon’s work — nature and architecture — were explored within atypical postmodern museum architecture designed by Aldo Rossi. Tuazon intervened in both outdoor and indoor spaces. The main work shown, in a long nave-like hall, is a large structure reminiscent of a construction site. Yet the industrial materials adopted — concrete and wooden beams, concrete slabs, block and tackle pulleys — are assembled with nonfunctional purpose and in an unconventional way. For instance, concrete beams are suspended horizontally, held aloft by pulleys. These elements are combined with no other mission than to sustain each other in a dysfunctional, implicitly critical way — to challenge the laws of gravity, the materials’ resistance to pressure, tension, unbalance. It’s a heavy, seemingly uncomplicated construction that is troubled by its very essence of vulnerability and insecurity. Tuazon has similarly experimented with material properties in Tonapah (2008): a precarious floating structure he created for a solo show in New York at Michele Maccarone’s gallery. A bulky body made of steel beams, concrete and wood planks was partly suspended from the ceiling by pulleys, threatening immanent collapse from excessive weight. There’s an echo of Robert Smithson’s uprooted tree paradoxically planted upside down (Upside Down Tree, 1969) and a sense of decay and ruin by way of Gordon Matta-Clark’s 1970s incisions into the symbolic foundation of our civilization, the house. In Tuazon’s Tonapah the ideas of strength and fragility co-exist: what apparently looks strong reveals itself as vulnerable, with the same sense of failure and uncertainty that charge our times. Tonapah’s sense of pending collapse provokes a physical reaction of discomfort — one not unlike another peculiar project: in “dragged down into lowercase,” an exhibition conceived by Tuazon and Deliss (Zentrum Paul Klee, Bern, 2008), eleven artists were invited to realize works to be shown in a site below ground level. This time uneasiness was not caused by a hanging object, but by confinement, also playing off the more abstract notion of ‘underground.’

Excavating, challenging gravity and the limits of materials, adventuring into unknown lands: these are Tuazon’s ways of reminding us that we have the freedom to imagine and shape our own lives. Thoreau’s conclusions at the end of Walden seem still valid today: “I learned this at least by my experiment: that if one advances confidently in the direction of his dreams, and endeavors to live the life which he has imagined, he will meet with a success unexpected in common hours. He will put some things behind, will pass an invisible boundary: new universal and more liberal laws will begin to establish themselves around and within him […].”

Tuazon’s work, too, is simultaneously realistic and idealistic.

Oscar Tuazon was born in 1975 in Seattle, Washington. He lives and works between Paris and Tacoma, Washington.