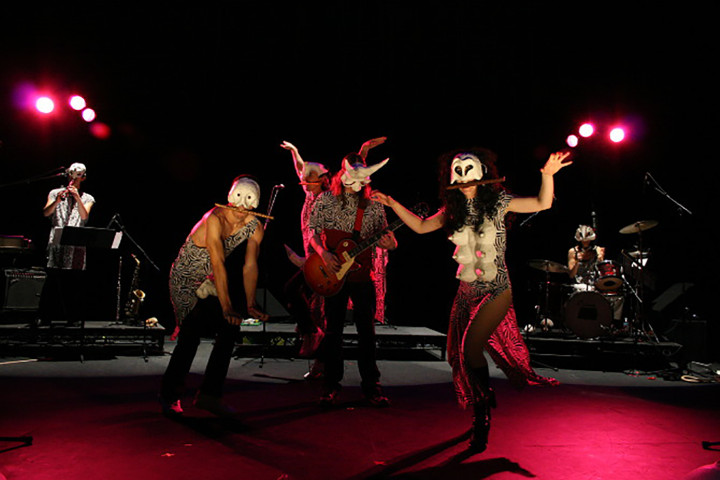 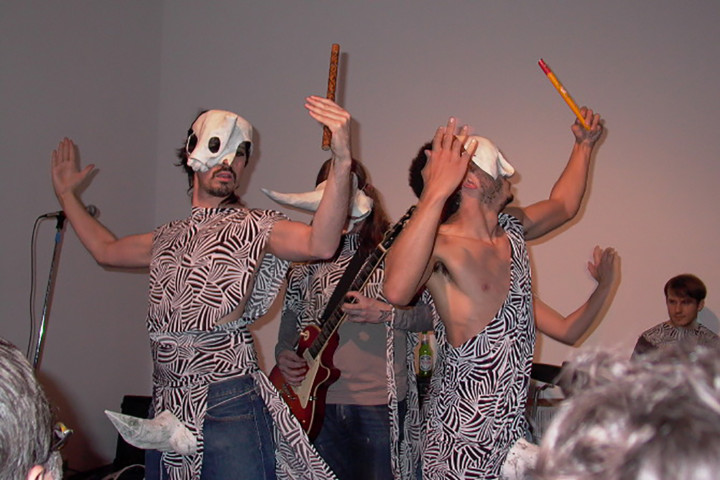 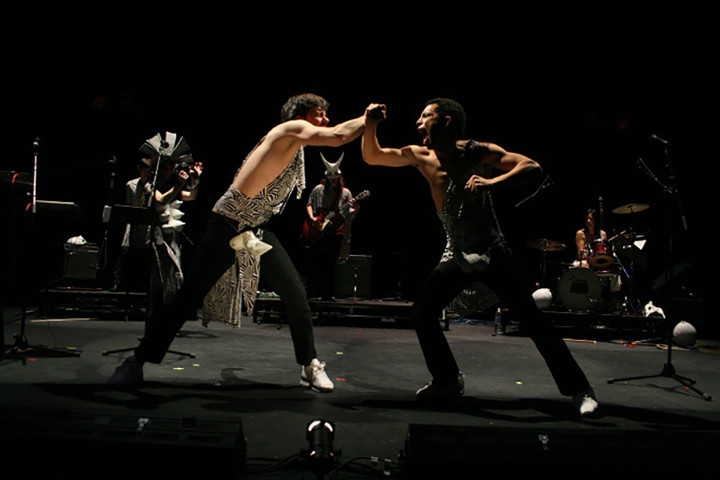 My Barbarian’s newest showcore rock opera is a tragicomedic farce offered in the tradition of classical Athenian plays performed at festivals held in honor of Dionysius. Presented as part of the performance biennial “Performa05,” You Were Born Poor & Poor You Will Die comes complete with satyr-interlude, phallic props, human sacrifice, volcanic eruptions, and a rock/Bull God. It is signature My Barbarian — a fantastically campy conflation of mythology, art and social critique with biblical narratives thrown in. An earlier piece, Pagan Rights (2005), was a “musical vision quest” made in response to the rise of Christian fundamentalism in the U.S. It opened with hooded druids participating in a virgin sacrifice and ended with a pagan ritual. In between, its cast of characters included Arthurian legend Morgan Le Fay, gay marines, and drug smuggling cruise ship entertainers.

My Barbarian’s beautifully over-the-top aesthetic is often the result of collaborations with other artists. MB: The Mary Blair Story (2004), inspired by the creator of the animated Disney versions of “Peter Pan” and “Cinderella,” featured sets and costumes designed by Lara Schnitger and Matthew Monahan, including a patchwork Big Ben. Pearl Hsiung created medieval-spandex costumes and set pieces for Web of the Ultimate (2004), a residency project at the MAK center — a former house, studio, and salon designed by Rudolf Schindler in Los Angeles. One of their two videos, Morgan Le Fay (2004), was shot at the house. This and Unicorns L.A. (2004) capture the magical quality of their performances with low-key special effects like bursts of light from tossed capes, shrunken and collaged characters running across the screen, and lots of layered fades.

You Were Born Poor & Poor You Will Die includes instruments, masks, phalluses, and headdresses designed by Jeff Ono. The show opens with band members soliciting the audience for spare change for his gourd-like surrealist sculpture/instruments. Standing on two small stumps, each instrument has a mouth-like opening at the top. Rounded and white, they seem almost like elemental representations of hunger. Simultaneously they recall Lucio Fontana’s transgressive penetration of painting’s surface and suggest a kawaii-version of 1970s feminist art’s central core imagery. In You Were Born Poor & Poor You Will Die they are part of a design that includes diamond-faceted upturned phalluses made from dollar bills, a six-nippled breastplate, and a horned mask for The Bull-God, who, with his guitar/phallus/cross is also the ‘microwave minotaur/Moloch.’

Tragedies, according to Aristotle, purge us of fear and pity. In line with this definition, You Were Born Poor & Poor You Will Die induces catharsis. Like other My Barbarian performances, it is an exorcism of the fear, alienation, and monoculture rampant today. Described as a “ritualistic incantation of class warfare,” it uses sacrificial rituals as a stand-in for “the social blood-letting of late capitalism.” But, lest we get too serious, it should be noted that a My Barbarian catharsis is that of seeing the sun rise after a night at the disco — theatrical, glamorous and poignant — not the catharsis of twelve-step programs or finishing your first marathon.

In 2004 Malik Gaines and Alex Segade, two of the five members of My Barbarian, co-authored a re-examination of Susan Sontag’s “Notes on ‘Camp.’” In what must have been a particularly morose moment they wrote, “There have been moments in which fleeting feathers of Camp encouraged political agency via an exposé scandaleuse, an unaccountable discrepancy, an elucidating mockery. These moments too are contradictory. And these moments are gone.”2   My Barbarian is, of course, one of the main examples of how those moments are not gone, of how camp is still actively promoting a DIY resistance against the homogenization of the status quo.

My Barbarian was formed in Los Angeles in 2000 by Malik Gaines, Jade Gordon, Andy Ouchi and Alexandro Segade.

Damián Ortega makes sculpture with different techniques and materials, and with a special interest in creating ‘new engineering’ for preexistent…

Last year, an overdue first survey exhibition of the work of Los Angeles-based artist Tim Hawkinson — co-organized by the…