The second chapter of Gargantua consists of fourteen stanzas of nonsense verse, a slapstick parody of Roman mythology and history that Rabelais casts as “Antidotal Jokes, Found in an Ancient Tomb.” There’s “fresh butter, falling like a shower” on Gaius Marius; Hercules skins a crow. “Why not call me?” asks Minos. The figures appear momentarily and recede in a maelstrom of unpredictable objects. The fate of a “slimy fool”:

He was just about to read the chapter
When all he could find there was a pair of calf’s horns.
“The bottom of my bishop’s staff (he said)
Is so freezing cold that my brain’s gone icy.”
They warmed him up with turnip fragrance
And he was happy to stay near the fire,
On condition that a harness was clapped on someone
Else, from the crowd of crazies all around.

And finally, he who was fashioned of wax
Will live at the door hammer’s door. And the jumping
Jack who tends the potbellied kettle
Will never be called “My Lord, My Lord.”
Ah, if you got your broadsword out
You could put an end to this swarming mess,
And then a spool of good thick thread
Could bind up all this rotten stuff.

Probably the best joke is the translator’s note that appears in Burton Raffel’s 1990 rendering of the text: “‘We’ve understood almost nothing of this,’ observes M.A. Screech.”[i]

No, Rabelaisian carnival isn’t an immediately obvious analogue to the work of Michael E. Smith (b. 1977, US), which instead depends on precision, space, and quiet. But you might say he uses those very elements to bind up rotten stuff. And his sculptural installations are often, to my eyes, funny, although the jokes can’t really be explained — jokes about which you might say, “We’ve understood almost nothing.” He likes to make objects unpredictable, wants to make your brain go icy.

Consider this: a preserved blowfish affixed to the wall; its spiky belly facing out, the creature looks up, as if in rapture. A pair of old pliers is suspended from the tailfin, presumably held there by a magnet concealed within the fish’s rudder, which the tool touches only briefly at the edge of its curving metal jaw (Untitled, 2017) 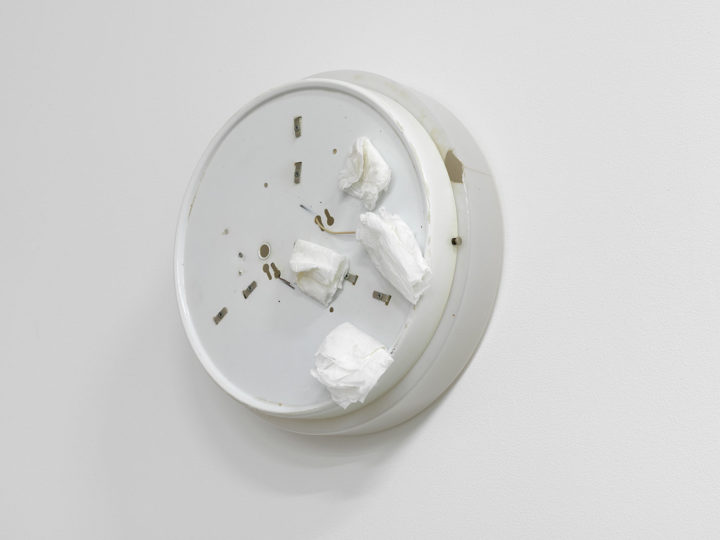 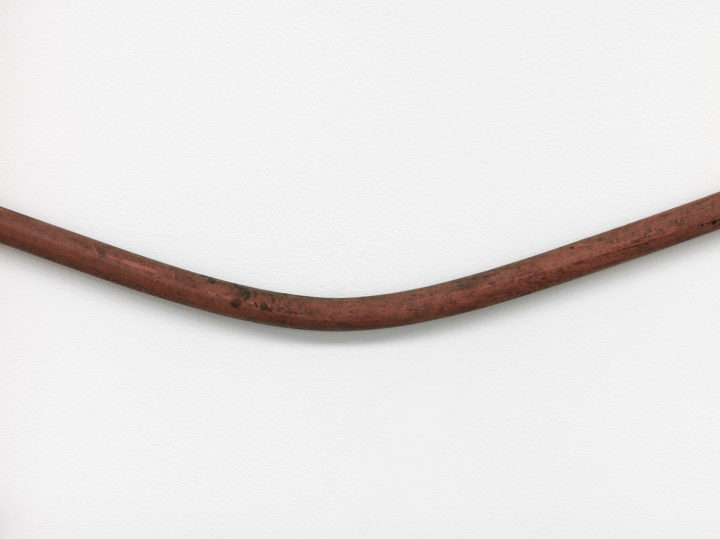 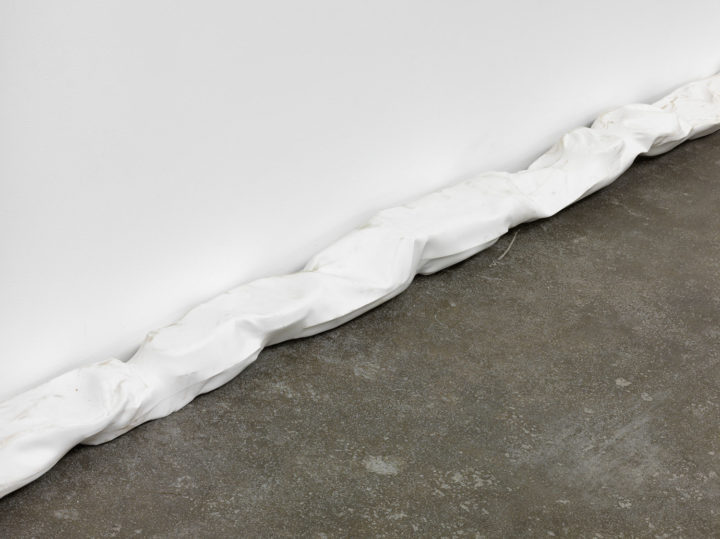 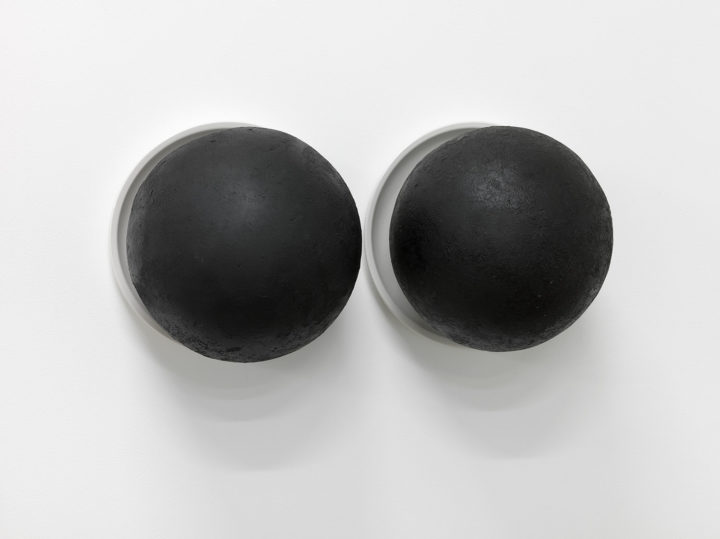 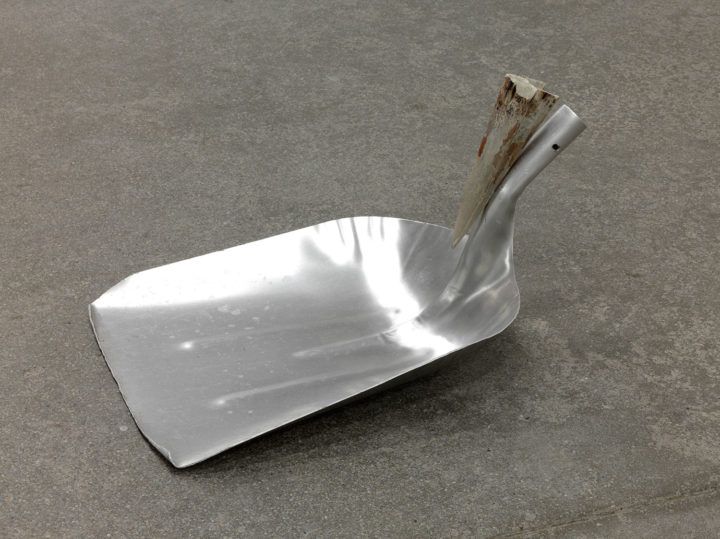 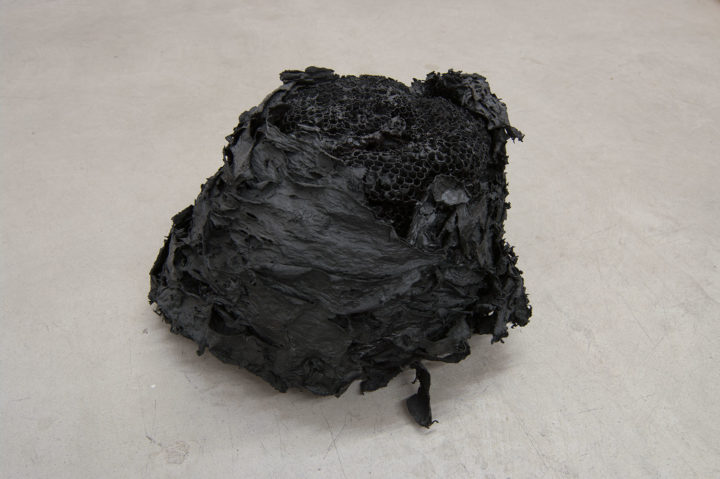 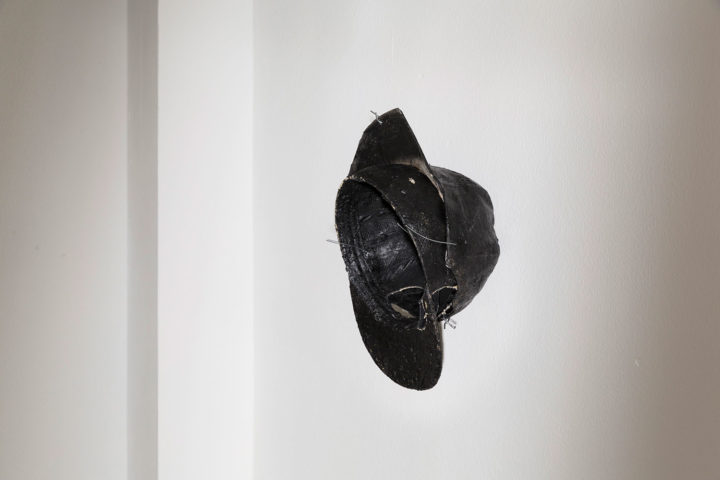 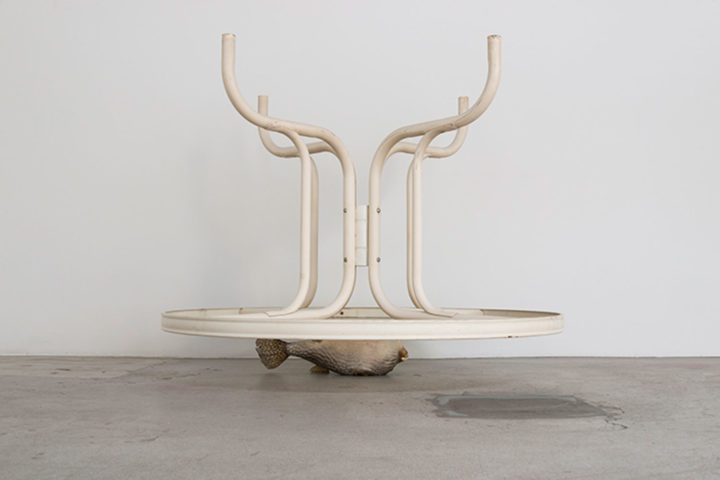 With unlikely pairings and placements of things, Smith’s sculptures recall the anxieties and desires of an earlier era, when such curios were sometimes extolled for their capacity to reenchant, for allaying the deadening effects of routinization and industrial production. For André Breton, writing in 1936, the Surrealist object was a salve for our perceptual paralysis induced by “the stultifying proliferation of those objects that impinge on our senses every day and attempt to persuade us that anything that might exist independently of these mundane objects must be illusory.”[ii] I’m not alone in hearing this echo, though it is more often Viktor Shklovsky’s notion of “defamiliarization” that we find mobilized in discussions of works of art that, like Smith’s, rely on the appropriation of found objects. But it isn’t, as we shall see, necessarily a great fit. Firstly, for Shklovsky, writing a decade before Breton, making things strange was not so much an aesthetic strategy as a fundamental duty of art.

The object passes before us, as if it were prepackaged. We know it exists because of its position in space, but we see only its surface…
And so, held accountable for nothing, life fades into nothingness. Automatization eats away at things, at clothes, at furniture, at our wives, and at our fear of war…
In order to return sensation to our limbs, in order to make us feel objects, to make a stone feel stony, man has been given the tool of art. The purpose of art, then, is to lead us to a knowledge of a thing through the organ of sight instead of recognition.[iii]

Notwithstanding the rather high bar of returning life to life, the sculpture I describe above might not quite meet the measure of a defamiliarizing object for another, practical reason: a blowfish is hardly a thing habitually perceived. I mean, just look at this breathless description from an Etsy seller offering seven-to-ten-inch specimens for only $14.95: “One Taxidermy Real Preserved Dried Large Puffer Blowfish Porcupine Fish Animal Specimen Macabre Horror Decoration. These are stock photos, you will not receive this exact puffer fish but one very similar. This thing is pretty crazy looking taxidermi [sic].” You can’t make strange what is already strange. Smith has a predilection for such “macabre” specimens — hornets nests, birds, sea creatures — often, as above, combined with less “crazy looking” stuff. There are also quite a lot of common or cheap commodities, or bits and pieces thereof: segments of hoses, pipes, diapers, pens, lawnmower handles, boiler, cooler, baseboard heater. Synthetic ingredients — plastics, foam, resin, rubber — sometimes embellish these items to such a degree that we wouldn’t know what we were looking at without the aid of a checklist: milk jug, urethane foam, enamel, turkey leg (Untitled, 2012); altered weed trimmer, oatmeal, plastic (Untitled, 2012); wasp nest, rubber (Untitled, 2012). But with Smith’s collecting, pairing, dressing up, and staging of these things, even where he most legibly preserves them — as with a favorite, men’s athletic apparel, often made stiff with plastic or resin — the effect, rather than undermining or rebooting the senses, is something closer to novelty. I don’t mean that in a pejorative sense. The sculptures are epigrammatic — captivating and inscrutable — built on the premise of the infinite combinatory possibilities of the close at hand. They occupy the space of sculpture, assume a sculptural mien, puff out their chests like puffer fish, but they refuse to foreclose the possibility that these idiosyncratic combinations and treatments are nothing more than what used to be called mash-ups: Look what happens when you pair this with this. At PS1 a few weeks ago, I watched as a fog machine periodically exhaled into a black sweatshirt, the vapor momentarily hovering about the supine garment, like a spirit leaving the body, and then dissipating (Untitled, 2017).

Characteristic of Russian Formalism, Shklovsky’s discussion leaves little space for history, but the question of historical transformation is critical in assessing how Smith’s novelties operate. The reworking and recontextualizing of appropriated objects is, of course, a now long-familiar strategy, tracing a history through the anti-retinal readymade, assemblage, the disavowal of aesthetic judgment and authorship of the 1960s, and so on. We may be overdue for a crisis of the found object, similar to the periodic crises of painting. Smith’s work then might be better understood in relation to the ideas of a colleague of Shklovsky, Yury Tynyanov, who, in his analysis of parody, argued for a dialectical understanding of literary succession. Aesthetic techniques — devices in the nomenclature — are “mechanized” in subsequent parodies and there combined with “new material.”[iv] Perceptual reanimation is no doubt an inapt burden for a work of art in the twenty-first century, and our blowfish and wrench is not merely a parodic rebirth of the author, or reinvention of the Bicycle Wheel, but also poses the question of the dynamics of “new material” — the relationship between these art objects and the historical present.

Perusing, on the page or on the screen, Smith’s body of work, you could come away with the impression of a contemporary Wunderkammer stuffed with relics of nature and synthetic techniques: a late-capitalist theater of the world. But to see them in situ is another matter altogether. He installs his shows with exactness and extreme economy. Emptiness encompasses the sculptures. (The cover of the catalogue for his 2013 show at the Ludwig Forum is a photo of an empty gallery.) Smith often alters the lighting to subtle or dramatic effect, rendering each creation a tableau. As opposed to navigating an elaborate scene, as you do in the installations of Cathy Wilkes, in Smith’s exhibitions you move through a space quiet and vacant, encountering sculptural moments of stagy deadpan. And whereas an artist like Danh Vō, who sometimes works in the curation of found objects, situates his installations in extensively spelled-out autobiography, Smith’s enveloping emptiness comes across as a blank page, an environment that anticipates exegetical false starts, that dares you to decipher. In fact, this sparse theatricality complicates another claim often made for Smith’s work: that it is about capitalist overproduction and, therefore, crisis. But while the “stultifying proliferation of objects” indeed marks the condition of possibility for Smith’s art, the upside-down circular patio table resting on a taxidermied fish in the corner of an almost-empty room speaks less to excess than to heightened specificity, and indeed to a mysterious or private logic (Fish Oil, 2017). Smith, we are told, is painstaking with his installations, spending long periods in a space, feeling things out and intuiting precise arrangements. Many of the sculptures only take their final form during these hours of creative gestation. The viewer’s entire experience of the exhibition is overwritten with inaccessible subjectivity. These are inside jokes.

Even with a work such as a black hoodie entirely folded up and stuffed within its hood and mounted on a wall (Untitled, 2014), bringing to mind a litany of concealments and monstrosities of hoods past — the executioner’s, the Klansman’s, Trayvon’s — we see this as just a happenstance of signification: “the world is full of objects,” as Douglas Huebler famously said, and the world is full of ideas too; sometimes they’re bound to bump into each other. As Smith’s work resists interpretation, discernible meaning is constantly deferred in favor of pattern recognition. There are only recurring preferences, affections for certain kinds of things: sweatshirts, fish, tools. There’s a style to which we might attach any number of captions: eerie, gritty, apocalyptic, macabre, horrific, decorative. For Shklovsky, aesthetic encounters were a remedy to our habitual non-aesthetic experiences with the world, but it is an axiom of the present that the former (art) is unavailingly dependent on the latter (the world), even while it retains a few rituals and routines to call its own. Meanwhile, aesthetic experience has become so diffuse, so generalized, that it can hardly be seen as the exclusive province of art (if indeed it ever was). People speak quite a lot about curating experiences, your everyday life, yourself. There are countless books, articles, blogspots, and Instagram comments devoted to these themes. Connoisseurship, for a certain class of people, dictates everything from coffee to childrearing. Gurus tell you that you should take each object that you own in your hands, and if it doesn’t bring you joy then throw it away. I like to think of someone decluttering, striving for minimal living, holding up a hamster ball filled with foam (Untitled, 2017) and thinking, now this brings me joy. Smith’s work is deftly in and out of tune with exactly these ideologies of object and experience, and the embarrassment it creates for art.

This, to me, is the source of much of the humor in his slapstick pairings and non sequiturs. A parody of art and a comedy of manners. As well as a discursive vacuum, those empty spaces might just be echo chambers for laughter. Because if you have to explain it… 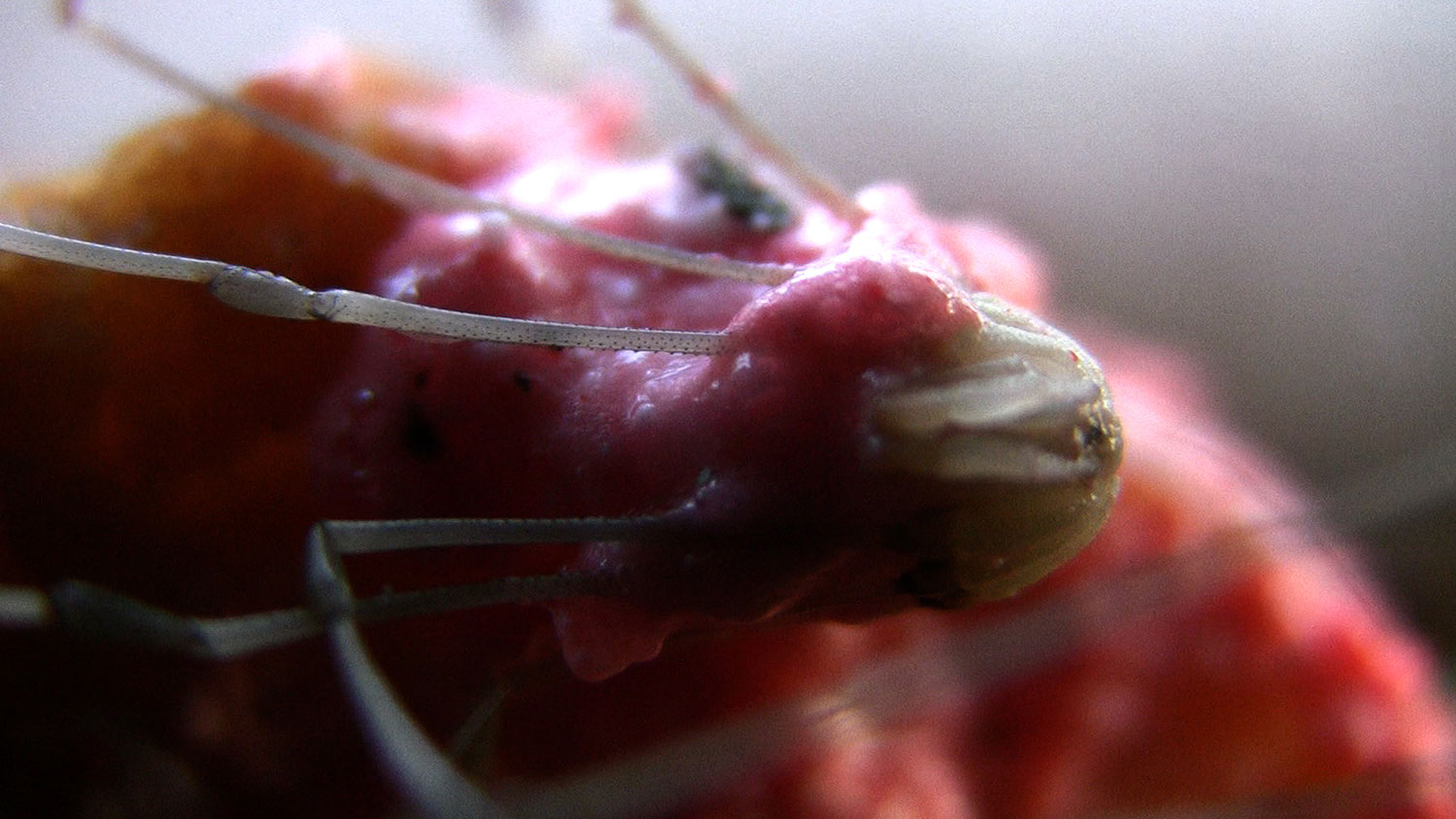 What does my body know of photography? — Roland Barthes The opening moment of Quentin, a 2010 video by Josh… 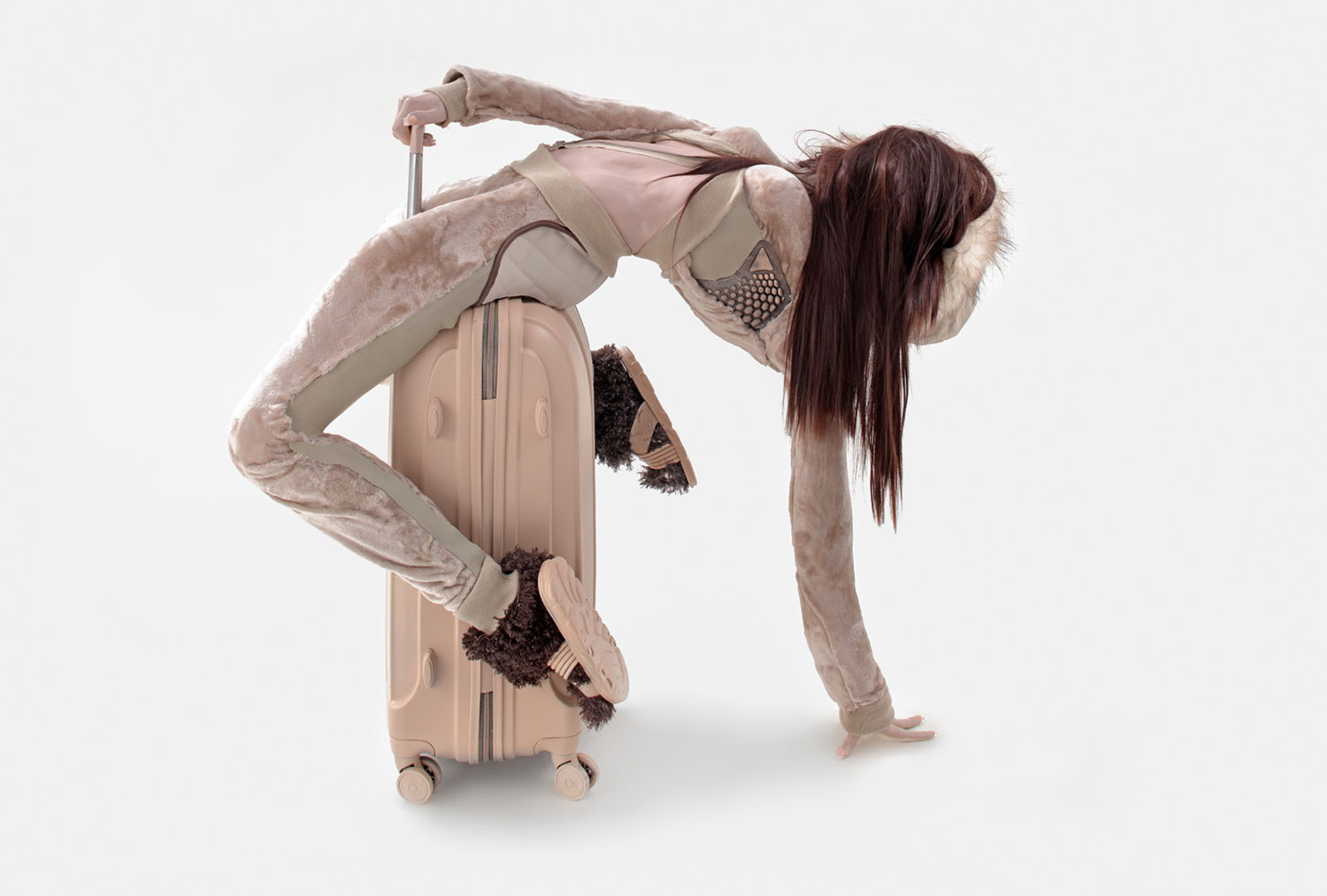