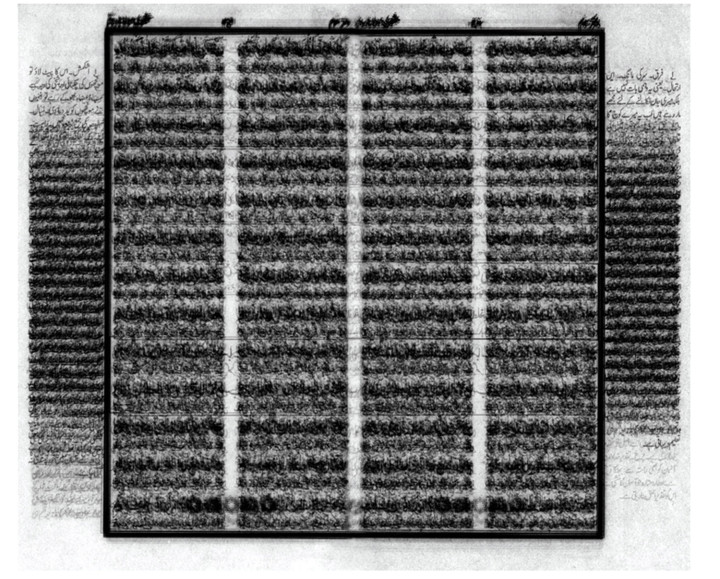 Catherine Borra: You trace genealogies that link your personal position to a stream of histories. In your early works you approached the history of art and of photography, as testified by your works on Barthes, the Bechers and Susan Sontag. Can you explain how different trends of influence start manifesting in your work?

Idris Khan: I think there is a clear sense of empathy, a fascination for what the labor of a lifetime might represent. Aside from the archival photographic projects by the Bechers that represent many years of labor, consider my piece every … Nicholas Nixon’s the Brown Sisters (2004) in which a single portrait of his wife and her sisters, taken annually over a period of thirty years, traces the effects of age and experience on the sisters’ appearance and their relationships to one another; or my piece on Rembrandt … By Himself  (2006), which brings together all of Rembrandt’s famously penetrating self-portraits. every … stave of Frederick Chopin’s Nocturnes for the piano (2004) pays homage to a group of compositions which span the length of Chopin’s productive life and the evolution of his style. Sometimes it is not the full span of a life that I am interested in, but the accumulation of experience in late works by great artists and thinkers. My choices of subjects are highly particular and seem to fall into my lap. I am searching for a kind of sublime that would have suggested something very different if I had chosen to make images of blogs or tabloid newspapers.

CB: How are you structuring your second solo show at Victoria Miro?

IK: The show will consist of two large sculptures and around four photographs. Seven Times is a large-scale floor installation that consists of 144 oil-sealed steel (almost cubes) that resemble the Kaaba. Each cube has been sandblasted up the side and across the top five times, each with different sections of the daily prayer that Muslims perform five times a day. This will form a line through each row to give the piece a further linear dimension. Listening to Glenn Gould’s Version of the Goldberg Variations while thinking about Carl Andre is a sculpture that consists of 30 plates of steel. Through the center of each row of steel runs a continuous line of music (in this case the Goldberg variations) layered by using different grades of sand and sandblasted into the surface of the steel, thus removing the layer of mill scale and exposing the pure steel, which leaves a delicate poetic mark from such a violent act.

CB: In what ways can your research be integrated by intuition?

IK: I often feel that my work is about pointing at something. Roland Barthes called it the indexical. Pointing at something with your index finger and saying: here, look at this. The photograph is a tool used to take you back to a certain point in one’s life, to remember a face or a place you once stood. I feel there is always something quite melancholic about a photograph.

Catherine Borra is a curator and writer based in London and the director of Supercream.org.uk.

Idris Khan was born in 1978 in Birmingham (UK). He lives and works in London.