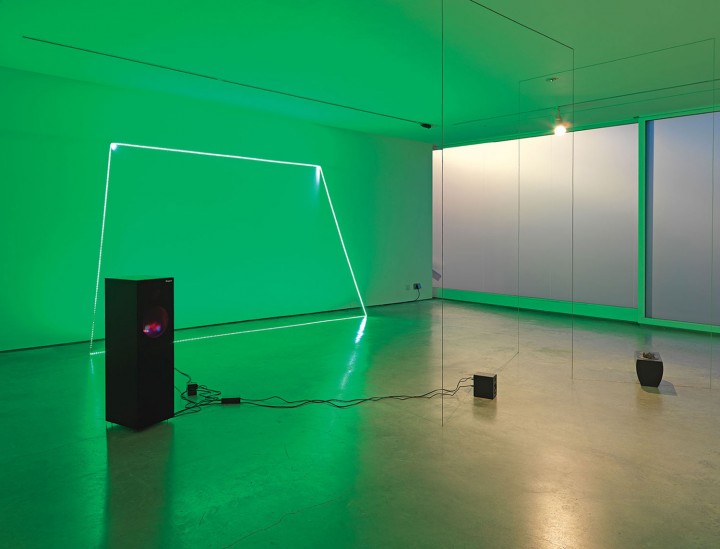 Linda Yablonsky: The first time I saw your work, three years ago, I asked if you considered yourself a sound artist. And you said no.

Haroon Mirza: I still maintain that.

LY: Yet every piece of yours I’ve seen generates a soundscape.

HM: Yes, but it’s not just a sound. You see it as well. It has a visual entity that is creating the sound.

LY: So you’re more of a visual composer, then?

HM: Yeah, I’m like a one-man band with cymbals on his head and a drum on his back. What I do is more akin to music than sound art. Artists like Florian Hecker or Max Neuhaus make only sound. I spend days figuring out what object to put on a turntable. It has nothing to do with the sound. It’s a visual thing. I don’t think sound artists do that so much.

LY: But they use sound as sculptural material to alter the space it’s in, or our perception of it. You do that too.

HM: But it’s not my primary concern. I’m not trying to transform space with sound. I’m composing acoustic space and also visual objects in that space, the way a painter would compose a painting. I think a composer is very different from a sound artist.

LY: You mentioned a turntable. How much does your DJ activity figure into your art?

HM: Quite a lot. The technique of beat mixing informs it. For a performance I did last spring at the Clocktower in New York, I made a machine to generate sound but I also made records from cardboard and tape. Put one on a turntable and you hear the rhythm of the needle scratching and bumping. So the record becomes a percussion instrument.

LY: The turntable in your current work is more like a light saber.

HM: There’s a laser on it. As it spins, the laser hits a vintage TV playing static every few seconds. The TV is connected to an ’80s computer, which is producing geometric squares on the screen. As the turntable spins, the laser hits the screen and the squares change color. In my show at the New Museum Studio 231, I also have LED lights on a two-way mirror on the back wall, generating electronic sounds. So there are four or five things generating rhythmic sound and synchronized to play together.

LY: I’m glad it’s not too loud! But what significance do turntables have for you, anyway?

HM: They’re not just any turntables. They’re Technics. They have a subtext of DJ culture. I use a turntable in exactly the same way as DJs do to mix records, adjusting the speed of the turntable to the speed of all the rhythms in the space.

LY: We’ve talked before about the great DJs in New York in the ’70s. You’re thirty-five. How did you come to know that history so well?

HM: When I started using turntables, I wanted to know the typology. DJing — beat mixing — came out of turntables with pitch control, which made it into more of an art form. So I wanted to find out how that emerged. In doing that, I learned about the Loft, the Paradise Garage and the Sanctuary, and all these places in downtown New York. Some DJs, like David Mancuso, never did beat mixing. He played records from start to finish and just wanted the best sound. Larry Levan was more interested in building a journey.

LY: What about the early hip-hop DJs?

HM: That’s when it became really creative. They created the term “turntablism.” The other guys were just playing music. These guys were creating music by scratching and layering. They created new techniques, new sounds from two records. And they all used Technics turntables.

LY: When did you start DJing?

HM: At sixteen, in my bedroom. Then I started doing parties. When I was at Winchester University doing undergraduate painting, I DJed part-time at clubs.

LY: When did it become fused with your art?

HM: I started using turntables just to make something spin. By the end of undergraduate school, I was making sculpture — fabricating things, not using existing materials. I started doing that when I went for my MFA in design. I was interested in making art but not in art itself. It didn’t do anything in the world. You couldn’t engage with it physically. It doesn’t have a utility. So I thought if I did design, it would help.

HM: Yeah. I understand that now. You go to a gallery and you don’t touch anything. You just look at the work. It’s not physically interesting but I was never interested in interactive art. I thought it had to enter everyday life, and design was a way to do that. Not that I did it, really.

HM: I still feel the same way. When you go into a space and listen to music, you can only hear it in the space and you can see what’s creating the music, and that solves the problem I had with it. It’s more instantly engaging.

LY: What about the angled, foam room you built for the Arsenale in the last Venice Biennale, the “National Apavilion of Then and Now.” It was a dark, padded cell, very claustrophobic, that enveloped you entirely. You saw a very bright light flash and heard a loud buzz or snap.

HM: You only saw and heard that, nothing else. The idea was to limit two of your senses — hearing and seeing — so the experience becomes more intense. And when it ends, abruptly, it leaves a pattern on your retina and a slight sound in your ear. It’s the most minimal work I’ve made, the most simple, basic description of it.

LY: I found it to be very aggressive.

HM: Yeah. Even the architecture of it, the pointed foam, looks aggressive. At the same time, it was probably the safest place you could be in the Arsenale. Because it was foam.

HM: No. Limiting two of your senses is not a comforting thing.

LY: Your other work in the Biennale employed desks and filing cabinets.

HM: I want something to perform a function. So a cabinet might hold things, a turntable will spin something around. The means always supports a structure that creates a sound.

LY: This title of your New Museum show is “Preoccupied Wave Forms.” What does that mean?

HM: This exhibition is a consolidation of three others I did recently, each occupying the spaces I showed in. One was “Occupied MUMMA,” at the University of Michigan Museum of Art. Next came “Occupied K-9000” at Kunsthalle St. Gallen in Switzerland, and the other was “Occupied scheringstiftung” in Berlin. All the titles were typographic symbols — forward slash, back slash, brackets, etc. They created images of waveforms, but they’re also codes. The show at the New Museum is an unraveling of those codes.

LY: One piece looks a little like a Fred Sandback.

HM: It’s not a direct reference. I’m looking at ways to install material that’s long and thin. Sandback did that best and reduced it to a bare minimum by working with a similar material, yarn. I’m using LED tape, which creates two planes. In St. Gallen, it made a dramatic architectural shift, and turned pillars into the edges of other surfaces. At the New Museum, I’ve connected two columns with LEDs to create the illusion of a solid space between them.

LY: It’s pretty cool. What’s the most ambitious project you can imagine doing?

HM: I went to see Einstein on the Beach recently at the Barbican. Something like that is incredible because it’s so many things coming together to create a complete audio-visual experience. It’s inspiring. I’d love to do something like that, or music videos.

LY: Are you saying that you want to be a theater artist too?

HM: I did a twenty-minute adaptation of Samuel Beckett’s Krapp’s Last Tape at the Chisenhale Gallery and again in Glasgow, at the Arches — which used to be a nightclub. The script consisted of lyrics that Ian Curtis wrote but that never became songs, and it was performed by an actor with a tape recorder. He was at a table in the middle of the room with a sculpture next to it doing a constant rhythm, and you could walk right up to him. There was no fourth wall. It was more an installation but it was kind of a theater piece too.

LY: What distinguishes you as an artist today?

HM: There are loads of artists before me who did something similar to what I do. Max Neuhaus, John Cage, Karlheinz Stockhausen. They were musicians who pushed music to its peripheries and entered visual art space. I’m the opposite — a visual artist pushing visual language to the edge of music, and entering acoustic space. It doesn’t have a beginning or end, and every time you enter the space it’s a different experience. That’s not designed. It’s the nature of it.

Linda Yablonsky is an art writer and novelist. She lives and works in New York.

Haroon Mirza was born in 1977 in London, where he lives and works.

Donatien Grau: You started working as a gallery director for Anthony d’Offay. Sadie Coles: First I had a museum job.…

Wendy Vogel: You’ve been a collector for years, and in May 2012 you opened a gallery in New York’s Upper…

Flash Art invites a selection of some of the most dynamic Turkish galleries, institutions, curators, collectors and artists to give…

If I say “pumpkins and turbans,” the first thing that comes to mind might be the edible squash called a…