“The beauty that addresses itself to the eyes is only the spell of the moment; the eye of the body is not always that of the soul” — George Sand

Francesca woodman’s photographs call up a host of contradictions: pleasure and pain, sensuality and starkness, transparency and solid form, flatness and multi-dimensionality, the frozen moment and the continuity of real time. Produced over the course of nine years from 1972 to 1981 (between the ages of 13 and 22), they at times look like school exercises, which is not by chance since many were answers to problems posed by her teachers. But in most cases Woodman’s pictures transcend simple responses to questions and delve deeper into what it means to produce compelling and poetic images through photography, a medium that readily lent itself to her imagination and that she easily mastered. Photography, in its artistic and documentary capacities, invites a commingling of the photographed subject’s psychological state and the photographer’s eye. That Woodman was often on both sides of the camera gives her pictures an added dimension that moves beyond simple self-portraiture: they are stark reminders of how femininity is constructed and the power of the naked, female form to reveal as well as evoke desire.

During her brief lifetime Woodman produced a body of work (more than 500 negatives, contact sheets and prints) that indicates an acute and prodigious sense of herself as an artist. As a student at the Rhode Island School of Design (RISD) in Providence between 1974 and 1978, she absorbed the lessons of her professors but was not immune to the artistic trends of the moment. Undoubtedly the predominance of Conceptual and Body art during the late-1970s must have had their effects on her aesthetic choices and likely reinforced her commitment to photography. Artists associated with these movements, as well as those committed to performance and feminism, harnessed photography’s documentary potential as part of an investigation into the fundamentals of representation (Joseph Kosuth), as institutional critique (Martha Rosler, Louise Lawler), the re-examination of female stereotypes (Cindy Sherman, Laurie Simmons) or as visual traces of temporal actions (Laurie Anderson, Vito Acconci). As already noted in an early essay on Woodman’s photographs by Abigail Solomon-Godeau, she, like other women artists of her generation, must have been aware of newly emerging film theories, particularly Laura Mulvey’s ground-breaking essay Visual Pleasure and Narrative Cinema (published in Screen in 1975) and its discussion of psychoanalysis and the social formations of the self through cinematic representations of women.  These developments, as well as William Eggleston’s breaking through the color barrier in art photography, lead to a boom during the early1980s that made photography the medium par excellence for artists interested in challenging the established criteria imposed on photography as art by modernist and pictorialist traditions. Artists who were not necessarily trained as photographers began to use it as one medium among many, considering its capacity to communicate in a significant and timely fashion not unlike the stones and chalks of the early image-makers in the caves of Lascaux or the brushes and chisels of painters and sculptors throughout the history of art.

Retrospectively, artists like Lawler, Sherman and Simmons, as well as Jack Goldstein, Sherrie Levine, Richard Prince and Sarah Charlesworth, among others, have been grouped together as “the pictures generation” after the seminal essay Pictures, written by the American critic Douglas Crimp, who first published it in October (1979) and soon after organized an exhibition in New York City with the same title. Though their practices were diverse, one of the things these artists shared was that they were part of the first generation that grew up surrounded by moving images — television and cinema — and they chose photography for its ability to capture but also construct a rapidly changing vision of the world. Their work transformed, through a process that Crimp labeled “the photographic activity of postmodernism,” the overabundance of visual information found in American popular culture into compelling, critical, but also beautiful pictures. Francesca Woodman, while part of this generation and thus clearly curious in similar ways (particularly in the representation of the female body), had an aesthetic temperament that was much more rooted in the visual effects found, at first, in a kind of Victorian moodiness evidenced by the photographs of Julia Margaret Cameron, and then in the dreamy evocations of more complex levels of consciousness characteristic of Symbolism and Surrealism.

In 1977, Woodman was selected from among the best RISD students to participate in the school’s year long Honors Program in Rome. This time was to prove extremely important to her evolution as an artist, not only because of the way the city’s aesthetic splendors — its art, architecture and quality of light — influenced her work, but also because she found at the city’s flea and food markets the props, old clothes and other objects that made their way into her photographs. She spoke Italian, was already familiar with Italy and moved easily around city. Besides the markets, Woodman discovered timeworn cafes, an old pasta factory converted into studios by several Roman painters, and, near her apartment by Campo dei Fiori, a small bookshop run by two young bibliophiles. It was a place where Woodman spent hours and days and she saw first edition books and catalogues by and about Antonin Artaud, Balthus, Georges Bataille, André Breton, Isidore Ducasse aka Comte de Lautréamont, Louis-Ferdinand Céline, Friedrich Nietzsche and Odilon Redon. In addition to these and other well-known writers and artists, Woodman came across more obscure ones, such as the German Symbolist Max Klinger, who was an important influence on Giorgio De Chirico and whose series of etchings from 1881, Paraphrase über den Fund eines Handschuhs (Fantasies upon the Finding of a Glove), most likely inspired several of the images that Woodman included in her first artist’s book, Some Disordered Interior Geometries (1981). In Klinger’s etchings, one sees a narrative unfold — a glove dropped by a woman, picked up by a man who invents fantasies about its owner — that presents a surprisingly concise visual essay on fetishism (which, not coincidentally, is contemporaneous with Freud’s investigations into the unconscious and the formulation of psychoanalysis). The quality of fantasy or a dream-state evocative of sexual desire found in Klinger’s prints clearly interested Woodman, and using an old Italian geometry notebook she superimposed images of herself and handwritten texts onto the printed diagrams and geometry theorems.

When Woodman wasn’t using her own body as subject, she often asked her friend, Sloan Rankin-Keck, to act as model. The two young women met in 1975 during their first year at RISD, and Sloan became Woodman’s most faithful and consistent collaborator over the next six years — more than half of the time Woodman actively worked. Their relationship — as best friends, fellow artists, collaborators — spawned some of Woodman’s most gripping and poetic images, at times blurring, cropping and shooting the pictures in ways that masked the subject’s identity so that the two friends’ bodies became interchangeable. First in Providence, then in Rome and lastly in New York City, Sloan appears as the artist’s doppelganger: reaching for a bright, sun-like orb painted on the wall of a snow-covered street (Sloan, 1975); as an angelic figure hanging from the doorway of a Roman palazzo (Angel Series, 1977/78); or, as a cascade of blond hair falling over the edge of a lion-footed bathtub (Untitled, New York, 1979/80).

During their year in Rome (from September 1977 to May 1978), the two friends made weekly trips to Porta Portese and Piazza Vittorio, the markets where they bought the vintage clothes, fruits and fish that Woodman used for the mise-en-scènes she then photographed. Eels, or capitone, a Roman Christmas delicacy, found their way into several pictures produced that year. In one untitled print, her curved naked torso is stretched across a black-and-white patterned floor, enveloping a white bowl with a shiny skinned eel tightly coiled inside. (Woodman printed at least two versions of this image, with her body on either side of the eel.) While her form is slightly out of focus, the eel, its container and the fragments of floor tiles are stark and clear; there is a phallic quality to the fish, its black surface playing off the whiteness of the bowl and her hips, which catch the light in such a way that they seem to be glowing like the skin of the eel.

In a series of six photographs also made at this time, titled “Fish Calendar — Six Days” (1977/78), the palpable sensuality found in the eel picture is set against a more playful, humorous side. Here Woodman uses three lemons to represent the month of March and, like the pages of a calendar, each consecutive print includes one or more eels — on a table, a plate, hung between her thighs — to correspond to a specific number of days. For example, the print for March 2nd shows a marble table in the foreground, two of the three lemons on its right edge, a white plate balancing on its upper reaches with a third lemon and an eel on it. Behind the table to the left of the plate one sees Woodman’s legs covered in black vertically striped stockings, cropped at the hips, and a second eel suspended between her legs. In the calendar’s final photograph she sits naked, hugging her knees and in shadow, foregrounding the table but with her left half cropped out of the picture. The three lemons, cut and peeled, are on the table along with a single eel on the plate; the five other eels are draped across the table, their heads hanging off the front edge.  Again both playful and erotic, these photographs indicate at the same time a lightness of spirit, an acute formal sense and a witty symbolism that was all her own.

She demonstrated this spirit often during her year in Italy, which was characterized by constant conversations about books and art, intellectual stimulation and a warm, specifically Italian sense of familiarity. Friends who knew her then tell of receiving little notes, messages, drawings and small prints that she tacked to their doors when they were absent.  One of these is in the form of a recipe written in Woodman’s imperfect and coquettish Italian:

shake in the same motion as Ducasse

Cook the mixture with warmth and tenderness. If the frittata doesn’t fizz or its skin is tough it’s worth convincing it or visiting it. If on the contrary the frittata/omelette is loose or too sensitive give it a round word and a special or rather little caress to convince it to correct itself. Also a bite on the edges. This frittata seems tiring but is delicious and very nutritious. It can last for a long time and it’s tasty if kept warm and treated well. Enjoy!

Elizabeth Janus is an art critic based in Rome.

Museum space is transformed into absolute chaos. A clothing line with clean clothes hangs between two walls, underneath it… 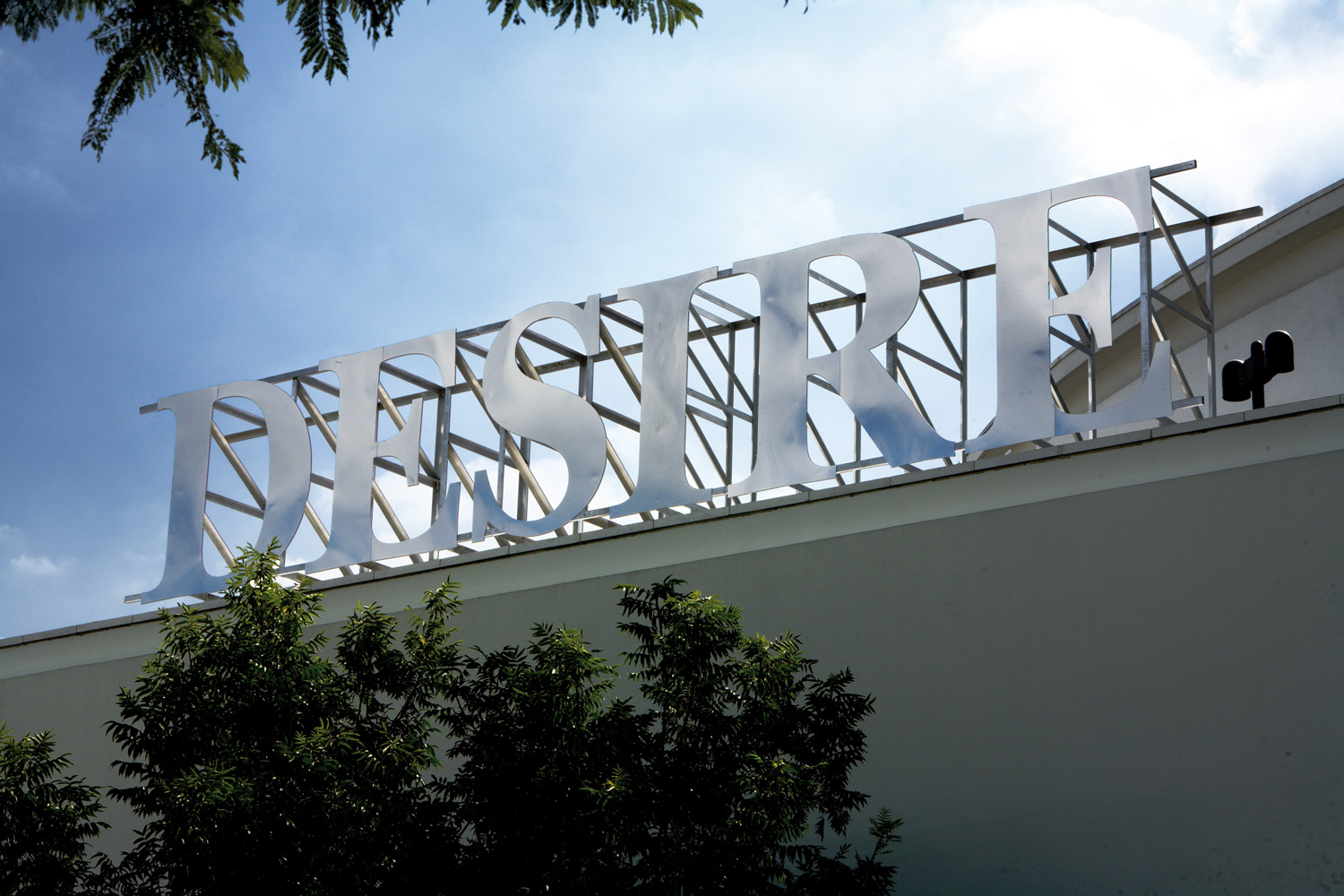