I’ve been asked to write something about my work. So I’m jotting down some notes here. I’m calling them “captions” to explain the rough way they are written. I flatter myself that my works speak without dialectical statements that are necessarily approximate. Now that I think about it, I’ve always managed to avoid similar requests. If anything, I prefer analytical writings about my working method, since perhaps it is there, and in the best cases, that the meaning of my work is contained. I’ve always sensed an unbearable boredom and a certain apathy in almost all the artist statements I’ve read. I prefer the stimulation of an interview with all its limitations. But, you know…time, etc.

There are three stages, more or less, in my work.

During the first stage, a series of designs on cardboard introduce me to the range of design and pictorial combinations and the tone of the work that is being brought to life.

The second stage is always dedicated to decisions regarding practical matters such as the final scale and arrangement of the given media, at times depending on the size of the canvas.

The third stage is the application of paint, which is often dissociated from the dynamic nature of the structural support. Here every calculation gives way to unpredictability. 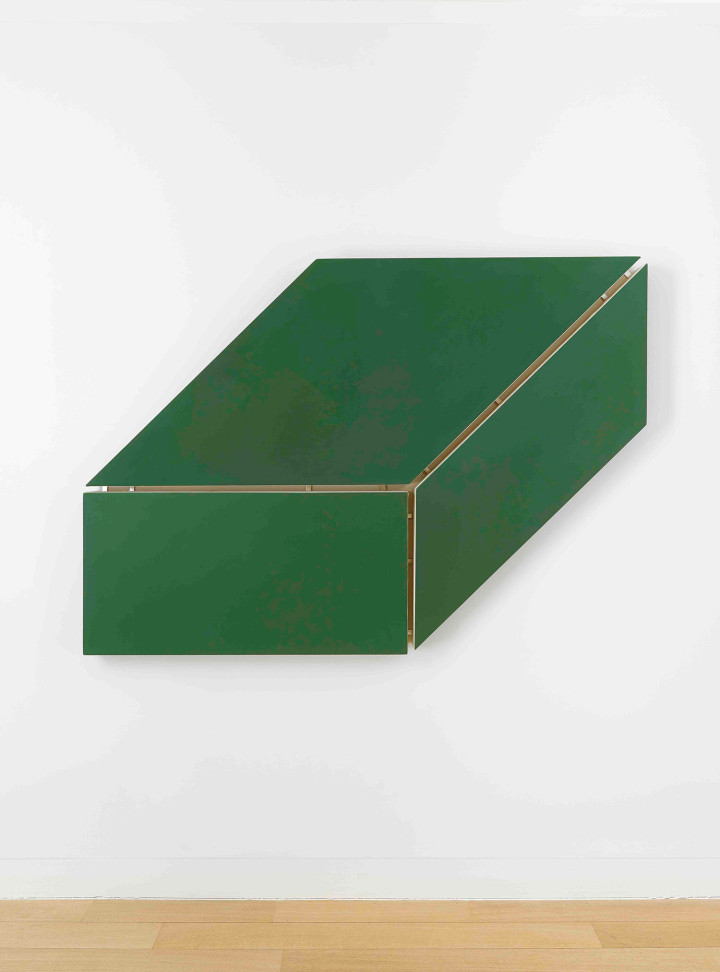 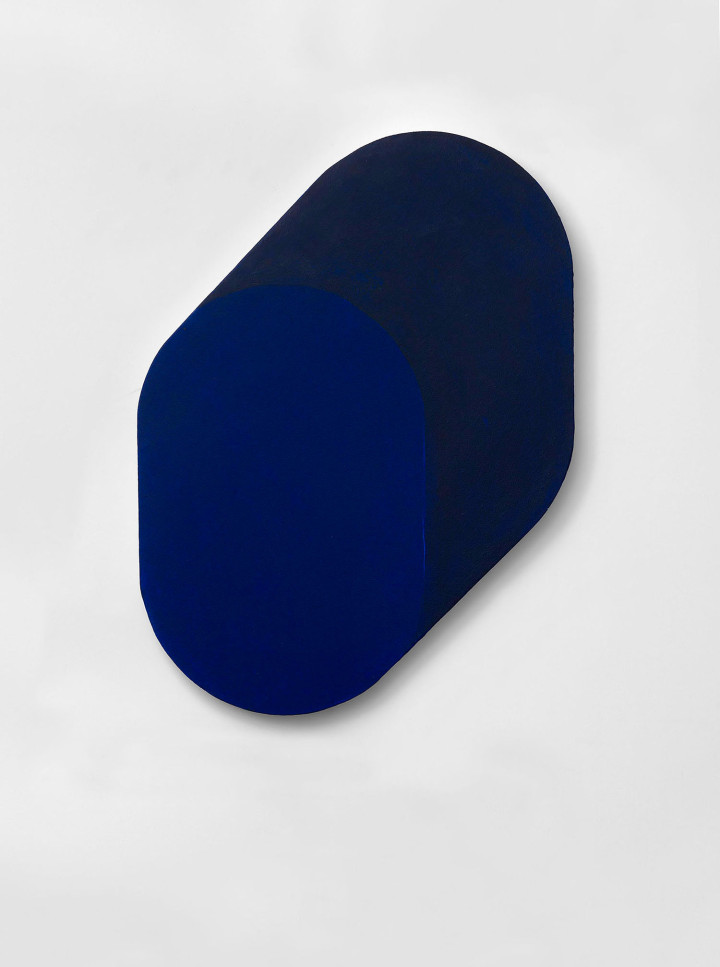 I put in a quantity of air: experience has taught me to count the strokes of pressure needed for a weak, medium or strong intensity, so as to obtain a varied spray of color.

The work is rather laborious, because after having poured the remaining paint into the vessel that contained it, I have to wash out the large pump so that it can hold the next color with as little contamination as possible from the previous color.

I pour in the new color with quite a bit of water and spray it on the canvas, which is still wet from the previous one.

And I go on like that with the planned colors or others that I decide to use as an alternative in the course of the work.

It is impossible for me to predict the behavior of machines interacting with each other, but it is precisely in this final decision-making part of the work that all the unpredictability and uncertainty come into play, things to which I am tied by a factor that I would call necessary because of its irrationality.

There is no way of predicting the end of these sequences, which range from very few to countless applications, sometimes leading to a total failure due to excessive stratification resulting in a too shiny or dull surface.

The monochrome nature of the first visual impact is still an important factor, even though I seem to partly betray it in recent works. The ratio of the values of the pigment on the canvas at close range is likely to provide a variety of vibrations due to the absorption of color in the weave of the canvas.

Then I apply cords and different strips of canvas to the surface of the painting, matching the different fabric textures in such a way as to change the influence of the watery color between them. Of all the work on the project, from the design to the stretching of the canvas to the tapes that I apply to the edges of the frame — to better differentiate the pictorial work from the uncontaminated canvas — it is the strips of cloth or bandages, the cords, that take up more time and physical labor than the actual painting.

I can say that it is as if I were immersed in a vital dialectic in which geometry acts initially through a preconceived choice, inherent in my method, as a driving force. My effort lies precisely in planning the different fields of active processes, wherein the dissonance between geometric form and visionary space takes place in the painting process. It is in this space that the consciousness of a different perspective must exercise its commitment to freedom.

Barnett Newman said, “In a world of geometry, geometry itself has become our moral crisis.” He said that the only answer to this crisis is “no geometry of any kind.” I believe in this. My commitment is precisely this attitude, which aims to make people forget geometry — not to declare it to be an expressive aspect of the poetics, but to make it be forgotten in a multidimensional space in a two-dimensional field, where there are multiple visual focuses in an active dynamic of multiple perceptions.

I realize that in all of this there is a conceptual attitude. Whereas I would like to be stripped of all intellectual obstacles, I will have to accept the limits of my contradiction.

I don’t pose mythical or ideological problems on geometry. The supports that emerge from my geometry are also a contradiction in terms of the information that is receivable according to interpretations of the overlying contamination. More simply, I would say that the random rain of paint has a contrasting relationship with the geometric boundary of the medium.

No single focal point exists in my work. Rather, the interpretation of various elements forms a vision. These are objective elements, even though some are not necessarily physical, but as concrete as an illusion (ambiguous), the application of the paint, the assembly of the supports.

The natural contamination of all the visual and mental elements produces a continuous upsetting of linguistic codes.

The medium that informs us is “visual.” The data that our eye gathers is sent back to the brain that processes the objective and linguistic codes received. I believe in this mediation of the process of knowledge; therefore I am making an artifact. It’s hard to think that there should not be a medium through which to critically examine the tools of perception; even though, while acknowledging the affirmation of the person who asserts (can’t remember the name now) that the ideal artistic medium is telepathy, I think that this too is a concrete piece of information, although not necessarily material.

My work is made of paint, canvas, wood — ancient and primary elements. I’ve always used these mediums, and for ten years now they’ve simply become mediums to be used; in other words, they’ve lost that particular sacredness that characterized them for their particular intended use in the service of “art.” For me they have no restorative meaning, as I seem to sense in recent times. Their use, their pure and simple material being, is precisely that, because I consider (and I’m not the only one) the working method to be more important.

Only the method elevates the primary signifying cognitive data. Everything is revealed in it, and it contains the reception of all the elements chosen and used, whether material or concrete. That’s why I continue to say that one cannot see a work from a distance but must interpret it at close range. My work contains this duality of distance and nearness, so that the focus for viewing the painting is another contamination of the continuous ambiguity.

Everything that I convey in the work is the multiplicity of the objective data. As I said, there are various stages in which these become contradictions: from the design in which a support vitalizes its own parietal or illusionistic dynamic or from the “raining” of color-paint onto the canvas that surrounds them. It seems that a sort of vulgarity and sacredness both intervene and mingle in an interplay whereby their identity ends up vanishing, disappearing into a dull conflict.

Of course, especially in the work I did around, let’s say, 1971, I think we can also talk about a visionary quality, but without, in the final analysis, making it a means for representing a kind of logic of things. I want doors to be open so that I can enter and exit them at my leisure (I don’t know what tomorrow will bring), a changing to and fro where it is impossible to accept boundaries between life and art — even though my (ancient) choice of painting remains linked to my physical limitations and those of my experience.

The comprehensive exhibition “Rodolfo Aricò: Line of Demarcation” is on view at Luxembourg & Dayan, London, from October 5 to December 17, 2106.