“In times of war, bells would be melted down to create cannons,” reads the accompanying text of Samson Young’s project For Whom the Bell Tolls: A Journey Into the Sonic History of Conflict (2015). But what about culture and the reassuring mundanity of life that bells symbolize — do they vanish too? War erases time; or better, it removes the articulation of time from lived experiences. Our survival does not depend on time like it does on food. Yet how does one live without the articulation of time? During wartime, in societies that suppress or lack any response to forms of violence, individuals seek to understand the meanings and mechanisms of conflict as a way to resist falling into oblivion; this is how I would describe the practice of Young (b. 1979, Hong Kong; lives in Hong Kong), an explorer of sound. Taking the intimate actualities of lived conflict as a point of departure, the artist explores broader concerns regarding the sustainability of civilization.

The art experience — and by extension, artists’ working methods in the creation of such experiences — has evolved. To locate a work of art’s resonance, we now look for modes of aesthetic judgment that go beyond the events, characters and images that are presented to us. Instead, the contemporary art experience asks that we look inward, that we reconstruct an image of the self by exploring the hints that artists have left behind. Artists often facilitate such acts of self-exploration by concealing themselves, at times through ambiguous descriptions of artworks or by controlling the circulation of images or biographical information. The work of Tino Sehgal and Theaster Gates comes to mind. These artists work in the field of semantics, in the sense that meanings are orchestrated and performed into being, or are set in motion through a network of objects, their aggregation, and the consequence of their synthesis. This line of research has also led to various experiments in dematerialization, as is the case with Conceptual art. Through the placement of visual and semantic fragments in space, the artist constructs portals through which we approach the “scenes of action.” The exhibition space extends into a psycho-geography of experiences that cannot be touched or seen, but are felt and savored. Young sets himself apart from the above-mentioned conceptual experiments: he projects a more concrete presence, approaching his performance with the diligence and professionalism of an orchestral musician who abides regular rehearsal hours. This finer distinction between “action” and “(musical) performance” is an important clue to understanding Young’s practice.

The coexistence of multiple conflicts is apparent in the way Young draws his references. His interests are diverse: from Frantz Fanon to John Cage, from character studies to historical narratives, from identity politics to the conditions of ordinary citizens. When reality boggles the mind, when we fail to understand the world, two types of reactions are typical: to silently acquiesce, or to constantly question, reflect and readjust. Young instead chooses to take comfort in his artistic labor. From the theater to the gallery, the impulse of a craftsman is key to his practice. In his new work Canon (2016), Young performed with solemnity throughout the opening hours of Art Unlimited at Art Basel, inhabiting a temporal space that belonged to him alone. Elevated in midair above the show floor, his actions were in the present but his mind was elsewhere. His artistic labor allowed him to escape the context of an art fair, where all objects, actions and even lights are but commodities of the market. He channeled them into the calls of mating birds. Here is a heroic image of the lone individual versus the system. I wonder if anyone listened.

The stories of Hong Kong and Vietnam that Young references have not been erased from the current historical record. Indeed, his gesture suggests a yearning to move forward, away from the haunting memories of these events. There is often a level of fluidity and non-specificity in Young’s treatment of certain historic events, and in the opinion toward them that he expresses. This approach allows for a discussion situated in a universal context — an intimate conversation that does not intend to shock or offend. At a second, separate location, on the second floor of the fair hall, Canon took the form of a small, enclosed room. Inside the room were small wall texts, a plastic basin overflowing with water, security fences through which one could look out and booklets scattered on a long bench. These objects seem to exude a sense of audacity, a gesture of encouragement in the face of life’s adversities. Often, the only people we succeed in encouraging are ourselves. In the 1970s, owing to the city’s specific geopolitical situation, Hong Kong was a Vietnamese refugee’s springboard to Europe and America. How did the people of Hong Kong feel then? And how has Hong Kong’s collective psyche shifted since the city’s historic handover in 1997? Questions abound — from Hong Kong’s new role in the context of global geopolitics, to the city’s current developmental predicaments. Young’s Canon invokes Hong Kong’s situation in the 1970s after the Vietnam War, as well as the wider global refugee crisis of today. Young says that over the past several years he has begun to focus on the political issues of individuals by observing their living conditions. I wonder if is this shift of focus is itself a political necessity. Clearly, Young’s work does not fit comfortably into the existing paradigms of political art. It seems to go beyond the interests of art and politics. His concerns are the processes of transition and the hopes of those in desperate conditions.

Does Young see something in himself that parallels the plight of early Chinese emigrants in Vietnam? He explores processes of transition through an investigation of their temporalities, memories and immaterialities. This brings him ever closer to the “scenes of action,” where the lived condition of transition is reenacted, yet the identities of its players are obscured. The various components of Canon and the objects highlighted in the publication that accompanies the work are blended into a pulp, becoming all but mere residues of memory. While Young donned a period police uniform from the 1970s, the picture nonetheless prompts associations with the more recent Umbrella Movement, which is an image of the Hong Kong police we are more familiar with. The policeman Young role-played stood high above the crowds, his trembling lips suggestive of speeches and lectures, but also of intimate talks with ordinary citizens. Here is an observer who is implicated in the event, simultaneously an anonymous Hong Kong policeman of the 1970s and the police force of today. This is what Young emphasizes: an activation of the historical and the contemporary vis-à-vis ordinary objects, characters and the daily routines they perform. Up high and down below, decades are traversed in an upward glance.

Young’s practice is informed by rigorous research, and it manifests in diverse forms, including composition, theater, live performance and field recording. Some of his preoccupations include questions concerning the role of the body, identity and media in contemporary contexts. In the project For Whom the Bell Tolls, Young traveled around the world to record the sounds of bells. A poetic nod to Hemingway, he approaches the topic with the lightness of a wandering bard who is indifferent to worldly concerns. Within the bell resides a dense network of meaning: historically, the sound of the bell summoned villagers to worship, marked civic and religious times, and called citizens to arms. But a bell is also a symbol for the more peaceful spirits of Zen and of nature. With few exceptions, the authoritarian regimes that these bells once symbolized have been transformed, rendering the musical instrument and its resonance a relic of bygone eras, detached from reality. This paradox is perhaps the reason why there is a level of mystery in Young’s work. His field recordings are seemingly improvisational, yet his actions are anchored in time and place. What is heard in the blink of an eye?

Sometimes artists are guardians of the system. While they ostensibly aim to challenge it, their works are ultimately absorbed into and institutionalized by the system, thus legitimizing its logic. Others support their creations with references, cramming their works with superfluous intellectual content from historical or contemporary sources. Young takes a different approach. Because music connects us through its universal accessibility, his artistic labor summons into being the ghostly, indistinct faces of political conflicts. Young could well have taken the convenient path of highlighting his identity and political context for the benefit of his artistic career, but he chooses instead to act and to listen. Disruption for disruption’s sake is not his intention, nor does he have any specific destination in mind for his journey. While performing Canon, whenever his body reached its physical limits, Young would sit and rest. At the close of the workday he hung out with friends, like a craftsman who is well versed in the balance between work and leisure. In times such as this, Young finds assurance in humble bodily experiences.

“John Cage once said of his drawings: they had to be like music,” wrote Young in his text “On Drawing Sound.” [thismusicisfalse.com/_ON-DRAWING-SOUND_] “He promised Schoenberg that he would be faithful to music, even in his drawings. What does it mean to be faithful to music? For Cage, I think this meant that whatever he did in the visual realm, he operated in compositional terms, as opposed to musical terms.”

Young’s work does not offer an urban experience, nor does it boast anything akin to the trendy post-Internet aesthetic prevalent in contemporary art today. His works are grounded in bodily experiences. He walks, sings and performs on musical instruments. He scribbles over musical scores and historic images, and reduces them to simpler forms and narratives. In response to Cage’s thoughts on the relationship between art and music, Young’s laborious practice is an investigation of the ways in which the body’s daily routines operate in “musical” or “compositional” terms.

Here, the sounds that Young expresses and the global violence that concerns him take on an otherworldly quality — like an ambiguous birdsong, its singer is invisible and anonymous. With this elegant mating call, Young demonstrates the full power of what he calls the “pre-linguistic communicative act.

(Translated from Chinese by Enoch Cheng)

Li Zhenhua is a writer and curator based in Zurich, Berlin and Beijing. 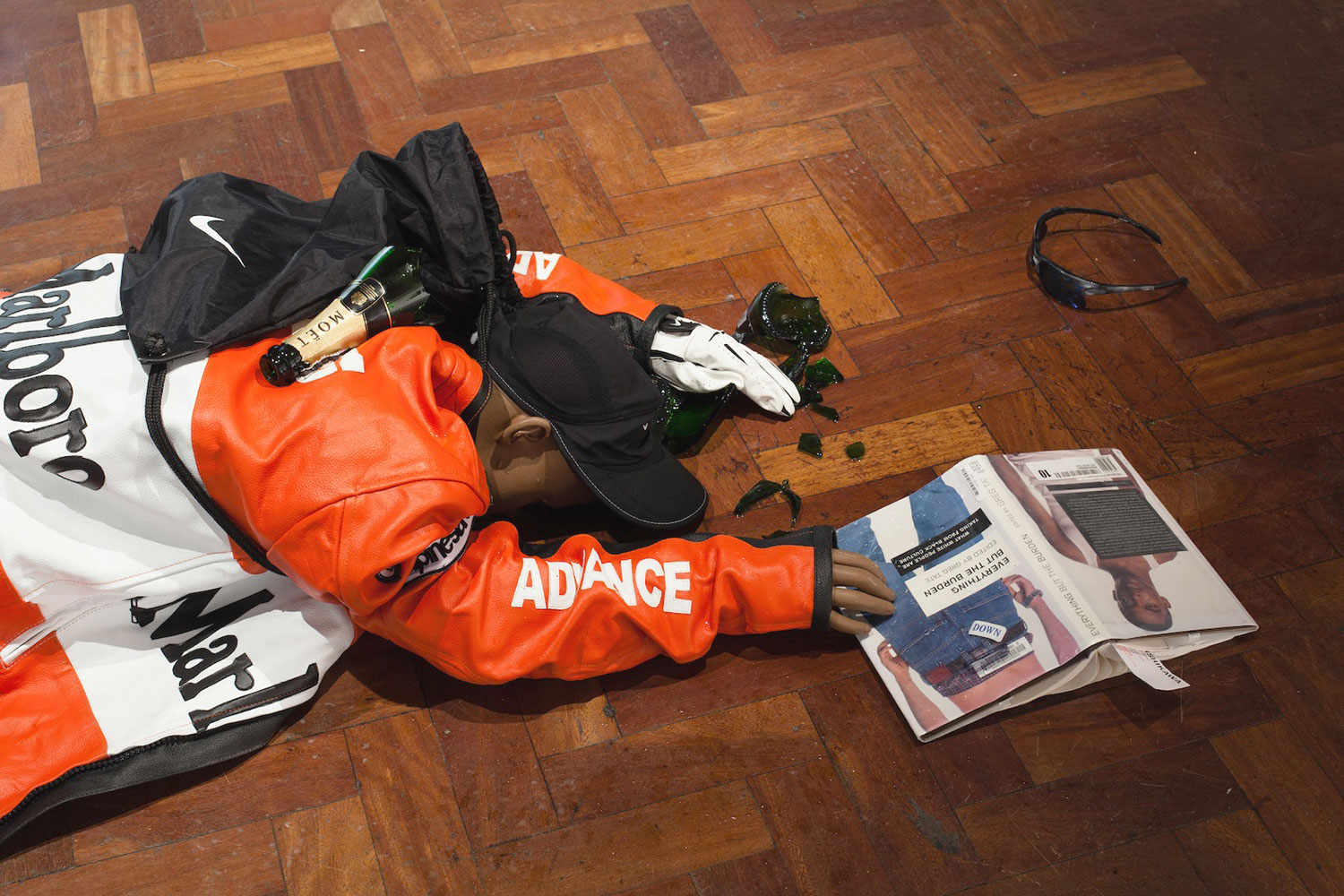 Opinions are like assholes. Or so it goes. London-based artist Dean Blunt gets this. His provocative exhibitions are designed to…