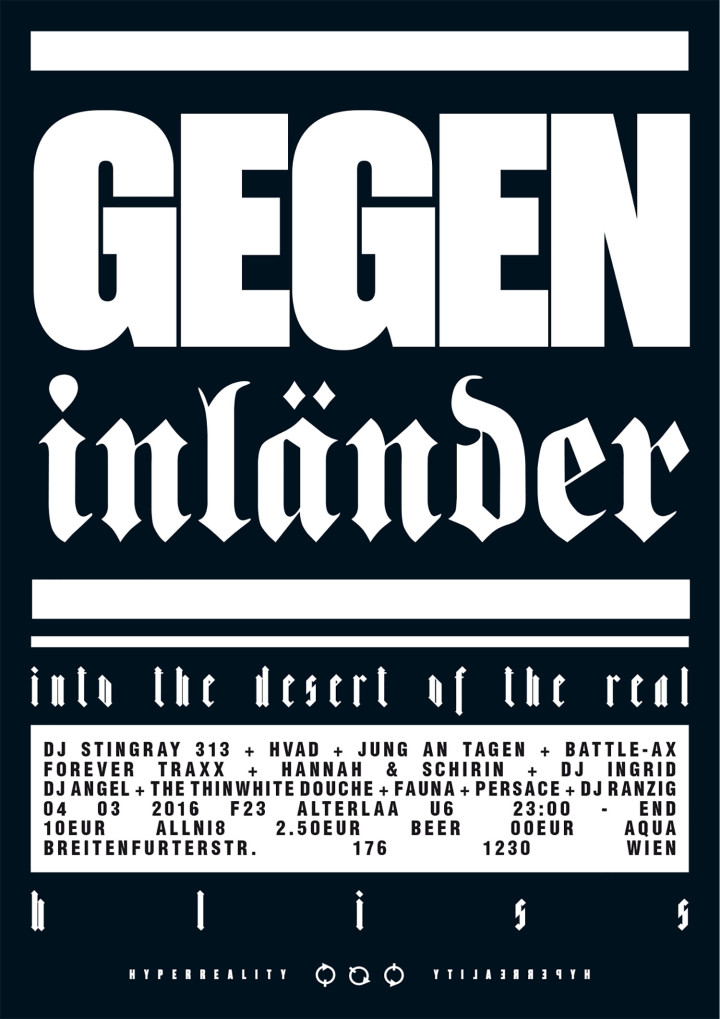 Ever since my first night out I have felt butterflies in my stomach when approaching club doors. For me they were gates to another world, passages to a social utopia, instilling in me anxiety mixed with excitement at what I would find and whether I was ready for what lay in store.

Those butterflies, which most people feel, became suffocating over the years. I gradually realized that it was not excitement about new forms of togetherness that I might experience, but discomfort and fear of the social taxation that awaited me behind those club doors. Don’t we all know the drill? Louis Vuitton bags in place, tits out, smiling at the bouncers, looking rich, healthy, sober, heterosexual and white. “Fuck that!” I decided, before I eventually found, in 2013, a yellow-brick road that invariably winds its way, through the gray, rich and fearful city of Vienna, to Bliss.

Bliss is not a club. It is a migratory, socio-artistic institution. Today, club culture is not code for “social utopia.” It’s a term people use to add cultural gloss to pseudo-elitist late-night activities. We know the latest hype, we wear the freshest gear, we snort the purest stuff…

Club culture is in constant danger of being colonized by capitalist structures. The term has been overused, stripped of meaning and appropriated to exaggerate sexist rules that structure our realities (think of VIPs, bouncer door policies, groupies, etc.). Venues that affirm such structures contribute to weakening a dance floor’s potential as an autonomous space, simultaneously undermining the political power of music. Bliss is a strategy to counter ostracizing social structures in all respects: bookings, access, venues, promotions, online communications, crowds. Form and content are always in sync.

Recently, journalist Hannah Christ conducted and publicized an eye-opening study on Vienna’s club scene and the gender politics of its DJ and live-act bookings [“Diversity Matters: A Discourse Towards Emancipated Club Culture,” pw-magazine.com, 2016]. The result was depressing: on average, fewer than ten percent of the performers at regularly held club nights are women. Bliss stands out with an average of fifty-one percent of performers identified as non-male. In response to this data, the Femdex initiative was initiated as a platform and index to support self-identified female DJs and musicians.

Bliss is not only a current window onto a diverse musical and cultural hyperreality; it also functions, for those who grew up in the bunkers and warehouses of rave culture, as a reminder that the utopic spark ignited by electronic music has not perished. It also reminds us that a community is more than an online group or consumer demographic, and that the most crucial innovations were created out of resistance to capitalism’s homogenization of culture. With club music’s countercultural history in mind, Bliss is devoted to creating new stages for contemporary developments of this kind.

Gender analysis is a useful tool for recognizing the sociopolitical reality we live in — a reality in which society still sees binary categories instead of a spectrum of gender, race and sexuality. Bliss sees club culture as a multilayered approach that seeks to cultivate a hierarchy-free togetherness on dance floors and beyond. It ventures to promote a nonbinary understanding of self-chosen identities. One of the first slogans Bliss came up with was: “No Gender No Cry.” It was used in a design by Esther Straganz, which included the Bliss logo: a circular, liquid mash up of existing gender symbols standing for a spectrum of gender.

An integral part of Bliss is fostering a community to back and carrying out political interventions. Initiated by Marlene Engel, Bliss is now hosted by a variety of people with a background in applied arts, performance and music. For example, one of the most exciting Vienna-based artists, a Bliss resident since its beginning, is Forever Traxx, who is certainly one of the most underappreciated producers around. His unique persona, largely binary free, takes the form of a mysterious and diverse online identity. Just as Forever Traxx has many manifestations, Bliss is not a fixed entity but a nomadic event — every night is unique. Slogans, public relations and venue are just as important as the music played. Multi-talented artists Lilly Pfalzer and Jessyca R. Hauser organize a performative contribution to each party — another embodiment of nonbinary constructs — under the name of BLISSSQUAD. Their appearances and interventions range from dance to covering up gender-specific bathroom signage to creating fictitious warnings such as “Feelings forbidden.”

Recently, Lilly Pfalzer made up a performance piece based on a sign Engel created for the door at a Bliss night: “Heteros Welcome.” This slogan is inspired by the logo of the Refugees Welcome movement, which is based on a traffic sign showing a family running, typically found on the border between Mexico and the USA. The normative heterosexual binary implications of this familial imagery is disturbing, even though its use in the context of the refugee movement can seen as a best-case reversal. Further, adopting animal-crossing signage in this way is emblematic of the kind of degrading metaphors used by right-wing extremists. The “Heteros Welcome” sign hung on the door during a collaborative night between Bliss and the Berlin-based event Janus.

The performance by Lilly Pfalzer, developed with Engel and Sergio Valenzuela in reaction to this Bliss night, was based on the sign and best described as being in a talk-show format. As an intro, Lilly read a news anchor’s report from Austrian television about the refugee “crisis.” Here she replaced the word refugee with heterosexual: “More than three thousand heterosexuals arrived at the Austrian/Hungarian border. Can we really integrate these people into our society?” The performance, just like the sign, was designed to reveal the absurdity and implied privilege of being able to decide someone else’s future.

Clubs in general can function as a venue for a variety of art forms. Today, many museums invoke music’s universal appeal to increase their yearly visitor numbers. However, a music recital in a museum is hardly a platform for new developments in artistic disciplines. Artist and musician Beatrix Curran, aka Battle-ax, has been contextualized in many different ways, but it wasn’t until her viola performance was set in a club venue at a Bliss night, alongside such acts as Hieroglyphic Being or DJ Stingray, that it could unfold its genre- and format-crushing potential.

Rana Farahani, aka FAUNA, has also been a resident of Bliss since its start. She is probably one of the most overlooked live and DJ acts around. Her way of introducing political content into her songs has influenced Bliss’s polarizing style of communication, and vice versa. Her most recent performance at a Bliss event was promoted with the slogan “Gegen Inländer.” Literally translated, Inländer is used to describe all the individuals within a state’s borders, with no reference to their legal status or ethnicity. It is opposed to Ausländer, meaning everyone outside. Inländer cuts to the core of the right wing’s construction of an “authentic” inhabitant and rightful occupier of a territory, and is ethnically specific. Promoting the slogan Gegen Inländer and putting it on posters in public space is not only a reversal of the oft-heard Gegen Ausländer, but also a sly comment on the contrived nature of such categories.

Experimental and avant-garde music raises questions about the cultures operating within the capitalist system while critiquing the system itself. It is the task of Bliss and the new festival HYPERREALITY, which is also curated by Engel and is scheduled for May 2017, to confront the audience with a number of realities at the fringes of economic crises and socioeconomic inequalities.

Natalie Brunner is a writer based in Vienna.