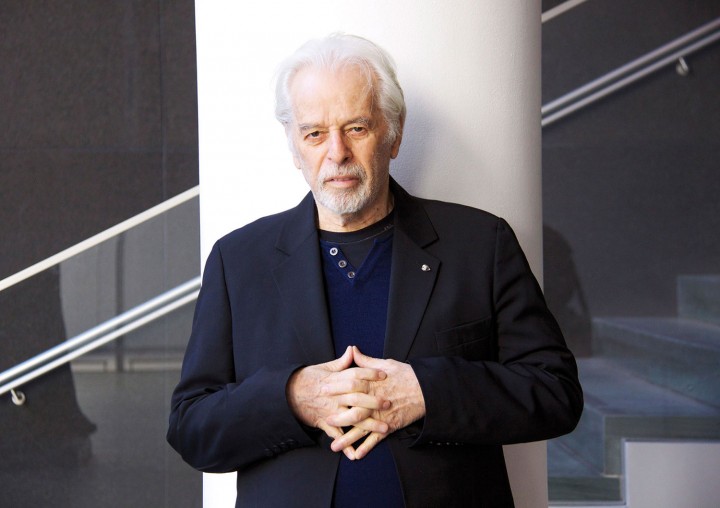 Alejandro Jodorowsky: I would like to start this alphabet with the letter B as the prologue. Bonsai. Why? Because you are in front of this big tree that was once a Bonsai but was given the freedom to grow. It’s like humans. We are bonsais. With the economic system, our moral tradition, we are prisoners, but when you take away the limits of the mind and the soul, you are able to grow spiritually.

Klaus Biesenbach: I had originally written the letter A for anarchy. What does anarchy mean to you?

AJ: Anarchy means freedom. But it’s not the God or the master. It’s against the power. Anarchy is about destroying the power, and that’s not good for me. I want to grow. I don’t need to criticize; I am against the art now that profits from the bad situation to make critical art like a revolution.

KB: Originally, I had the word blood for the letter B.

AJ: Blood is like oil or petroleum. The blood inside the body is beautiful because every single person on the planet is red inside. Blood outside the body is terrible. The same with oil, when inside the earth it’s fantastic but when you take it outside, it’s poison.

KB: For the letter C, I thought about colors.

AJ: The person who really, really feels colors is a blind person, because only by experiencing black you realize what color is. You arrive at poetry when you arrive at silence. When you are in despair, you realize the beauty of the language. It’s about the act of missing. The Jewish people have a theory about this in the Kabbalah. God creates the world, but he creates fear where he is not.

KB: For the letter D I thought about dreaming. Is dreaming important?

AJ: Dreams are becoming reality, and reality is becoming a dream.

KB: In relation to your upcoming film, when you refer to the Dance of Reality, do you mean dreaming or are you talking about vision?

AJ: People think reality is fixed. But it is changing completely. It’s a dance of reality. Nothing is disorder.

KB: One fascination you have is for felines.

AJ: I’m interested in all the magic from Egypt, from the past. Magicians and witches always have a cat. Why a cat? Because he can see obscurity. The self must see the obscurity of the unconscious. I cannot live without a cat; they open our logical mind to intuition.

KB: Gratitude, what does that mean to you?

AJ: One is very happy, and the other is bad. I think, “Why am I in a bad mood? I pray all the time, like you.” They say, “Because you pray only for your sins. And I pray only to give thanks.” For me, one of the biggest values of the spiritual life is to say thank you for living.

KB: I had two words for I… What about images?

KB: When I think about your movies, I think of joy.

AJ: When I went to see my Zen master Ejo Takata in Mexico, I saw a person who is without age and without nationality. His world is one of pure happiness. All the teaching of Zen is to be happy. To be enlightened is pure joy.

KB: K. King. Is the king an important word for you when thinking of your compositions?

AJ: Yes. King is an important word to confront our multitude of egos. We are not really ourselves, until one part of us — which is the essential being — becomes king and makes an order to all the egos. From there, every person is himself. He is a king of himself.

AJ: The only literature that is important to me is poetry. It is about the maximum expression of a concept in the minimum amount of words. Now it’s Twitter. This is literature for me…

AJ: Yes, to put an enormous quantity of thoughts into 140 characters. It’s about compression. In the 21st century, Twitter is the haiku of the Middle Ages.

KB: What about mythology?

KB: The other word for M would have been movies.

AJ: Movies are the same — the movies gave us an idea of heroes. Now we have nothing. We only have disgusting stars in the movies.

KB: [laughs] Thank you, that’s what I wanted to hear!

AJ: We have dirty chickens with peacock feathers.

KB: Is nature also mountains? Is The Holy Mountain (1973) about holy nature?

AJ: Yes. Mountains are essential. Metaphorically, to climb is to go to the deepest point of yourself. To climb a mountain is to find your interiority.

AJ: O is a circle. It is perfection. There is nothing to add, nothing to take away. That is the O.

KB: So we don’t have a word for O? It’s just a beautiful letter?

KB: I have two words for the letter P. One is politics and one is poetry. Which do you like better?

AJ: Politics is perished now. Politics was the love of the city, but now cities have become the cancer of the planets. Politicians have no power, as they don’t really exist; they are puppets of the economic system. Panic is good. When we do something we never do, we let ourselves be what we think we are not. When there’s panic, you let out your true nature. And what is that? It is the enormous and incredible desire to live. It is a very illuminating moment.

AJ: It is an O with a nail through it. It is perfection that has an imperfection.

KB: My Q word was question…

KB: For the letter R I had the word ritual.

AJ: It’s about repetition, to repeat a beautiful intention. To repeat something sacred you must understand absolute respect. If you don’t respect a painting or a flower, you cannot understand its beauty. I remember a prisoner for life screamed with fear when he found a mouse in his cell. The mouse could come and go as he pleased, so he learned to respect the mouse and his freedom.

KB: But how is ritual connected to respect?

AJ: We don’t know what respect is so we must learn it.

KB: So the ritual is the repetition of respect?

AJ: Yes, yes. If you respect and repeat it, maybe you won’t lose it.

KB: For the letter S, seduction.

AJ: I have a serpent. From the beginning of mythology, S is the serpent. The temptation of the serpent telling you to go and eat the fruit of the consciousness.

KB: Is art the fruit of consciousness? What is seduction? Is it art?

AJ: Man cannot go into the truth because we don’t have the brain for it. But the light of truth is beautiful, and that is art. Life is an illusion, and art allows us to live in the most beautiful illusion. It’s not a reality, but it is the product of truth.

KB: The letter T is…

AJ: It’s protection. You have a vertical and a horizontal. In the shadow of the tree you can live without eating the fruits.

KB: The letter T for me was tarot.

AJ: That’s also about teaching, and protecting. When you are teaching something you are protecting. When you teach yourself something you are protecting yourself from the artificial ego. It is a mirror of reality. A mirror of yourself. When I first started working with tarot I hated it because I didn’t understand. But then I realized it was what I didn’t understand about myself. And what I hated was actually what I hated about myself. What I felt was ugly was my own ugliness.

KB: The letter U…

KB: I had a very different word. Underground…

AJ: It is going outside of your limits. It’s not about being under the earth, but about under the logistics of society. Under the society is where you find complete freedom.

KB: V. I had the word violence. What does violence mean?

AJ: Real violence is opening the limit of the mind, the emotional and sexual limits that bring you to generosity. Generosity is violence.

AJ: Society is founded in egoism and competition, so when you have the generosity to give without taking anything in return, it is violent. For example, my next exhibition will be free. I won’t earn anything. In a world where everything must be paid for like prostitution, it’s an act of violence. The angels who brought the truth were an act of violence. The big bang: I cannot imagine anything more violent than the big bang!

KB: What about W? Women.

AJ: That’s two Vs. It’s speaking to symmetry, the existence of the other. We are not alone. The W is the reception of the other who is the reality of the universe. We are not the center of the world. It is the mirror, the other, the reflection.

KB: I could not find a word for the letter X…

AJ: X is a mystery. It’s an interesting letter because it is two crosses. A mystery that you cannot go inside.

KB: How important is being young?

AJ: On the inside, I have not aged. To be young is a continual gestation. The fountain of youth, eternal youth, is inside you. In the middle of your unconscious, the mind is really young.

KB: And what about therapy? We didn’t talk about that for the letter T.

AJ: Therapy is about learning to see and listen to others. The biggest part of illness is because of people not being loved or listened to. Every illness is just a theatrical play for attention, the need to be heard.

KB: So what about confessing at church?

AJ: Confession in front of someone who knows nothing about life is not good. A real confession is to stand in the middle of your family and say you are homosexual, not telling a pedophile in the church. The Catholic religion is an illness.

KB: I think one word that is missing is spirituality. Many people don’t believe in religion anymore…

AJ: I use religion as an example. I don’t need to believe necessarily in the sacred teachings, but I use them as symbols.

KB: But is religion spirituality?

AJ: The universe is created by energy. Everything is spirituality because we agree that the mind, heart and body are all connected.

KB: Are there higher powers?

KB: What about the letter G — guru? Are you a guru?

AJ: No, no, no. A guru is a job for a lazy person who does nothing and is paid to sell emptiness.

B: Our last word is Zen.

AJ: Zen has no end and no beginning. Man in the present has no beginning or end. A feeling of existence without being tied to anything.

KB: What about love?

AJ: Love is when you find the other who for you is the middle of the whole universe. That is love.

KB: You said before that a priest is someone who knows nothing about life, and a guru sells nothingness. What is an artist for you?

AJ: An artist is an open door where the wind is able to blow through.

Alejandro Jodorowsky was born in Iquique, Chile, in 1929. He lives and works in Paris.