Barnaby Furnas often credits Kara Walker’s vision of the bad old South as a catalyst for his own Civil War paintings, and it’s easy to think of the two artists’ debuts as pictorial call and response: Of course,Furnas answers Walker, of course Americans are still stuck in the 19th century. Of course history painting can still matter when it is sufficiently reckless. Like Walker, Furnas adapted a genteel technique to un-genteel purposes, using watercolor to paint blue skies crisscrossed by bullet trails, disintegrating limbs and poppy fields of exit wounds. His early battle scenes, executed with all the lethal absorption of a seven year old, were quickly recognized as something rare: a seamless fusion of technique, subject and temperament. Plucked almost straight out of graduate school for his first show with Marianne Boesky in 2002, Furnas was already an utterly distinctive artist, marked by a growing obsession with one signature color: the red of urgency, of blood, of his last name, of his own red hair.

Furnas’s momentum was more than just a matter of pictorial drama. In post-9/11 New York, his images of unfettered violence offered a rearview mirror to the awakened paranoia of the Bush era. Exhilaratingly grim in a time when dark truths seemed inescapable, and yet as adamantly childlike as a scribbled page, Furnas’s paintings seized the attention of an art world hungry for big, unbridled ambition. And Furnas’s ambition was, without question, unbridled. While his name soon became synonymous with escalating auction prices, Furnas ramped up the scale and intensity of his work, producing ever more feverish, hallucinatory images of suicides, deserters and exploding lovers; of John Brown, Jesus Christ and the Apocalypse; and most spectacularly, of giant hemoclysms of red paint. As much as thirty feet across, these scarlet tsunamis seemed to literalize the “blood-dimmed tide” of William Butler Yeats’s The Second Coming(1919), while at the same time revisiting the gesturalism of Franz Kline and Morris Louis. The blood floods were in turn followed by black flood paintings, narrative Rothkos or Reinhardts with holes cut out where the sun had been painted — “post-blood, lights out,” as Furnas succinctly described them. The world was over, and Furnas had recapitulated much of American Modernism in his own dire terms. Whether dazzled or doubting, audiences had to wonder, where does he go from here? The title of his 2008 exhibition at Boesky, “Closed Loop,” hinted that Furnas wasn’t sure himself.

We had to wait four years for an answer. In the interval, Furnas mounted shows of small works — one of lovers penetrated by linear rainbows in New York; another of satirical portraits in London; and a third of rock musicians in San Francisco. Uncharacteristically calm and modest, all three shows were reminders of Furnas’s technical inventiveness and charm, especially when working at a smaller scale. All were set in the present. When it opened last November, however, Furnas’s latest New York exhibition made clear that he had not left the 19th century behind. On the contrary, most of the new paintings featured 1850s-style whaling crews — the energy industry of the pre-petroleum era. Smaller canvases and graphite drawings portrayed individual flensers, gutters and portioners in bloody motion, butchering carcasses. A stiff rectilinear portrait of Ahab tipped its stovepipe hat to two tacit sources: Herman Melville and Carroll Dunham, for whom Furnas once worked as a studio assistant. In the back room hung the show’s centerpiece, four joined canvases depicting whaleboats, gulls, sharks and, beyond them, a massive wounded sperm whale covered by a fatal forest of harpoons. From the creature’s blowhole spouts a gusher of blood, the signal of the crew’s triumph, and of the whale’s imminent death.

In its choice of canonical subject, grand scale and tragic euphoria, The Whalers was classic Furnas, designed to deliver an unapologetic feast of feeling. It was easy to surrender to its manic solemnity — and to enjoy its wayward art-historical pedigree, equal parts Fernand Léger, Rockwell Kent, and Hermann Nitsch. At the same time, one couldn’t help recognizing the blood gusher as a kind of tamed, miniature echo of the earlier Furnas floods. The connection left a little trace of anticlimax in the air. Was this unfair? Did the whaling pictures as a whole seem too neat an opportunity for Furnas’s arsenal of blood-and-blue-sky pyrotechnics? Or had Furnas simply ratcheted up our expectations to a point where nothing but anticlimax was available? Busily carving a giant creature into smaller, more manageable forms, the whale butchers seemed, at least in the small pictures, artisans bent on a gory job, their businesslike demeanor not quite in sync with Furnas’s thirst for extreme emotion.

A second group of images depicted a different kind of whale experience: that of the Biblical Jonah. In several of these, Jonah emerges from the open mouth of the whale and faces us, standing calmly on its huge lower jaw, like an actor on the “lip” of a stage. Around him issues some sort of viscous purplish ectoplasm, presumably the whale’s saliva, spewing him out towards dry land. In the darkest of these images, Jonah and the Whale #1(2012), a translucent skull floats in the black air above Jonah’s head, its lower jaw oddly tucked into his eye. Here, if Furnas’s precise aims seem less intelligible, the picture’s supernatural effect remains entirely compelling, as eerie and memorable as a de Chirico piazza.

More powerful still was a single modest-sized canvas depicting a subject beloved by generations of schoolchildren and folk artists alike: Jonah In the Belly of the Whale. In Furnas’s hands, this arguably trite motif felt almost unrecognizable. Jonah appeared sideways, naked, painted with a Shroud-of-Turin-like sponginess, as if his image was an aqueous imprint. Squeezed between red mattress-like walls, hands pressed together in prayer and eyes open in the darkness, he seemed an emblem of the fiercest possible concentration, an adult fetus desperate for rebirth.

In the end, the two sets of pictures felt shrewdly complementary: one secular and social, the other religious and solitary; one death-centered, the other a vision of new life. Both were allegories of transition, but rather than sketch alternative courses for Furnas’s future, they seemed to highlight aspects of his temperament. The Ahab side reminded us that Furnas is an artist of singular will, hungry to take on outsize challenges and deliver spectacular effects. The Jonah pictures showed us a different Furnas, not necessarily more modest, but more deeply immersed in the cocoon of his own imagination. As Ahab, Furnas could continue to revel in his 10th-century tropes forever — and speaking as an admirer, that would be fine with me. As Jonah though, Furnas seemed likely to take us somewhere entirely new.

“The First and Last Day,” Barnaby Furnas’s recent exhibition at Victoria Miro in London, included two bodies of work on two floors, creating a sort of parallel cycle. The downstairs space featured a group of very large figurative works based on the book of Genesis and the exploits of Adam and Eve in the Garden of Eden — called the “First Day” paintings — while the upstairs space was filled with a 15-panel work titled The Last Day(2013), which sequentially depicts the end of the day/world: “After all, every sunset is a sort of apocalypse,” claims the artist. Although the two groupings of work are different, they are also united by longtime concerns of the artist such as an obsession with capturing spectacle, overwhelming moments, beginnings and endings. Both groups of paintings are made by pouring paint on an inclined canvas, highlighting the essential role of time: The “First Day” paintings — with subject matter reminiscent of Masaccio’s famous fresco — are all made on special canvasses with a thick coat of gesso combed vertically to create ridges on the surface of the linen. These ridges give the diffuse figures in the paintings a blurry resolution; they appear to be falling, as if you could see their molecules being pulled downward. The Last Day is also made by marshaling gravity: each of the fifteen panels is divided in half and masked out with tape, whereupon the top (sky) and bottoms (sea) are poured, creating a situation in which fluid movement — the paint in relationship to gravity — plays a leading role.

With these works Furnas goes beyond a so-called painterly touch, beyond gesture. In these new paintings, historical motifs become a means to premiering new experiments — new formulas terrible and beautiful in their precision.

Alexi Worth is an artist based in New York.

Barnaby Furnas was born in 1973 in Philadelphia. He lives and works in New York.

I hadn’t been back to China since 2005. An eternity considering the country’s rapid transformation, its urbanization and economic development,… 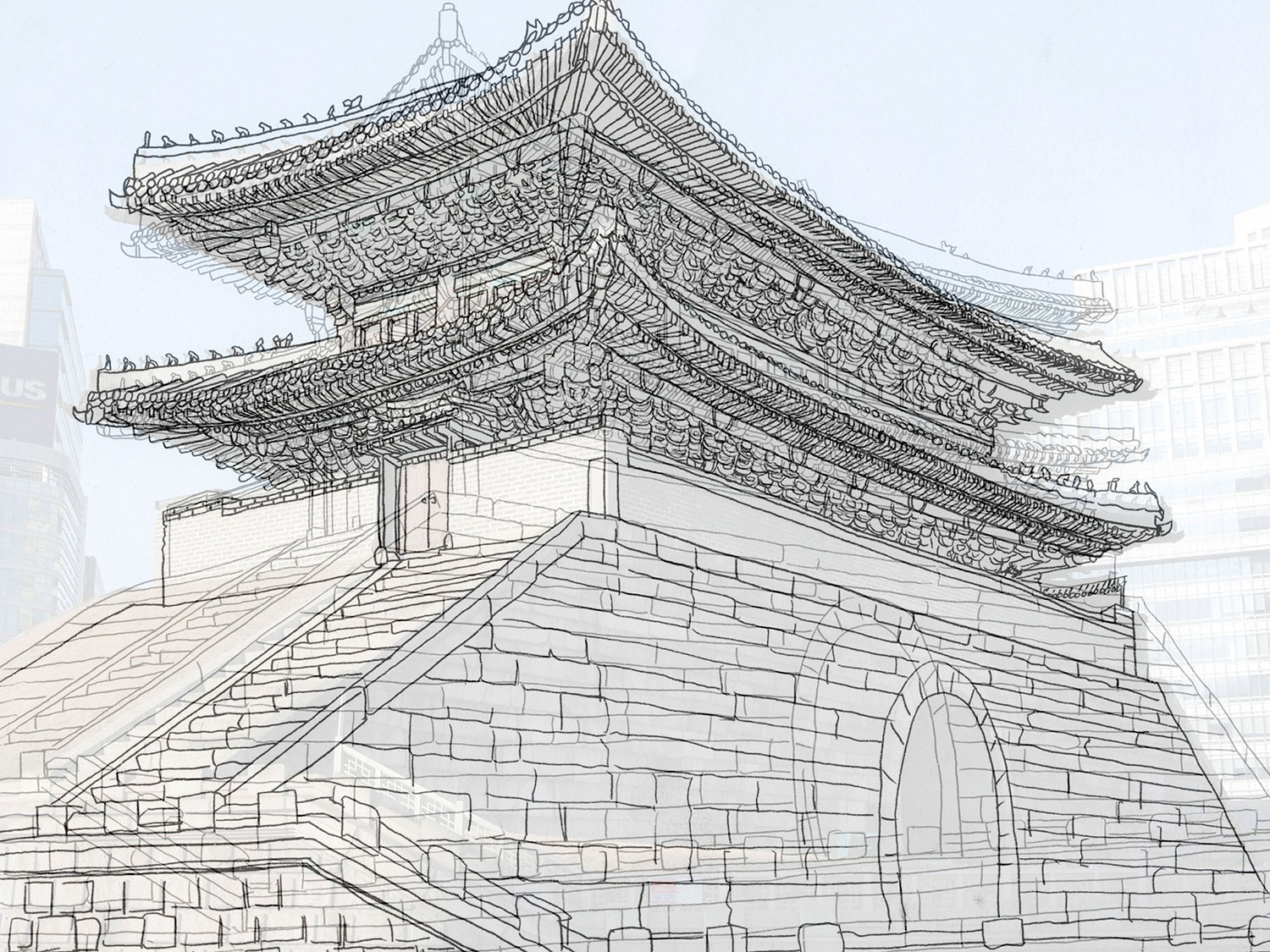 Yilmaz Dziewior: Before working together as a duo, each of you had a career as a solo artist. What were…