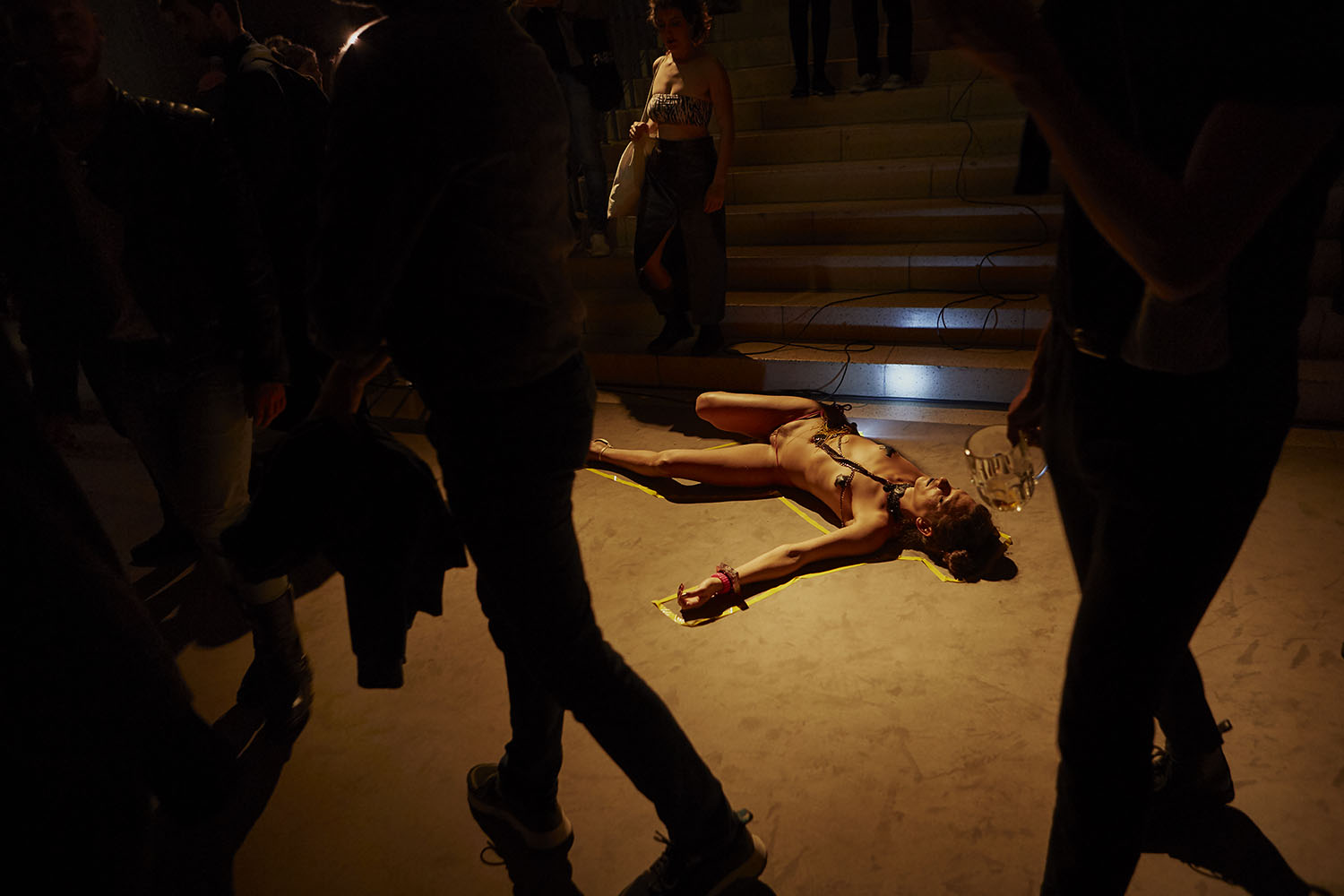 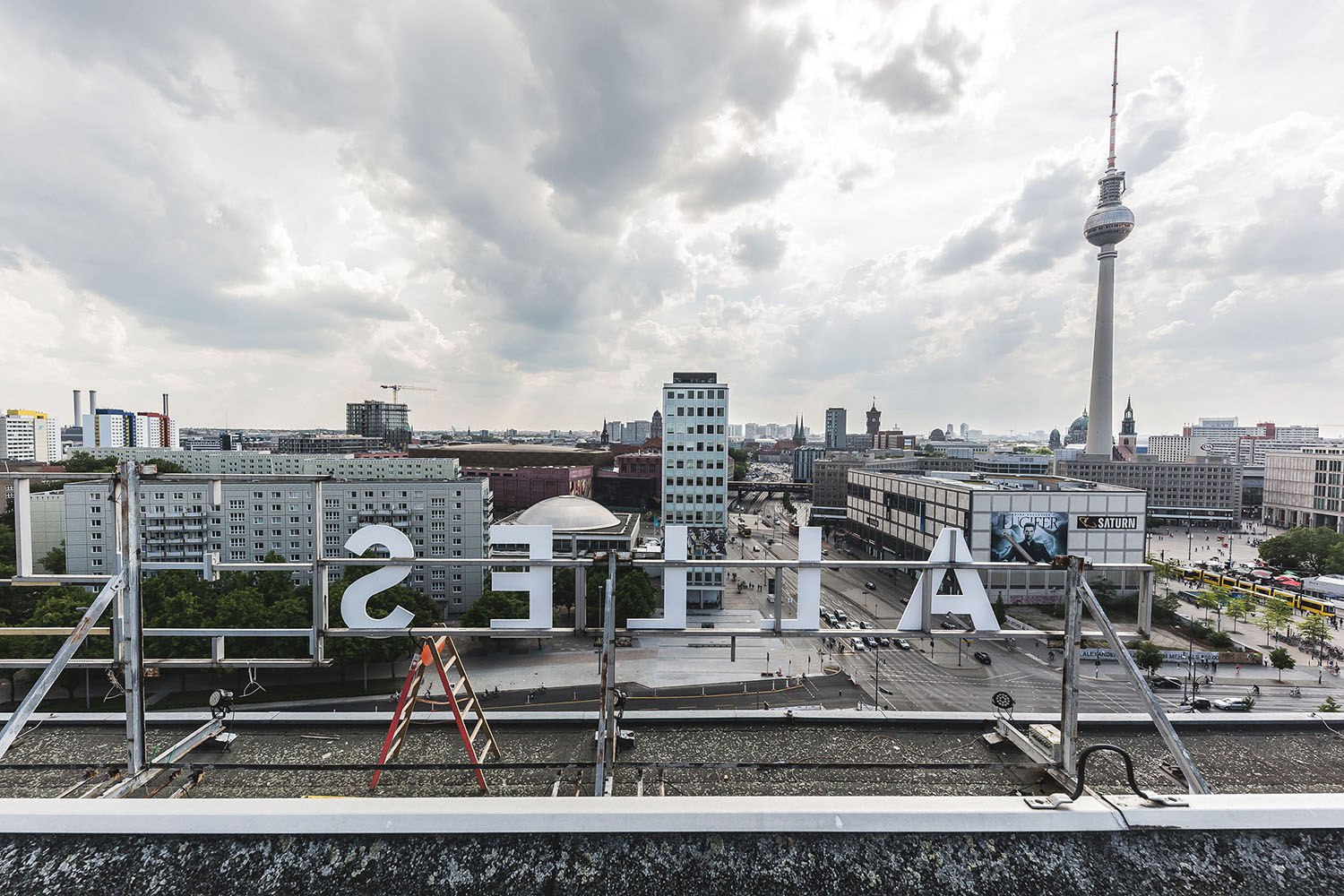 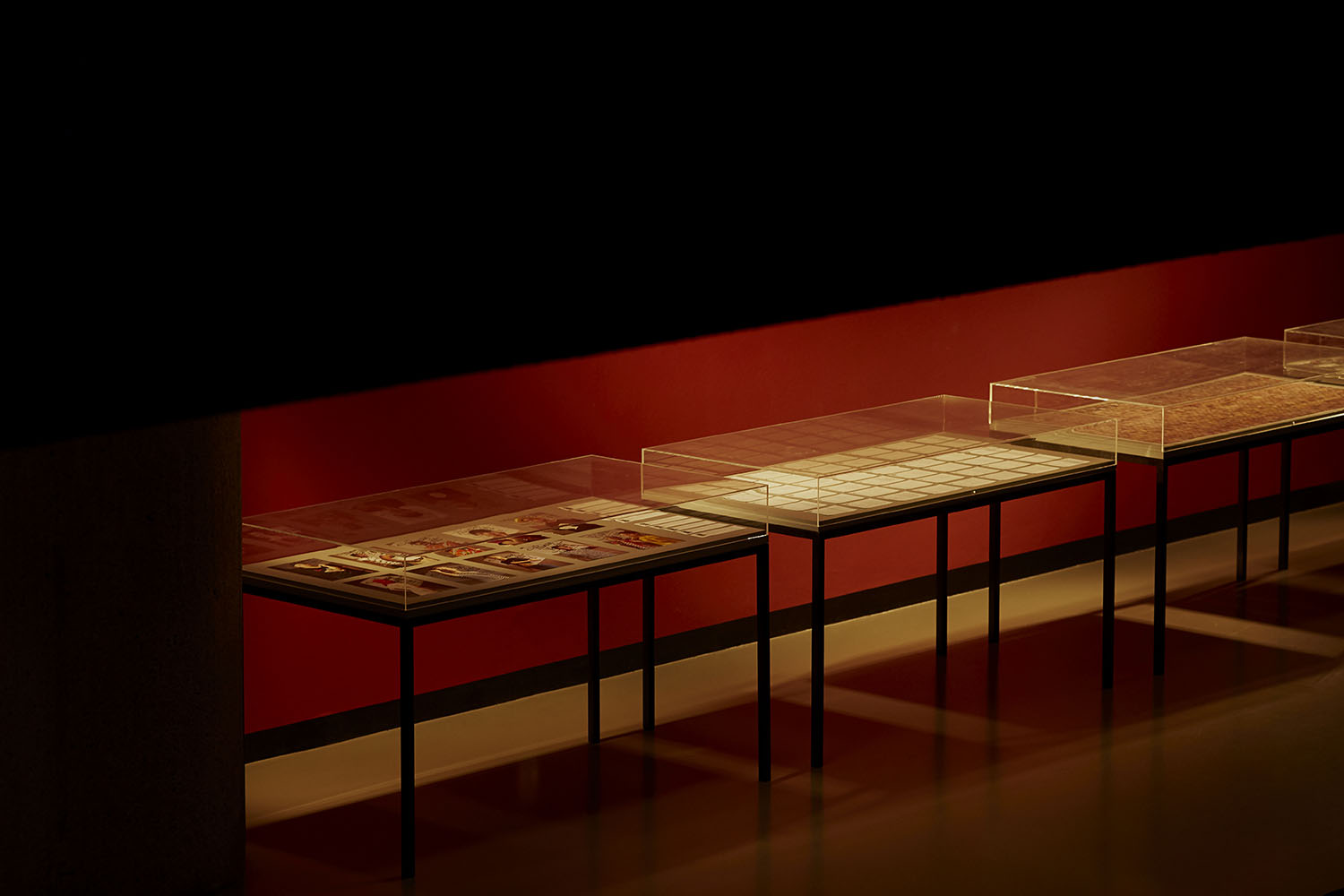 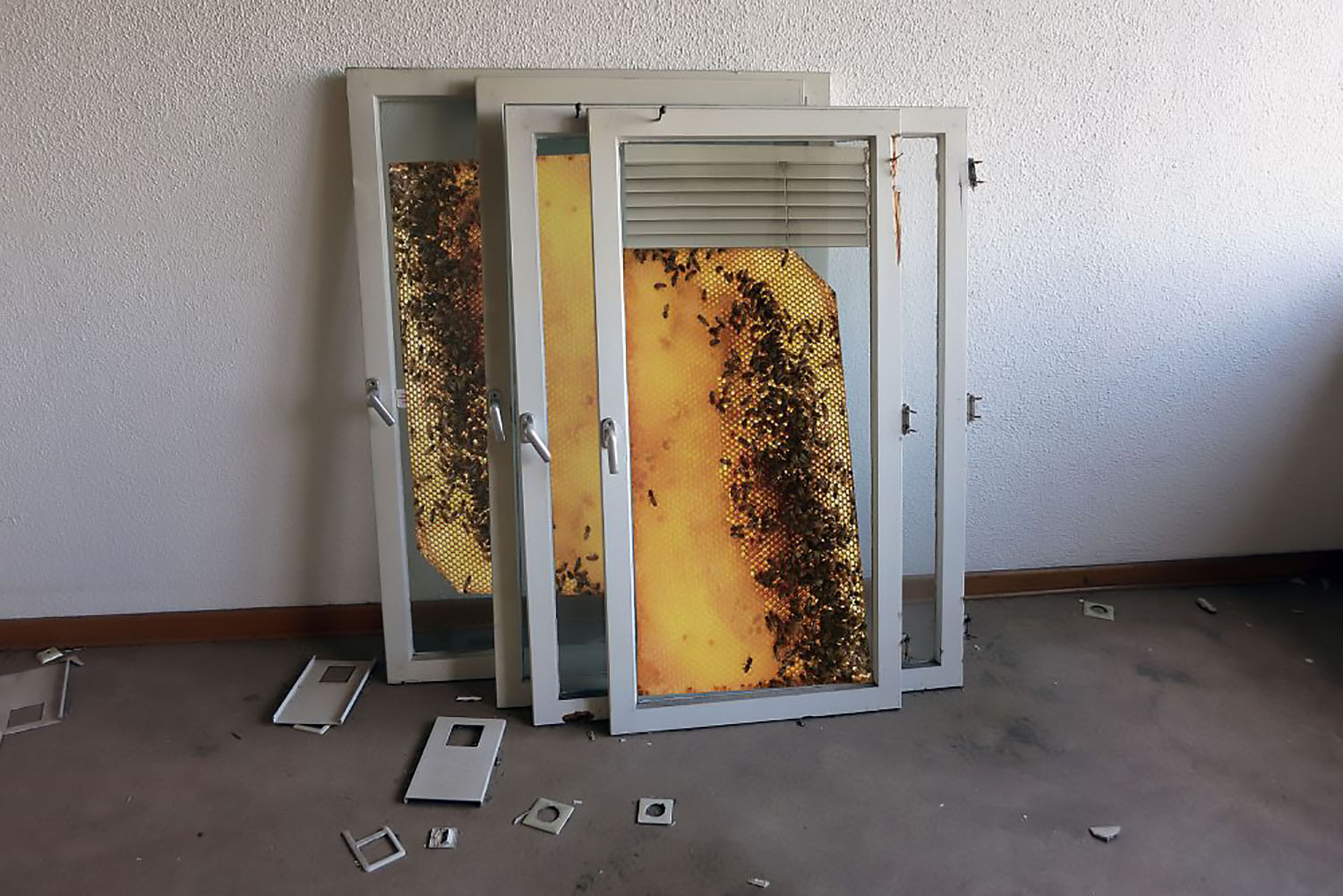 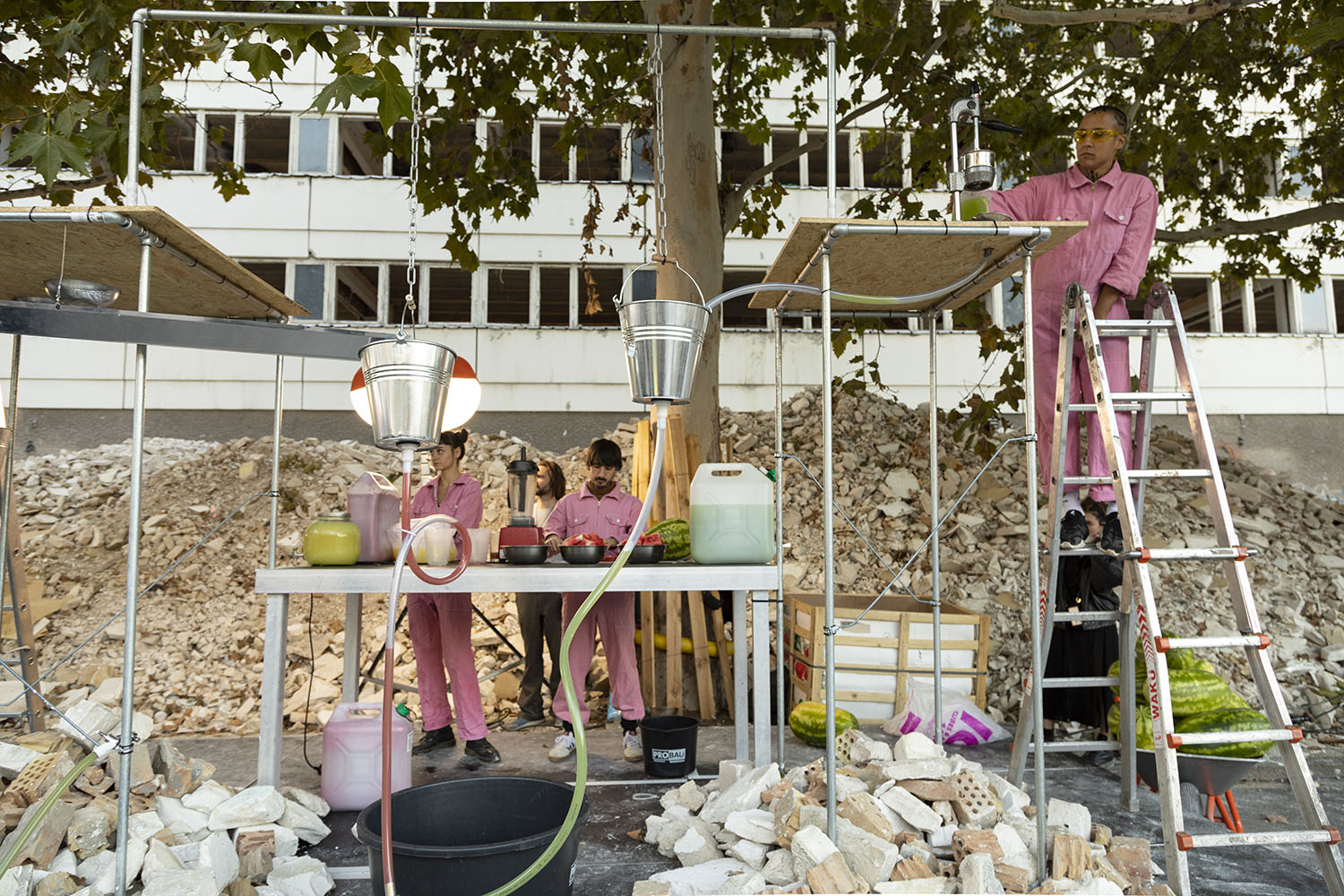 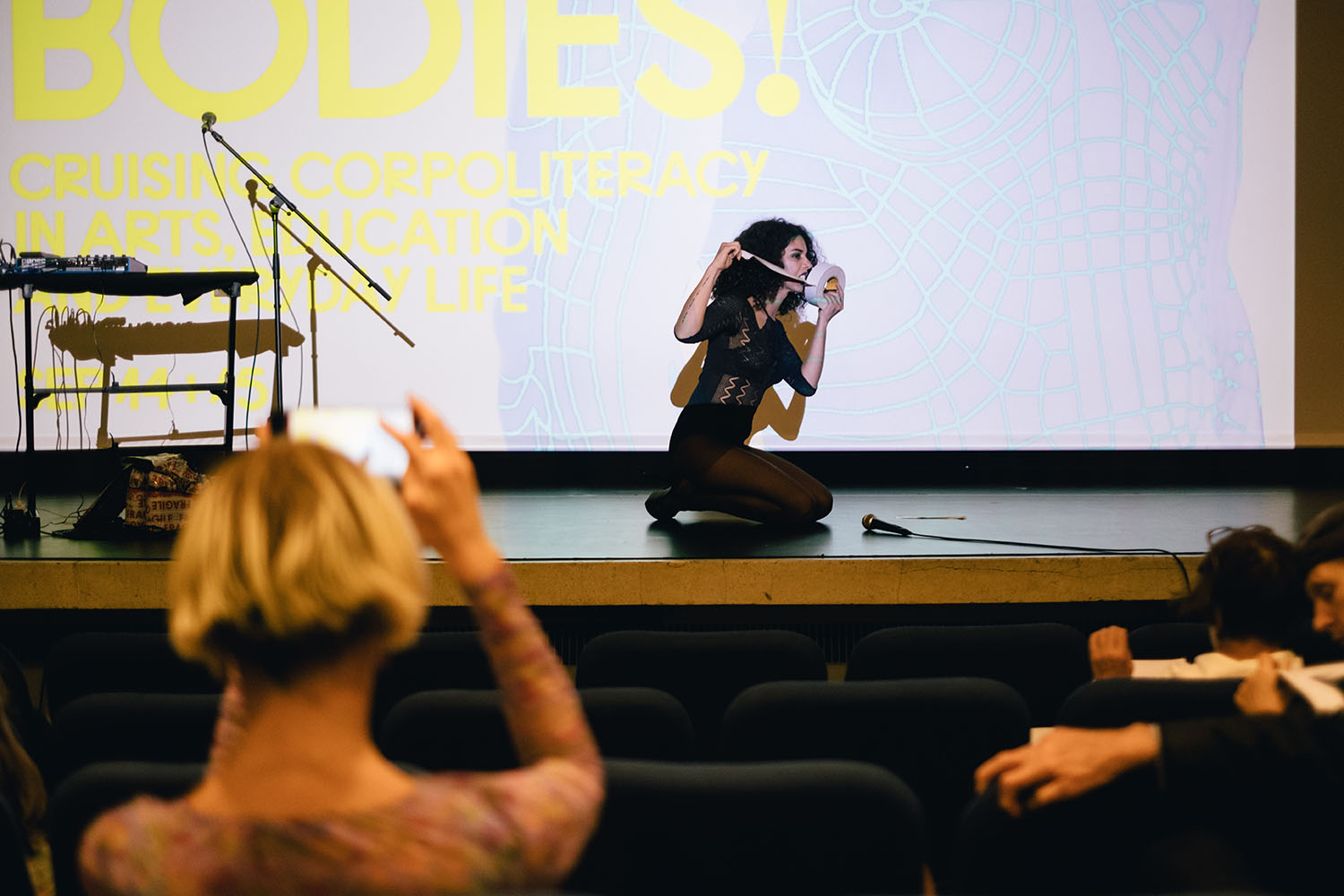 Now in its eighth edition, Berlin Art Week is a victim of its own popularity. Spanning five days (September 11–15), the event begins with openings at major art institutions and museums; these are followed by the city’s two art fairs, art berlin and Positions, located in adjacent hangars of the former Tempelhof Airport; and then the focus shifts to galleries, private collections, and project spaces. In practice, everything ends up being lumped together. If you are lucky, you manage to finagle your way into one of the oversubscribed evening events, particularly at one of the venues advertising live music and “club nights,” where one might otherwise queue for hours without any real prospect of getting in. Having failed to gain admittance to some of the most talked-about events scheduled for Wednesday evening — namely STATISTA, the grassroots urban development project taking over the vacant Haus der Statistik in Alexanderplatz, and the timely group exhibition “Durch Mauern gehen” (Walking Through Walls) staged at the Gropius Bau to mark the thirtieth anniversary of the fall of the Berlin Wall — I headed over to the Akademie der Künste by the Brandenburg Gate for the opening ceremony of “Magic Media – Media Magic: Video art since the 1970s from the Wulf-Herzogenrath-Archive.” Gifted to the Akademie by the current director of its Visual Arts Section, who curated the media section of documenta 6 in 1977 and helped establish video art as an artistic medium in Germany, the extensive collection charts the development of video art from its inception until the present, with a particular focus on the work of Nam June Paik.
A seminal work by another pioneering figure who experimented with video and television media in the 1960s and ’70s was on view that night at ACUD Studio, in a quieter part of town with a neighborhood feel to it. Curated by Atelier Impopulaire (Pia Bolognesi and Giulio Bursi), “Aldo Tambellini – The Black TV Project (1969–2019)” pays tribute to Black TV (1968), a chilling portrait of America at the height of the Vietnam War based on footage from TV news broadcasts, which won the Grand Prix at the Oberhausen Film Festival in 1969. Shown on multiple monitors, the re-edited version of Black TV at ACUD Studio evokes its original presentation at The Black Gate Theatre, which Tambellini co-founded in 1967 with Zero Group member Otto Piene in New York’s East Village.

The marathon’s second day kicked off with a visit to Schering Stiftung, named after the pharmaceutical company that established it in 2006. Working in collaboration with the art collective Scent Club Berlin, artist Anna Virnich created a multisensory environment designed to appeal to the “lesser senses” of smell and touch for her solo presentation “Hyperdrüse.” Visitors were encouraged to walk barefoot or in slippers over airshafts transformed into a pathway around a floor-based work that dominated the room. Peeling off in places, the thin, fleshy-pink beeswax strips inevitably — and a touch gruesomely — recalled sinews and human skin turned inside out, whereas the yellow puddles of aromatic oils sitting in their midst conjured bodily fluids.
En route for Flughafen Tempelhof, we stopped off at KINDL – Centre for Contemporary Art in the uber-hip Neukölln area. The space is located in a former brewery that closed in 2005 and was subsequently bought by collectors who turned it into a sort of kunsthalle without a permanent collection. KINDL’s lofty, perfectly square brick Kesselhaus (Boiler House) currently houses a site-specific intervention by Bettina Pousttchi. Titled Panorama, it skillfully blurs the boundary between indoor and outside space by means of eight floor-to-ceiling photographic prints carefully positioned to look like additional windows where there are none. An entire floor of the main building is occupied by film installations and video works in which Norwegian artist Bjørn Melhus impersonates different characters, from a self-promoting and narcissistic artist in the grating Can You See My Art? (2018) to a robot with a high degree of emotional intelligence in Sugar (2019).
Although exhibitors may be faced with some technical challenges when displaying artworks in what was once an airport terminal (pigeons flying about the place are not exactly a reassuring presence), you’d be hard pressed to find a more evocative art fair venue. The vast former airfield that Berliners have claimed as a recreational space still bears traces of the city’s divided past, notably a model of the “Rosinenbomber,” from which American and British soldiers famously dropped raisins and sweets for children along with vital supplies during the Soviet blockade of West Berlin in 1948–49. Near it, artist Daniel Knorr’s outdoor installation with colorful flags strung along the curved facade of the airport building may be read as a symbol of fraternity.

The meaning of the black snail that inches its way across a yellow book cover bearing the title BERLIN since 1989 in Elmgreen & Dragset’s sculpture mounted onto a plinth at König Galerie’s stand is open to interpretation. Playfully co-opting the yellow and black colors associated with the Berlin Art Week brand, the Berlin-based duo’s work relates to the thirtieth anniversary of the fall of the Berlin Wall.
Located in Mitte, where it moved thirty years ago so as to be closer to the new city center, the Neue Berliner Kunstverein (n.b.k.) celebrates its fiftieth birthday this year. Housing a remarkable video art collection available for public viewing and the art-lending Artothek, both set up in the 1970s, the n.b.k. was among a handful of institutions and project spaces to tackle the subject of the capital’s changing fortunes since 1989 with its engaging “1989–2019: Politics of Space in the New Berlin” exhibition.
Curated by the independent ARCH+ magazine, which temporarily set up shop on n.b.k.’s premises to work on its next issue, this group show critically examines various myths associated with the city, chief among them that of the “poor but sexy” Berlin, as Mayor Klaus Wowereit dubbed it in a bid to market the capital as a cultural hub. Many of the problems that the city and its sizeable artist community face today, which boil down to a shortage of affordable housing and studio spaces, have their root in neoliberal policies that made the sale of city-owned real estate possible from the 1990s onward. Florine Schüschke’s floor-based map that visitors walk over as they enter the downstairs gallery space marks out in black all the city’s privatized spaces, which combined make up an area larger than Kreuzberg.
Day three of our whirlwind tour of Berlin Art Week and its offerings started out at the Kreuzberg Pavilion — in fact, one of the nine project spaces showcasing works by those in the running for the Berlin Art Prize, an artist-run alternative to the more established Preis der Nationalgalerie whose winner this year was Pauline Curnier Jardin. For his solo presentation, Canadian artist Joshua Schwebel chose to draw attention to the state of permanent uncertainty in which Kreuzberg Pavilion is held due to the volatile rental market. Schwebel wrote an official letter to Deutsche Wohnen — among the largest and most ruthless housing companies currently operating in Berlin, which happens to be Kreutzberg Pavilion’s landlord. The framed letter was exhibited in the space alongside some subtle, if not entirely convincing, spatial interventions meant to uncover hidden layers beneath the building’s deteriorated fabric. 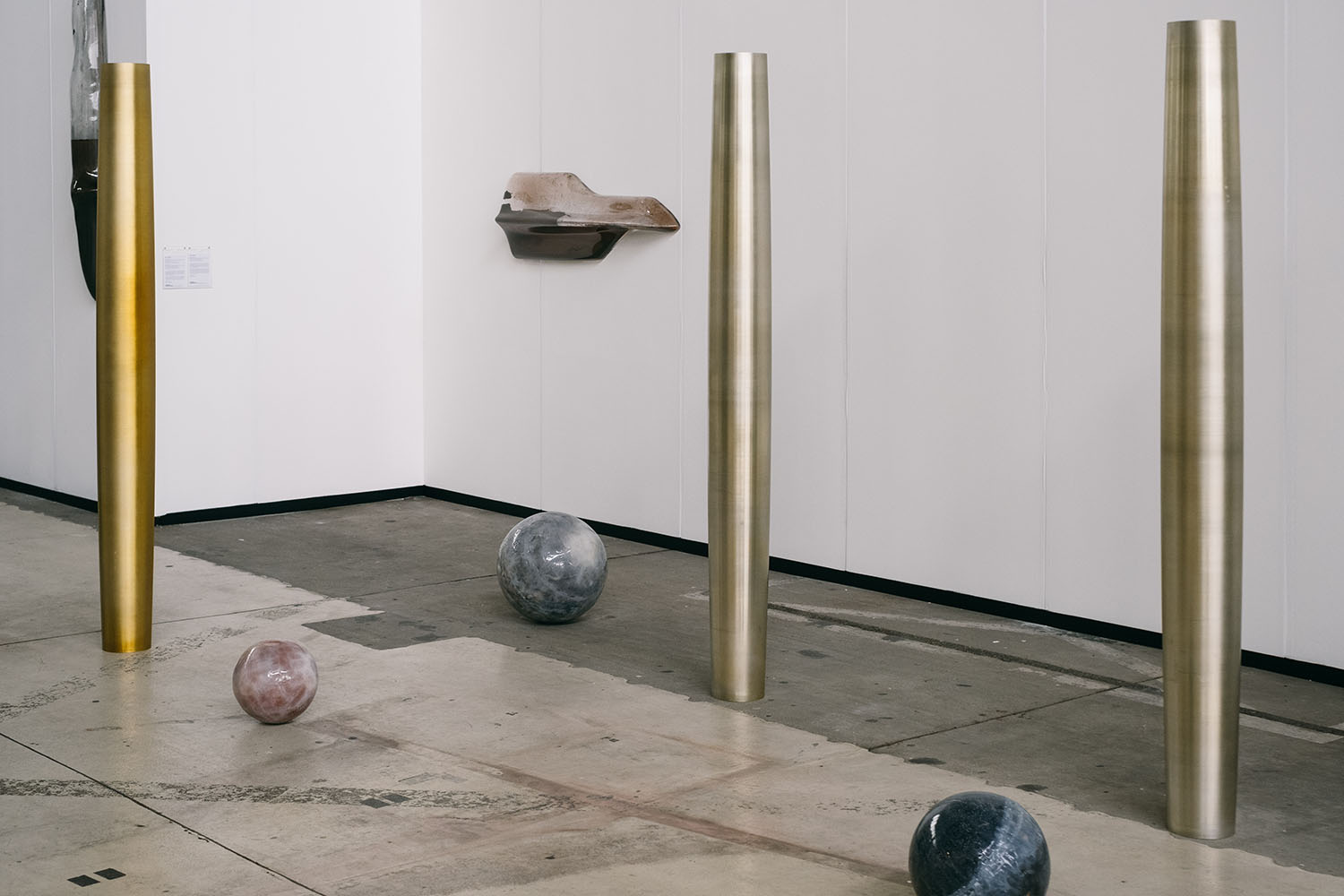 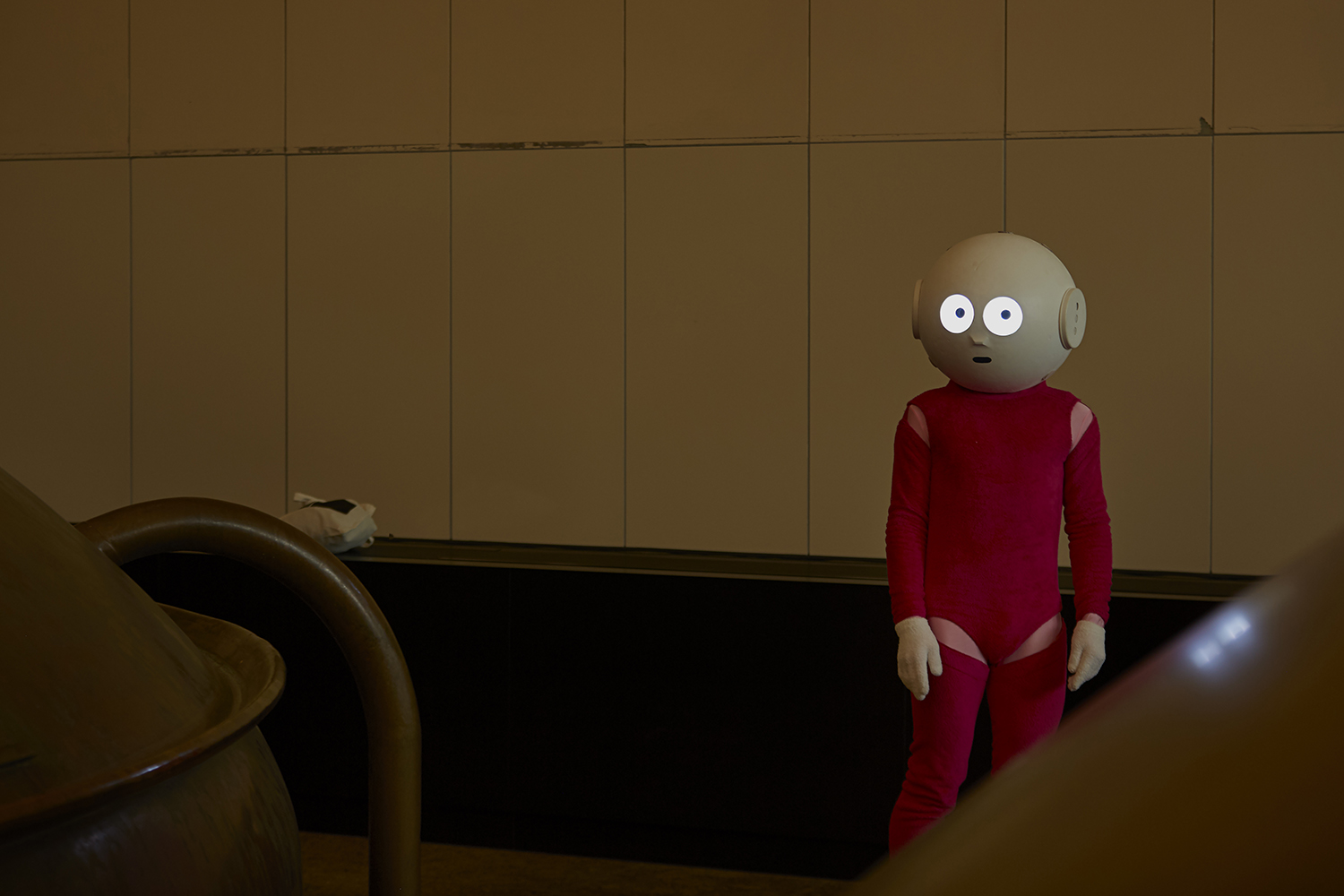 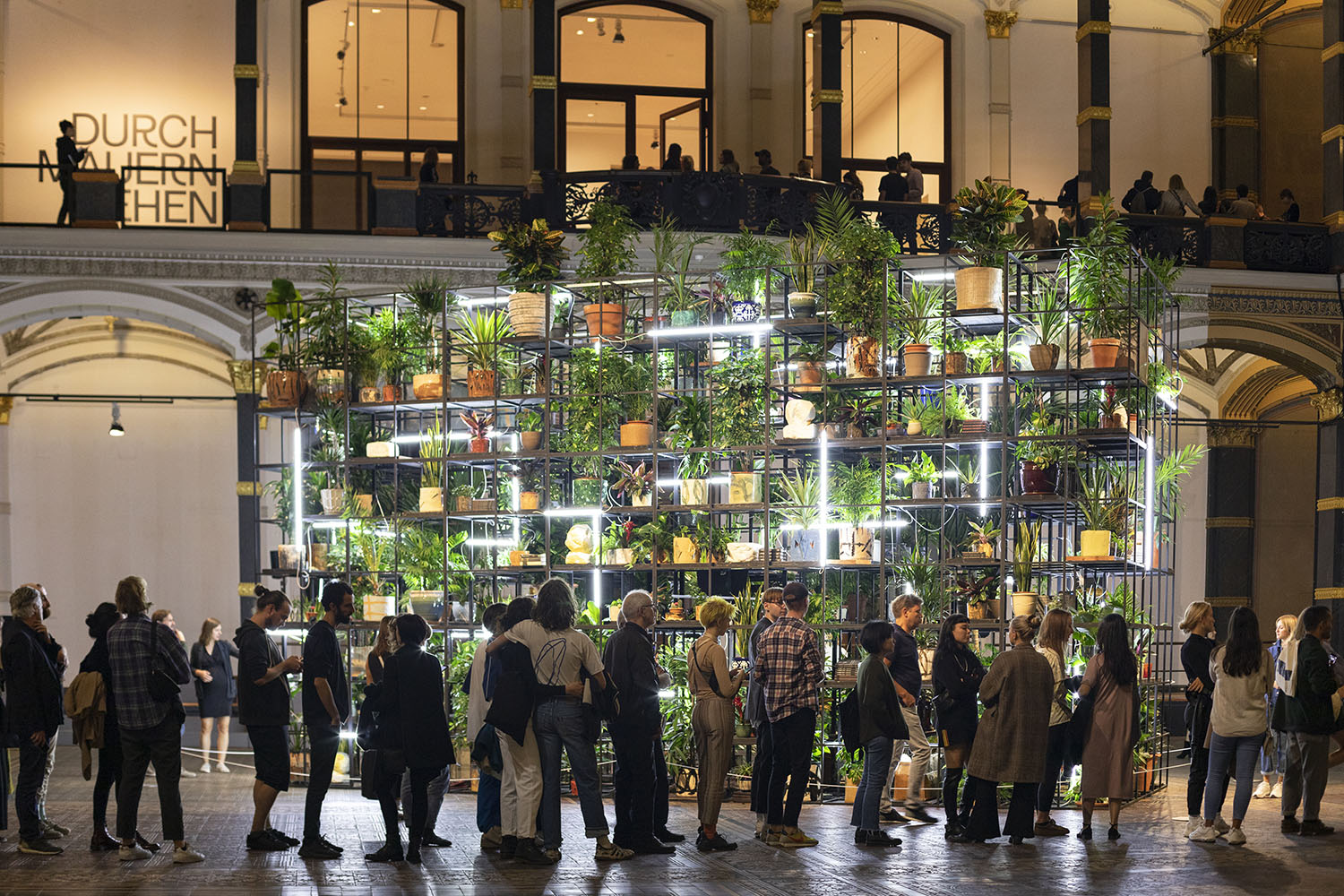 By far the most exciting self-organized initiative included in this year’s Berlin Art Week program is the STATISTA project at the vast Haus der Statistik. To find it, I was told to look for the only building in Alexanderplatz with no windows; they were removed for safety reasons in 2015, as I found out from reading the illustrated vignettes relating the history of the HdS complex in Thomas Rustemeyer’s attractive folded screen found in the Documentation Room on the ground level. Slated for demolition, the building that briefly housed the Stasi Records Agency was saved thanks to collective action and is now collectively owned. The forty thousand square meters of available space will soon become artist studios, workshop spaces, and affordable flats, and will house a city hall and its administrative offices for the Berlin-Mitte district. From a neighborhood choir signing utopian songs about the city to alternative currencies like the Beecoin or the Statista coin designed to operate on the microeconomic level, these small-scale ventures, housed under one roof at the HdS, show Berlin at its best, living up to the myth.