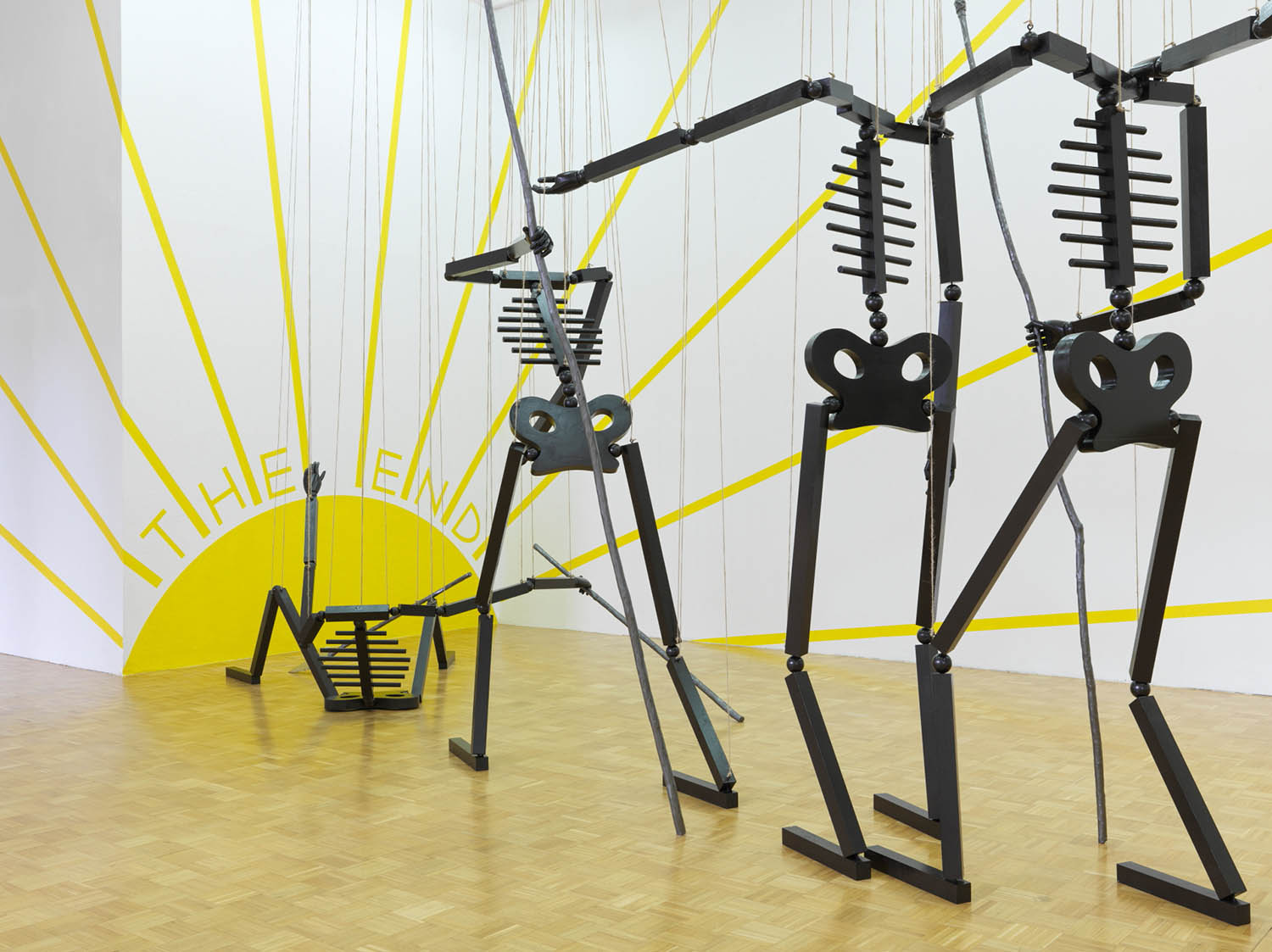 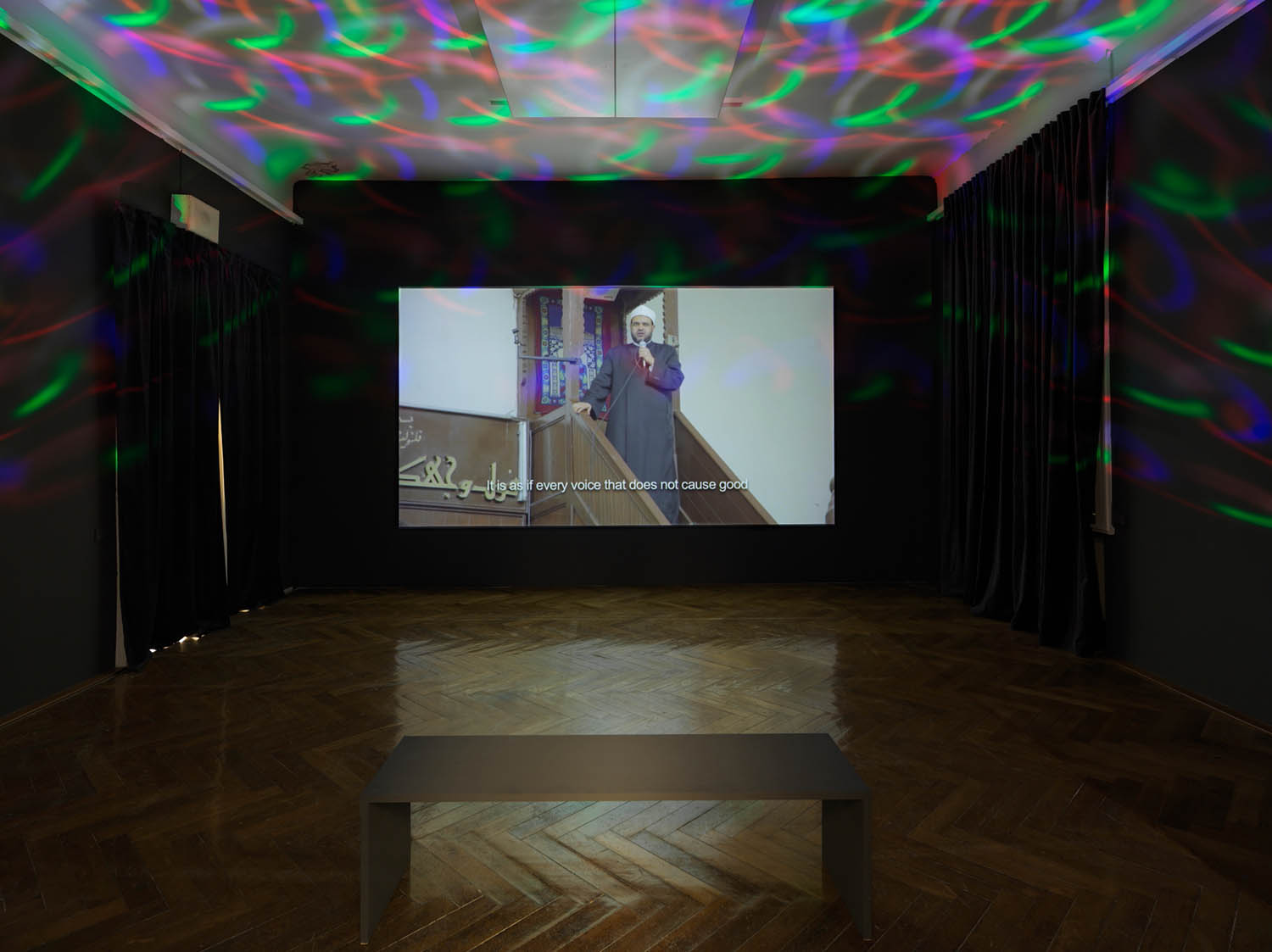 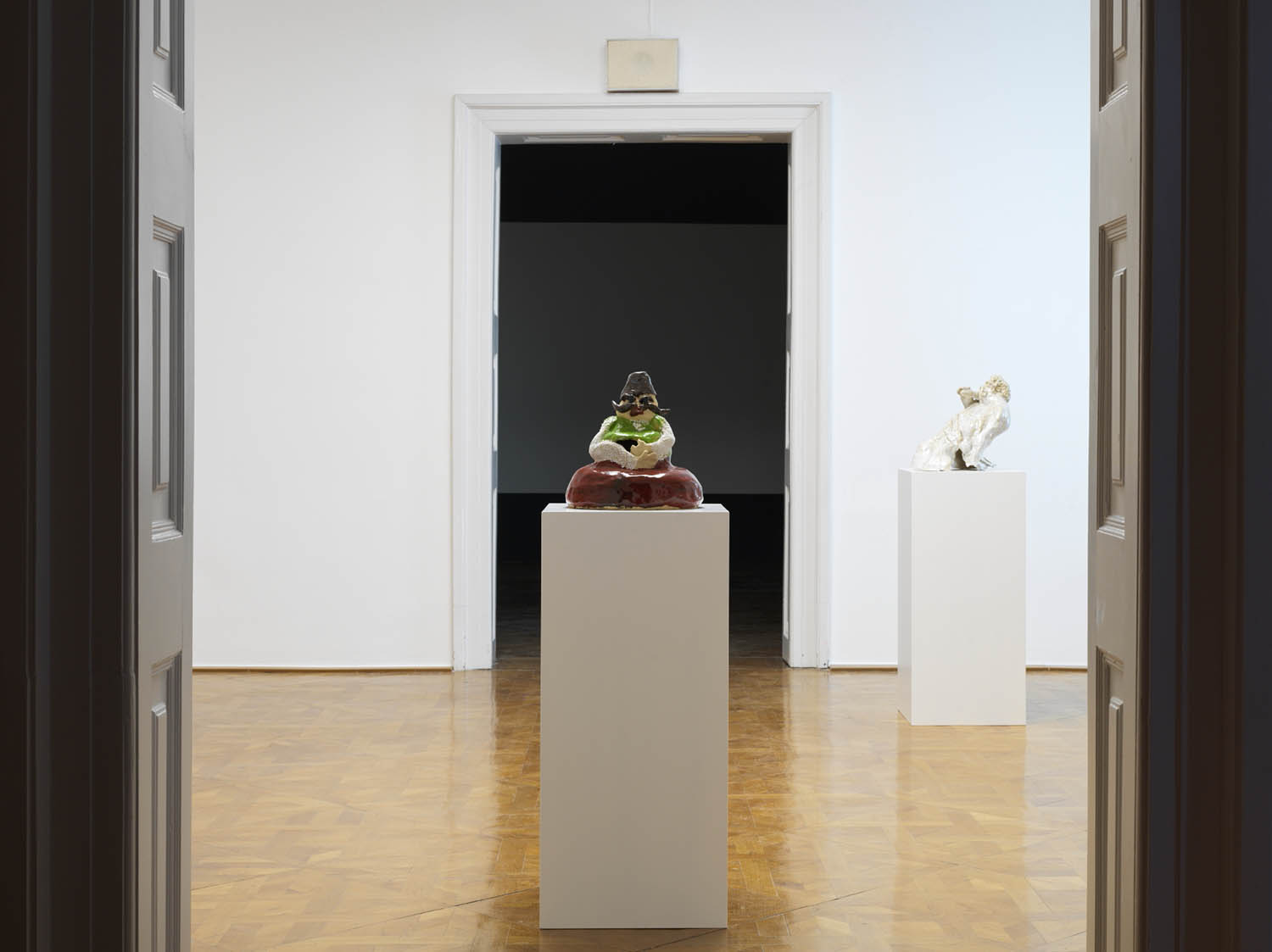 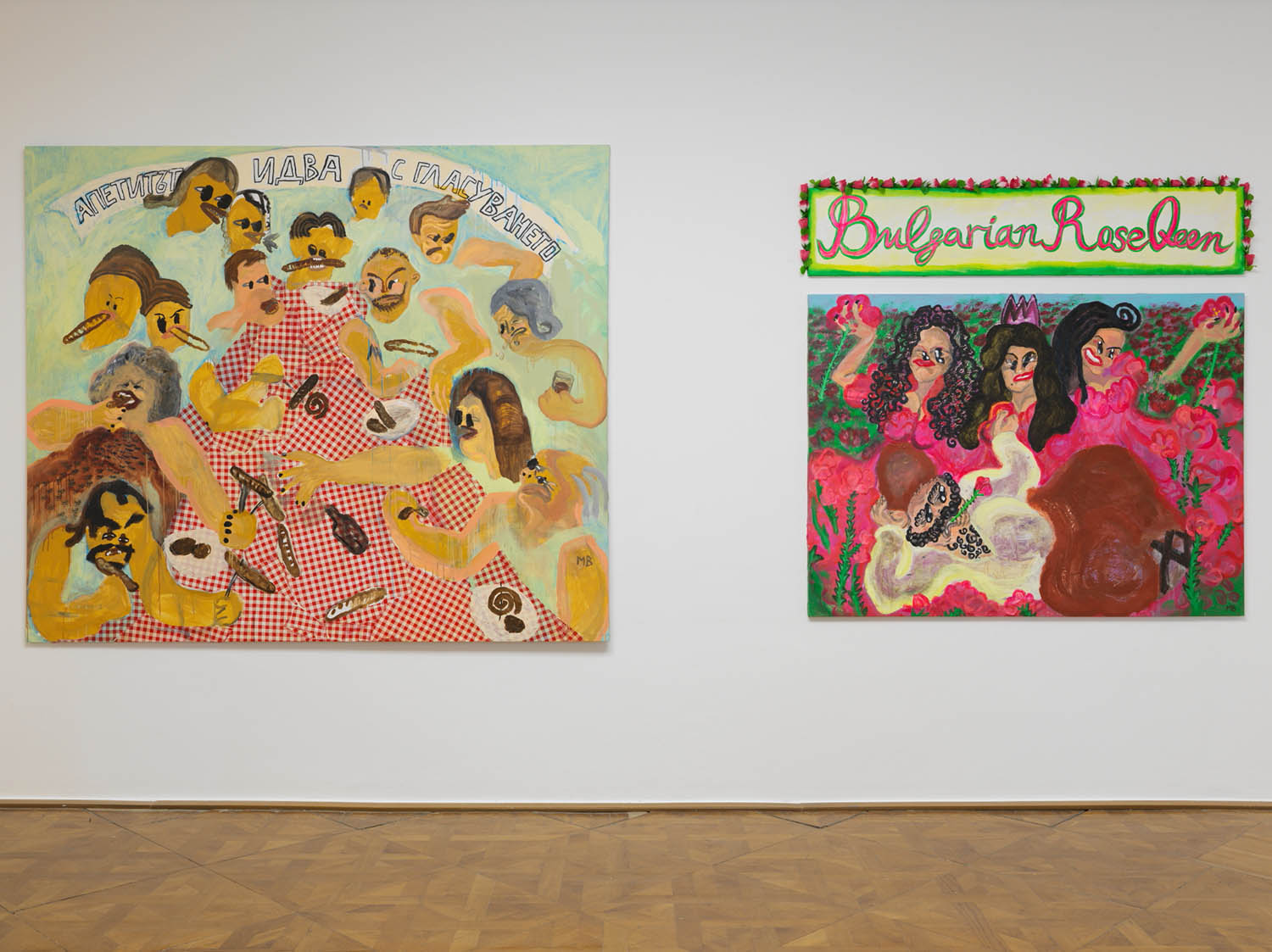 What is the place of comedy in a groundless world? Amid the volatility of contemporary society, where claims of truth, ethics, and politics are challenged at the speed of a proverbial coin toss, comedy’s role is deeply ambivalent. A joke about someone can reinforce another’s authority. Yet when mobilized from marginalized positions, humor can divest such authority of its power.

“Crack Up – Crack Down,” the 33rd Ljubljana Biennial of Graphic Arts, takes up this dualnature of comedy—the subversive “crack up” and the despotic “crack down”—and satire specifically, as its central theme. The multi-site biennial is curated by the artist collective Slavs and Tatars, whose polymorphous practice examines the syncretic histories and geopolitics of Eurasia. The collective’s attunement to humorous and ironic moments of cross-cultural contact throughout their work is echoed in their curatorial debut in Ljubljana. The focus on satire moreover aligns with the critical heritage of the Graphic Arts Biennial while extending its scope in new directions.

Founded in 1955, the Ljubljana Biennial of Graphic Arts originated as a meeting point across Cold War divisions. The mobility of print media allowed for graphic arts to be mailed to former Yugoslavia for exhibition from the countries of NATO, the Warsaw Pact, and the Non-Aligned Movement. This internationalist history is reflected in Slavs and Tartars’ curatorial emphasis on the geopolitical conditions of humor, while satire itself evokes the history of graphic arts, as printed matter was (and remains, even in our digital age) the fundamental means of satire’s circulation. Yet most novel in the biennial’s curation is the consideration of the graphic as “an agency” rather than a medium. In doing so, Slavs and Tatars highlight an array of historical and contemporary practices that draw out humor’s affective import, its enduring conviction, and the relevance of its potential subversion.

Hamja Ahsan’s The Aspergistan Referendum(2019), installed across the Biennial’s venues, invites viewers to vote on whether Ljubljana should join the “Aspergistan Federation,” an imagined nation of the “shy, introverted, and autistic.” Winner of the Biennial’s Grand Prize, Ashan’s intervention queries alternate states of possible solidarity, like introversion, while satirizing the fictions that sustain national identity. By naming the work a “Referendum,” which takes the form of ballot boxes, a constitution, a national anthem, and hashtags, Ashan coyly critiques the exits of nations from ideals of cooperation and proclaims reticence as a mode of resistant camaraderie.

At the International Centre of Graphic Arts, various works riff on the geopolitics of satire by presenting parodies of national tropes, particularly through recourse to irony, affect, and eroticism. The grotesque figures of sexualized excess in Martina Vacheva’s painting Bulgarian Rose Queen(2019) deflate national stereotypes of folkloristic femininity. Uncle Greedy(2018), her malformed ceramic statue of the Bulgarian symbol Bay Ganyo, further caricatures the figure’s stereotypical imposition of crude backwardness onto the Balkans. Ferdinand Kriwet’s neologisms on his Text-Sign(1968), like “HOMODELIGHT,” “SODOMESTICK,” “DREAMERICAN,” conflate the vocabulary of sexuality and nationalism to disrupt the grammars of the domestic and normative. Meanwhile, in Lawrence Abu Hamdan’s humorous video The All-Hearing(2014), two Sheiks denounce “bad-sounding call to prayer” and uphold “the position of Islam on noise pollution” in Cairo’s urban space. 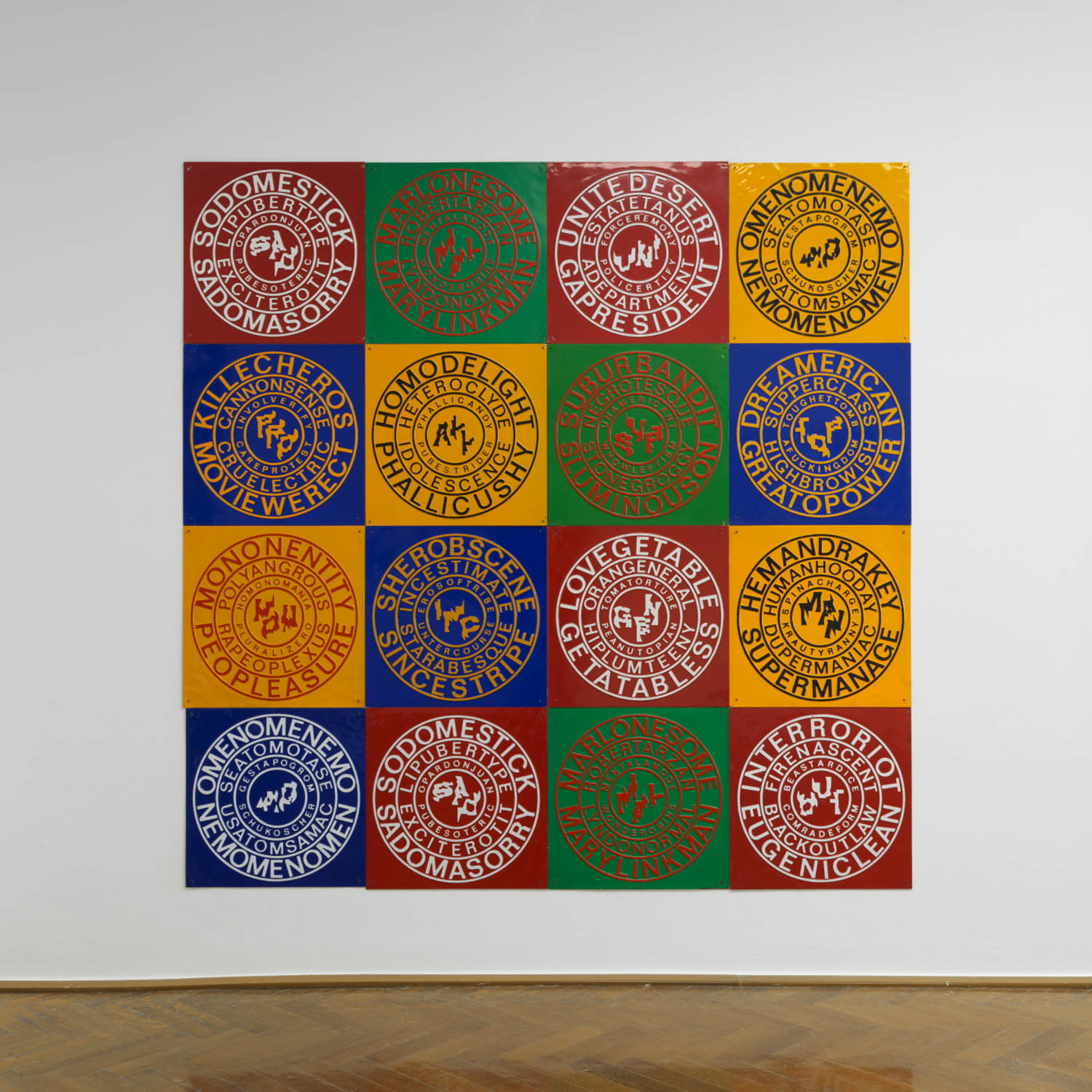 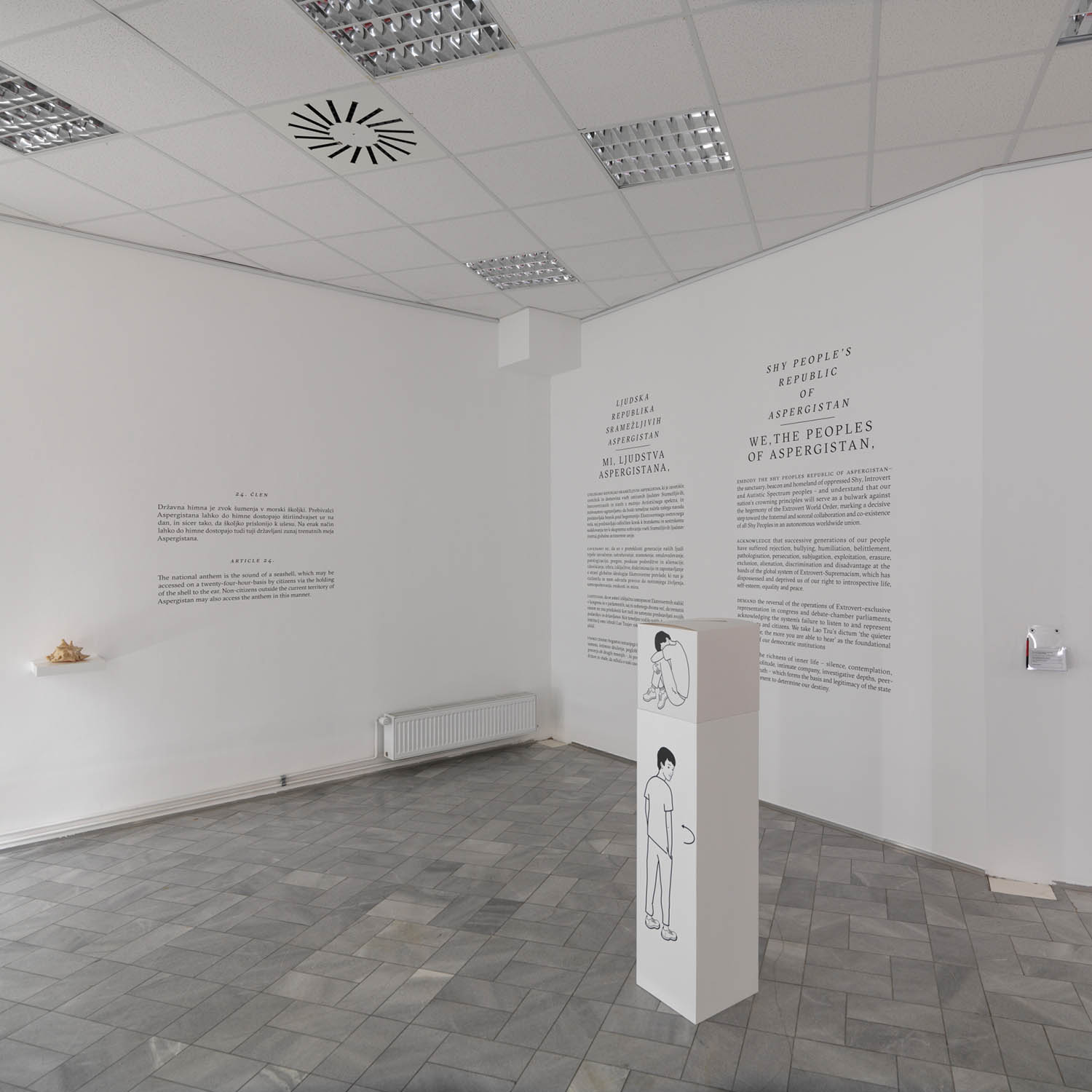 1
2
Hamja Ahsan, The Aspergistan Referendum, 2019. Istallation view at “Crack up – Crack down,” The 33rd Ljubljana Biennial of Graphic Arts. Photo by Jaka Babnik. Archive MGLC. Courtesy of the artist.

At the National Library of Slovenia, designed by the renowned modern architect Jože Plečnik, conceptual artist Endre Tot pokes fun at legacies of modernism. In the newly commissioned If I Am Glad, Tot pairs line drawings with captions that describe his act of mark making. A winding scribble captioned with “I was drawing and writing with my eyes closed THEN I OPENED MY EYES” can be read as a visual joke on Surrealist automatic drawing, yet Tot’s irony strips the surreal of its psychic enchantment. In another, Tot captions two wedged black lines with “I’m glad if I can draw a line upwards and then down again,” humbly jesting with Plečnik’s architectural virtuosity and the sanctity of rigor instituted by the library.

Zhanna Kadyrova’s Market(2019) at DobraVaga also nods to the history of its site. Along the metal tables of the former fish market turned art space, Kadyrova has offered an assortment of ceramic and stone oysters, salmon fillets, and caviar jars; each seafood figurine is for sale by weight at one euro per gram. The heaviness of their materiality—and thus unexpectedly steep price—belies their crafty DIY aesthetic. While the installation evokes the ritualized spaces of communal exchange, Kadyrova implicitly refers to the informal marketplaces that emerged following the fall of socialism and the influx of globalized commodities. Yet the conditions of her objects’ pricing and sale cunningly undermine the ascription of value under contrary systems of economic exchange—and, not least, within a global art market.

At DUM Project Space, Honza Zamojski’s The Gathering and The Meeting(2019) conjures a dystopian spectacle of community. Colossal wooden skeleton sculptures are posed in line in various states of falling, as if stunned by the graphic agency of the phrase “THE END” painted on the opposing gallery wall. Surrounding this puzzling scene, Zamojski’s drawings depict headless quasi-human figures, whose opaque gestures call to mind something like tarot card figures—a prophetic code that remains to be deciphered. Witnessing Zamojski’s theater of catastrophe induces a smirk. To laugh may be a micro-gesture of resistance in the face of the apocalyptic asmuch as an affirmation of it. In the most turbulent of times, when most things aren’t funny—we might as well be.

“The Sharjah Biennial,” an editor of mine once opined, “has always been political, in a quiet way.” This year’s Sharjah…