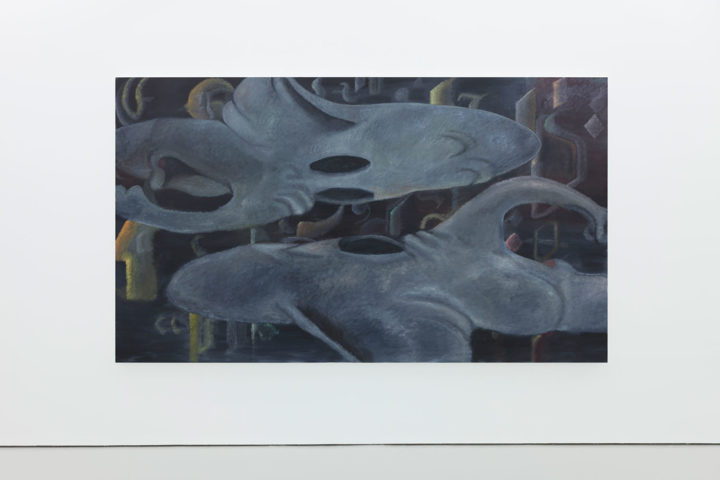 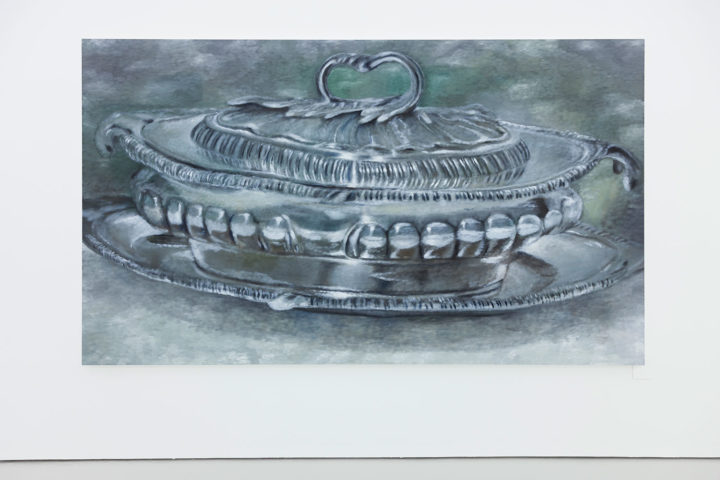 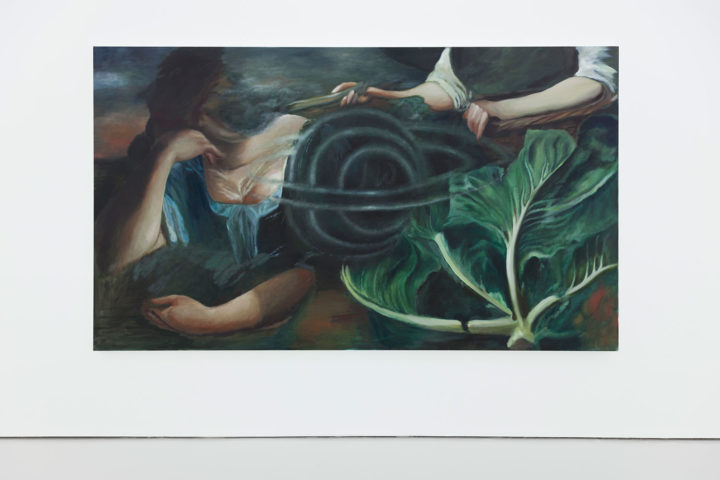 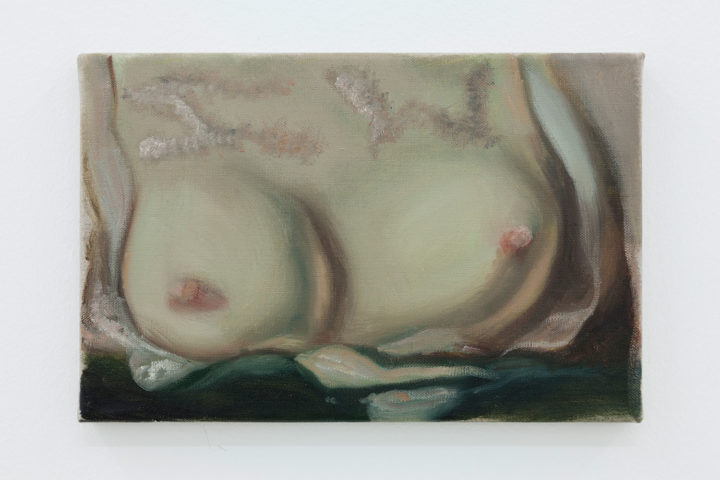 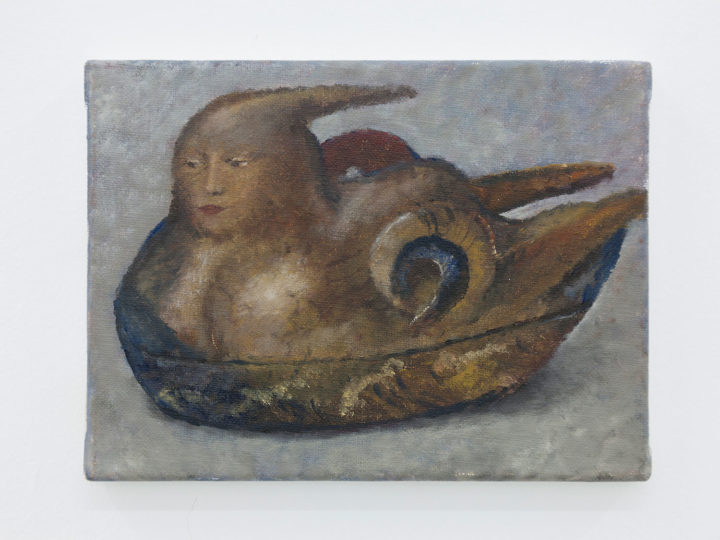 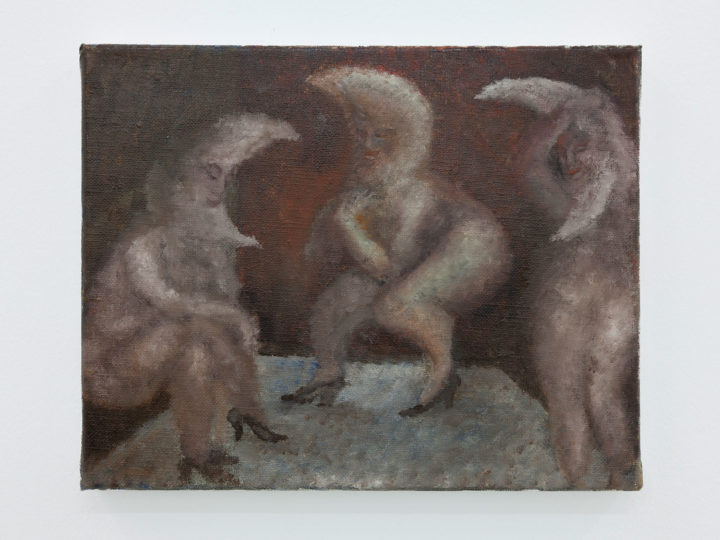 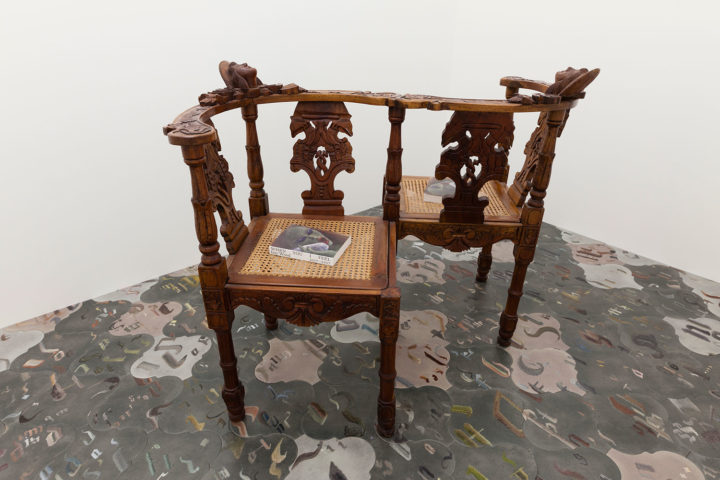 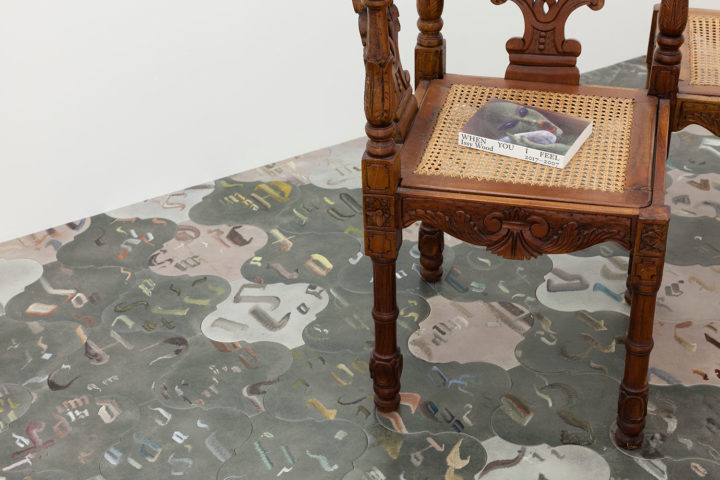 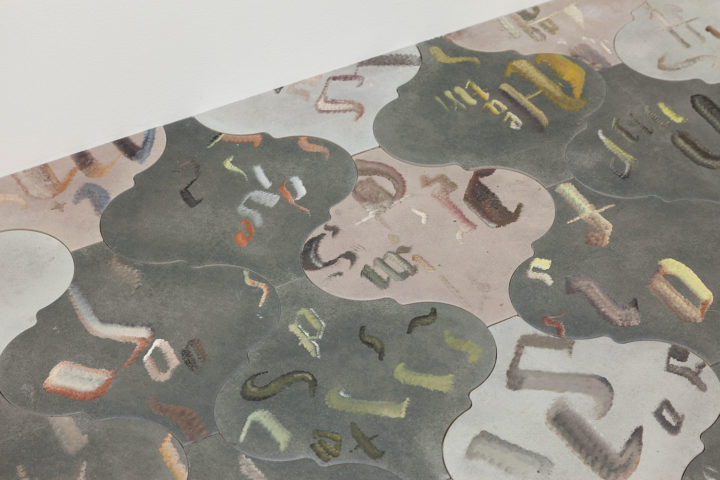 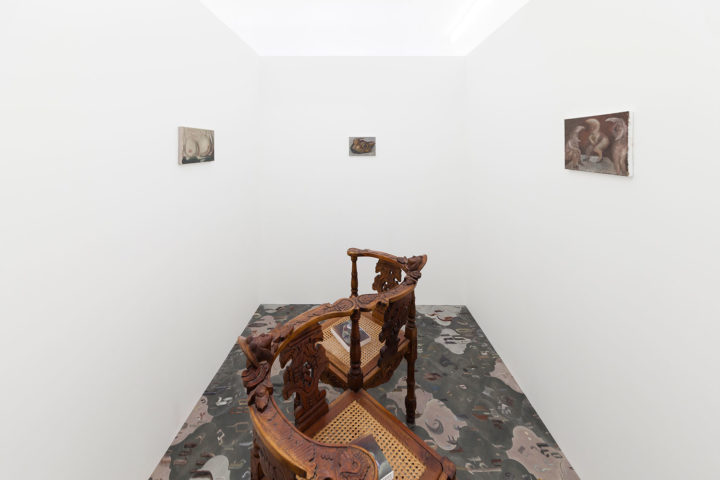 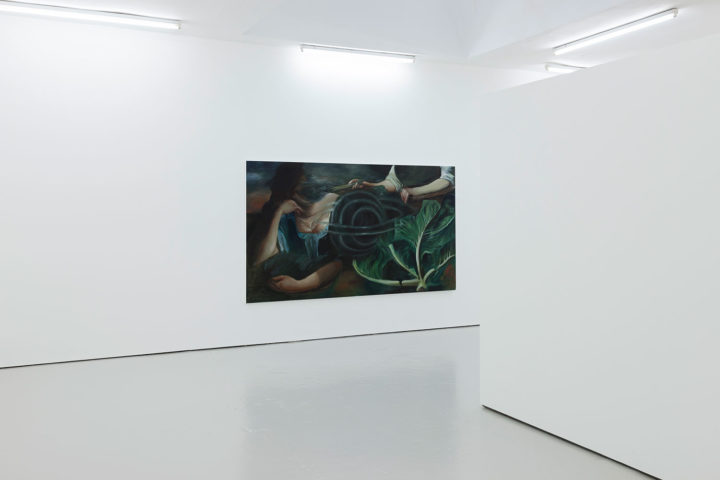 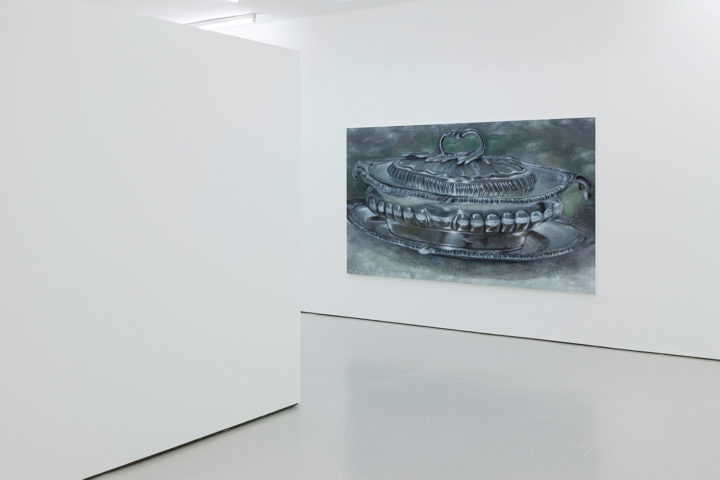 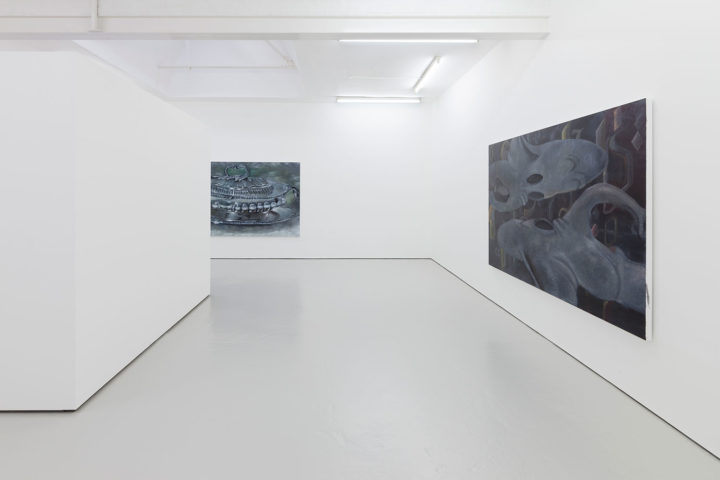 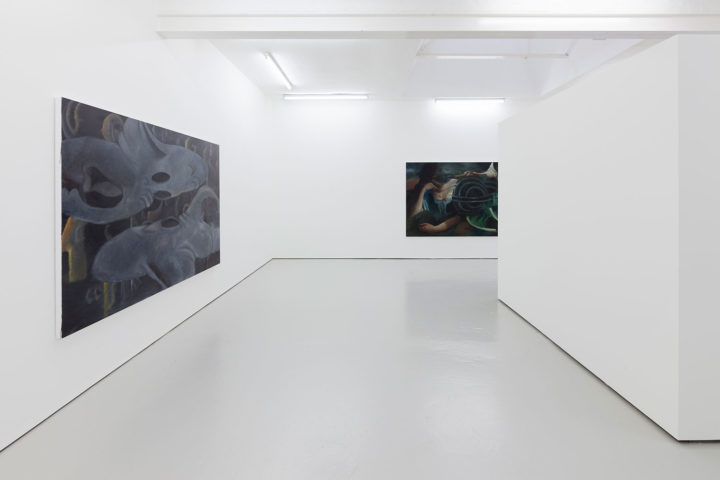 Opulence calls for strong effects; wealth speaks its clout through ornament. To have choice parade as public dilemma evidences a kind of fortune. In the case of Issy Wood (b. 1993, USA), ordeals of the haute-monde and power relations based in the practice of real fantasies are part of an arena that shimmers as delicately feudal lacunae. Her oil paintings are born from a decadent climate populated by silver tureens, flawless manicures, compact mirrors as amulets and the odd, bizarre minaudière. In Back at the V&A (2017), for instance, a black necklace bust displays a wiry, filigreed Art Nouveau necklace. Oil on velvet, it is a frontal and saturnine image.

Such objects speak to a milieu composed of trite concerns, periodically engaged in mini dramaturgy such as consultations, lunches-as-event or vestibule gossip, each weaving a gendered commentary. It is an environment where taste hardens like lacquer, dietary requirements become indulgent declarations and styling bears the tracery of anxiety. Typically working a dark palette, Wood’s atmosphere haunts the elite, blending gothic antique, pointillist incredulity and Jean Dupas contours with allegory and necromancy. Like a monogram, “IW” appears in slippery ways, like a skin rash over breasts undone from corsetry in IW (2017) or as a tempestuous celestial core of Saturn in The Supervision (2017).

Her first solo show in London, “When You I Feel” at Carlos/Ishikawa, consists of three large paintings bordering a central room, its interior floor tiled and chalked with various calligraphic glyphs. A vis-à-vis or “confident” chair, two-seats conjoined in an S-shape, occupies the center — a set for disclosure, a therapy session. Wood’s paintings fall short of proper sexual identity, yet her choice of meticulous ornament generates the greatest articulacy. Though outside of historical category, should a clock start ticking, be sure it’s a Cartier keeping perfectly expensive and excruciating time.

This distance lends Wood’s aesthetic an alien seduction; it also extends Wood’s practice from sadomasochism’s play of violence to an exploration of genuine control. “Glamour” epitomizes what’s on offer here, that is: from early eighteenth-century Scottish origin to mean enchantment, a spell; and from the Latin grammatica, associating glamour as technique, a discipline. Here, glamour is put to use both as instrumental phantomic polish and illusionist, carnivalesque reserve. Arguably, Wood relays a flickering opacity to a culture understood as clear as plastic; you can see more should you want to.

Supplemental to the oil paintings in “When You I Feel,” a book includes notations, sardonic exchanges and diaristic entries from her blog, chewandswallow. On the cover is an alien face gawping into her cell, complete with Brazilian blow-dry, thick rouge at the lip and fresh manicure. Complexion pine green, her eyes are classic mutant: wide atramentous pebbles. Her nose is minute. At once earthen and nebular, her gloating is fossilized. Though extraterritorial as a woman, one would imagine her frequenting Harrods on the hunt for a fresh autumn stole.

It is through Wood’s writing that location becomes tangible. She is well aware that desirability rearranges space, and that solitude can accelerate the mind’s decay. Oftentimes, her attention is toward the female elite whose diaries are littered with consultations with the local surgeon and diagnoses from their svelte, modish dietician. In the dialogue THE HEART TO HEART, surgeon (2) and patient (1) renegotiate anonymous stretches of skin. “1: Somone’d better really encroach on my personal boundaries in the workplace after all this. 2: Oh you needn’t worry, and I can assure you he will be a GQ subscriber. Let me show you my pen before I begin my annotations, here it is.” The entries read like episodic vignettes and apologia, often mid-crisis, accusation or realization: “I am dripping in jewelry I am completely riddled with accessory oh god the EMBROIDERY.” (For Wood, epidermal strain is never far from adornment.) Polarities are assured, there is a predator, and there is prey. Peppered with imperatives, parochial whining and incidental tragedies of luxury, these notes are close to a body aware of medical enhancement, amplifying a psychology footloose. As though sampled from the doldrums of Sex and the City, the tone is both beleaguered and rapturous; seeing high society with both a medieval and dystopic spirit.

Grand dame of plastic artifice, American comedian Joan Rivers has made several appearances as surrogate in portraits of Wood’s mother, and in many ways Rivers’s scathing and indulgently vulgar stand-up echoes Wood’s writing. In Free to Chat (2016), her winking turquoise face hovers amid lunar cycles; in mother as young joan rivers (2016), a sweeping, tucked brown bob meets a vulpine gaze.

Rivers was a unique example of high society that reckoned with stardom via the expulsion of its vulgarity. She became a bastion of its mocking, using herself as damage control. Her life is something we may look back on and embellish, though to be a star, you also have to be a bit of a monster.