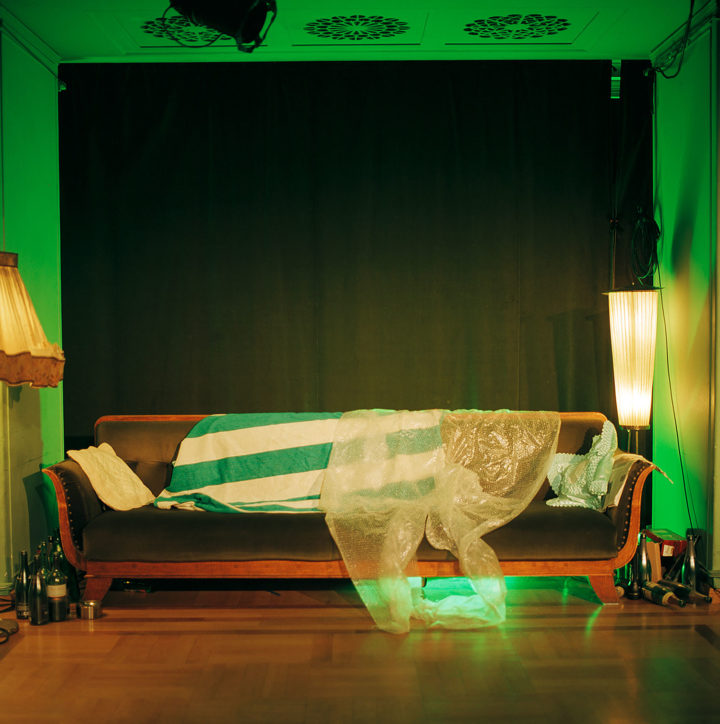 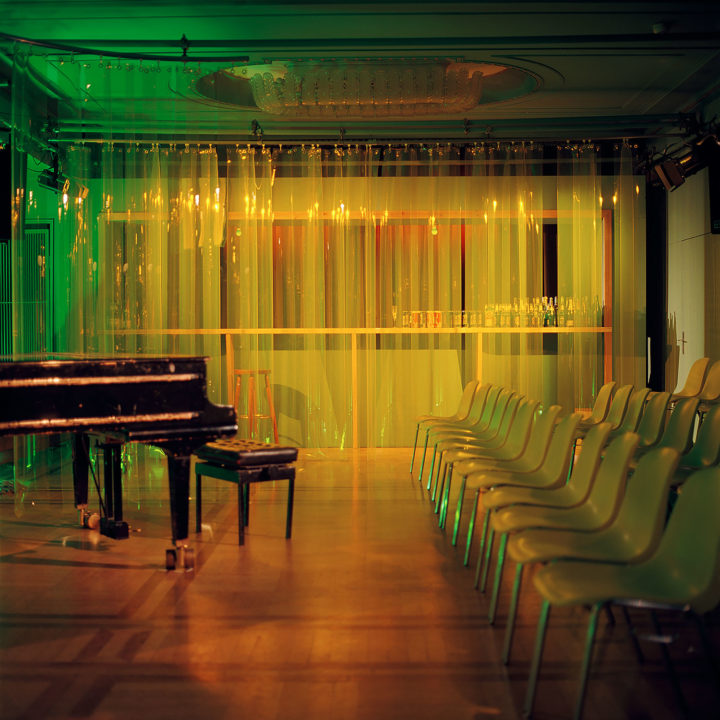 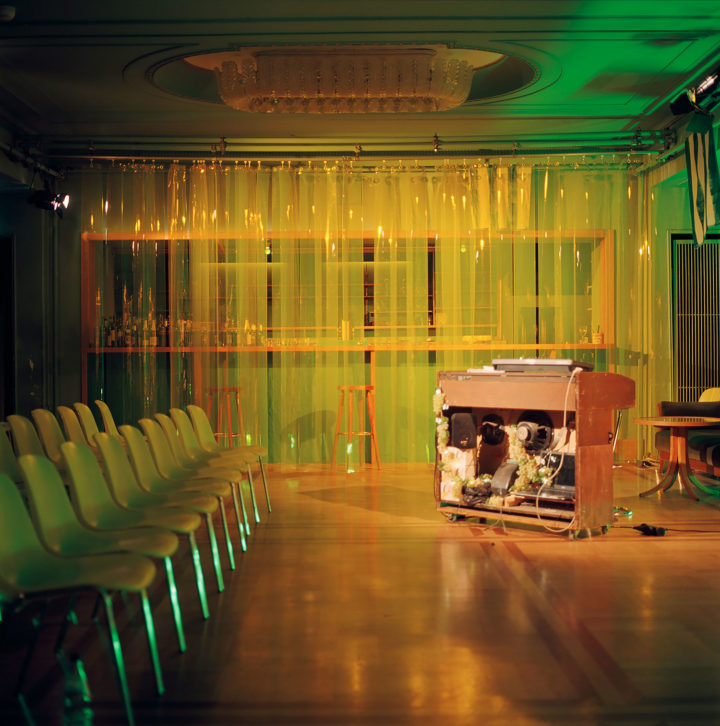 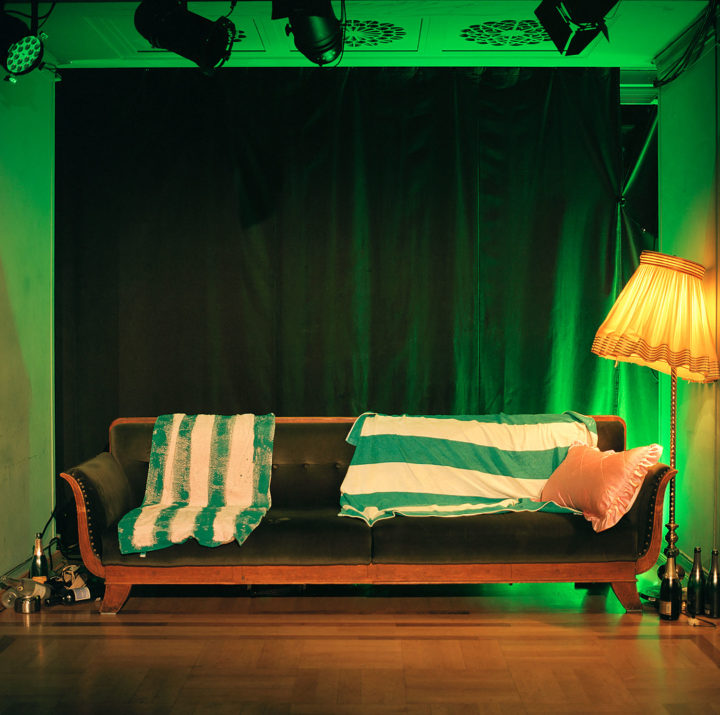 News Crime Sports (2017), the new musical by artist duo Calla Henkel and Max Pitegoff, takes place on a cruise ship lost at sea. As its passengers yearn for firm ground beneath their feet, the ship only drifts farther off course.

They take turns delivering verbose speeches into the void and rambling about the past. The play inaugurates Henkel and Pitegoff’s season at Volksbühne Berlin’s Grüner Salon. The theater itself has recently experienced a sea change by way of its controversial new director, Chris Dercon. At the time the duo began their work at the house under Dercon, it was being squatted by activists protesting his appointment and the city development it suggests. In News Crime Sports, the cruise ship’s staff goes on strike. The American duo gush about the lively political discourse at Volksbühne, and its employees’ dedication to the theater. They also praise the technical expertise of its various departments. It has been a hectic production in many ways, but Henkel and Pitegoff are accustomed to running their own very DIY New Theater. Naturally, the poetic quarreling aboard News Crime Sports is reminiscent of the complex set of relationships currently being renegotiated at Volksbühne. Art imitates life, huh? Ahead of the second set of performances, they took me below deck, to the theater’s wood-paneled, smoky and enchanting canteen.

Bianca Heuser: What has working at Volksbühne been like for you?

Calla Henkel: What’s so amazing about this house is that it is possible to really produce work here. Usually, we encounter art institutions as places to put things, but this a temple to keeping things alive. It’s so exciting to learn from people who have worked at this house for so long and know how to attack problems. Everyone is an expert in their respective fields.

Max Pitegoff: Especially after New Theater, where it was just us and a handful of people who tried to do everything at once. Here the process is spread out in a way that is  beyond anything we’ve dealt with before.

CH: The first time I went to the costume department, I was like, “Oh my god, it’s like a museum!” They were like: “It’s not a fucking museum — it’s all usable!”

BH: How has this impacted your production?

MP: We worked on this play completely in the present, as we were constantly negotiating how we work within the house. That really fed into it. Sir Henry, the musical director of the piece (along with Katrin Vellrath), has been part of the ensemble at Volksbühne for many years. His knowledge really influenced us. Though the director has changed, the structure of the theater itself remains more or less intact.

CH: Well yeah, because the beautiful, insane machinery of it still exists. I think we’ve learned more from these months of working here than I have in my whole life. The play is still funny though. It deals with this vacuum of misunderstanding and uncertainty.

BH: Uncertainty of what?

CH: The play is centered around a group of people who are stuck on a boat and have been for long enough to no longer have a concept of time. There’s this back and forth about everyone’s versions of the past and their visions for the future. But they’re also reckless in their inability to worry about anything other than the next drink. The only things they have on the boat are canned peaches and champagne. So it’s this space of rot, social and emotional rot. Lily McMenamy’s character grows up over the course of the play.

CH: The only character with monologues that feel honest. There’s this tension in imagining the future when it feels hopeless — since you’re stuck on a boat in the middle of the ocean.

BH: What’s appealing to you about the idea of people being stuck together?

MP: A great part of it was dictated by the space itself. There’s no backroom at Grüner Salon, so we started imagining the story of those seven performers stuck on stage together. Our past plays have also dealt in different ways with people being stuck together.

CH: Or being mentally stuck.

BH: Your characters at times appear stuck in their relationships, too.

CH: This piece really tries to deal with that. In one scene, the character played by Mia Von Matt says: “Seelen reisen in Gruppen.” Souls travel in groups. Even if we all jumped off this boat together, we’d all just come back to life as a bunch of tarantulas in a terrarium.

BH: How does that relate to you?

CH: Oh, to our own toxic relationship? [all laugh] We really have to be in love with people in order to write for them. The way none of these characters actually listen to each other is not just bleak. Sometimes you stop listening to people to continue to be able to love them. But theater is about conflict.

BH: Like the newspaper segments of the play’s title: “News Crime Sports.”

CH: We were thinking about the cycles of a city, how shit gets passed back and forth between people. It’s also everything that’s absent from a boat. The sport comes out of annoying each other.

MP: The crime comes out of annoying each other, too.