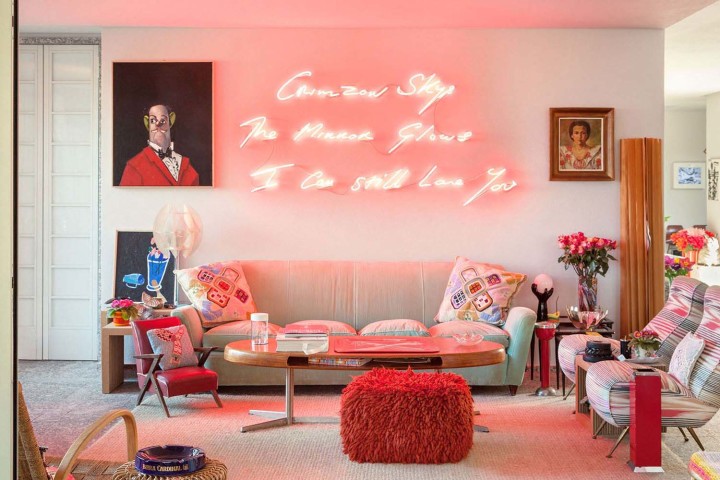 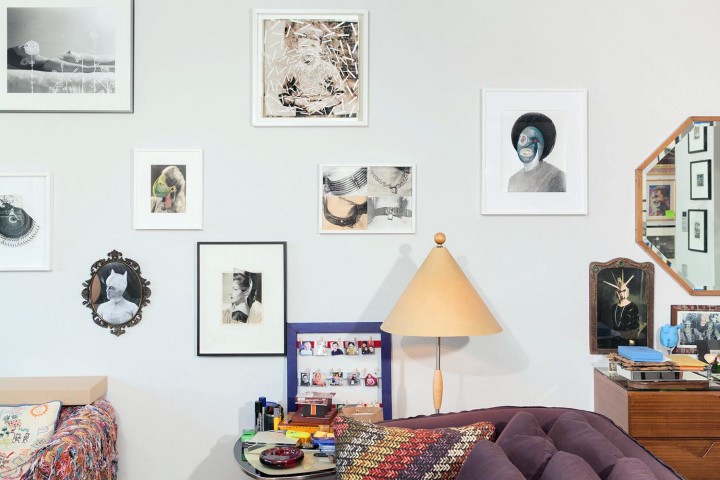 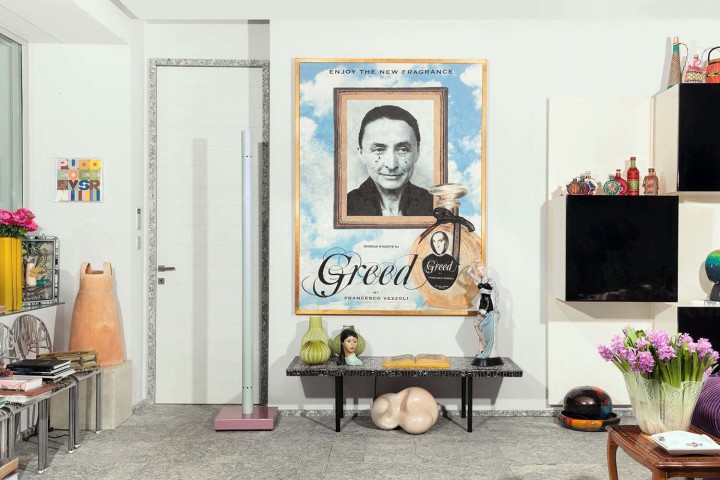 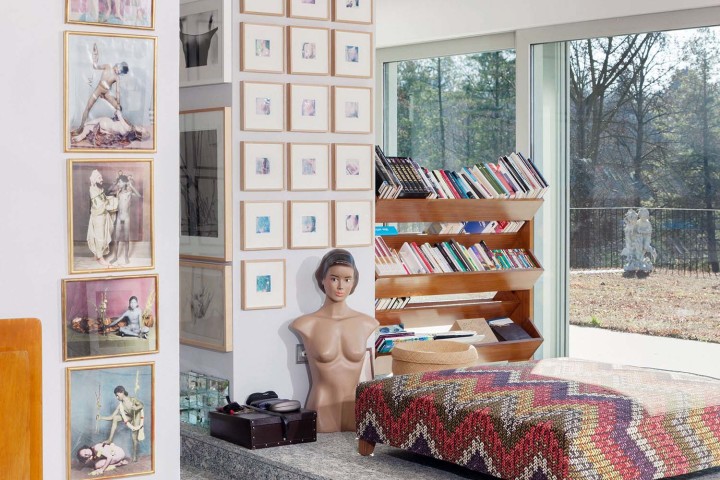 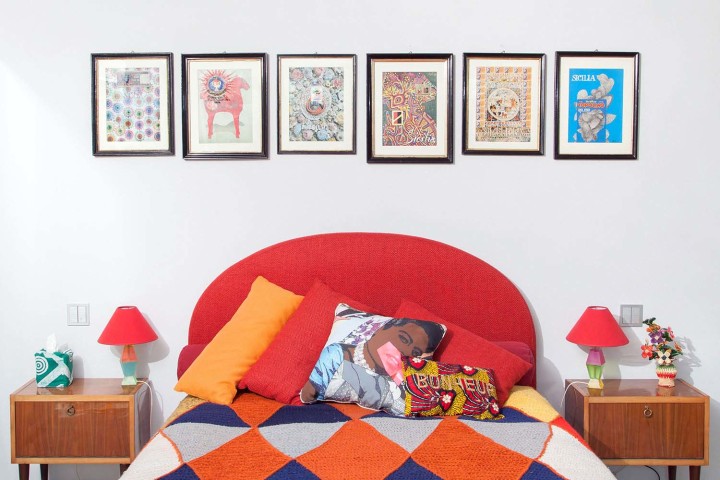 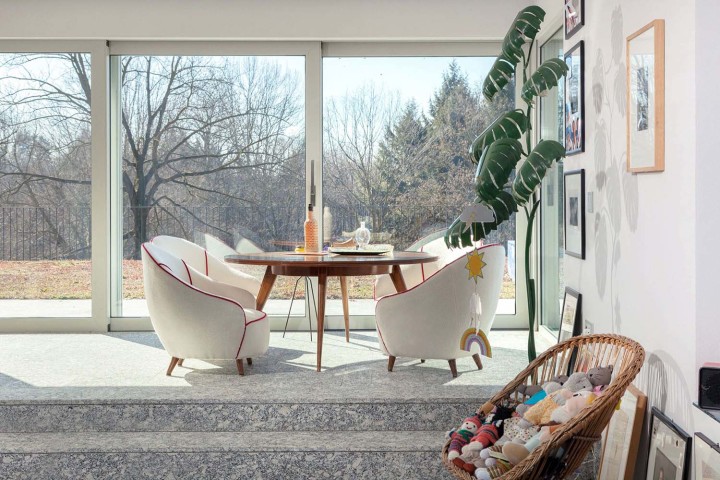 Il Collezionista is a new column curated by Gea Politi and Giulia Gregnanin. Structured around a series of interviews with crucial figures in Italian collecting, the column will survey the attitudes, tastes and outlooks that have shaped a wide range of unique collections.

Gea Politi: Angela, your art collection is eclectic and varied. How would you define it?

Angela Missoni: If one were in a different era one might describe the collection as a cabinet of curiosities. I am not a collector, I am an assembler. I have collections of many things.

GP: Yes, because this is not only contemporary art. You buy as much in markets as you do in galleries, without differentiating between the two; it seems to mirror your way of being.

AM: If someone asks me where the skill comes in, I answer “the eye.” I see with a level of definition not entirely common. I live trying to improve that which surrounds me, from the dresses to the rooms themselves. I am in a constant search for harmony, for my sake and for those who live and work with me. Another trait is that I look ahead. I am compelled toward the future while trying to enjoy the present and preserve a significant past. I grew up as part of a company, and all my memories are linked to the dresses and the details. I remember every single dress from the runway at Teatro Gerolamo, Milan, in 1966 and from Palazzo Pitti in Florence the following year. I was seven at the time. In twenty years as artistic director I have maintained the Missoni identity while also reinventing it over the period, lending an impetus born of a bold recklessness. I have adapted and updated the vocabulary of the Missoni style, invented by my parents sixty-five years ago, by injecting the words of a discourse both familiar to me and contemporary with me.

Giulia Gregnanin: I was wondering if those two qualities — attention to detail and forward-thinking — have influenced your collection of contemporary art.

AM: I don’t know if they have influenced me, but if they have, it is in terms of spontaneity. There is art and there are also nonart objects. For example, you’ll find glass bottles, a Do Ho Suh piece, the little details of the Branzi libraries — all are in dialogue in the same space.

GP: Do you buy these objects because they remind you of something?

AM: I purchased these because they attracted me and I recognize that some objects take me back: from the furniture, which often comes from a house in which I lived; to the chairs on the veranda that have followed me since the 1980s and were taken from the garden of the hotel I used to stay at with my grandparents in Ischia.

GG: One might describe the works in your collection as mnemonic traces that interweave memories with your contemporary tastes. This crossover is very powerful, also in the joining together of handicrafts and works of art, serving as part of the vocabulary of your collection.

AM: I suppose, yes. I would emphasize that I am not looking for something other than surprise. For this reason I love bazaars, second-hand markets, anywhere that might offer a twist.

GP: Is collecting a family passion?

AM: Certainly it is for my mother. My tastes are an evolution of hers. I know her taste perfectly and she knows mine. Today she appreciates the things she didn’t consider before. My parents live in an eclectic house, highly personal, where the valuable and the valueless cross over. They started out collecting the works of friends, from Luciano Minguzzi to Roberto Crippa, but those were different times. In 1972, when we moved to Sumirago, my father painted eight works “to hang on the walls,” because we didn’t have enough money to buy anything else. The paintings were presented at MA*GA (Gallarate) at the exhibition “Missoni. L’arte, il colore” (2016).

GP: And afterwards, did your parents start collecting works other than those of their generation?

GP: A lot of Italians there, a strong attachment to roots. The same seems true for you, even if your collection houses numerous international artists.

AM: Yes, for him strictly Italians, save his countrymen from Croatia — or Dalmatia as he knew it — such as Ivan Rabuzin and Ivan Generalić.

GP: Do you remember the first work you ever purchased?

AM: My father gave me Roger Selden’s totem, on show at Galleria del Naviglio. I was eighteen.

GP: And something you purchased but never sold because of a strong attachment?

AM: I’ve never sold my works. Now I see some works that I bought impulsively and don’t know where to put them. Maybe I should consider selling them, as it’s a pity to leave them in boxes. For example, a very important work to me is that by Aristarkh Chernyshev & Vladislav Efimov at the entrance, purchased at my first Frieze. I’m now grateful I had the chance to experience the atmosphere of the first Art Basel Miami as well as the small collateral fairs. For instance, I bought Máximo González when Scope Art Fair took place in little rooms of a hotel in Miami back in 2004. González presented some works on paper where he’d cut up Mexican pesos.

GP: From what I understand you’ve never bought at auction.

AM: No, I’ve bought some after-auction work but I’ve never really participated in auctions. It’s all that time — I’m not able to follow everything.

GP: Has anyone ever advised you about what to acquire — consultants, dealers, friends?

AM: I’ve many gallerist friends with whom I share a certain perspective. I’m very attached to Mariuccia Casadio, whom I met many years ago. She often asks to accompany me on my rounds at fairs because I don’t get diverted, I move through the space and won’t be distracted by people. For her part, she recounts to me stories about artists with whom I’m unfamiliar, shows me works I haven’t seen, while I also show her my discoveries. I’ve never bought anything with an adviser; it’s always been my personal taste. It’s rare that one buys because one “absolutely has to have a work by a certain artist.” It doesn’t happen. I’m very happy to have this photo by Nan Goldin; it had been fifteen years since I’d previously seen it and then it happened. I didn’t even have to look for it.

GG: In the collection, one big visual leap is the massive presence of zoomorphic, phytomorphic figures. It’s as if you are looking to recreate nature at home.

AM: Maybe so, but only in individual works. Paradoxically, apart from the veranda, which I consider to be outside, at home I have very few real flowers. They are all fake flowers, elaborate fakes, every kind of fakery imaginable. They possess the gift of bringing joy.

GG: But why the interest in hands — a recurring motif in your home?

AM: I’ve been pondering that lately. What you see is just the visible part of the collection. I still have many other works in boxes left over from the last move. One day they will find their place. The hand is for care and affection but also dexterity, the act of doing.

GG: You have many chairs, even these little wicker seats for children.

AM: Those chairs confirm my affinity for the world of children. I collected children’s books even before I had any children of my own: animation books, illustrated, pop-up, 3-D and lenticular postcards, furniture.

GP: In one interview you said that as a child you wanted to become an architect and to redesign the world through architecture and children’s toys.

AM: One of the jobs that I could certainly do is that of architect or designer. I imagined every detail of this house myself. I love it.

GG: Do you envisage each home having its own identity?

AM: Yes, absolutely. For instance, the new summer campaign for Missoni was devised in the house in Sardinia, where I have other collections: Southern Italian ceramics, Sardinian baskets, shells. It certainly has a Mediterranean character.

GP: Who had the idea of entrusting some advertising campaigns to artists? For instance Autumn/Winter 2011, directed by Kenneth Anger. It’s one of the best films I’ve ever seen for a fashion teaser.

AM: That was my idea. The part of his work that interested me was the texture of his videos.

GP: And a year later Anger was at the Whitney Biennial. That was the moment I became particularly interested in you. I thought you must be very connected to contemporary art in a way perhaps you don’t even realize. Have you collaborated with other artists?

AM: When James Brett’s Museum of Everything began in London in 2009, I immediately said to myself: This is my home. At that moment I started working with Juergen Teller. For some time I’d wanted to create an image like the one on the cover of Sgt. Pepper’s Lonely Hearts Club Band by The Beatles, to include family and friends. I knew I had to reach out to Peter Blake — the artist behind that famous cover — who was coincidentally, at the time, organizing an exhibition at the Museum of Everything. I couldn’t find him until I encountered Brett. At that museum, as is known, it is forbidden to take photographs; but I managed to convince Brett to authorize Juergen Teller to take pictures inside the museum, which Peter Blake was later to splice into the photomontage. From this picture I produced a lenticular postcard published in Tar magazine.

GP: Are there artists’ images to which you’ll return for a campaign?

AM: It could be successful. Certainly it has been in the past. I still remember the 1997 campaign with Mario Testino, in which we tried to create a Bloomsbury-type atmosphere.

GP: What do you think about the many fashion houses in Italy and France that are opening art foundations?

AM: It’s good. People with capital can afford to invest in these kinds of wonderful projects. We’re lucky they exist and have a vision to share with the world. We are all lucky. My parents were not industrial, and my father never subscribed to a class structure; he always wished to live humbly. Life must be lived for more than the simple accumulation of money. Nowadays, if you don’t take certain steps, you’ll struggle.

AM: A project that I’d like to accomplish before I leave the scene — or even afterward — is the opening of a Missoni Museum. We have an enormous archive, which is an asset for our country and for the history of international fashion.

(translated from Italian by Alex Estorick)