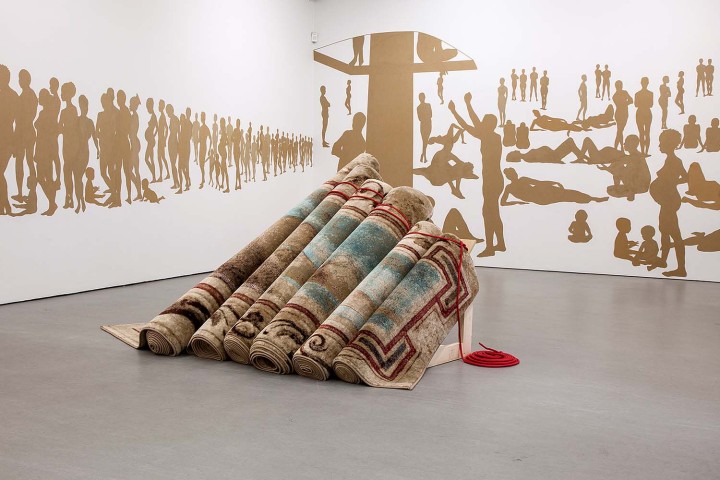 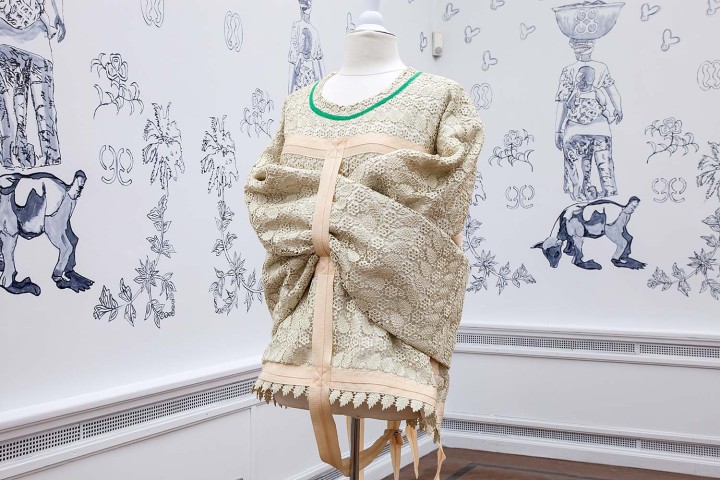 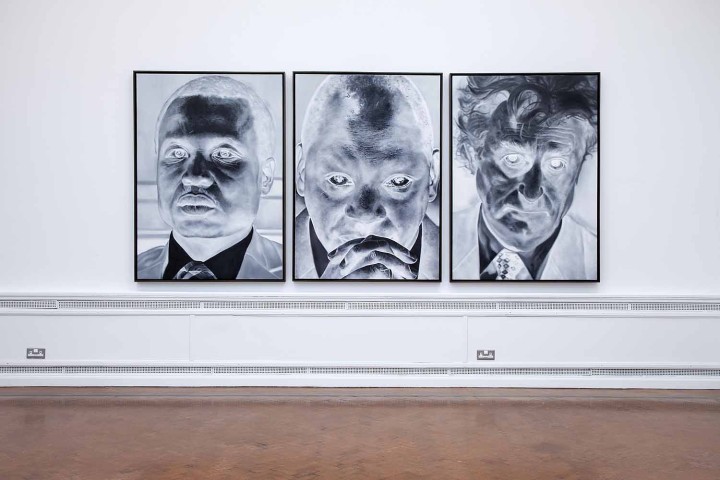 Ireland’s biennial has been in existence since 1977. This year’s iteration includes more than fifty-seven international artists and is curated by the Senegal-based Koyo Kouoh.

Marking the centenary of the 1916 Easter Rising, “Still (the) Barbarians” — titled after the poem “Waiting for the Barbarians” by the Greek writer C.P. Cavafy — investigates the postcolonial condition of Ireland, reflecting on how postcolonialism continues to shape our present sociopolitical, cultural and environmental condition. References to enduring systems of exclusion and exploitation recur throughout the biennale.

The exhibition is spread throughout the city, with two main concentrations in the Limerick City Gallery of Art and Cleeve’s Condensed Milk Factory. The latter features a vast array of video work, sequential dark and cold rooms illuminated with moving images. Arguably the most powerful work within this section is Public Studio’s six-channel video installation Road Movie (2015). Three large screens stand in the center of the space as an imposing wall, carving the room into two sections. Portraying visual aspects of the Israel-Palestine conflict, footage depicts houses, tree-lined roads, motorways and walls dividing the region. Imagery on either side of the wall differs, thus reproducing a feeling of segregation. Sound echoes throughout the vast room with voices that state: “It’s actually an existential war of Israel against Islam” and “the army refuses use of the roads.” The sociopolitical ramifications of Israel’s declaration of statehood in the postwar period of 1948 are depicted with affective strength.

A dystopian virtual reality is described in Larry Achiampong and David Blandy’s digital video Finding Fanon 1 & 2 (both 2015) — named after Frantz Fanon, a Martinique-born Afro-Caribbean philosopher, revolutionary and writer whose works are influential in the field of postcolonial studies. Two suited characters run searchingly through city docklands and concrete streets. The consolidation of wealth overshadows any potential for revolution in this digital creation, where people are described as spending their lives embedded in the “master’s plans.”

Also in the Milk Factory is Irish artist Alan Phelan’s Casement (2016), which directly addresses Ireland’s own political history, referring to the life of Roger Casement, an Anglo-Irish worker for the British Colonial Service. Knighted for his reporting on human-rights issues in Congo and Peru, he later heralded the republican cause before being executed as a result of the rising.

The quantification and analysis of acts of terrorism is the main focus of Eric Baudelaire’s FRMAWREOK FAMREWROK FRMWRAOEK FMRAEOWRK FWRREOMAK FEARMOWRK FORAMRWEK FWMAOERRK FOMARERWK FEMORWARK FMRWREAOK (2016). A wallpaper installation that stretches down an endlessly long partition, its monotone gray rectangles recall the refined language of Minimalism. The rectangles are text boxes that reproduce facsimiles of graphs, charts and data lists recording, for example, annual fatalities from Palestinian terrorism from 1978 to 1998 or international terrorist incidents and casualties from 1988 to 2003. The overwhelming mass of numbers and information dissolves into simple quadrilaterals amid an endless stream of data.

At the Limerick City Gallery of Art, immigration and the refugee crisis are a recurring reference. Mary Evan’s craft paper installation Thousands are Sailing (2016) depicts the faceless silhouettes of people in boats, moving toward nowhere to confront an uncertain future. Within the same room, Hera Büyüktasciyan’s Destroy Your Home, Build up a Boat, Save Life! (2014–15) contains rolled rugs bound together upon a wooden structure, unraveling and coming apart at the seams.

Perhaps most powerful is Philip Aguirre y Otegui’s Cabinet Mare Nostrum (2016), an installation in which blue coffin-shaped boats have been painted upon the wall, echoing and consuming the shape of the Mediterranean Sea. Drawings denoting the mass movement of people from Africa and the Middle East are presented in glass vitrines: silhouettes of people behind wire fences acting as portraits of a world in crisis.

Across the river in a freestanding mid-nineteenth-century building called The Sailor’s House, American-Korean artist Michael Joo intervened with the structure itself to present This beautiful stripped wreckage (which we investigate) (2016). Formerly a hostel for sailors, the artist approached the disused space as a corpus or body in its own right: one that needed piecing back together. With bare brick walls stripped to their most basic elements, Joo encountered a mass of timber in the barren back yard. Meticulously investigating this matter, he salvaged the building’s decaying wooden door and window frames, painstakingly piecing them back together and reinstalling them so that they hung just inches in front of their original sites, suspended on metal wires or pins.

The biennial weaves together complex and problematic histories of postcolonialism to bravely confront the humanitarian atrocities occurring in the world today. Many of these are happening on our doorsteps and within our Mediterranean seas, as people look for a route out of war-torn territories where extremist groups have prospered.